Theresa May today makes an extraordinary plea directly to the British people to back her Brexit deal.

The Prime Minister has published an impassioned letter in which she promises to campaign with her ‘heart and soul’ to persuade MPs to vote for the deal in next month’s crunch Commons showdown, which will determine her political future.

But even as Mrs May arrived in Brussels last night for a summit intended to seal the deal, she was engulfed by a fresh storm over the future of Gibraltar after the British were forced to give Spain a veto over the territory’s inclusion in any future UK-EU trade deal.

It led incandescent Tory MPs to warn that Mrs May’s already shaky grip on No 10 could be fatally weakened if she had diluted Britain’s commitment to the Rock. On another day of drama in Mrs May’s Brexit battle:

Mrs May uses today’s letter to the nation to promise that the deal she has negotiated with Brussels would lead to a ‘brighter future’, saying Brexit day ‘must mark the point when we put aside the labels of ‘Leave’ and ‘Remain’ for good and come together again as one people.’

She also says she will be ‘campaigning with my heart and soul’ to win the MPs’ vote on the deal, pencilled in for the December 11 or 12, which will determine her political future.

Mrs May also says that she is ‘determined to deliver a Brexit deal that works for every part of our country’ as well as territories such as Gibraltar.

But some Tory MPs reacted with fury after the British ambassador to the EU, Sir Tim Barrow, wrote to the Spanish to concede that Gibraltar would not necessarily be covered by a future trade deal with the EU.

He said the Withdrawal Agreement imposes no obligations regarding the ‘territorial scope’ of future agreements. The development means any deals between Brussels and the UK involving Gibraltar would require Spain’s agreement.

The move was designed to save today’s EU summit, after Spanish prime minister Pedro Sánchez threatened to veto the Brexit deal due to be signed off by European leaders. Mr Sánchez claimed the UK would now have to open talks on the ‘joint sovereignty’ of the Rock.

He claimed: ‘The European Council and the European Commission have backed Spain’s position, and backed it as never before.’

Spain’s Europe Minister Josep Borrell Fontelles risked further inflaming tensions by claiming last night’s agreement was the most important change since the Utrecht Treaty of 1713, which handed sovereignty of the Rock to the British.

Last night, Romford MP Andrew Rosindell said: ‘The Prime Minister has to show that she will be utterly true to her words that there will be no compromise on Britain’s right to defend and negotiate on behalf of Gibraltar. She must vow that Spanish attempts to use this constitutional weapon to try somehow to divide the Rock and the UK will not work.’ 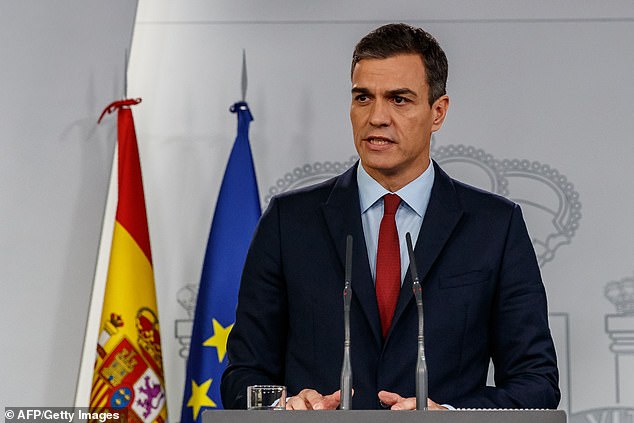 Spain’s Prime Minister Pedro Sanchez, pictured at a news conference in Madrid yesterday, withdrew his threat to boycott the EU summit on Sunday amid a row over Gibraltar 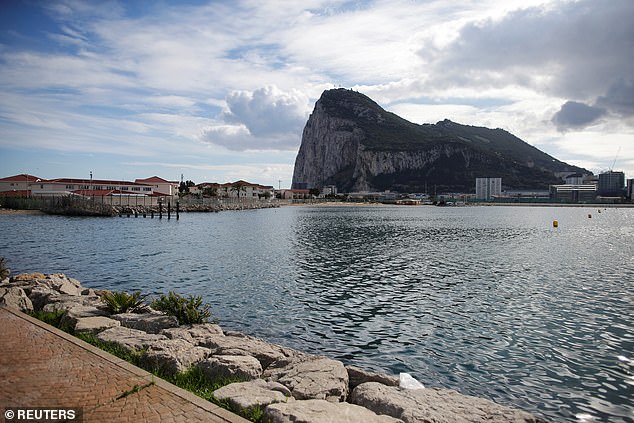 Gibraltar, pictured is a British territory claimed by Spain and a bone of contention as London negotiates a new relationship with Brussels after Brexit on March 29

Mr Rosindell directly warned Mrs May’s future could hinge on the issue, saying: ‘ If there is any sign of any backtracking or watering down on this issue, that alone will inspire huge numbers of people to lose confidence in her leadership’.

Former Deputy Commons Speaker Nigel Evans added: ‘To sell out 17.5 million people [who voted to leave the EU] with her Brexit deal is one thing, to go against the wishes of the DUP who keep us in power is another. But to sell out the utterly patriotic British people who live on Gibraltar is simply beyond the pale.’

The Tory MP added: ‘Theresa May is dining in Brussels with people who are delighted with her deal – in fact they could have written it themselves.

‘But on Monday she will return to a very different atmosphere in Westminster – one of betrayal.’

Following talks with EU president Jean-Claude Juncker ahead of today’s summit, Mrs May insisted that she would continue to ‘negotiate on behalf of the whole UK family’ and told reporters she would ‘always stand up for Gibraltar’.

But she avoided questions over the fact that the Rock risks ending up with a separate trade deal to the UK mainland.

Mrs May said: ‘The UK’s position on Gibraltar has not changed and will not change.’

‘I am campaigning with my heart and soul’: Extraordinary letter penned by Theresa May to the British people revealed as she fights to save her job

It is a letter that could seal the fate of her Premiership.

The missive Theresa May today issues to the nation is part of a Herculean effort by the Prime Minister to persuade MPs to support her Brexit deal when it comes to the Commons – and keep her in Downing Street.

With up to 90 Tory MPs threatening to vote against her deal and the DUP in open revolt over locking Northern Ireland to EU rules, Mrs May will need all her Houdini-like political skills to survive.

So No 10 has mounted a last-ditch publicity blitz over the heads of MPs, releasing pictures of Mrs May looking statesmanlike on the plane to Brussels yesterday afternoon to accompany the letter.

The furious reaction by Tory MPs to the Spanish concession – handing Spain a veto over the territory’s inclusion in a future UK-EU trade deal – reveals the intensity of opposition within the party to the number of compromises being forced on the UK to secure the EU’s approval.

They were appalled by the gloating response of Spain’s Europe Minister, Josep Borrell Fontelles, who claimed the agreement with Britain that Gibraltar would automatically be outside of the ‘territorial scope’ of the UK was the most ‘important since the Utrecht Treaty’.

Under the 1713 accord, the Spanish surrendered the sovereignty of the Rock to the British. The people of Gibraltar have twice declared overwhelmingly at the ballot box that they wish to remain a UK overseas territory.

The Tory splits run up to the Cabinet. As part of Downing Street’s plan to ‘sell’ the Brexit deal to her party, Mrs May will next week rush forward an immigration clampdown to cut the number of unskilled migrants coming to Britain from Europe if they earn under £30,000. In her letter today, Mrs May states: ‘We will take back control of our borders, by putting an end to the free movement of people once and for all. Instead of an immigration system based on where a person comes from, we will build one based on the skills and talents a person has to offer.’

But The Mail on Sunday understands that crucial elements of the Immigration White Paper have yet to be signed off by Cabinet, with Chancellor Philip Hammond and Home Secretary Sajid Javid both objecting. 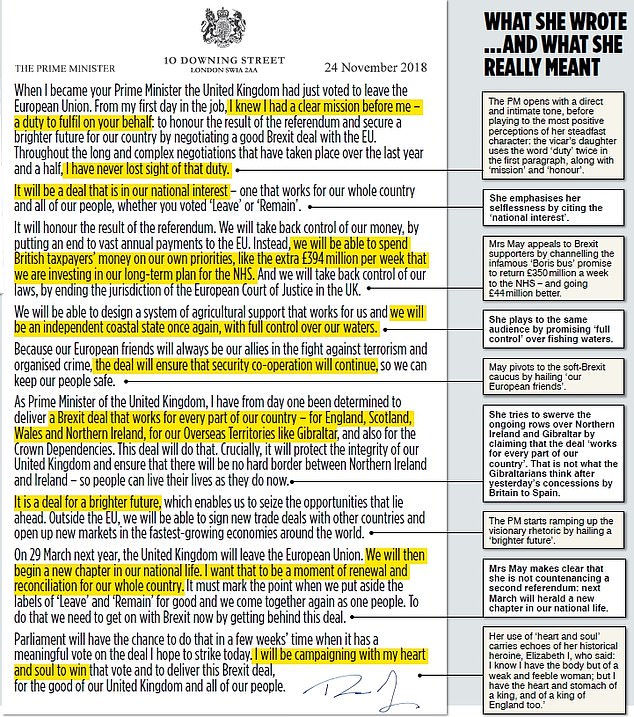 The full text of the letter penned by Theresa May to the British people as she seeks support for her Brexit deal. She is battling to persuade reluctant MPs to back her in the Commons

It is understood that Mr Hammond has warned that the clampdown would have a serious impact on house building rates.

And an ally of the Home Secretary said: ‘Sajid is much more open to immigration. For him, it is about control rather than a sweeping cut-off point’.

The White Paper was due to be published in late January before it was brought forward to take place ahead of the crunch Commons vote on Mrs May’s Brussels deal in a bid to win over Brexiteer Tory MPs.

But last night there were angry allegations swirling around Westminster that No 10 was attempting to ‘bounce’ Ministers into backing the more controversial elements of the immigration plan. One Cabinet source said: ‘This is not the sort of thing to use to try to swing a vote. It needs to be done properly.’

And Whitehall officials are deeply concerned ‘mistakes will be made’ as the usual stress testing of the document has not yet taken place, just a week before publication.

Another idea being considered in No 10 to ‘sell’ the Brexit deal is for Mrs May to challenge Labour leader Jeremy Corbyn to a public debate about her Brexit deal.

Downing Street insiders have discussed the unusual stunt, but some of Mrs May’s inner circle fear the idea could massively backfire if the Labour leader hijacked the event and confronted the PM live on air about other Government policies like Universal Credit and cuts to public services.

As part of its ‘charm offensive’ to try to win round party rebels, No 10’s chief of staff Gavin Barwell has been giving ‘pep talks’ to Ministers. 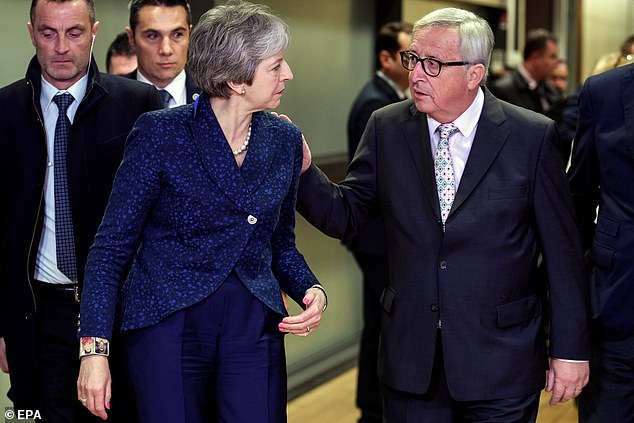 He is understood to have compared the gruelling Brexit negotiations with the EU to a football match in which ‘we are one-nil down in the first half but we’ll win in the second half’. But that has produced a withering response from Brexiteers, with former Tory leader Iain Duncan Smith telling one Cabinet Minister: ‘We are not one-nil down – we’re three-nil down in the first half and we’ve had a bunch of players sent off and we’re playing Barcelona. We’re f*****.’

Arch-Brexiteer Tories also privately blame the ‘trio’ of Cabinet Office Minister David Lidington, Hammond and Business Secretary Greg Clark for being the main obstacle to a real Brexit. One said: ‘They are the trio that literally sit in her office with her, backing and egging on [No 10 Brexit adviser] Olly Robbins. The Treasury, the Foreign Office and these three have worked like billy-o to ensure Robbins delivers this kind of Brexit.

‘The Treasury and Hammond have deliberately not done anything about No Deal. These are fifth columnists in the heart of government and the problem is, because May lacks any political nous, she just doesn’t focus on the fact she is being manipulated.

‘If the deal is voted down, I have a pretty good suspicion they won’t get to the second vote,’ they added. ‘I think people will say, you’ve got to go, you have lost the confidence of the party.’