You can’t have our £30billion, Boris Johnson will tell the EU TODAY: PM rips up Brexit divorce bill as lawyers say No Deal means the UK only owes £9billion

Boris Johnson will today throw down the gauntlet to Brussels by vowing to withhold £30 billion of our ‘divorce bill’ to punish the EU for refusing to rip up their Brexit deal.

The Prime Minister – making a combative first appearance on the international stage since entering Downing Street – is expected to tell EU leaders at the G7 summit in Biarritz that the £39 billion bill agreed by Theresa May will be cut to £9 billion – or even as little as £7 billion – by the UK.

Mr Johnson also fired a warning salvo at Donald Trump ahead of a breakfast meeting with the US President today by complaining that restrictive American rules on products such as ‘pork pies, cauliflowers and shower trays’ were a barrier to a post-Brexit trade deal between the two countries.

It came as No 10 also stoked speculation about a snap autumn election by drawing up plans to cut fuel duty to ‘put money in motorists’ pockets’. In other developments yesterday:

Mr Johnson’s threat over the divorce bill – which was agreed by former Chancellor Philip Hammond, an avowed enemy of the Prime Minister’s Brexit policy – came after No 10’s lawyers concluded that, in a No Deal scenario, the £39 billion bill should be slashed to as little as £7 billion because there would not be any of the costs associated with the transition period agreed as part of the deal.

Last week, French President Emmanuel Macron insisted that the UK should pay the full Brexit bill even if the UK leaves without a deal on October 31.

The threat comes before a formal meeting today between Mr Johnson and European Council President Donald Tusk at the G7 summit: he is also expected to hold informal meetings with Mr Macron and German Chancellor Angela Merkel. 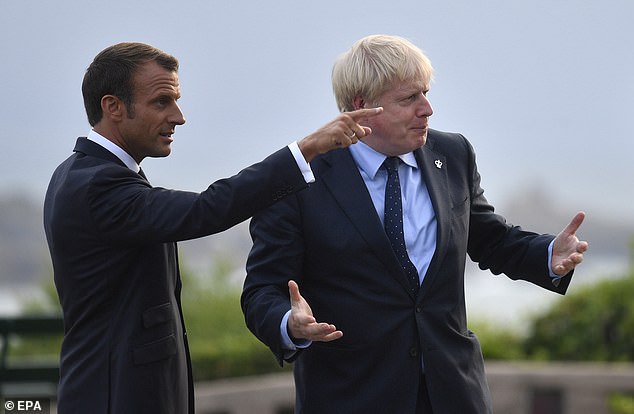 Last week, French President Emmanuel Macron insisted that the UK should pay the full Brexit bill even if the UK leaves without a deal on October 31

Yesterday, Mr Tusk warned that he would not co-operate with the UK over No Deal, saying: ‘I hope Prime Minister Johnson would not like to go down in history as Mr No Deal.’

‘If Donald Tusk doesn’t want to go down as Mr No Deal Brexit then I hope that point should be borne in mind by him too.’

Striking a cautious note ahead of his meeting today with Trump, Mr Johnson said he had warned the President in a phone call on Friday evening that while a post-Brexit trade deal with the US was a ‘massive opportunity’ it was ‘not all going to be plain sailing’.

Mr Johnson said: ‘It is very important if we are going to do a fantastic free trade deal that is a free trade that works in the interests of British business. 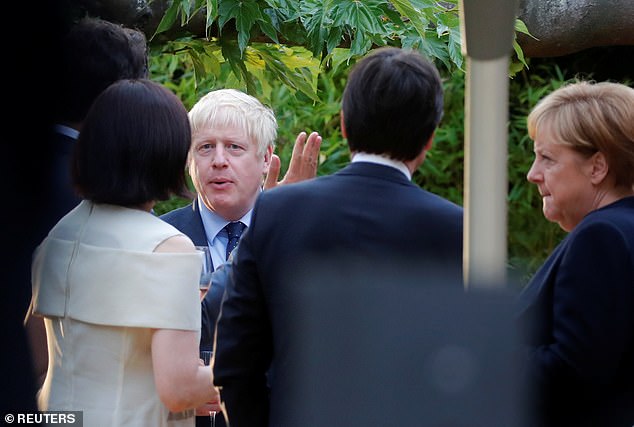 The threat comes before a formal meeting today between Mr Johnson and European Council President Donald Tusk at the G7 summit: he is also expected to hold informal meetings with Mr Macron and German Chancellor Angela Merkel (pictured with Mr Johnson earlier today)

‘There are currently restrictions on the sale of British-made shower trays to the US. We’ve sold 250,000 shower trays around the world.

‘There is some kind of bureaucratic obstacle that stops us selling them in the US because they are allegedly too low. Wallpaper, pillows and other fabrics have to be fire tested again when they arrive in the US rather than being automatically admitted.

‘There are tariffs on cars, there are tariffs on railway carriages…Melton Mowbray pork pies, which are sold in Thailand and in Iceland, are currently unable to enter the US market…Cauliflowers currently, under US Department of Agriculture restrictions, can only enter specified ports.’

Mr Johnson added: ‘We intend to seize those opportunities but they are going to require our American friends to compromise and to open up their approach because currently there are too many restrictions.’

The Prime Minister’s threat to the EU over the divorce bill will be seen as the ‘stick’ in negotiations which are also trying to find a solution to the controversial Irish backstop in the deal.

Brussels had hoped to use the £39 billion to plug a black hole in EU finances. It is also a rebuke to Mr Hammond.

A No 10 source said: ‘Boris wants to see fair terms for the UK’s exit in return for the billions we are meant to pay.’

A Government source said: ‘The PM has always said it was a huge mistake for Hammond to agree to the divorce bill before any Brexit deal had been finalised.’

The source added: ‘If there is No Deal, Brussels will need to organise a whip round – they’ll need to plug a huge hole from our contribution and they’ll need billions’ to keep Ireland afloat.’