Theresa May is to soft-pedal on demands for new EU sanctions against Russia after the first cracks emerged in European unity over the Salisbury attack.

The Prime Minister will discuss a range of new measures against Moscow when she convenes her National Security Council today.

Possible moves, which could be announced as early as today, include the expulsion of more diplomats and the closure of a Russian trade outpost in London seen as a front for espionage.

Ministers are also looking at ‘new legislation to make it hard for those who wish to do damage to our country’.

But Government sources played down the prospect of an early push for fresh EU sanctions, despite messages of support from Angela Merkel, Emmanuel Macron and EU Council president Donald Tusk. The first signs of tension in EU ranks emerged yesterday as foreign ministers meeting in Brussels failed to sign off a statement laying blame for the nerve agent attack firmly at Moscow’s door.

The final statement condemned the poisoning of ex-spy Sergei Skripal and his daughter Yulia and offered the UK ‘unqualified support and solidarity’. But on the question of Moscow’s involvement, it said only that signatories took the UK’s position ‘extremely seriously’.

EU foreign minister Federica Mogherini suggested some EU countries did not fully trust UK intelligence agencies on the issue. Asked why the wording of the statement was weaker than those previously issued by countries such as the US, France and Germany, she said: ‘Maybe because different countries have different relationships to UK intelligence.’

German chancellor Mrs Merkel signed a joint statement with US president Donald Trump and French leader Mr Macron last week, saying Russia’s use of a nerve agent in Britain ‘threatens the security of us all’. 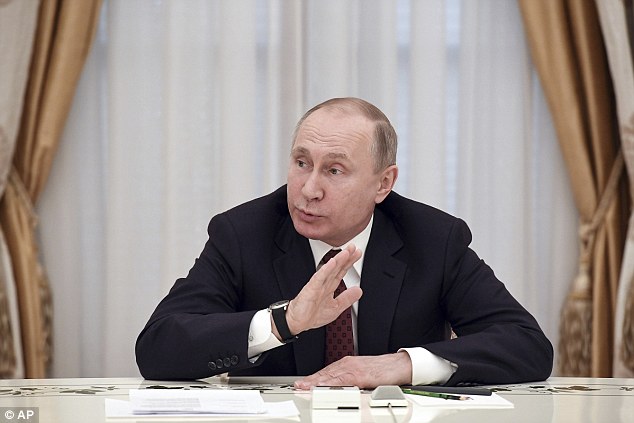 British sources said Greece, which has strong links to Russia, were one of the EU members that refused to place the blame for the Salisbury nerve agent with Moscow directly

But her foreign minister Heiko Maas raised doubts about German solidarity on the issue, describing the Salisbury incident as a ‘bilateral issue’ between the UK and Russia. Mr Maas said it was vital to ‘stay in dialogue’ with the Kremlin about the poisoning.

But they suggested it was too early for fresh EU sanctions, with some countries wanting to see results of tests by the Organisation for the Prohibition of Chemical Weapons first.

OPCW inspectors arrived in the UK yesterday to discuss transporting samples of the Novichok nerve agent to independent laboratories outside Britain. Ministers fear the tests could take weeks, or even months, to agree.

The EU’s response to the attack will be discussed in Brussels on Thursday, where Mrs May will brief fellow leaders.

A diplomatic source said: ‘It’s going to take time. Everyone is supportive but what we saw with Greece today was a reminder of how difficult it will be to move to sanctions.’

Boris Johnson dismissed Russian denials of responsibility as ‘increasingly absurd’. Ahead of talks with his EU counterparts, the Foreign Secretary said: ‘This is a classic Russian strategy of trying to conceal the needle of truth in a haystack of lies and obfuscation. They’re not fooling anybody any more.’

A senior British official said ‘further options remain on the table – economic, diplomatic, legislative, and our security capabilities can all be brought to bear if needed’.

Mr Johnson said there were actions that Britain could take with its allies, including ‘going after the money that has been illicitly and corruptly obtained’.

Why has it taken 15 days to seize car that picked up spy daughter?

Detectives were accused of bungling the poisoning investigation after they waited two weeks to remove a car that may have been contaminated with nerve agent.

Soldiers in hazmat suits swooped on a village near Salisbury yesterday to take the vehicle, which collected Sergei Skripal’s daughter Yulia from Heathrow, for testing.

Cordons were put up in Durrington, ten miles north of the Wiltshire city, as the car was painstakingly moved on to an Army low-loader. Investigators are still looking at whether Miss Skripal, 33, unknowingly brought the Novichok poison to the UK.

Family friend Ross Cassidy, 61, confirmed his silver pick-up truck was seized from his workplace, Cemex concrete plant. Friends revealed he is fuming that the 4×4 has been left unchecked for two weeks, while he has continued to drive it.

The Isuzu D-Max pick-up was taken to Porton Down, where ambulances, police cars and a recovery truck are being tested.

Mr Cassidy’s step-son Russell Loveridge, 37, said: ‘It’s a farce … It was the first car they were in this country and it’s the last car the police have taken away. Ross has been driving it for 15 days.’

A friend added: ‘It makes no sense. They’ve taken the flowers from [Mrs Skripal’s] grave but not checked the car she [Miss Skripal] came in? … Who is running this show?’

After he romped home with 77 per cent of the vote on Sunday, Mr Putin was accused of flouting international standards and political freedoms.

An EU spokesman called on Russia to ‘address the violations and shortcomings’ reported by official election observers.

Following his re-election Mr Putin flexed his nationalist muscles, saying he will defend Russia’s interests during his six-year term – but without an arms race. He said he would scale back military spending and focus on raising living standards.

‘We have no intention of engaging in some kind of arms race,’ Mr Putin said. ‘Just the opposite, we will seek to develop constructive relations with other countries. We will do all we can to solve all disputes with our partners using political and diplomatic means.’

His support at the ballot box, accompanied by a heavy turnout at 67 per cent, marked his best electoral performance. In 2012 the president, who has led Russia since 1999, won 64 per cent of the vote.