Attorneys for Virginia Roberts Giuffre said Judge Loretta Preska should publicly release material from the 2015 civil lawsuit she filed against Maxwell that include references to eight anonymous John Does.

Six have objected to the unsealing.

According to the filings, John Doe 17 complained that being associated with the case would cause him ‘annoyance and embarrassment.

Another John Doe, number 151, claimed that they were ‘trying to live a private life’ and that disclosure meant they would be ‘hounded’ by the media. 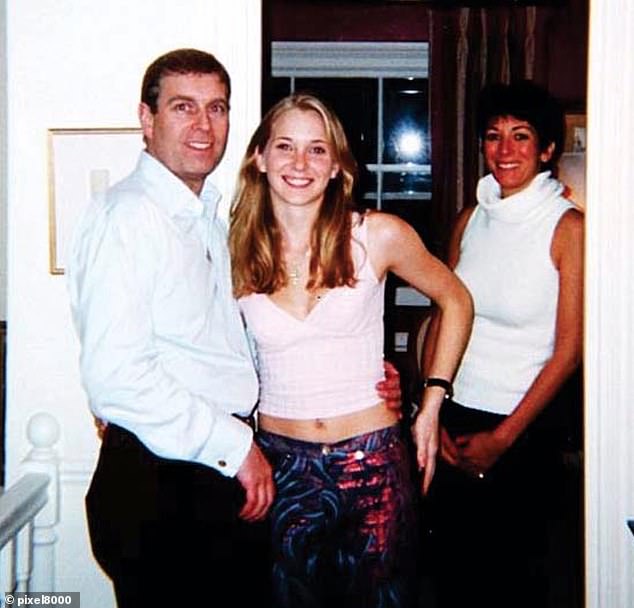 Prince Andrew is seen with his arm around Virginia Roberts while Ghislaine Maxwell stands in the background, in a now infamous photo from early 2001

The request to make the documents public came on the day that Judge Lewis Kaplan ruled that Giuffre’s battery lawsuit against Andrew, a separate case also filed at the federal court in New York, can move forward.

If Judge Preska decides to unseal the documents in Giuffre’s case, they could shed new light on the Duke’s dealings with Maxwell and Epstein.

Preska is the judge who presided over a defamation lawsuit that Giuffre filed against Maxwell in 2015 for calling her a liar.

The case was settled with confidential terms but the judge has slowly been approving the release of hundreds of documents in the case after applications from media organizations.

In her letter to the judge, Giuffre’s lawyer Sigrid McCawley said that they were following the court’s instructions to ‘streamline’ the process of making the documents public.

The numerous parties mentioned in the documents met in October and agreed to split the ‘objecting non-parties into groups’ and address the objections of the John Does first.

But upon review, McCawley said it is ‘apparent that their objections essentially mirror objections to unsealing that this Court has already rejected: that unsealing certain documents might be embarrassing, would expose non-parties to media attention, and could result in some unfortunate association between the non-parties and Jeffrey Epstein or Ghislaine Maxwell.’ 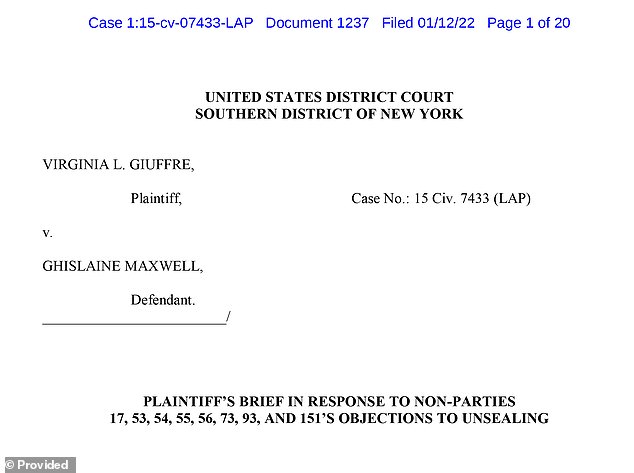 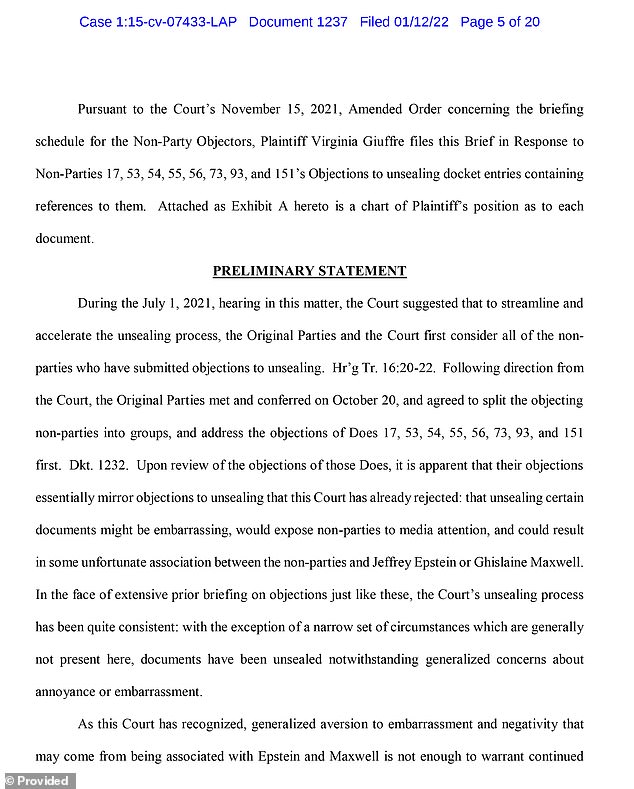 ‘In the face of extensive prior briefing on objections just like these, the court’s unsealing process has been quite consistent: with the exception of a narrow set of circumstances which are generally not present here, documents have been unsealed.’

McCawley added that ‘generalized aversion to embarrassment and negativity’ from being associated with the case was not enough to keep the documents private.

That was especially true given the ‘great public interest’ and the fact that Maxwell’s trial for recruiting and trafficking underage girls has now finished – she was found guilty and faces 65 years in jail.

McCawley wrote: ‘Now that Maxwell’s criminal trial has come and gone, there is little reason to retain protection over the vast swaths of information about Epstein and Maxwell’s sex-trafficking operation that were originally filed under seal in this case.’

The letter stated that people testified in court about matters which are under seal in the case at issue, the defamation matter.

McCawley wrote that the ‘abundance of public information now widely available about Epstein and Maxwell’s scheme through the thousands of pages of publicly available trial transcripts cuts against any continued sealing in this case.’

Turning to each of the John Does, the letter states that John Doe 17 is mentioned in four documents and objects to his name being made public.

Maxwell, who is said to have been Epstein’s madam as well as his one-time girlfriend, is seen posing with the pedophile in evidence photos shown in court. Giuffre’s lawyers argue that ‘there is little reason to retain protection’ over the seal documents now that Maxwell’s criminal trial is over

McCawley wrote that his objection is that ‘if (the material) is allowed to be made public, (it) will cause them, to say the least, annoyance and embarrassment.’

It would also cause the individual ‘severe anxiety and distress,’ and ‘extreme personal, physical and reputational harm.’

McCawley said that the Doe did not cite any legal authority and the documents should be unsealed.

Does 53 and 54 do not oppose unsealing so the documents relating to them should be released, the letter stated.

Does 55 and 56 object to their names being made public because they claim a deposition in which they are mentioned is ‘unreliable’, the letter states.

McCawley argued this was not grounds to keep the material private.

John Doe 73 argues against unsealing because of a ‘general aversion’ to being associated with Maxwell and Epstein and disclosure could cause ‘substantial embarrassment.’

Doe 93 claims that documents which mention them have ‘no relevance’ to the matters at hand and could be seen as ‘salacious’.

Doe 141 is mentioned the most of all and appears in 47 documents.

According to McCawley’s letter, Doe claims they are ‘trying to live a private life and do not want any attention stemming from disclosure.’ 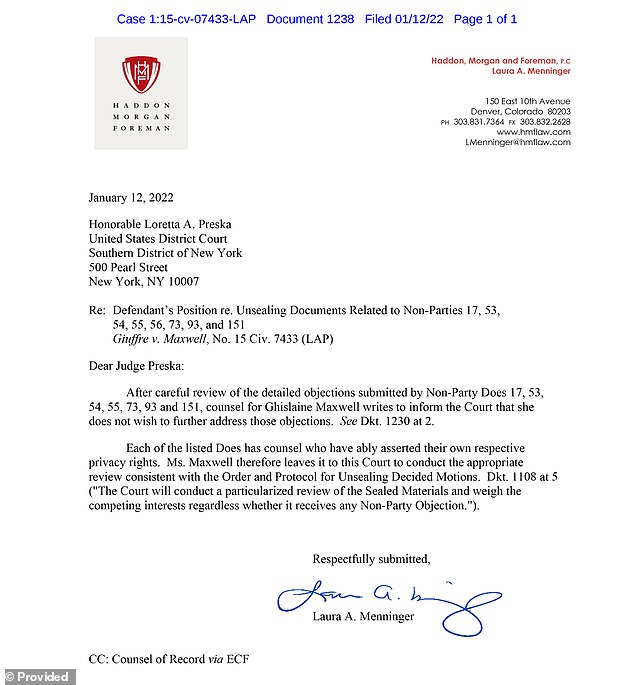 In a letter to Judge Preska, Maxwell’s attorney Laura Menninger said her client will leave it to the court to determine whether the motions should be unsealed

They claim they will be ‘hounded and pursued but he media for comment and elaboration.’

McCawley says this is not grounds for keeping the documents sealed and notes that the material has already been widely reported in the media and part has been unsealed.

The individual’s involvement in the case had also been reported already and they have already been contacted by the media and declined to comment.

In her battery lawsuit against Andrew, Giuffre claims that she was forced to have sex with him three times when she was 17 after Epstein told her to do so.

Andrew has strongly and repeatedly denied the claims, calling them ‘baseless’ in his response and that they are designed to get a ‘payday’ from him.

In his ruling allowing the case to continue, Judge Kaplan rejected Andrew’s argument that a settlement Giuffre signed with Epstein in 2009 to settle a civil case against him should be grounds for dismissal.

The case now moves into the discovery phase where each side exchanges documents and depositions are taken, including that of the Duke himself.

Judge Preska has been unsealing such material in the defamation case and it gives an insight into what is in store for the Duke in the coming months.

The documents include a deposition from Giuffre and Johanna Sjoberg who claims she was in the room when Andrew groped Giuffre’s breast at Epstein’s New York mansion in 2001.

The documents have also included emails that Andrew sent to Maxwell in January 2015 after Giuffre claimed for the first time that she had had sex with him.

The Duke messaged Maxwell: ‘Let me know when we can talk. Got some specific questions to ask you about Virginia Roberts,’ referring to Giuffre’s maiden name.

Maxwell responded: ‘Have some info. Call me when you have a moment.’