The Duchess of Cornwall kept her cool today while meeting with air ambulance staff who were forced to cut their meeting short to dash away to an emergency.

Camilla, 73, who is currently enjoying a three day visit to Cornwall with Prince Charles, 71, appeared in high spirits as she met with paramedics while unveiling a new air ambulance named in her honour.

The naming ceremony for the new £7.5million chopper for Cornwall Air Ambulance Trust was briefly interrupted by an alarm sounding alerting paramedics to an emergency call-out, with the Duchess saying she was keeping her ‘fingers crossed’ for the injured patient.

The day of engagements kick-starts the couple’s annual tour of Devon and Cornwall, which they had been keen to proceed with despite the ongoing coronavirus pandemic.

The Duchess of Cornwall, 73, was able to keep a cool head today after paramedics at the Cornwall Air Ambulance Trust’s base were forced to dash off to an emergency 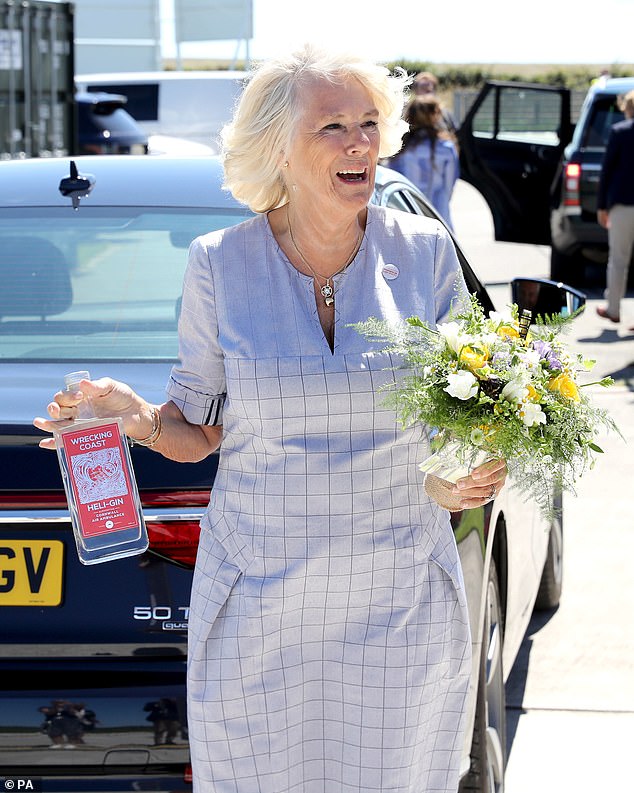 The Duchess of Cornwall, who was gifted a bottle of gin and a posey of flowers during her visit, appeared unfazed by the emergency

During the visit to  Cornwall Air Ambulance Trust’s base in Newquay, two paramedics, who lined-up to show Camilla their top-of-the range chopper, made their apologies and took to the skies.

Camilla said: ‘Oh you have to go, of course. Not in this one? This always happens.’

The call-out was a patient 20-miles away in Falmouth who had suffered head injuries and a seizure.

On hearing the news the unruffled duchess added: ‘Fingers crossed.’ 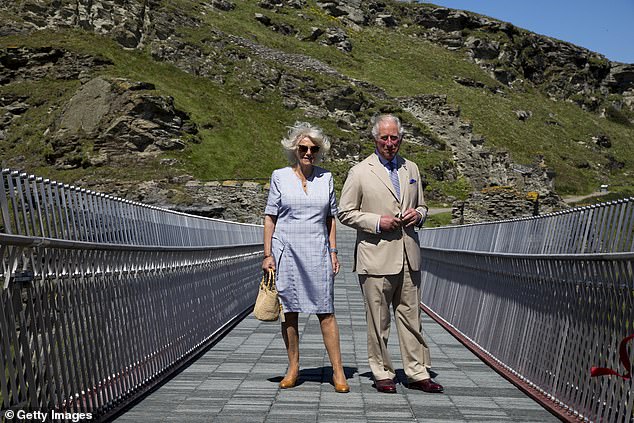 The Duchess has been the trust’s patron since 2010 and opened the base in Newquay two years later.

The trust is the oldest air ambulance in the UK after launching 33 years ago.

It comes amid a busy visit to the dukedom for the Duchess, who was joined by Prince Charles earlier today to explore King Arthur’s Tintagel castle.

The Duchess donned a smart blue dress for the occasion with a pair of summery tan shoes and added a pair of dark sunglasses to shield her eyes from the sun. 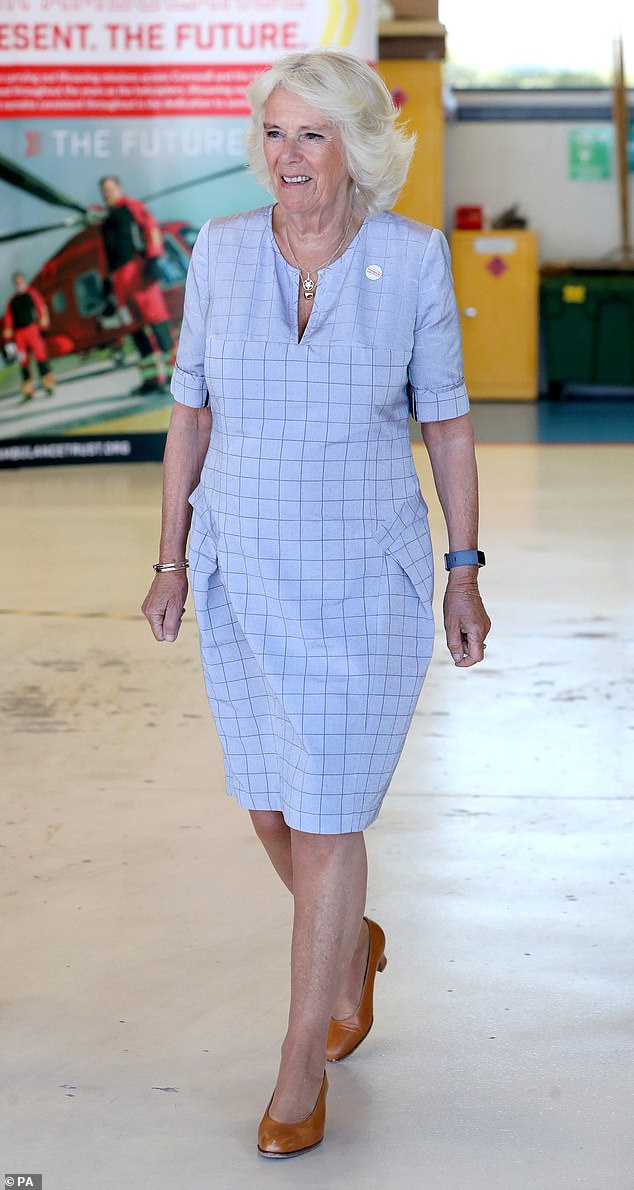 Camilla donned a smart blue tunic dress for the occasion with a trendy checked pattern, pairing the look with smart tan heels 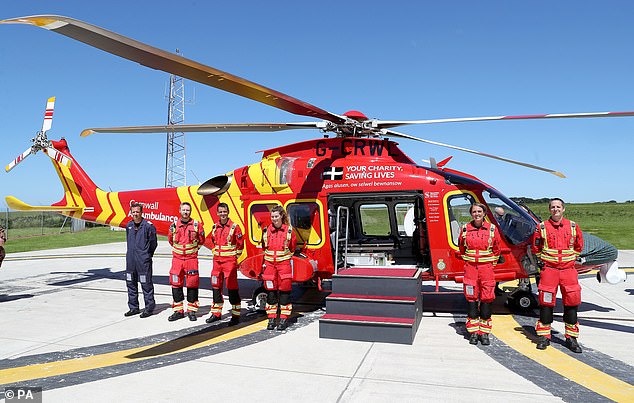 Her blonde bob was styled in an impeccable blow-dry, and she sported a dash of blush for a healthy glow.

She wrapped a white pashmina around her shoulders at one stage of the visit as the couple walked up to visit the ruins of the castle.

During their visit the royals met architects responsible for the design, who discussed the ‘logistically challenging’ feat of using helicopters to lift the two 98ft pieces of the bridge together.

The two independent cantilevers meet almost in the middle, though a small gap has been left to represent the transition from the island to the mainland and from past to present. 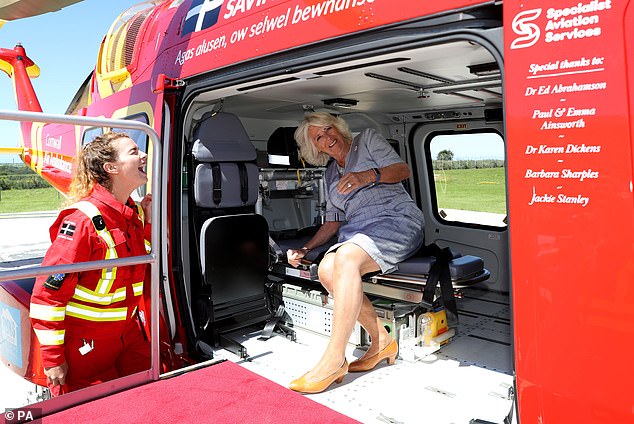 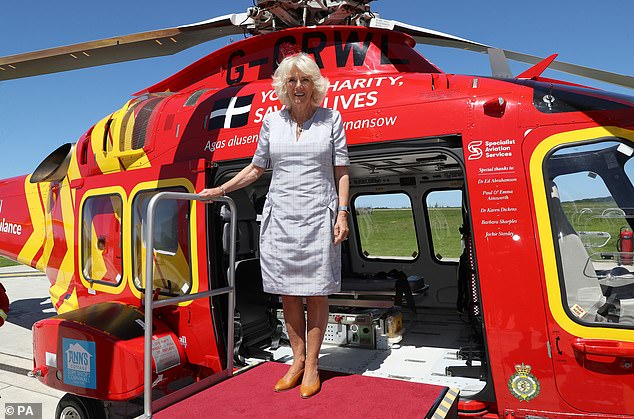 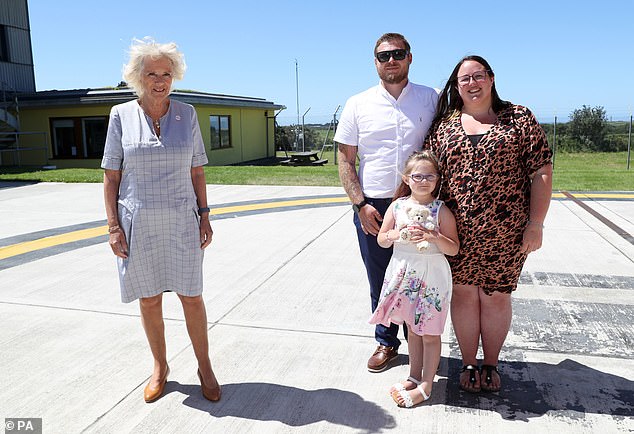 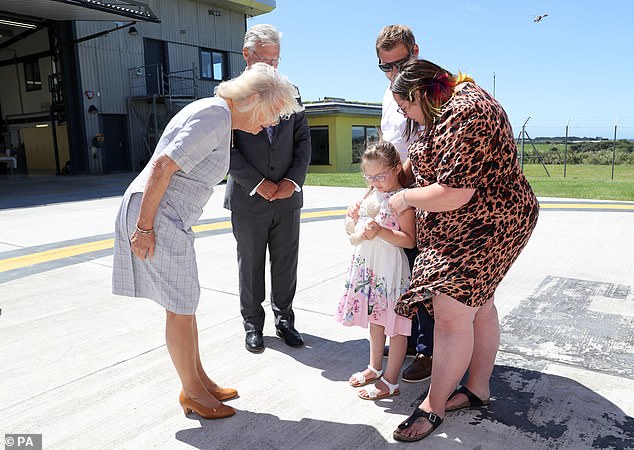 The Duchess bowed slightly while speaking to Leya Raper, six, who was airlifted as a baby, and her parents Dan Raper and Casey Raper during a visit to Cornwall Air Ambulance Trust’s base in Newquay

After a momentary struggle with the scissors, the pair cut the red ribbon officially opening the site before making their way along it.

A rather nervous Camilla made sure to link arms with her husband after joking with staff that she ‘had a great head for heights’.

As they made their way along the crossing the Duchess told her husband ‘I’m not looking down, I’m looking above’.

After safely making it across to the other side, the couple were given the opportunity to take in glorious sea views from the attraction’s viewing point. 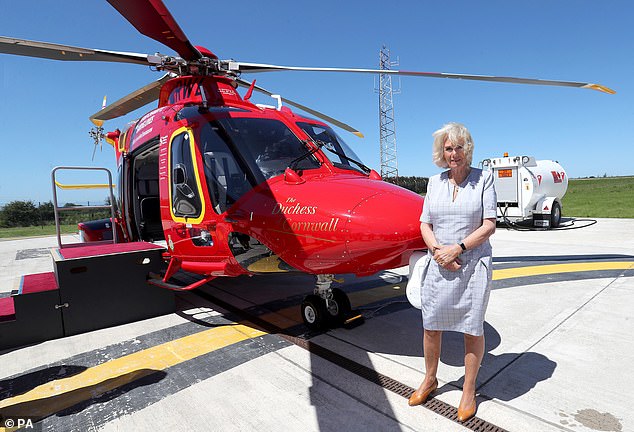 Making their way up a steep cobbled hill they stopped to take it all in, with Camilla remarking ‘It’s so beautiful’.

Despite the glorious sunshine the Duchess was left a little windswept as her hair and pashmina battled gusts on the cliff top.

On their way back down the coupled signed slates to insert into the bridge – which is currently holding 40,000 of them, many signed by local donors. Both signed their names and the date onto the Cornish slate.

Tintagel Castle is one of more than 270 ancient monuments scheduled by English Heritage across the Duchy. Stepped in legend and mystery it is said to be the birthplace of King Arthur. 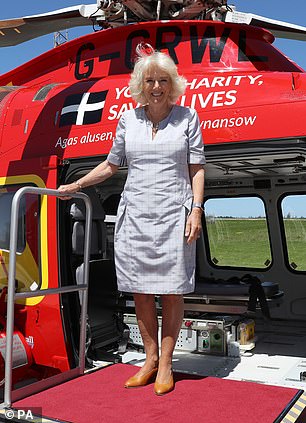 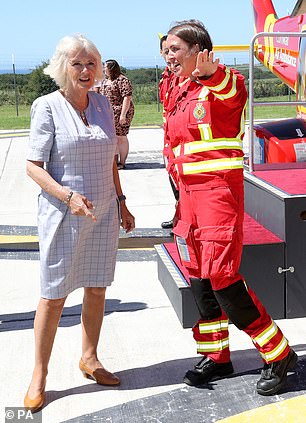 After posing for snaps with the helicopter and meeting with paramedics, a siren went off in the base, with emergency workers explaining how some staff would be dashing off to assist 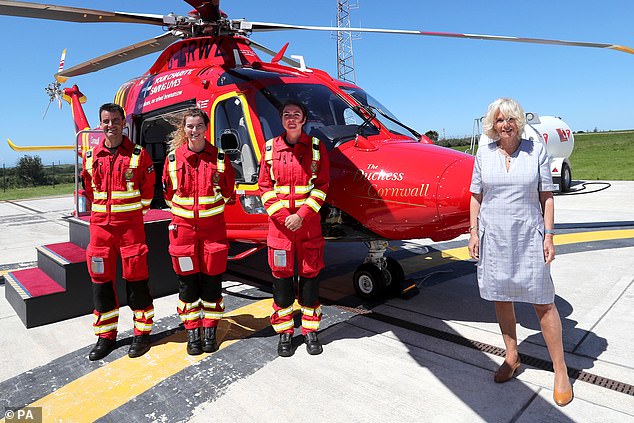 The original bridge to the site was exceedingly narrow, which it was claimed was so that three knights could have defended Tintagel Castle against an entire kingdom.

But the link collapsed in the 15th or 16th centuries meaning tourists were confronted with a demanding trek up and down a steep path in order to access the castle.

The sleek new bridge of steel, oak and Cornish slate over a 190ft gorge was built as part of a £5million redevelopment of the site and opened to visitors in August 2019.

Around 1,000 members of the public donated to the project and Julia and Hans Rausing donated £2.5million – the biggest ever private donation English Heritage had ever received. 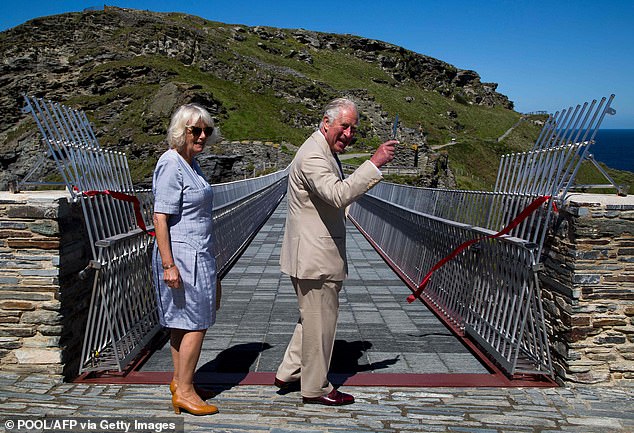 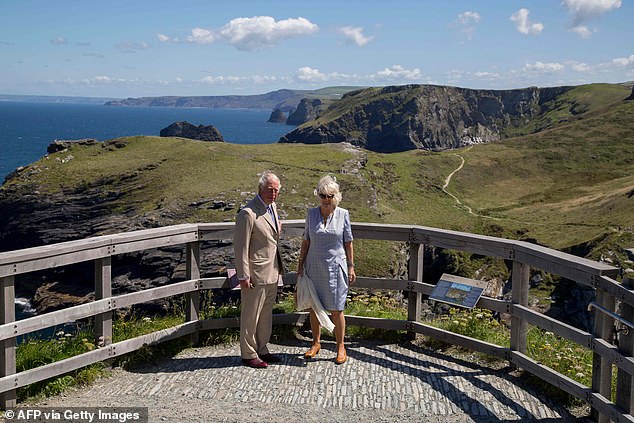 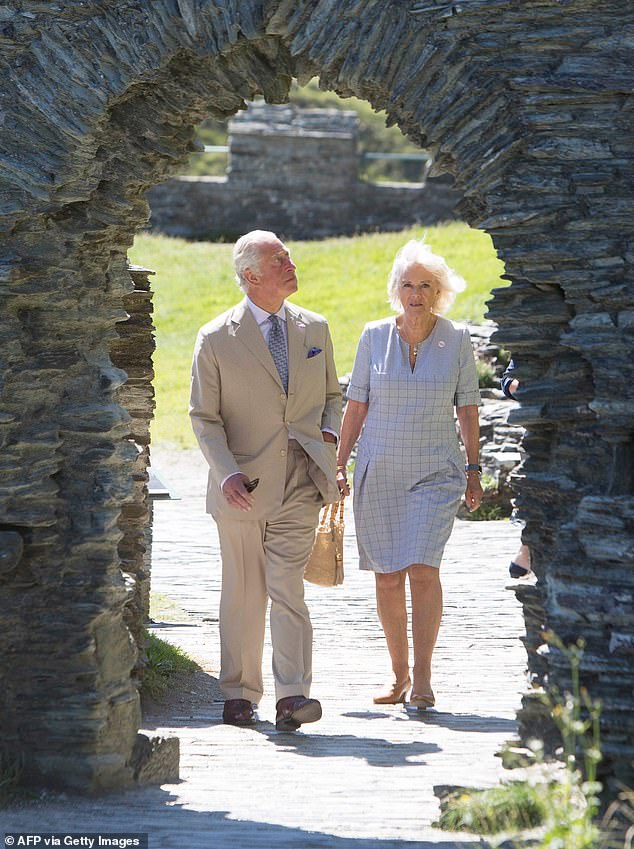 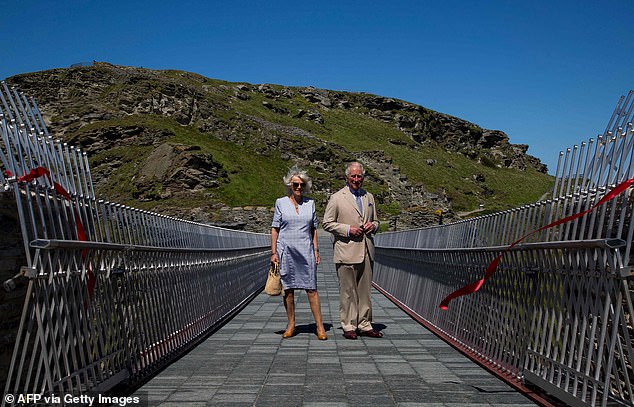 The couple beamed while posing for a photograph after officially opening the Tintagel bridge, which is set over a 190ft gorge 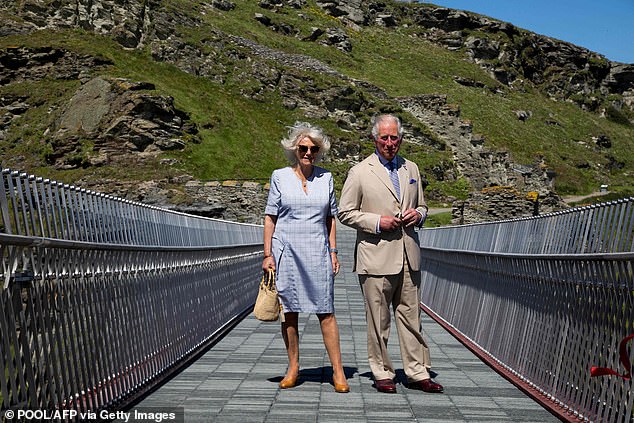 Prince Charles and Camilla appeared in high spirits as they walked across the new Tintagel bridge, which connects the medieval castle to the mainland

The bridge follows the line of the original route between the 13th-century gatehouse on the mainland and the courtyard on the jagged headland or island jutting into the sea.

Tintagel Castle belongs to the Duchy of Cornwall and was placed into State Guardianship in 1931, though today it is cared for by English Heritage.

Camilla, who has been married to the Prince of Wales for 15 years, spent the day with her family at Raymill, her private Wiltshire home. 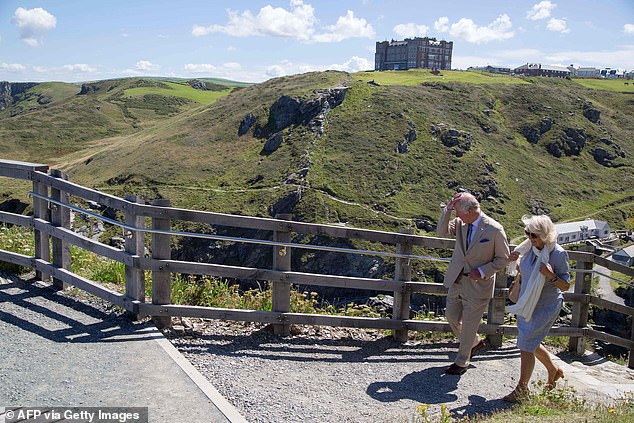 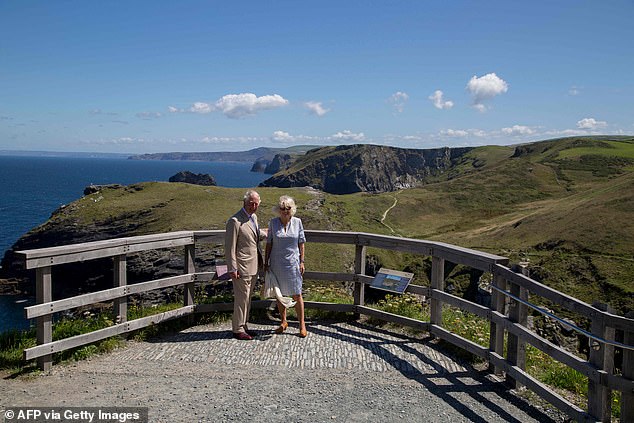 She has spoken of how much she has been enjoying seeing her grandchildren – although not touching them yet – after returning from Scotland where she spent lockdown.

The Duchess is now back doing a limited number of socially-distanced public engagements.

She spent the day before her birthday in London, where she paid tribute to the Chelsea Pensioners who lost their lives during the coronavirus pandemic on a visit to their London home. 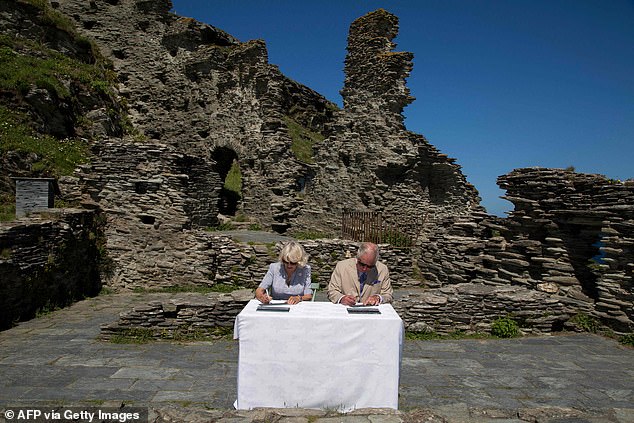 Tintagel Castle is a medieval fortification located on the peninsula of Tintagel Island, close to the village of Tintagel in Cornwall, England.

The castle has a long association with the Arthurian legends, going back to the 12th century.

In the Historia Regum Britanniae, a fictional account of British history written by Geoffrey of Monmouth, Tintagel is described as the place where Arthur was conceived.

According to the tale, Arthur’s father, King Uther Pendragon, was disguised by Merlin’s sorcery to look like Gorlois, Duke of Cornwall and the husband of Ygerna, Arthur’s mother.

The book was extremely popular and other Arthurian tales were produced in the late medieval period which claimed the king was actually born at Tintagel. Merlin the magician was also said to live below the castle in a cave.