The Duchess of Cornwall revealed she is looking forward to leaving her facemask at home as she told a Welsh college student: ‘I can’t wait to get rid of these’.

Camilla, 73, made the comment as she and the Prince of Wales, 72, visited the Royal Welsh College of Music and Drama to learn how staff and students have coped during the pandemic on day three of their week-long visit to Wales.

When the royal couple first arrived at the newly restored heritage centre, they met students and staff in the college’s foyer and the duchess told William Pearson, studying for an MA in advanced opera performance ‘I can’t wait to get rid of this’ and touched her face mask.

The royal, who put on a stylish display in a white and black patterned dress, was also spotted with a Fitbit Charge 4 Fitness Tracker on her wrist, which helps wearers track their efforts to stay in shape.

The Duchess of Cornwall with puppeteer Ruby Brown during a visit to the Royal Welsh College of Music and Drama in Cardiff, as part of a week long tour of Wales for Wales Week 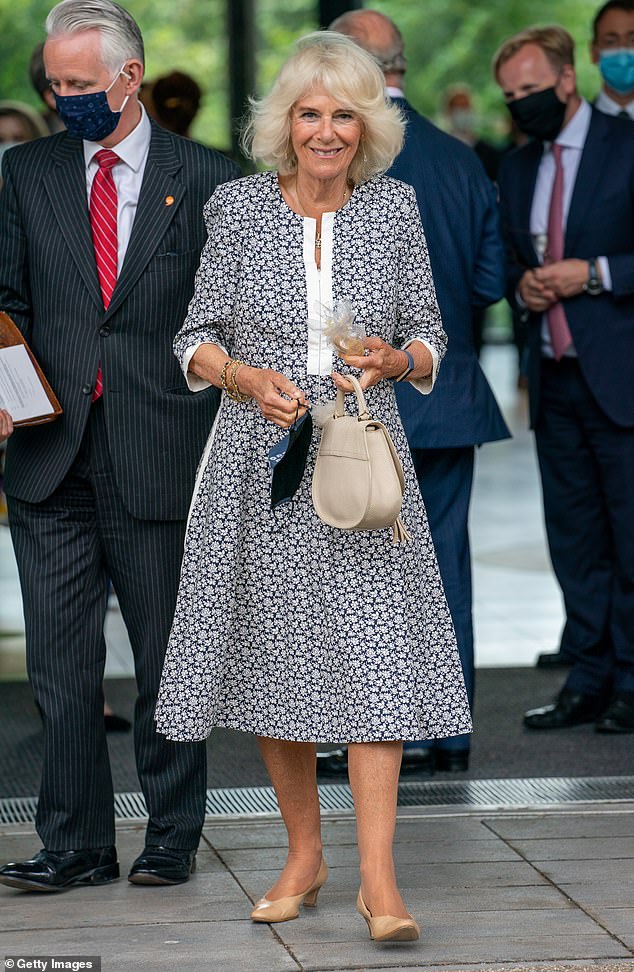 The Duchess of Cornwall revealed she is looking forward to leaving her facemask at home as she told a Welsh college student: ‘I can’t wait to get rid of these’

The gadget costs around £130 and has proved popular with those wanting to keep in shape during the lockdown, allowing users to monitor everything from heart rate to calories.

Charles and Camilla were treated to performances of music and drama by the talented students who, with the help of lecturers and tutors, have managed to continue their studies at the Cardiff-based college despite Covid restrictions.

Zoe Goriely, 24, who completes an MA in acting this month, gave a heartfelt performance of a scene from Shakespeare’s The Two Gentlemen of Verona.

In the solo scene she played the character of a maid who teases her teenage ward about a love letter the young girl has received from an admirer, and at one point stamps on the pages of the note. 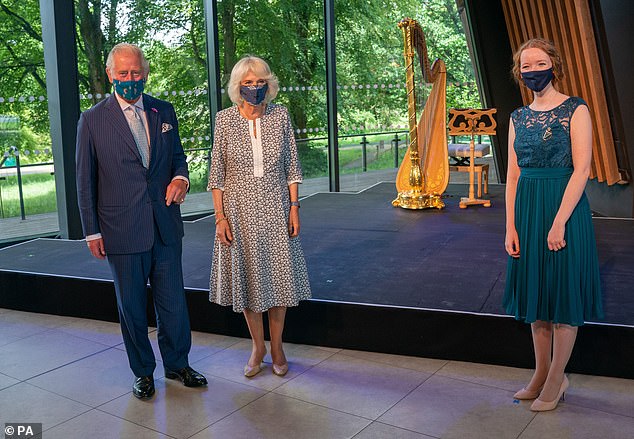 The Prince of Wales and the Duchess of Cornwall with his Official Harpist, Alis Huws (pictured) 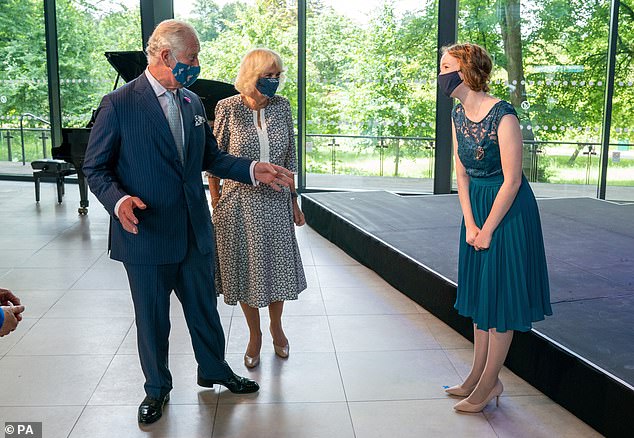 Prince Charles put on a dapper display in a navy pinstriped suit which he paired with smart shoes. Pictured, with his Official Harpist, Alis Huws 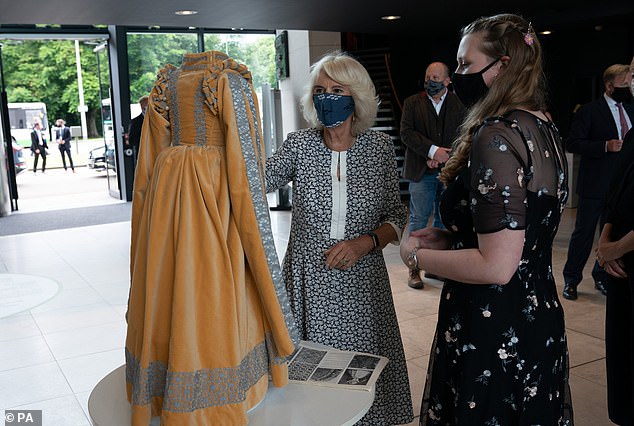 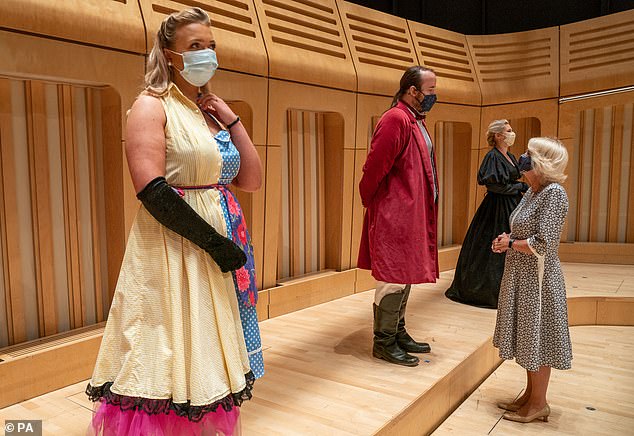 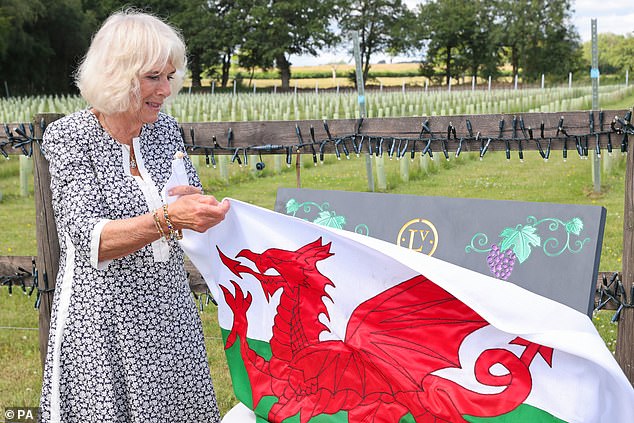 The Duchess of Cornwall, President of Wine GB, unveils a plaque during a visit marking the 10th anniversary of the Llanerch Vineyard in Pontyclun

The 24-year-old spoke to the prince and his wife after the performance and said later: ‘It’s lovely to be able to do what we love to do, for people who love what we do.’

Charles’ official harpist Alis Huws, who is a graduate of the college, also gave a performance before the royal couple met opera students in costume.

The prince is the college’s president and while he held a private meeting with senior executives the duchess watched a brief scene from The Flying Bedroom – an immersive children’s theatre production from a new company of music, composition and design students from the college.

As Ruby Brown cradled a puppet she chatted to Camilla who said about the performance ‘It’s brilliant’ adding: ‘I think it’s a lovely thing to do, you’re a really clever lady.’

The group of students who began working together via video calls are due to perform their show at Theatr Clwyd in north Wales in July and tour schools in the region in September.

During their visit, Prince Charles and the Duchess of Cornwall shared a sweet moment before trying their hand at archery.

The couple were photographed sharing a joke and looking lovingly at each other before trying their hand at archery after a quick lesson from archer, Bob Bannister.

Later, The Duchess of Cornwall praised the British wine industry and said she was glad it was ‘giving the French a run for its money’. 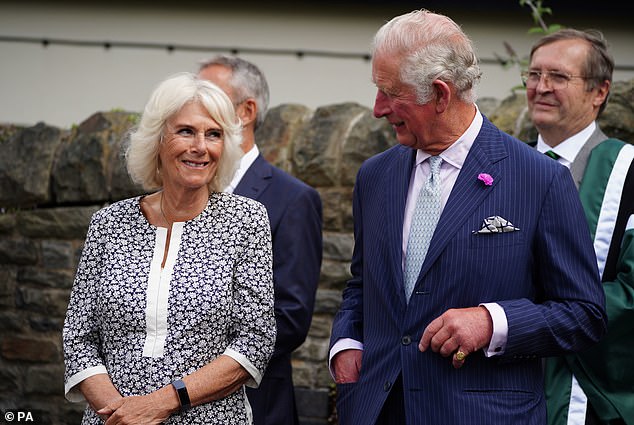 Prince Charles, 72, and the Duchess of Cornwall, 73, looked in high spirits as they visited the newly restored Llantrisant Guildhall Heritage and Visitors’ Centre in Llantrisant, Glamorgan on Wednesday 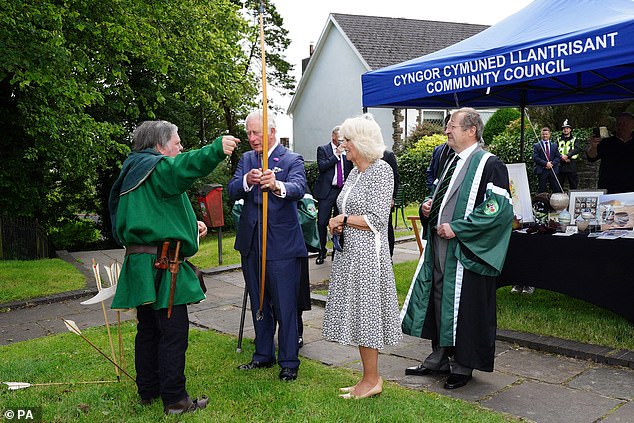 Charles tried his hand at archery and was photographed holding a bow while speaking with archer, Bob Bannister 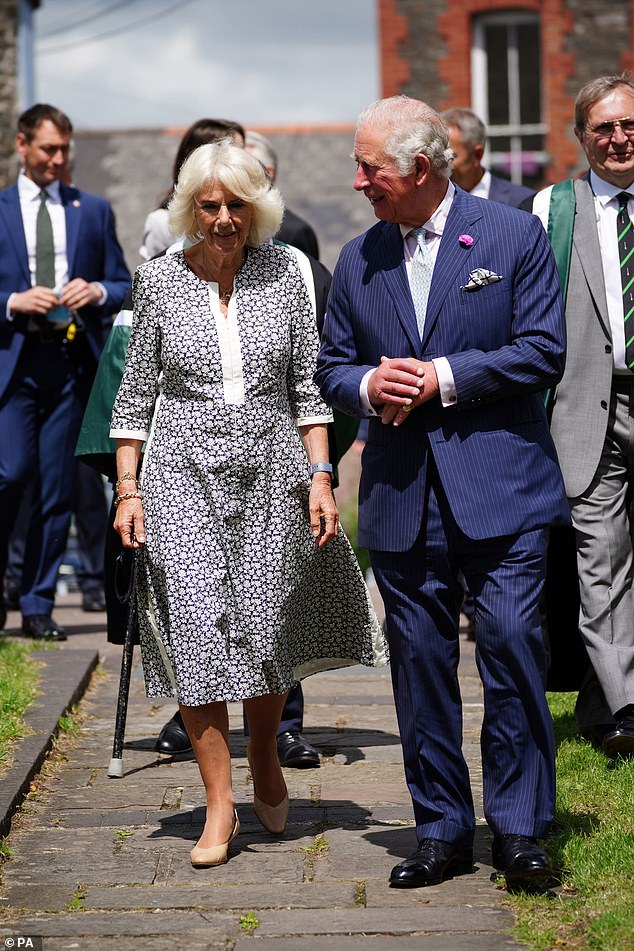 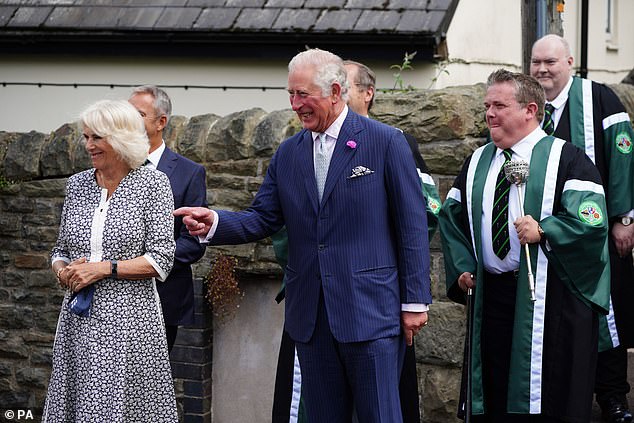 The visit marked part of Wales Week, which will see the couple travel across the country (pictured, today) 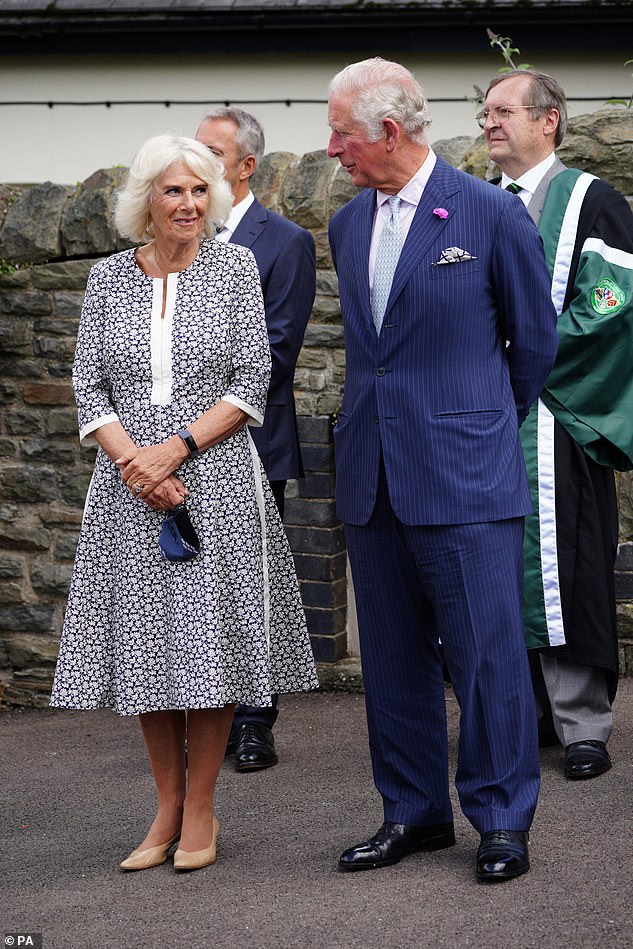 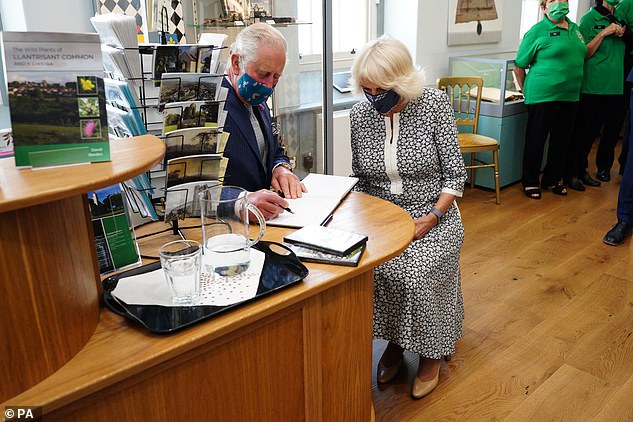 Camilla was visiting the stunning Llanerch Vineyward in Pontyclun, South Wales, in her role as president of GB Wines.

The royal, whose beloved later father, Bruce Shand, worked in the wine industry, also sipped a glass of their award-winning sparking Cariad blush and declared it ‘fantastic’.

She had met the vineyard’s owner, Ryan Davies, at Buckingham Palace previously and had promised to visit when she was in the area next.

Good to her word, Camilla insisted on stopping off today she and her husband were in South Wales for their annual ‘Wales Week.’

She was presented with posies on arrival by Mr Davies’ two daughters, Holly, 18 months, and three-year-old Lilia.

After dashing in for a quick bite to eat in the vineyard’s new restaurant and viewing its hotel, she meet with a range of local producers who supply it with everything from milk to coffee and free-range eggs.

She also admired its wedding facilities and praised Mr Davies, 34, who bought the vineyard when it was in receivership ten years ago and has worked his fingers to the bone to turn it into a thriving business, producing 12,000 bottles upwards a year of Cariad – meaning love in Welsh – sparking wine and rose.

Mr Davies explained to her that he was a geologist and entrepreneur by trade and took a huge risk taking over the estate – the oldest vineyard in Wales – at the age of just 24. 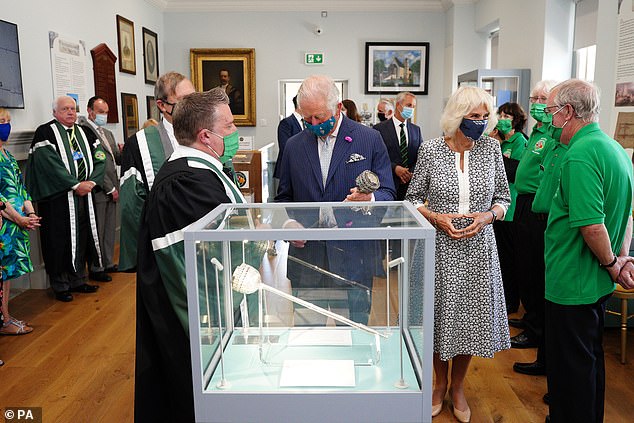 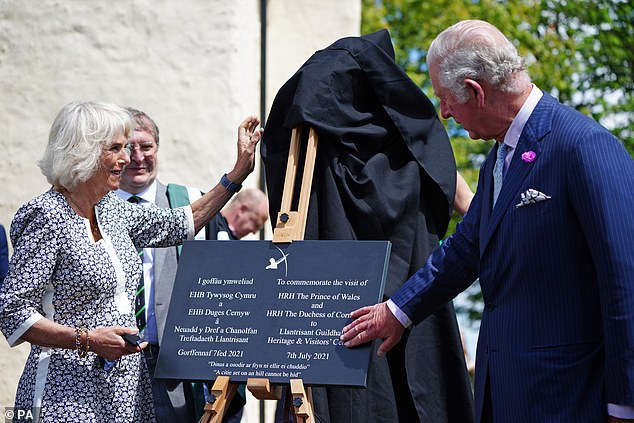 ‘You should be very proud of yourself,’ she said admiringly.

And with a twinkle in her eye, she made very clear that in the interests of duty she would be more than delighted to try his produce for herself.

‘Before I go can I congratulate you on the wonderful job you have done here with this incredible vineyard,’ she said.

‘I know you started knowing nothing about it and have learnt a lot in a short space of time.

‘As president of Wines GB, I am so proud to be part of the wine growing industry in the UK. Ive been to quite a lot of vineyard – 600, I think so far – and I intend to visit as many as I possibly can. We are really getting it right in this country and giving the French a run for their money.

There was just enough time to plant a vine and unveil a plaque before the duchess, with a wink to the media, said she was hopeful that there would be someone to volunteer to drink the rest of her bottle.

Afterwards Mr Davies said: ‘The duchess is a lovely woman and we are so proud and pleased to have her here today and working on our behalf as president of Wines GB.’ 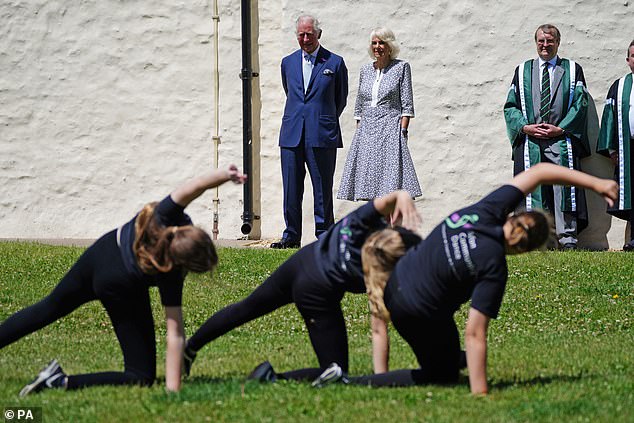 Dancers put on a show outside the new building, much to the dleight of the royals who watched the performance 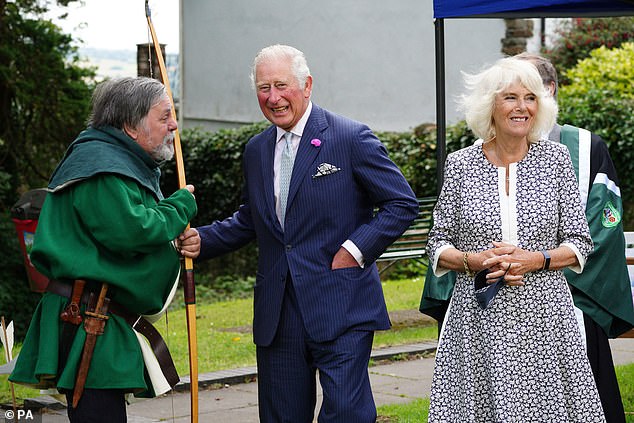 Yesterday, the couple took solo trips, with Camilla enjoying an ice cream as she met with local business owners to celebrate the Hay Festival.

She opted for an all blue outfit as she chatted with locals while on a tour of tour independent shops and local businesses.

Camilla was without Charles, who tested out a hydrogen-powered car when visiting the manufacturer behind the eco-friendly vehicle.

He toured Riversimple, a hydrogen-powered car manufacturer in Llandrindod Wells, Powys, as part of his week-long trip to Wales.

The heir to the throne, who donned a protective face covering to combat the spread of the coronavirus, looked sharp in a grey suit with a purple tie for his visit.

On arrival at the company, Prince Charles visited the workshop where he saw a number of vehicles and discovered more about the production process.

The royal spoke to engineers and technicians about the cars, before taking the wheel of a green-coloured Rasa model – which is a lightweight, two-seat electric vehicle powered by hydrogen.

Taking it for a test-drive, Charles heard how the Rasa emits nothing but pure water vapour and is designed to minimise the particulates from tyres and brakes with its low weight, skinny tyres and high regenerative braking.