Prince Charles has been snapped attending a Sunday church service at Canisbay Church in Caithness during his royal visit to Scotland.

The royal, 73, who is known as the Duke of Rothesay while in the country, has undertaken a number of appointments during his annual stay at the Castle of Mey near John O’Groats.

Today, he was seen chatting with a number of people as he attended the service at Canisbay Church, which is the most northerly parish church in mainland Scotland.

The royal wore traditional Scottish dress for the occasion, complementing his kilt with knee socks and a sporran.

Prince Charles (left), who is currently in Scotland for his annual stay at the Castle of Mey near John O’Groats, was snapped speaking to Rev Janet Easton Berry (right), ahead of a Sunday church service at Canisbay Church in Caithness 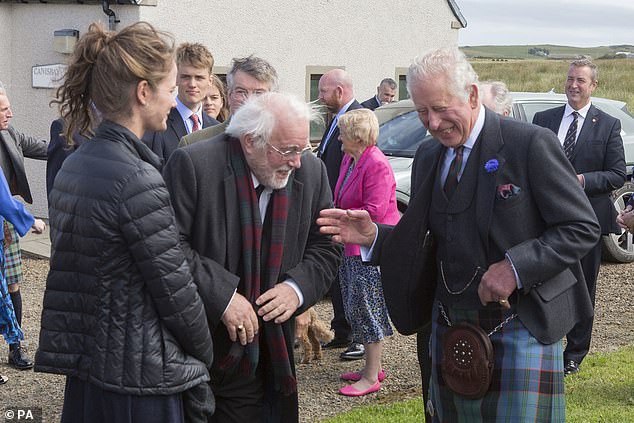 The royal, who is known as the Duke of Rothesay while in Scotland, was photographed laughing as he spoke with writer and director Murray Watts and artist Monique Sliedre at the church 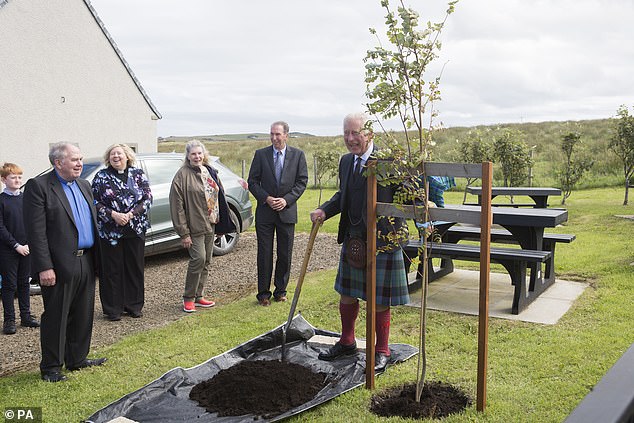 Among those he was photographed talking to were Rev Janet Easton Berry and Rev Lyall Rennie.

And the royal was snapped appearing to laugh enthusiastically as he spoke with writer and director Murray Watts and artist Monique Sliedre outside the church.

His attendance at the service followed an earlier appearance today.

Before the church service, Prince Charles planted a Rowan tree in the grounds of the church. 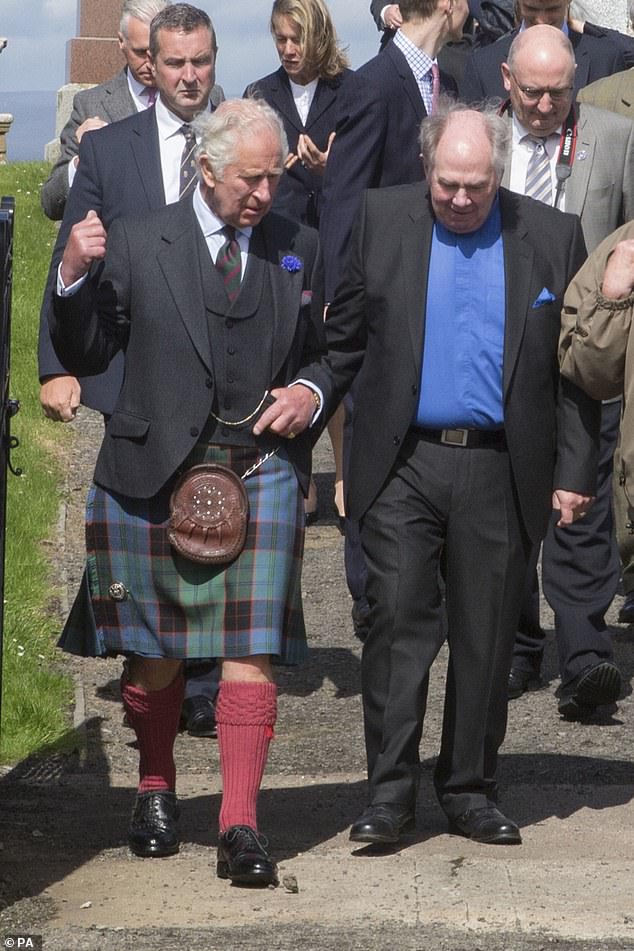 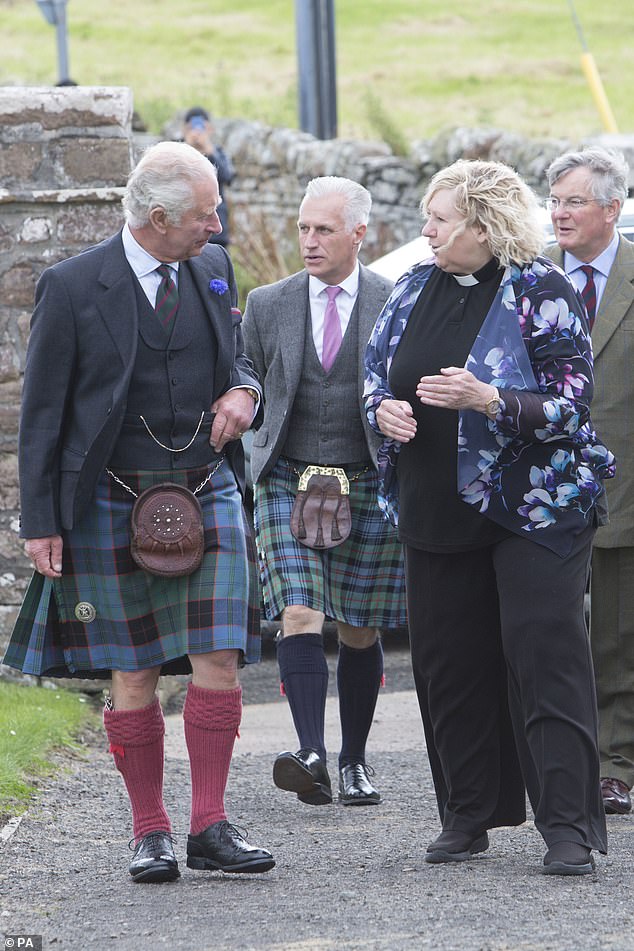 The royal donned traditional Scottish garb for his outing, sporting a kilt as well as knee socks and a sporran 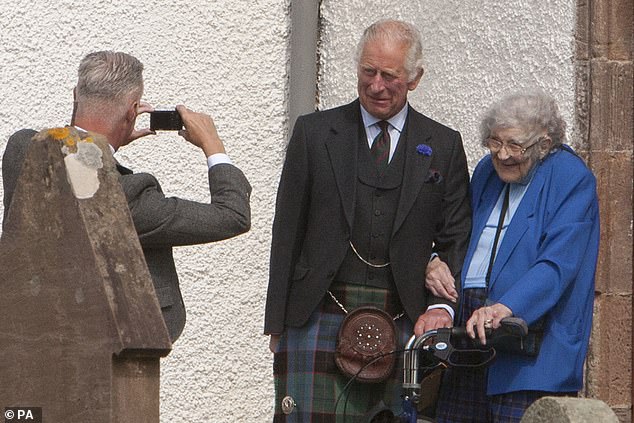 During the outing in Scotland today, the royal was seen taking a photo with Sheila Moir at Canisbay Church

He was seen smiling as he got stuck into the dirty work, holding a spade and digging a hole in the ground in which to plant the sappling.

Yesterday, he attended the Mey Highland Games at the John O’Groats Showground in Caithness.

Charles began his annual stay at the Castle of Mey near John O’Groats at the end of July.

The Castle of Mey was the only home ever owned by the Queen Mother. 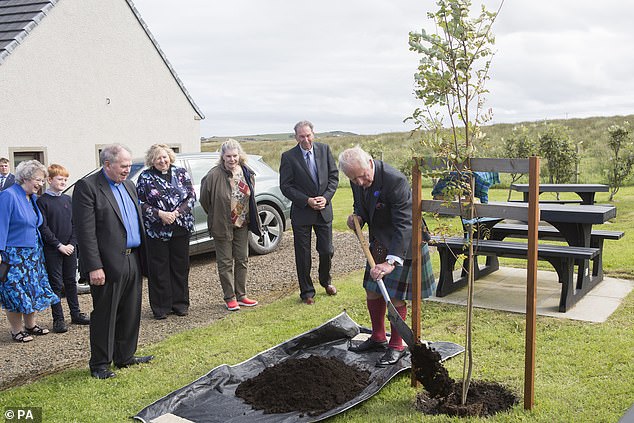 Charles showed he was not afraid to get his hands dirty, and got stuck in digging a hole in which to plant a Rowan tree

Today’s appointment saw Prince Charles getting his hands dirty, as he got stuck into some gardening work, planting a tree 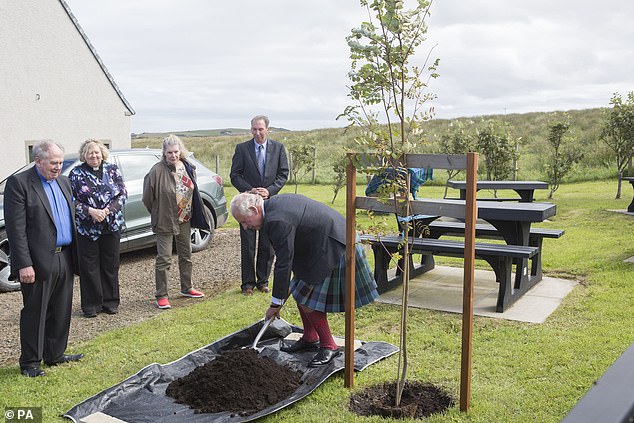 Every year Prince Charles, pictured here planting a tree today in the grounds of Canisbay Church in Caithness, enjoys a stay at Castle of Mey near John O’Groats

The Queen Mother first saw what was then known as Barrogill Castle in 1952, while mourning the death of her husband, King George VI.

Falling for its isolated charm and hearing that it was to be abandoned, she decided to save it.

Having acquired the most northerly-inhabited castle on the British mainland, The Queen Mother renovated and restored it and also created beautiful gardens.

Since arriving in Scotland, the Duke of Rothesay has undertaken a number of engagements, including meeting food bank volunteers in Caithness.