The Prince of Wales was snapped driving himself to a Sunday church service in Scotland today.

Charles, 74, who is currently staying in Scotland, where he is known as the Duke of Rothsay, appeared to look relaxed behind the wheel of his car as he made his way to Crathie Kirk church.

He was joined by Prince Edward, 58, who was seen driving a different car, with his daughter Lady Louise Windsor, 18, in the passenger seat.

The royals have a long history of attending the church, at which Queen Victoria began worshipping in 1848.

Since then, every British monarch has worshipped at Crathie Kirk when staying at nearby Balmoral.

Charles, 74, who is currently staying in Scotland, where he is known as the Duke of Rothsay, was seen driving himself to Crathie Kirk church for a small Sunday service 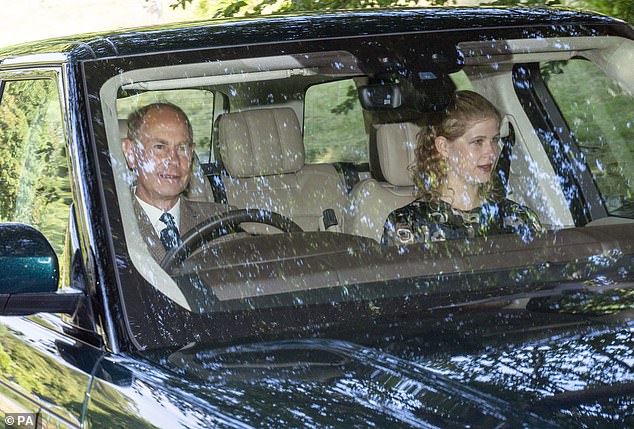 He was joined by Prince Edward, 58, who was seen driving with his daughter Lady Louise Windsor, 18

While the royals were en route, the Queen’s Guards were seen lining the driveway to the small church ahead of their arrival.

Hands on the wheel, Prince Charles could be seen wearing a grey suit and a tie, with a man thought to be an aide by his side in the passenger seat.

With his eyes on the road, the heir-to-the-throne looked relaxed as he made his way to the service.

Meanwhile, also driving his car, Edward was wearing a brown tweed suit with a white shirt and a black tie. 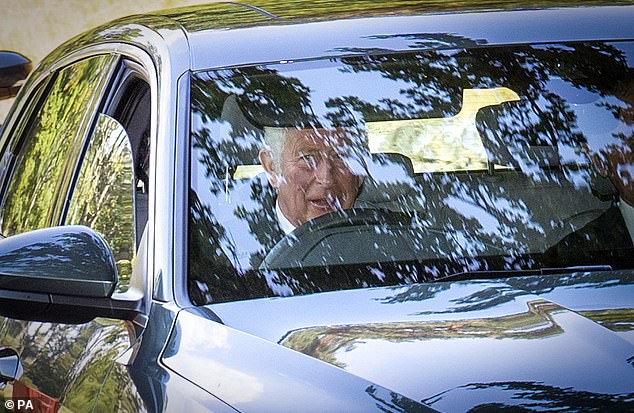 Prince Charles, pictured today while driving himself to Crathie Kirk church is currently in Scotland, where he has been undertaking a number of royal appointments including meeting locals and visiting businesses 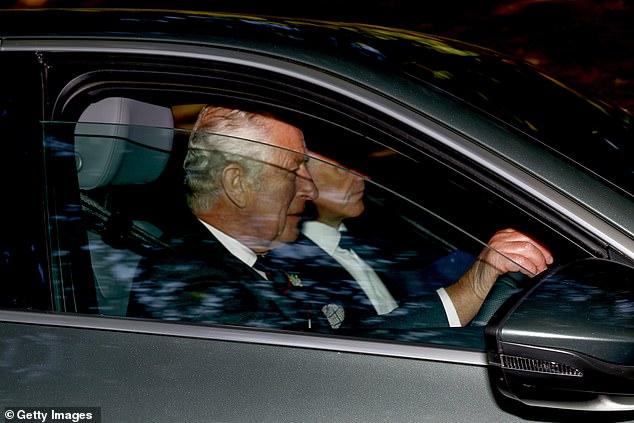 At the wheel of the vehicle, Prince Charles, in a smart dark grey suit, looked relaxed on the sunny morning 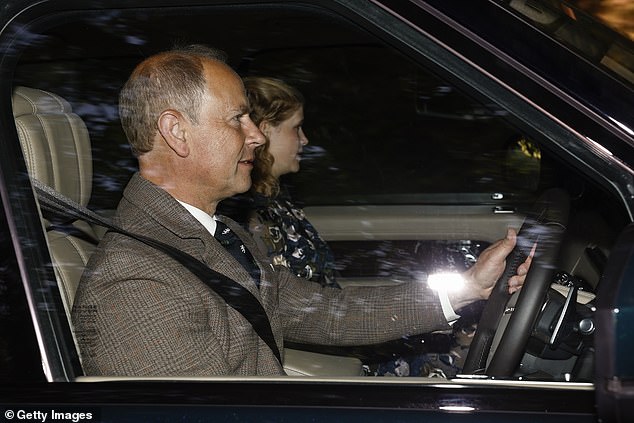 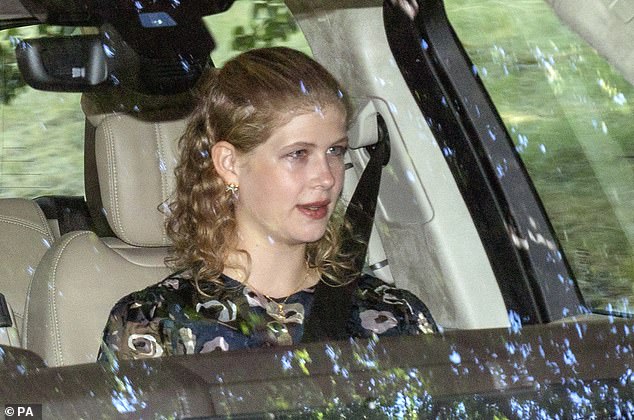 Meanwhile, 18-year-old Lady Louise appeared to have donned a dark frock with an abstract floral print for the outing

Next to him, Lady Louise looked to be wearing a black floral number with long sleeves.

Her blonde locks were styled in bouncy curls revealing the pair of gold earrings she had picked for the service.

Sophie Wessex and the couple’s youngest, James, were not in the car with them.

While the south of the UK is experience record-breaking temperature in yet another heatwave, temperatures in Aberdeenshire won’t surpass a comfortable 24 degrees. 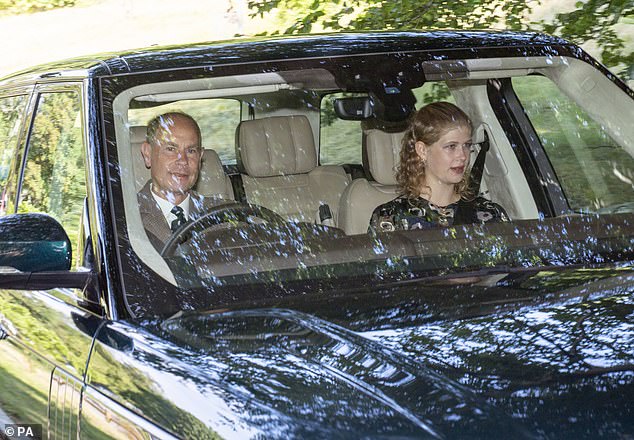 Prince Edward and Lady Louise did not appear to be accompanied by Sophie Wessex and the couple’s youngest, James 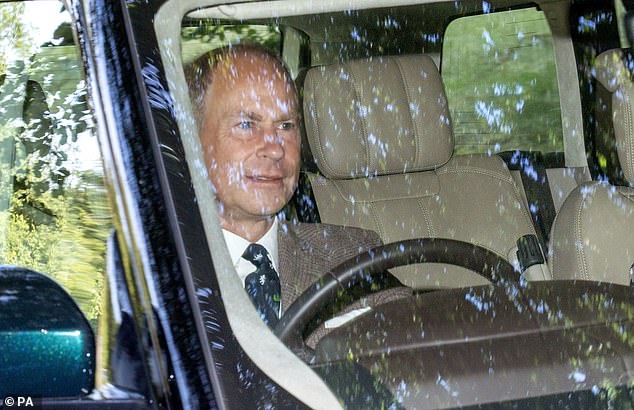 Luckily for Prince Edward (pictured) while England is currently facing a heatwave, temperatures in Aberdeenshire won’t surpass a comfortable 24 degrees 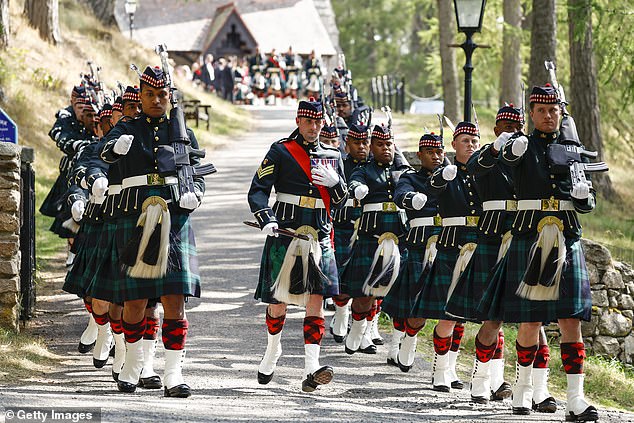 Prince Charles is currently undertaking his annual visit of Scotland, where he has been meeting locals, visiting businesses and attending church services.

Last week, he donned a kilt to attend a service at Canisbay Church in Catihness.

Charles began his annual stay at the Castle of Mey near John O’Groats at the end of July.

The Castle of Mey was the only home ever owned by the Queen Mother.

The Queen Mother first saw what was then known as Barrogill Castle in 1952, while mourning the death of her husband, King George VI.

Falling for its isolated charm and hearing that it was to be abandoned, she decided to save it.

Having acquired the most northerly-inhabited castle on the British mainland, The Queen Mother renovated and restored it and also created beautiful gardens.

Since arriving in Scotland, the Duke of Rothesay has undertaken a number of engagements, including meeting food bank volunteers in Caithness.