Prince Charles met not one but two pop princesses – Kylie Minogue and Cheryl – along with children’s favourite Sooty at a variety show marking his 70th birthday.

The Prince of Wales, who turns 70 on Wednesday, was the guest of honour at the We Are Most Amused and Amazed event at the London Palladium.

The evening of comedy and magic featured an all-star line-up – including Rowan Atkinson, Bill Bailey and Sandi Toksvig – along with some very special guest appearances.

The concert, held in aid of the Prince’s Trust, took place at the end of October, but will air on ITV on Tuesday night.

Prince Charles met with Kylie Minogue as he attended the We Are Most Amused and Amazed performance at the London Palladium. He also met with comedians Rowan Atkinson (left) Alistair McGowan (right) 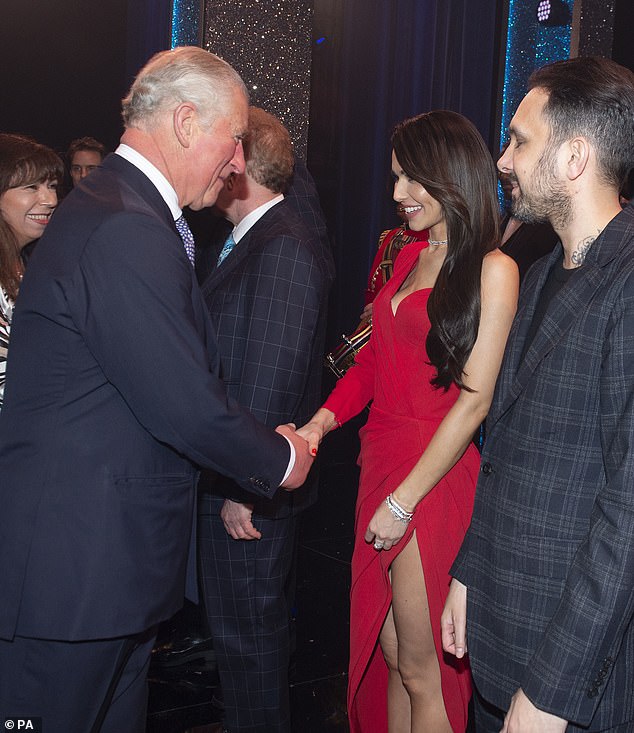 Charles, who turns 70 on Wednesday, also met with Prince’s Trust ambassador Cheryl, who wowed in a daring red gown for the occasion

The London Palladium event is part of a series of celebrations held in honour of Charles’s milestone birthday this week.

The Prince of Wales will mark his 70th birthday with a banquet at Buckingham Palace on Thursday night, with European royals including Denmark’s Crown Princess Mary and Crown Prince Frederik expected to be in attendance.

Charles looked in high spirits as his met with Prince’s Trust ambassadors Kylie Minogue and Cheryl at the London Pallaidum event, with the singers both wowing in floor-length gowns. 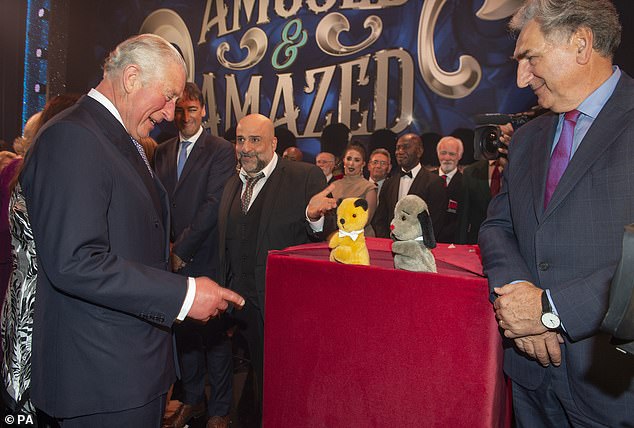 Prince Charles looked in high spirits as he met with Sooty and Sweep at the London Palladium event, along with Downton Abbey star Jim Carter (far right) 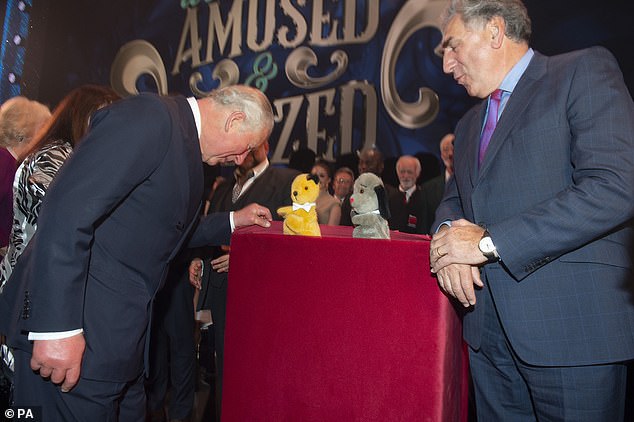 The Prince of Wales tried to peer into the box below the two puppets, asking Carter (far right) if there was anyone inside the box

After trying to peer into the box below the two puppets, Charles asked Carter if there was anyone inside and the actor replied: ‘Nobody, it’s Sooty and Sweep, can’t give away the secrets you know.’

Meanwhile, Camilla declared the puppets to be her ‘all-time favourite’ when she saw them at the event.

Other stars who took part in the event included Omid Djalili, Alistair McGowan, Armstrong and Miller, and Wallace & Gromit, along with video appearances from Hollywood star Whoopi Goldberg and Dame Judi Dench.

During the show, Mr Bean star Rowan Atkinson played the Devil who was taking a roll-call of sinners newly arrived in Hell, and divided the audience into groups from thieves to lawyers. 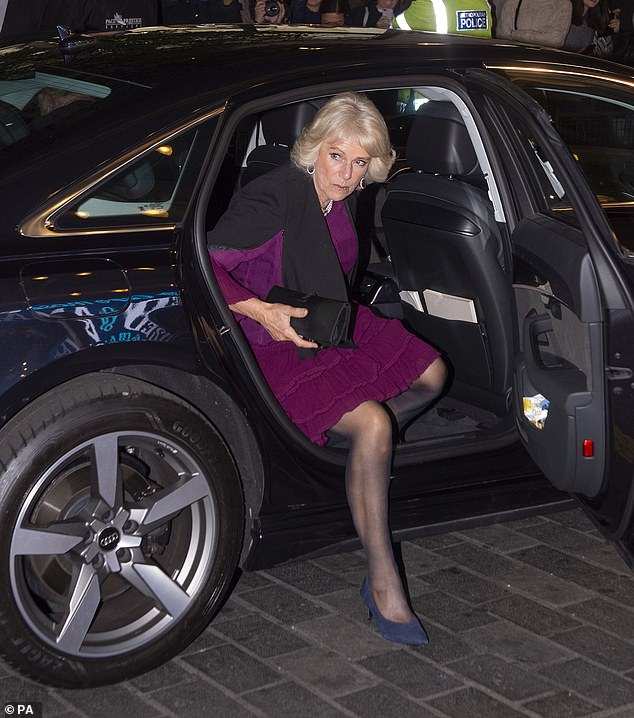 The Duchess of Cornwall, 71, also attended the event at the London Palladium, looking resplendent in an elegant plum dress 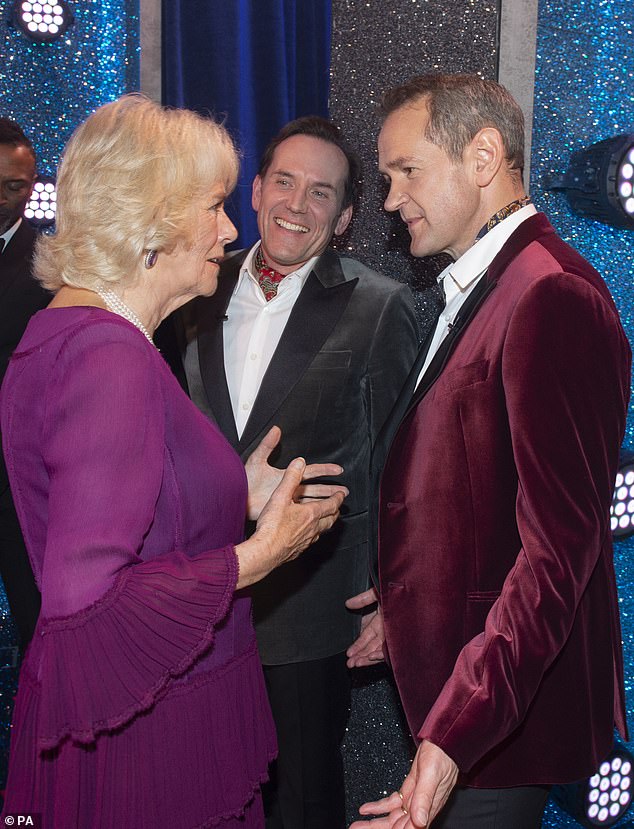 To a roar of laughter he told the prince: ‘You thought you were doing such good work. Would you like to come down next to the other organic farmers.’

Dame Judi gave an expletive-laden list of instructions, but the swear words were bleeped out which had the audience in stitches.

Appearing from the world of magic were Penn & Teller, Dynamo and The Ehrlich Brothers.

Stand-up comic and actor Djalili poked fun at Brexit during his routine, as he performed for The Prince of Wales. 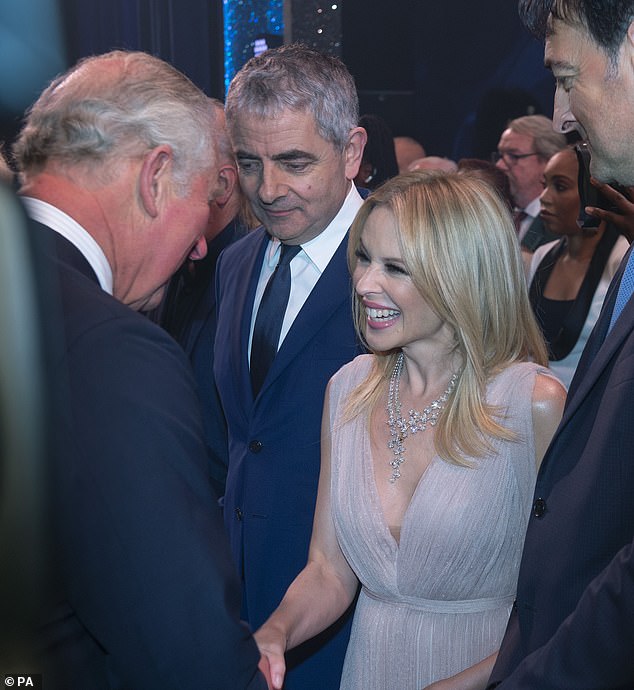 Prince Charles shook hands with pop princess Kylie Minogue, who opted for a nude gown for the occasion 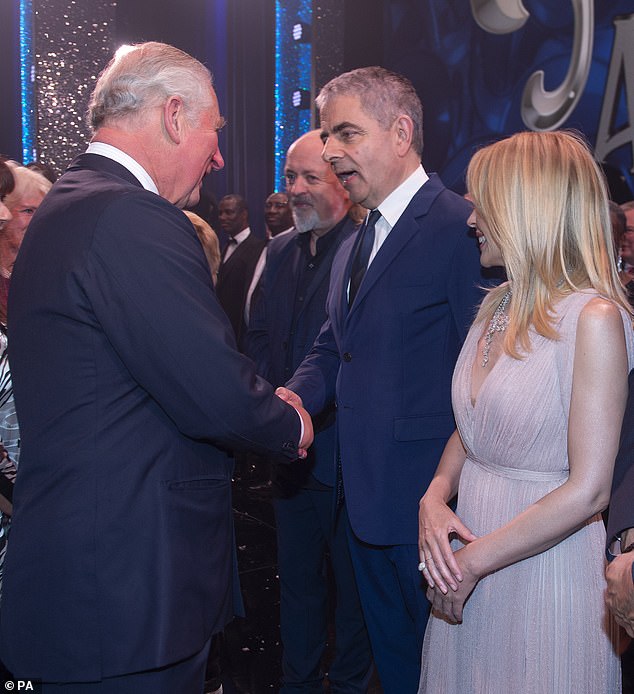 The Prince of Wales also met with Mr Bean star Rowan Atkinson, who played the Devil taking a roll-call of sinners newly arrived in Hell during the show 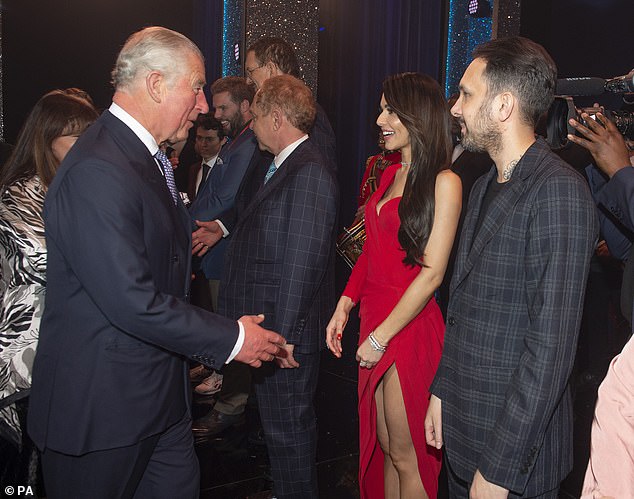 Both Kylie, 50, and Cheryl, 35, wowed in daring floor-length gowns featuring thigh-high splits as they appeared on stage during the show. Kylie appeared to change into a different dress before meeting Charles

Djalili said: ‘They told me not to talk about Brexit, but you know I have problems with authority.’

The comedian added: ‘Brexit is an amazing thing, so British… next Olympics we should do the Brexit 100 metres.

‘The Brexit 100 metres – everyone lines up, the guy with the starter gun shoots himself in the foot.’

Comedian Bill Bailey had flown from Australia, where he was touring, for the gala night.

He said: ‘These dos are quite different actually, I performed at his 60th, that was great fun, and you get to meet lots of great people and hang out. 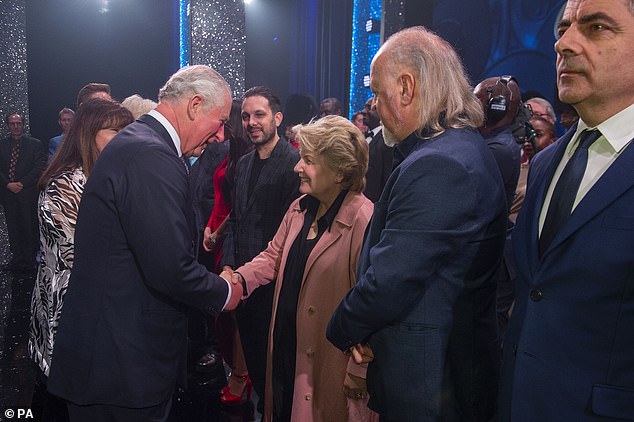 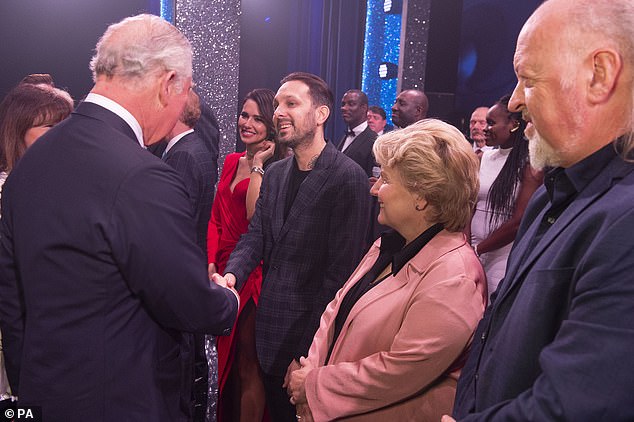 The night of comedy and magic also included a performance from Dynamo, who met with Charles after the show 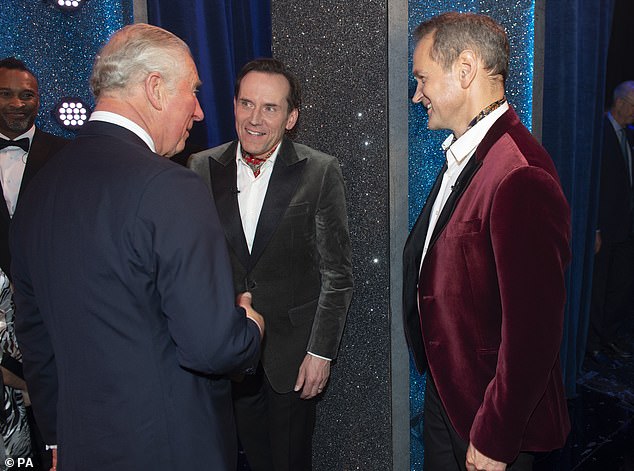 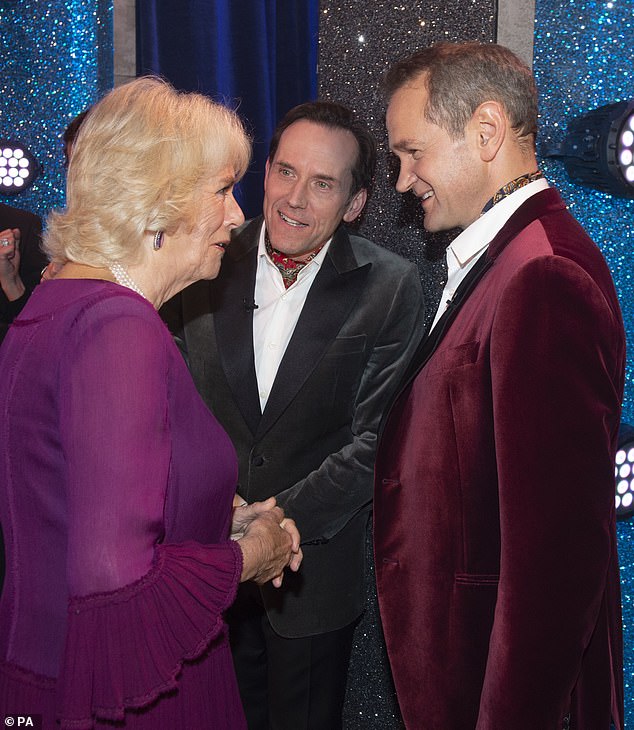 The Duchess of Cornwall, who opted for an elegant plum dress for the event, also met with Armstrong and Miller after the show 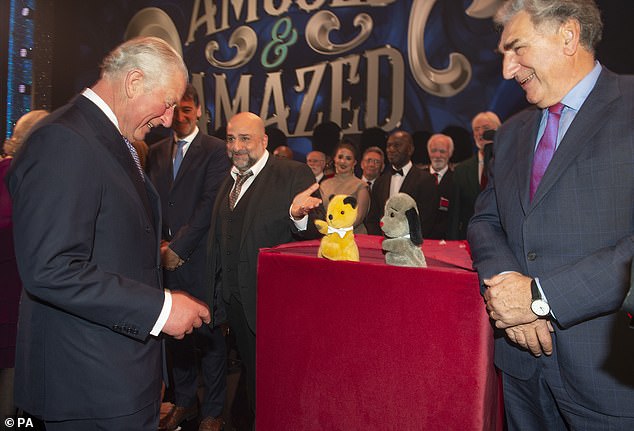 ‘It’s a bit of a different atmosphere from some shows, there’s a purpose for it, I think that’s the thing.

‘There’s a tremendous sense of good will because it’s for a charity, it’s for a good cause and that makes the evening have a really good atmosphere.’

There was also a poignant tribute to the prince when a montage of images from his life was screened, and later Wallace and Gromit made a video call to say ‘Happy Birthday Chuck’.

The Kingdom Choir reprised their performance from the Duke and Duchess of Sussex’s nuptials by again singing Ben E King’s signature tune Stand By Me, that had wowed the wedding congregation.

We Are Most Amused And Amazed will be screened by ITV on Tuesday at 8pm. 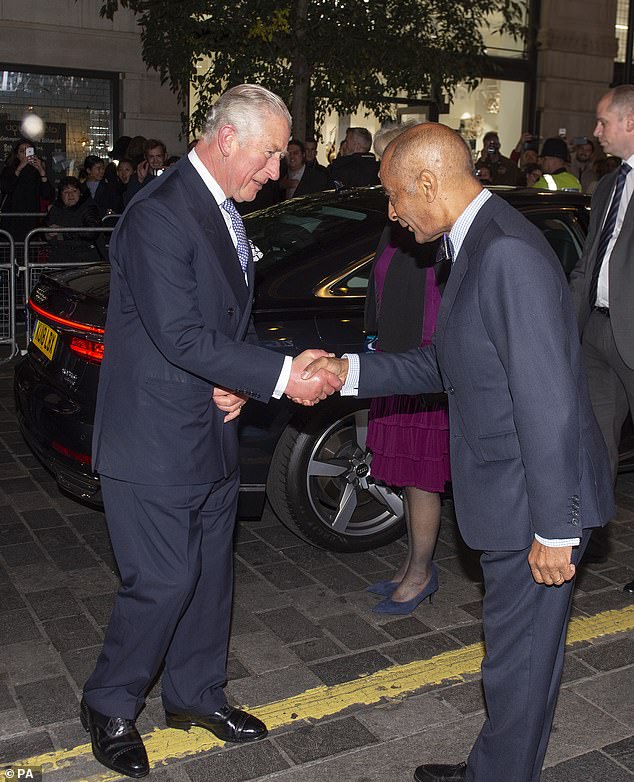 Prince Charles, who turns 70 on Wednesday, was met by Lord-Lieutenant of Greater London, Kenneth Olisa, as he and Camilla arrived at the event 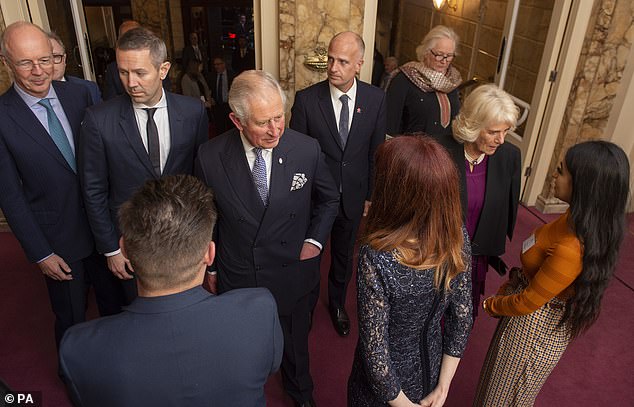 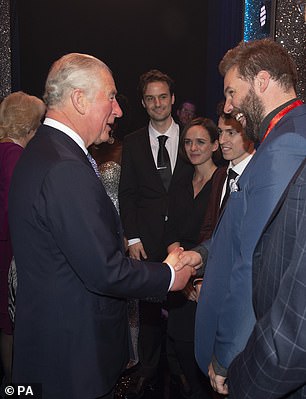 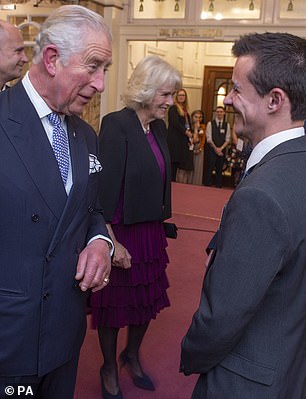 Prince Charles met with members of the cast after the London Palladium extravaganza, as well as Princes’s Trust beneficiaries (right) 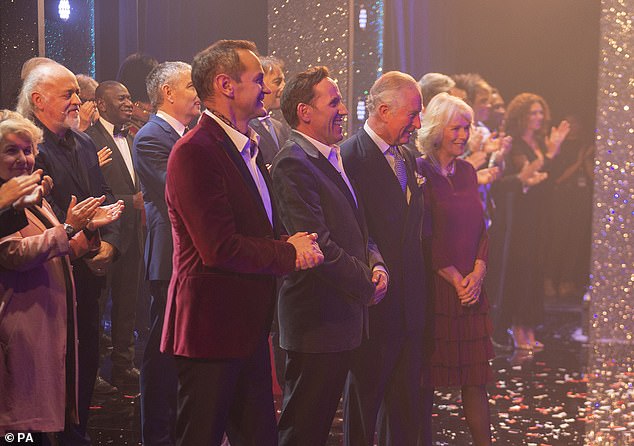 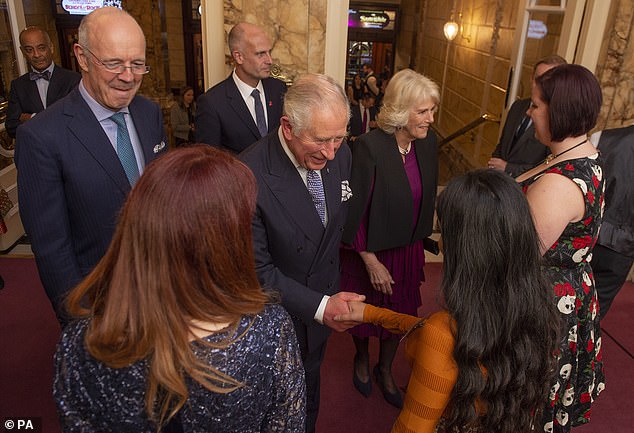 The concert was held to raise money for the Prince’s Trust, as well as marking Charles’ 70th birthday. Charles and Camilla are pictured meeting young Princes’s Trust beneficiaries 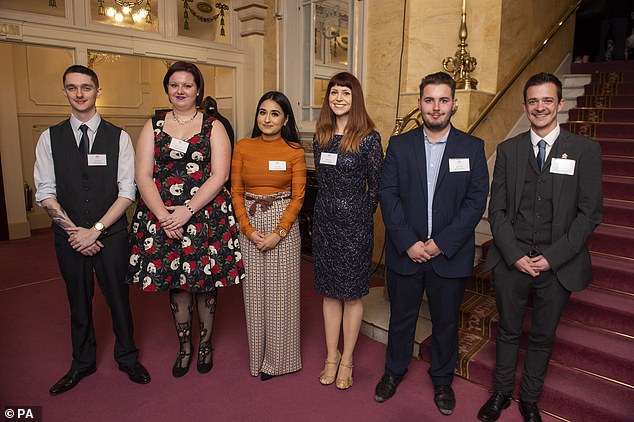