Prince Charles will warn that the climate crisis will ‘dwarf’ the impact of coronavirus and call for ‘swift and immediate action’ in tackling the matter.

In a recorded message from Birkhall in the grounds of Balmoral, the Prince of Wales, 71, will say that the Covid-19 pandemic is a ‘window of opportunity’ to reset the economy for a more ‘sustainable and inclusive’ future.

The prince’s comments come months after he urged nations to work together to tackle the environmental threat to the planet as he attended WaterAid charity’s Water and Climate event at Kings Place in London.

In his message, to be played at the virtual opening of Climate Week on Monday afternoon, the prince said: ‘Without swift and immediate action, at an unprecedented pace and scale, we will miss the window of opportunity to ‘reset’ for… a more sustainable and inclusive future.

‘In other words, the global pandemic is a wake-up call we cannot ignore…

‘…[the environmental] crisis has been with us for far too many years – decried, denigrated and denied.

‘It is now rapidly becoming a comprehensive catastrophe that will dwarf the impact of the coronavirus pandemic.’

Prince Charles, who tested positive for coronavirus in March, previously urged members of the Commonwealth to come together to tackle climate change.

He also called on business and political leaders to embrace a radical reshaping of economies and markets in order to tackle the crisis at the Davos summit back in January.

In January, the prince has also met teenage climate activist Greta Thunberg at the World Economic Forum in Davos.

Meanwhile in March, the Prince of Wales, who was made President of WaterAid in 1991, urged nations to work together to tackle the environmental threat at a climate event at Kings Place in London.

He told a round-table at the event: ‘With the urgency that now exists around avoiding irreversible damage to our planet, we must put ourselves on what can only be described as a war footing. 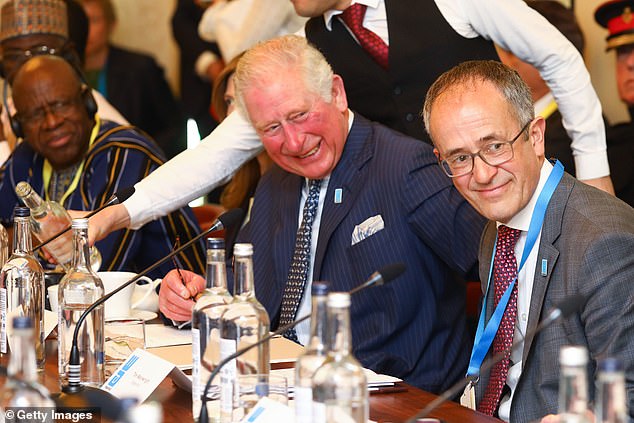 ‘The current battle against the coronavirus at least demonstrates, if nothing else, how quickly the world can mobilise when we identify a common threat.’

Last month a study suggested the global lockdown will have a ‘negligible’ impact on rising temperatures but a green recovery could avert dangerous climate change.

Experts led by the University of Leeds found that lockdowns caused a fall in transport use, as well as reductions in industry and commercial operations, cutting the greenhouse gases and pollutants caused by vehicles and other activities.

However the impact is only short-lived, with analysis showing that even if some measures last until the end of 2021, global temperatures will only be 0.01C lower than expected by 2030.