The Earl and Countess of Wessex and the Princess Royal video called several veterans who flew Lancaster Bombers and raised a glass on VE Day to learn about their experiences in the war.

One of the people Sophie Wessex, 55, spoke with was Barbara Herman from Aylesbury, who was in the ATS, while Prince Edward, 55, spoke to Jim Healey, a former Corporal in the royal marines, and 96-year-old Ada Chell from Banger, in Northern Ireland.

Speaking on Facebook Live’s The Royal British Legion’s VE Day 75 Commemorations, the Earl of Wessex told Ada it was a ‘great pleasure’ to say hello to her – albeit over technology rather than face-to-face.

‘We’re very grateful for all that your family have done,’ he said. ‘I hope there’s a bit of you that can celebrate on this anniversary of VE day.’

Earlier this week, Prince Edward, 56, participated in a video call with Ada Cell, 96, from Banger, in Northern Ireland, who joined the ATS in 1941 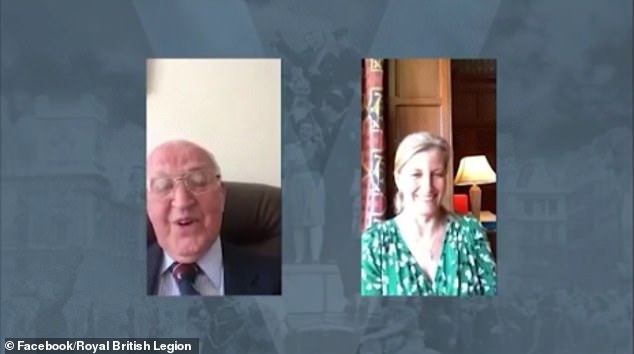 Sophie Wessex (pictured right), 55, spoke with Louis Goodwin (pictured left), who was a pilot with the RAF in the war 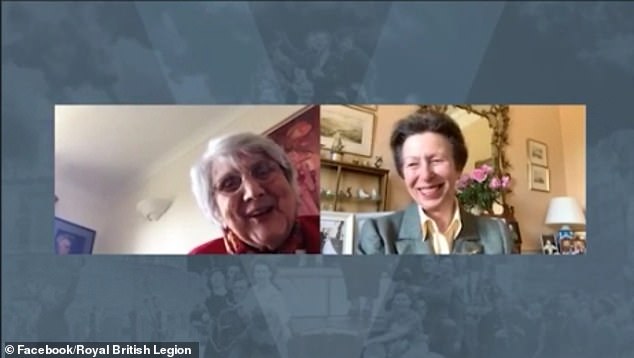 Princess Anne (pictured right) spoke to Dorothy Pettican Runnicles (left), who worked as a petty officer air radio mechanic with the Rens in the war

Ada went on to explain her wartime experiences and said: ‘I joined the ATS in 1941. I was a Girl Guide and I was seventeen-and-a-half. When I went to the recruiting office they kept me there because they thought I had potential.’

Prince Edward asked: ‘Where were you on VE day? It was a bittersweet memory as there were still lots of people in Europe, but it was the knowing they weren’t going to have to fight to more that was the key to it really.

‘It wasn’t much fun coming back after the war,’ replied Ada. ‘Everything had changed so much. I think that was the problem. We all grew up very quickly. I look back now and life was completely different.’

Meanwhile, Sophie Wessex asked Louis Goodwin, who was a pilot with the RAF in the war, flying raids into Germany and France, to tell her about his personal experiences in the war. 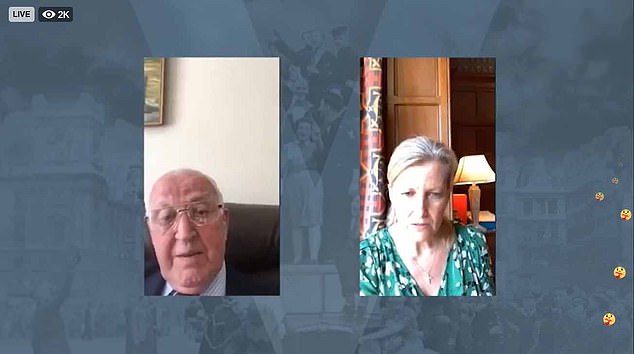 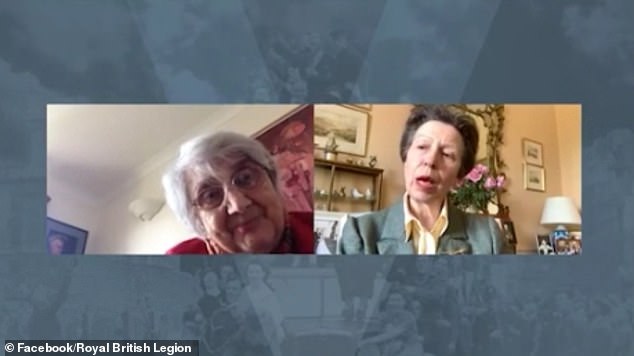 Princess Anna realised that she wasn’t based too far away from Dorothy, who revealed she was speaking from Gloucester

‘I joined in 1943,’ he said. ‘I was just 18. I had been selected about six months before for pilot navigator training. When I joined up I thought the war was never going to last that long and I’d never get to fly. The training for a pilot was a good year so I elected to go for a quicker course.’

Sophie then went on to ask what Louis was flying in, to which he replied: ‘A Lancaster bomber’.

‘Quite an exposed position you were in,’ she continued. ‘You were right down in the tail of the plane.’

Louis joked: ‘Yes, right in the end by myself. I wasn’t quite as fat as I am now but with flying gear on it was a job to get in anyway and a little bit tight sitting behind four machine guns so I was a bit restricted.’

Sophie then proceeded to question how long after VE Day the war veteran was able to return home.

‘I went back home,’ he said. My brother who was two years younger than me. At the beginning of the war he was 12 and my sister was seven. They were immediately evacuated up North and I didn’t see them again until six years later when I came back from Egypt. I went home then and they were home by then.’

Sophie added: ‘They must have missed you so much.’

As part of the check in and chat initiative, Princess Anne, 69, spoke with Dorothy Pettican Runnicles, who worked as a petty officer air radio mechanic with the Rens in the war, and during their chat, they found out they have something in common. 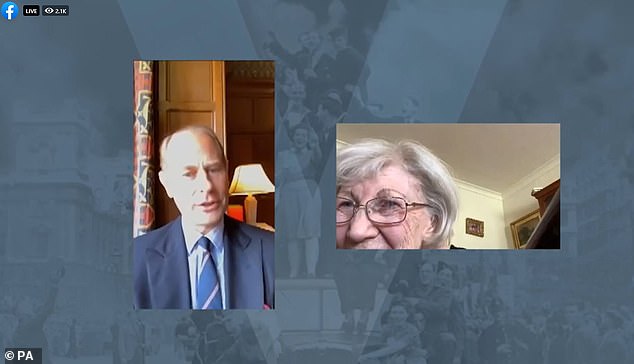 Prince Edward (left) told Ada: ‘We’re very grateful for all that your family have done,’ he said. ‘I hope there’s a bit of you that can celebrate on this anniversary of VE day’

When the royal learned Dorothy was based in Gloucester, Princess Anne commented: ‘I’m not so far away. I’m just 500 feet up.’

Dorothy explained: ‘I was born in 1925. I was an East Londoner and we had already received a lot of German children into our grammer school and other schools in East London.

‘I was evacuated with this school. When I got my matriculation I returned to my home in East London and immediately volunteered for the services because it was the thing to do. We had to get this war finished. I was seventeen-and-a-half when I came back to London and volunteered.

She continued: ‘Because I had the privilege of physics and math and there weren’t many people doing it, and I did quite good at it, they told me I can’t be a cook and you have to wait for a college course and learn about radio communications into our aeroplanes.’