With Prince George about to start ‘big’ school in just a fortnight, his new private prep has been described as ‘competitive, oversubscribed’ and for ‘cosmopolitan parents who want their children to have the best English education money can buy’.

The third in line to the throne, who turned four in July, will be one of the youngest pupils in his class at Thomas’s, a private £19,884-a-year school in Battersea, an affluent middle class area of south west London, dubbed Nappy Valley by locals.

According to the newly updated review by the Good Schools Guide, Thomas’s, a family-owned school, is so popular that parents are encouraged to register their child at birth, although that is something that clearly didn’t happen in the little prince’s case.

Prince George, pictured, is about to start at a ‘competitive and oversubscribed’ school for ‘cosmopolitan parents who want their children to have the best English education money can buy’ 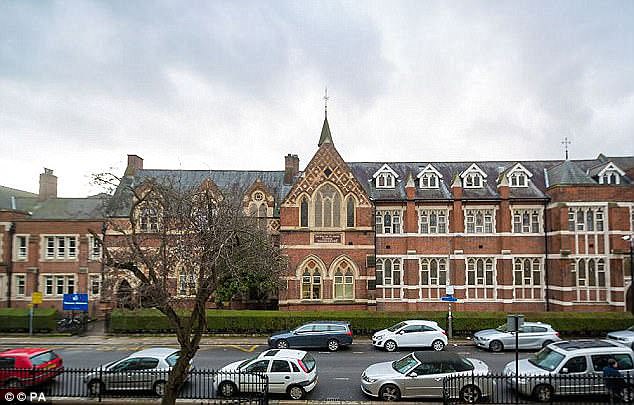 George will go to Thomas’s, a private £19,884-a-year school in Battersea, pictured, which is said to be ‘so popular parents are told to register their children at birth’

There are at least three applicants for each place offered and the school even has a criteria of what they look for in a child, namely ones with: ‘a measure of confidence, are responsive, sociable, with a light in their eyes’.

The popular guide, which is based on parent reviews, describes it as a ‘big, busy, slightly chaotic school for cosmopolitan parents who want their children to have the best English education money can buy.’

It does, however warn that ‘withdrawn types’ might find it a bit overwhelming.

The school has its own fleet of buses to ferry them for sports – which includes sculling – and boasts its own science labs, computer suites, music centre teaching everything from the cornet to the piano, and two pottery rooms.

Latin is compulsory from Year 5 and younger children, like George in reception, have access to a ‘fantastic’ rooftop playground.

In choosing Thomas’s, the Duke and Duchess of Cambridge, have shunned ‘traditional’ royal feeder schools, such as Whetherby, attended by both William and Harry.

It is situated across the River Thames from Kensington Palace, up to half an hours’ drive away in rush hour, but the Duke and Duchess are insisting that they will do the school run as much as possible themselves.

Thomas’s prides itself on a ‘rounded education’, with as much emphasis on its motto Be Kind, as on academic results – although many of its 540 boys and girls, aged four to 13, go onto good public schools such as Eton.

The family-run school encourages children not to have one particular best friend – preferring children to mix with a wide variety of fellow pupils – and there is great emphasis on ‘kindness, courtesy, confidence and humility’.

One parent has told the Mail that the school has even just bought a lodge in Austria where they take children on ski holidays. 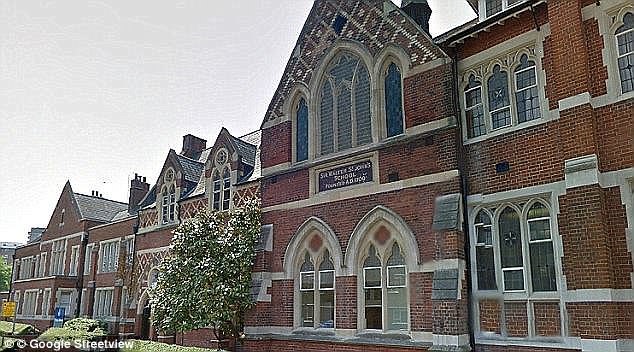 The family-run school, pictured, encourages children not to have one particular best friend

In a letter to parents earlier this year, the school’s principles, Ben Thomas and Tobyn Thomas (sons of the school’s founders), said they were ‘delighted’ at William and Kate’s decision.

The letter said: ‘This is clearly a significant moment for their family and most certainly for Thomas’s.

‘Like so many parents, the Duke and Duchess have put a great deal of thought into the choice of their eldest child’s first ‘big school’.

We are honoured that the aims and values of Thomas’s reflect those that Their Royal Highnesses would like for Prince George’s education.

It’s motto is ‘Be kind’ and there is great emphasis on kindness, confidence and humility, as well as academic results

While it might not boast the royal pedigree of Wetherby School, Thomas’s does count some A-listers among its alumni. Florence Welch, the lead singer of the indie group Florence and the Machine, attended before leaving for Alleyn’s School, in south east London. Model Cara Delevingne and upcoming actress Céline Buckens are also reported to be among their former pupils.

The Tatler Schools Guide states: ‘It’s a balance to Thomas’s high-achieving, competitive side: exits to Bryanston, Marlborough and Bradfield last year; the school is feared on central London’s sporting circuit; the drama productions are impressive. Entrance at 4+ is selective, with 60 places up for grabs (they close the list at 180 registrations). Lots of Chelsea and South Ken families here, who get very stuck into the community.’

Art, ballet, drama, ICT, French, music and physical education are all taught by specialist teachers from a child’s first day in school, according to a welcoming note from Mr Thomas.

‘We are deeply conscious of the trust that they, like all Thomas’s parents, are placing in us and we hope very much to live up to their expectations.’

They said the couple hoped that George, who will be accompanied by bodyguards at all time while at school, would be allowed to fit in with the other children without much fuss.

‘The Duke and Duchess have made it clear that they do not wish Prince George’s attendance at Thomas’s to change its aims, values or ethos in any way.

‘They would like, as far as is possible, for him to enjoy the same education that all of our pupils receive and for them to join the school community as all of our new parents do. 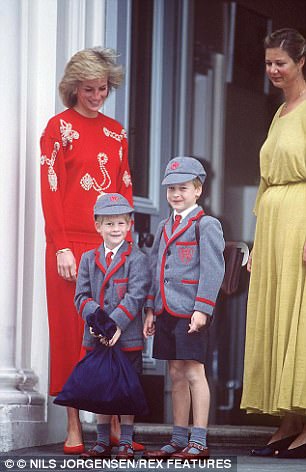 George’s father the Duke of Cambridge, pictured as a schoolboy with brother Harry and mother Diana, attended Weatherby school in Notting Hill

‘I am sure that you, like us, will look forward to welcoming them wholeheartedly into the Thomas’s community in September.’

Kensington Palace previously said: ‘The Duke and Duchess of Cambridge will send their son, George, to Thomas’s Battersea from September 2017 this year.

Their Royal Highnesses are delighted to have found a school where they are confident George will have a happy and successful start to his education.’

Earlier this year that the Cambridges’ announced that their family would be moving back to London this summer.

William and Kate have spent the past two years in relative seclusion at Anmer Hall, their spacious Georgian mansion on the Queen’s Sandringham Estate in rural Norfolk, after William took a part-time job as an air ambulance pilot.

Now he has resigned his position and is expected to become a full-time working royal in order to help his ageing grandparents.

His grandfather, Prince Philip, has retired from official duties at the age of 96, although he will still accompany the Queen, 91, on engagements occasionally.

Princess Charlotte, two, will also start nursery school in London in the next few months, in contrast to her brother who has attended a small local village nursery, the £5.50 an hour Westacre Montessori, close to Sandringham.

As Thomas’s has its own kindergarten department, it is widely expected that she will follow in George’s footsteps.