Prince Harry is ‘breaching his own privacy again’ with his plans to bring a camera crew to the UK to film a new Netflix documentary about the Invictus Games, a royal commentator has claimed.

The Duke of Sussex, 36, who is currently living in a £11million mansion in Montecito, California, announced earlier this year he is making a series for the streaming service which will follow competitors around the world training for the Games at The Hague, called Heart of Invictus.

A source said he is due to return to the UK for the documentary in November to visit an army base before meeting the Queen, 95. They told the Express: ‘Our understanding is that the Duke of Sussex will be accompanied by a small film crew in order to allow the public to see the hard work involved in planning these games.’

Former royal editor Charles Rae accused the Sussexes of ‘stuffy’ self-promotion, telling talkRADIO: ‘Harry is doing this Invictus Games as a “g-up” for the games, which were cancelled this year because of Covid. It’s another example of him and his wife breaching their own privacy again.

Prince Harry and Meghan Markle are ‘breaching their own privacy again’ with their plans to bring a camera crew to the UK to film his new Netflix documentary about the Invictus Games, a royal commentator has claimed (pictured: Harry with Joe and Jill Biden at the Invictus Games in 2017)

‘I can hardly wait, I am sitting here with bated breath, please bring it on… Let me see another load of woke, stuffy nonsense!’

Last year the couple declared they would now have a ‘zero engagement’ policy with four British newspapers to maintain their privacy, accusing them of being ‘invasive beyond reason’. In the past, Harry is believed to have thrown people out of his friendship group for talking to the press.

The Sussexes have since given a tell-all interview to Oprah Winfrey (shortly after Harry joined TV host James Corden for a chat on The Late Late Show), clinched a lucrative four-book deal which will see Harry publish a memoir, and struck a £100million deal with Netflix.

The upcoming documentary Heart of Invictus is said to be part of that deal. The streaming giant said the couple would be producing ‘content that informs but also gives hope’, from documentaries and scripted series, to features and children’s programming.

It will be directed by a British documentary Orlando von Einsiedel, whose team won an Academy Award for their short film The White Helmets and a BAFTA for Virunga, another documentary, set in the Congo’s Virunga national park.

Speaking of the filming with Christine Lampard on Lorraine earlier this week, royal expert Russell Myers said: ‘Imagine him popping up outside Buckingham Palace with a camera crew?

Former royal editor Charles Rae accused the Sussexes of ‘stuffy’ self-promotion, telling talkRADIO it’s ‘another example of [Harry] and his wife breaching their own privacy again’ (pictured: Meghan Markle in her recent 40th birthday video to promote her new 40×40 initiative)

‘Will we see Harry back with a camera crew in tow outside the palace? You never know. Nothing is off limits with Harry.’

It is believed Harry will bring along a film crew employed by Archewell Productions to visit participants at Stanford Hall, the Army’s rehabilitation centre for wounded soldiers. The Duke will appear on camera and be an executive producer.

A source said: ‘The Duke of Sussex will want to make sure we are ready as the last games were cancelled because of Covid.

‘We are hoping that the situation in April next year allows the games to go ahead as planned, in Holland. ‘

Talking about the new show, Harry said: ‘Since the very first Invictus Games back in 2014, we knew that each competitor would contribute in their own exceptional way to a mosaic of resilience, determination, and resolve.

‘This series will give communities around the world a window into the moving and uplifting stories of these competitors on their path to the Netherlands next year. 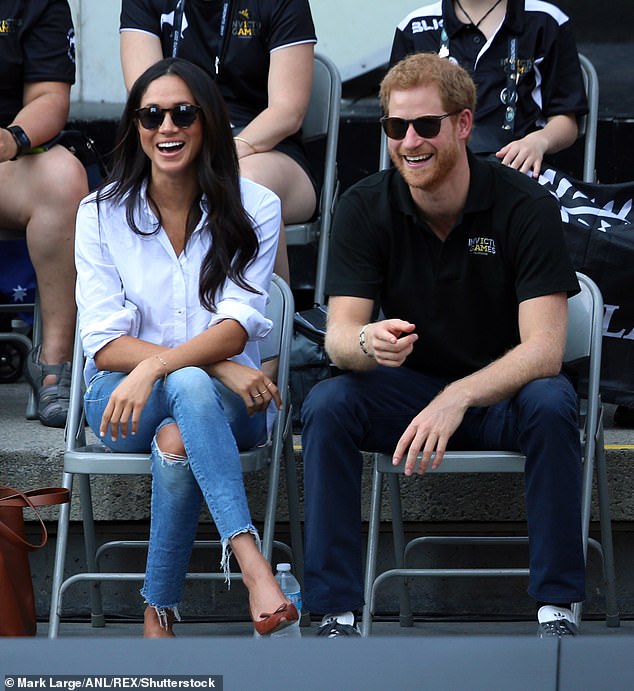 The Duke of Sussex, 36, who is currently living in his £11million mansion in Montecito, announced earlier this year he is making a series for the streaming service which will follow competitors around the world training for the Games at The Hague called Heart of Invictus

‘As Archewell Productions’ first series with Netflix, in partnership with the Invictus Games Foundation, I couldn’t be more excited for the journey ahead or prouder of the Invictus community for continuously inspiring global healing, human potential and continued service.’

Harry previously explained the Netflix and Spotify deals in the Oprah interview by saying: ‘My family literally cut me off financially, and I had to afford security for us.’

Dominic Reid, chief executive of the Invictus Games Foundation, said: ‘We’re very excited about the opportunity to shine the global spotlight of Netflix on the men and women that we work with, in order to ensure that even more people can be inspired by their determination and fortitude in working towards their recovery.

‘This partnership will also bring in significant funding to the charity. We are extremely grateful to our Founding Patron for his continued efforts to support the military community, and for making this partnership happen.’

Prince Harry is patron of the games, named after Invictus, Latin for ‘undefeated’.