They’re currently embarking on their first overseas visit as a couple, and Prince Harry and Meghan Markle have been given a warm welcome wherever they’ve gone.

And their visit to Pukeahu National War Memorial Park in Wellington on Sunday was no exception as the Duke and Duchess of Sussex were met with enormous crowds waiting to catch a glimpse of them.

Some were crying and shouting, while others were holding welcome banners, with one reading ‘Harry & Markle make a lil’ sparkle’.

The mother and father-to-be arrived in the country from Sydney today for the final stretch of their marathon 16-day tour which has also seen them visit Fiji and Tonga.

Huge crowds of royal fans gathered to welcome Prince Harry and Meghan Markle to New Zealand visit to Pukeahu National War Memorial Park in Wellington on Sunday. Pictured: A young woman holds up a sign that read ‘we heart you Megan [sic]’ 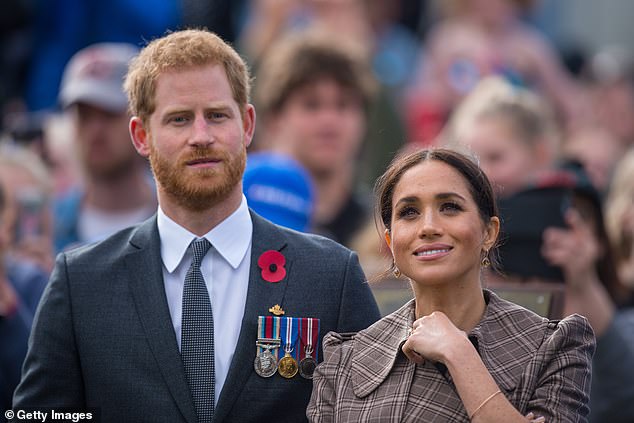 Cameras captured royal fans waiting patiently for their arrival as they visited the park to lay a wreath on the memorial.

A group of young women looked excited as the anticipation built up, with one member of the group eventually breaking down into tears.

Another group brought along a sign that said ‘we heart u Megan (Harry’s alright too) [sic]’, which one of them excitedly held up for the cameras.

One woman attached a sign to the railings that said ‘pregnancy suits you Duchess’, alongside a picture of Meghan, 37, as her suits character Rachel Zane. 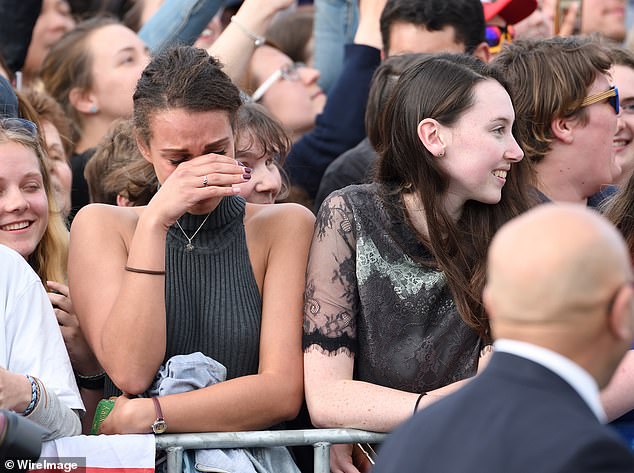 A group of young women waited to greet the couple behind the safety barriers, including one girl who started to sob when they arrived (middle) 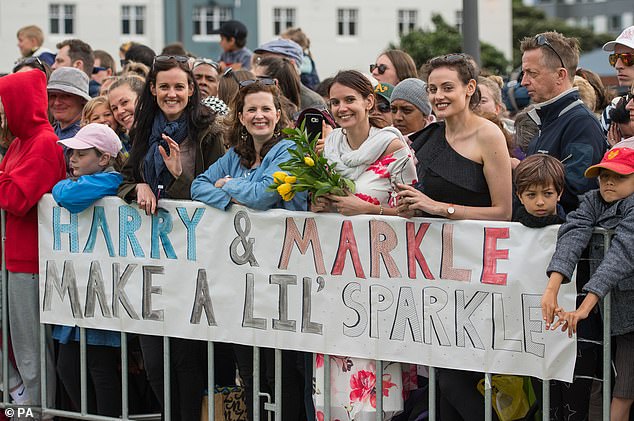 Many brought along eye-catching banners to greet Harry and Meghan, including this one that said ”Harry & Markle make a lil’ sparkle’ (pictured) 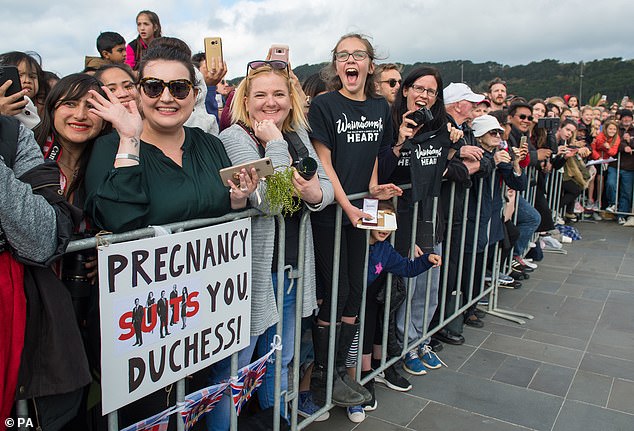 The huge crowds were seen cheering and waving as they gathered to catch a glimpse of the couple in Wellington. Pictured second left: A woman holds a sign that says ‘pregnancy suits you Duchess’, alongside a picture of Meghan as her suits character Rachel Zane

Two 10-year-olds who waited hours for a glimpse of the couple got more than they bargained for when the Duke and Duchess of Sussex agreed to pose for a picture.

The couple were given gifts including a Buzzy Bee – a popular toy from New Zealand – which Harry held in celebration after it was passed down through the rows of crowds. 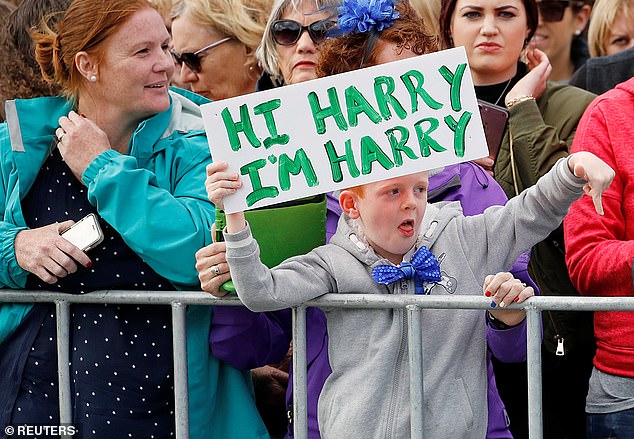 A young boy with red hair held up a sign that said ‘Hi Harry, I’m Harry’ (pictured) to catch the Duke’s, 34, attention 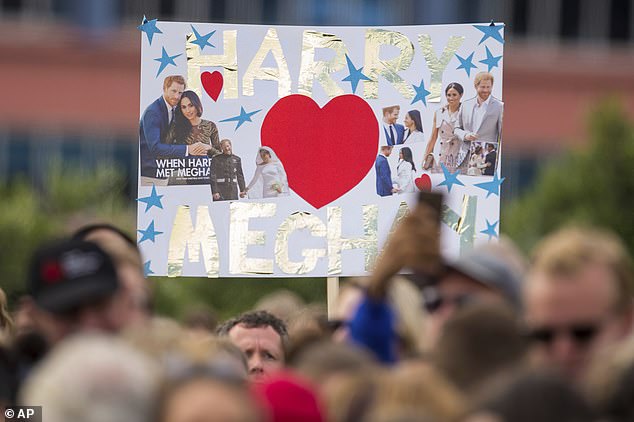 Many fans presented the couple with gifts, including a toy for their unborn child. Pictured: One fan holds up a sign they’d decorated with pictures of the couple 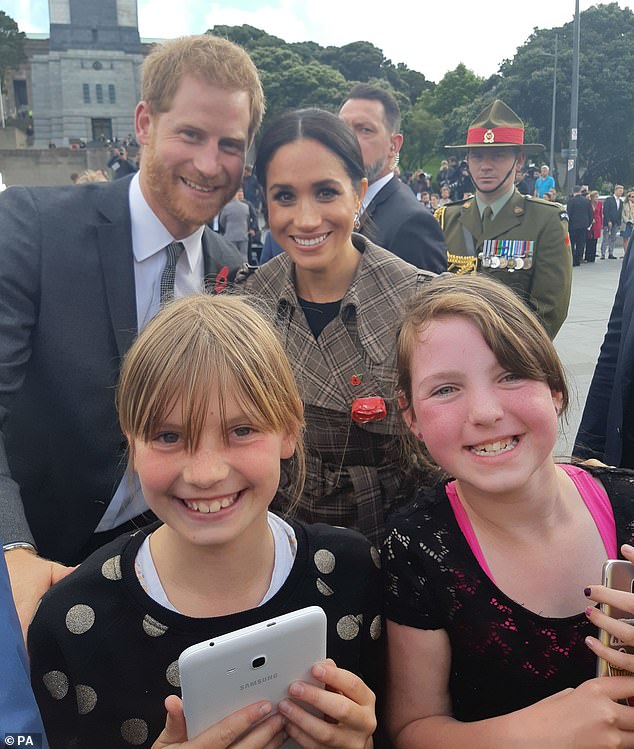 Harry and Meghan left Sophie Hubbard and Hope Watson, both 10, grinning from ear to ear after posing for a snap with them

Pictures of Harry’s brother, the Duke of Cambridge, playing with the toy during the visit of the Prince of Wales and Diana in 1983 made front pages around the world.

Meghan and Harry, 34, looked in high spirits as they received the warm welcome today. 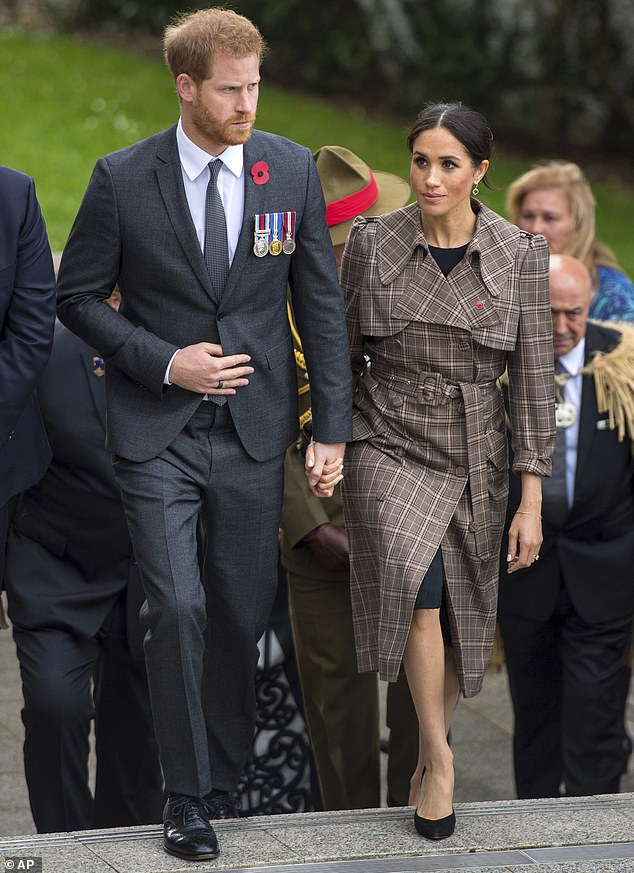 Both Harry and Meghan laid fern fronds on the Tomb of the Unknown Warrior, then laid a wreath before heading into the building

Both Harry and Meghan laid fern fronds on the Tomb of the Unknown Warrior, then laid a wreath before heading into the building.

Meghan spoke with several women, including one who told NewsHub she’d flown all the way from California to meet her, and had been able to speak with her about being biracial.

The Duchess was gifted flowers, a teddy bear, what appeared to be a bag of lollies, and a red flower which she pinned to her jacket, underneath her Anzac poppy.

Harry and Meghan will spend their evening at an official dinner, before kicking off Monday with breakfast at a cafe and then heading to the Abel Tasman National Park.