Prince Harry has furiously slammed down accusations that he ‘boasted’ about killing 25 Taliban fighters in his explosive memoir Spare – while accusing his critics of ‘spinning’ his words and spouting ‘lies’ about the revelation, which he says have put his family ‘in danger’.

The 38-year-old vehemently defended his decision to share the information as he sat down for an interview with The Late Show host Stephen Colbert – a pre-taped chat that was recorded on Monday night and is due to be aired in full this evening.

In a teaser clip for what will no doubt be another bombshell TV tell-all, Harry hit back at accusations that he ‘undermined his own security’ by writing about his Taliban kills, while blaming his critics for spreading ‘dangerous lies’ and ‘spinning his words’.

‘I think one of… the most dangerous lies that they have told is that I somehow boasted about the number of people I have killed in Afghanistan,’ he told Colbert.

‘I would say that if I heard anybody else, anyone, boasting about that kind of thing, I would be angry. But it’s a lie.

He added: ‘My words are not dangerous, but the spin of my words are very dangerous to my family.’ 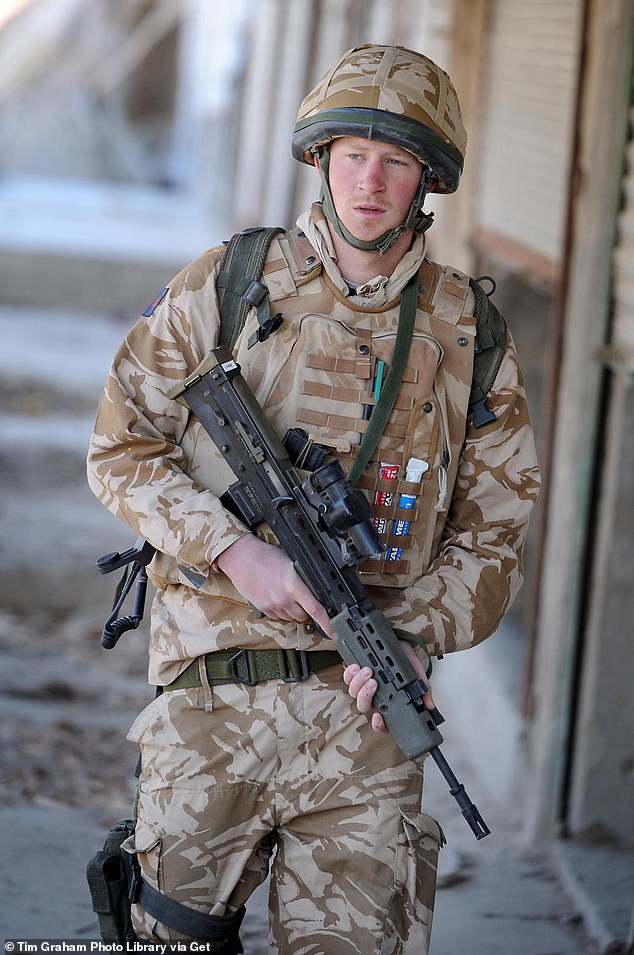 Harry, 38, faced serious criticism from politicians and former military members after leaked excerpts from his book revealed his recollections of killing Taliban members while he was serving as an Apache helicopter pilot

The Duke of Sussex faced serious criticism from politicians and senior former military members alike after leaked excerpts from his book – which were published after the book was accidentally released early in Spain – revealed his recollections of killing Taliban members while he was serving as an Apache helicopter pilot.

Harry, who was known as ‘Captain Wales’ in the military, wrote in Spare that he did not think of those killed as people but instead ‘chess pieces’ he had taken off the board.

The father-of-two, who during his second tour flew an Apache attack helicopter, said it was ‘not a fact that filled me with satisfaction but I was not ashamed either’.

In Spare, the Prince said that he flew on six missions that resulted in the ‘taking of human lives’.

While many soldiers do not know how many enemies they have killed in combat, the duke wrote that ‘in the era of Apaches and laptops’ he was able to say ‘with exactness’ the number of insurgents he killed.