The Duke of Sussex has met a landmine victim who famously brought Diana to tears 22 years ago during trip to Angola – as she revealed she named a daughter after the princess.

Sandra Thijika, who was pictured sitting on Diana’s knee, described the experience of meeting the royal as making her feel ‘complete’.

And when she met Prince Harry she described the encounter as a continuation of a long and beautiful story.

Sandra Thijika, who was pictured sitting on Diana’s knee, described meeting Prince Harry (pictured) as a continuation of a long and beautiful story

Harry ended his visit to Angola by meeting Ms Thijika, 38, a landmine victim who was famously pictured with his mother sitting under a fig tree in an orthopaedic workshop in Luanda in 1997.

The princess had not only walked through a partially cleared minefield in Angola to raise awareness about the issue of the weapons, but spent time with people maimed by the munitions laid during a bloody civil war.

Ms Thijika said after chatting to Harry: ‘I think I met Princess Diana on a Tuesday, she came to the centre and she wanted to see how a change of prosthetic limb was done. 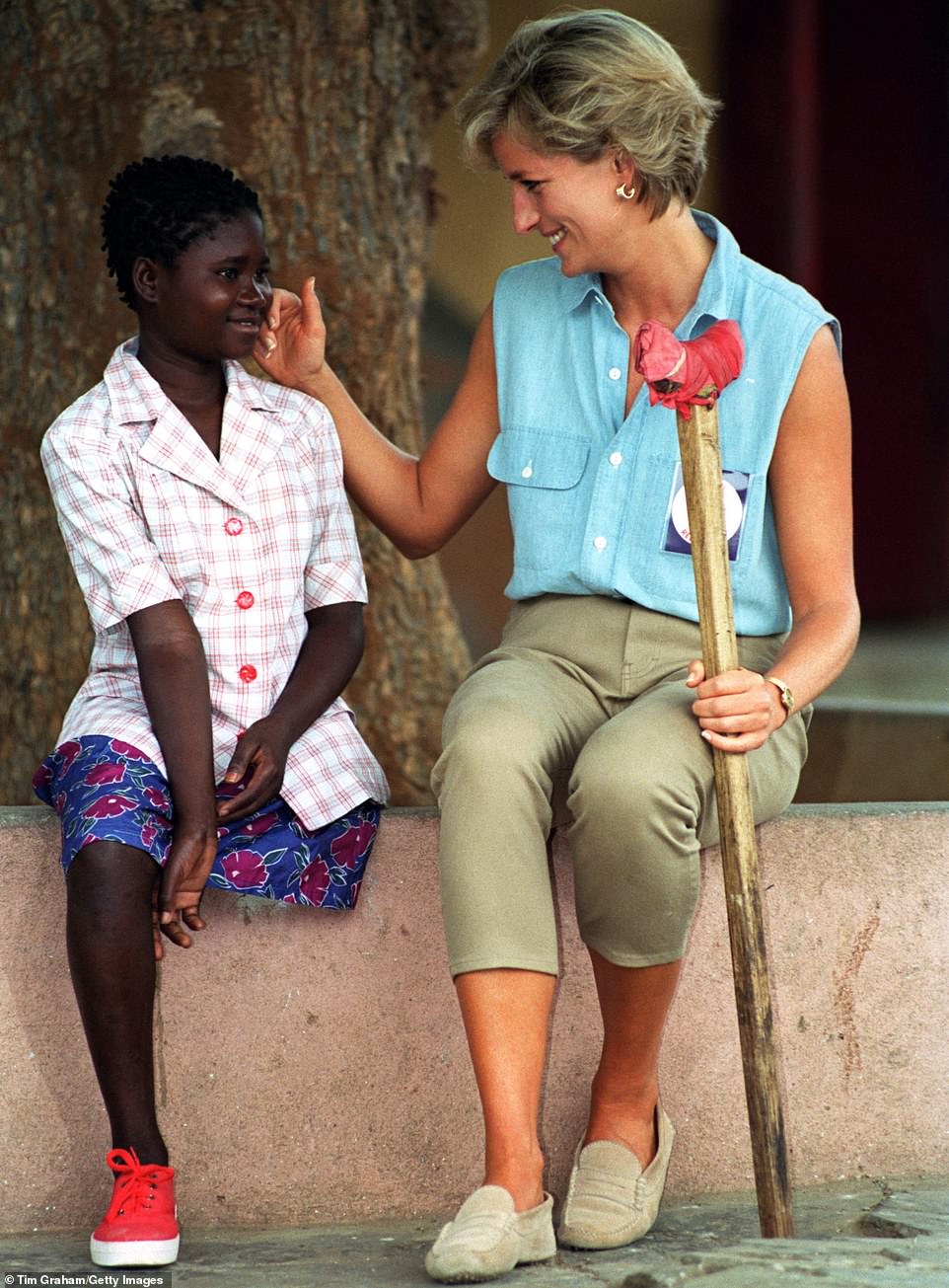 ‘At that time I was very small, I was a very tiny girl and they started measuring my knee so they could see how the prosthetic would fit.

‘Princess Diana was watching this process and she started crying as she watched me getting measured for a new prosthetic.

‘After they measured my knee we went outside and we sat by a fig tree and she was speaking to me and I felt very happy, I felt very complete to have the attention of a princess.

‘It was an honour to be sitting next to a princess.’

Ms Thijika was a special guest at a reception hosted by Jessica Hand, Britain’s Ambassador to Angola, at her official residence in Luanda.

Speaking about Angola’s £48million pledge to invest in the work of the landmine clearing charity Halo Trust in the country, the duke told Ms Thijika: ‘I know you will never get your leg back, but I hope with the president’s contribution…you will have some peace of mind.’

The mother told the duke she had five children, and the royal seemed taken aback and asked for their ages and she told him, speaking through an interpreter: ‘I have a daughter I named her after Diana.’ 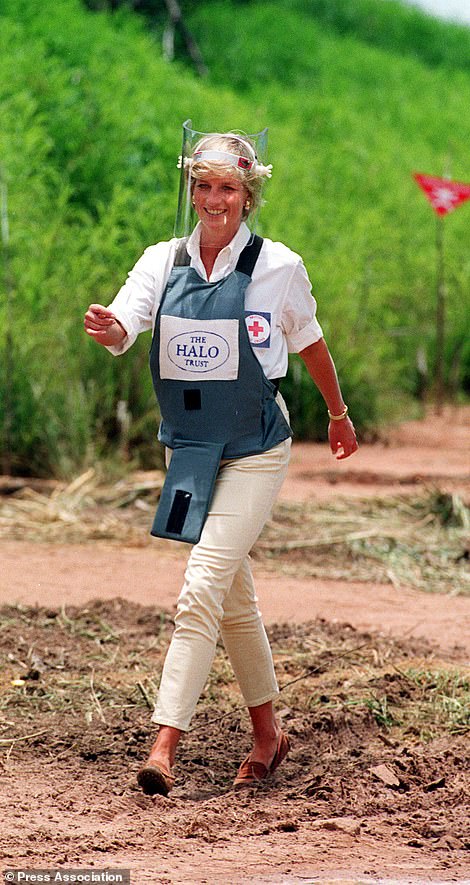 Earlier today the Duke of Sussex walks through a minefield in Dirico, Angola, during a visit to see the work of landmine clearance charity the Halo Trust 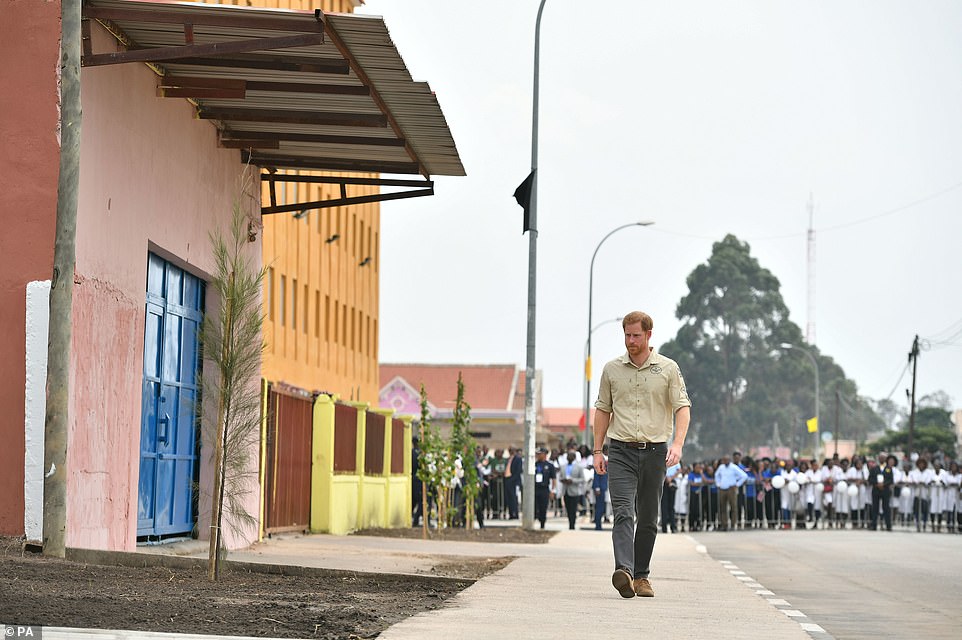 Locals watched on as Harry retraced his mothers steps – only this time he walked along pavement and past buildings, rather than through the dangerous zone in Angola his mother encountered 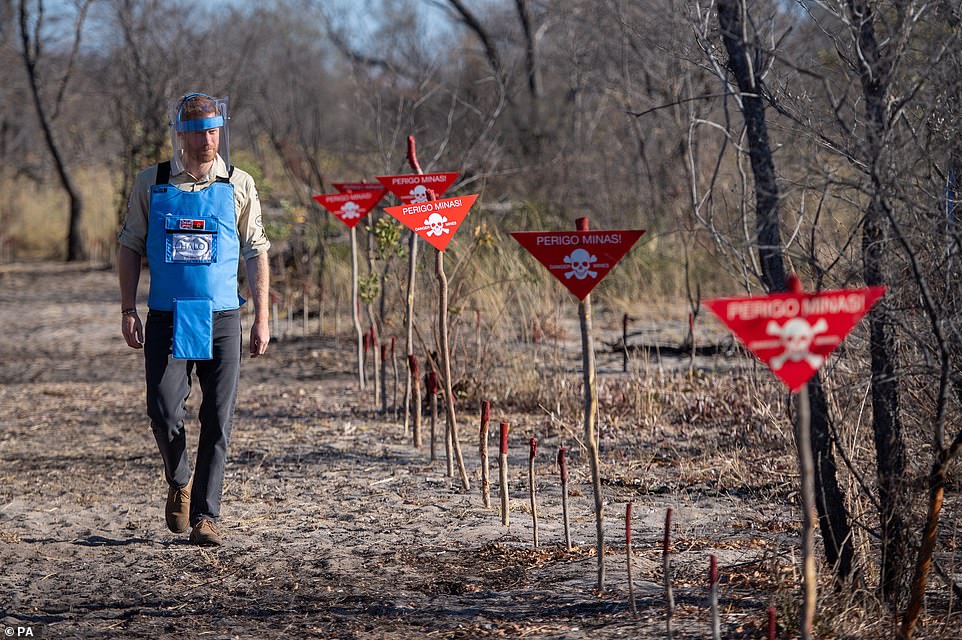 Harry was highlighting the ongoing threat of the munitions in Angola, the same nation Diana visited in 1997 to urge the world to ban the weapons 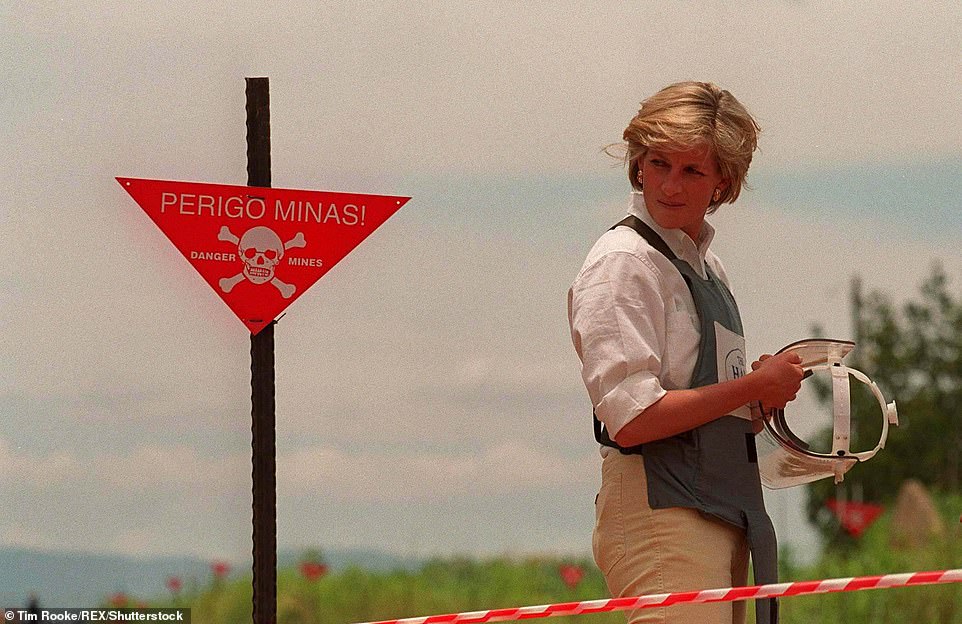 Harry sounded a positive note, telling her: ‘Your children will be growing up to your age and there won’t be any landmines.’

In response to Harry’s pledge, the 38-year-old said: ‘I’m very happy to hear him say that, it feels like the work in Angola will continue and we will be landmine free.’

She said about meeting Harry: ‘This is a long story and this is a beautiful story because I’ve come out of the province to meet Diana’s son, so this is putting the focus on all of us who have physical disabilities.