Prince Harry and Oprah Winfrey’s mental health TV series has released its star-studded first trailer – featuring Meghan, Archie and a major hint the Duke of Sussex may pour his heart out again about his relationship with his father.

The Apple TV show ‘The Me You Can’t See’ set for broadcast on Friday, features tearful interviews with Lady Gaga, Glenn Close and Ms Winfrey herself as well as a feature on a Syrian refugee named Fawzi, described as a hero on the programme.

The stand-out feature of the two-minute trailer comes when footage of the 13-year-old Duke watching the coffin of his mother Princess Diana’s passing him during her London funeral in 1997 is shown.

Prince Charles can be seen speaking to his heartbroken son as a female voiceover says over dramatic music: ‘Treating people with dignity is the first act’. Harry tells Oprah: ‘To make that decision to receive help is not a sign of weakness. In today’s world more than ever, it is a sign of strength.’

The 2.36-minute promo, which was released on the Archewell website and YouTube, hints heavily that Harry will again talk about his decision to quit as a frontline royal to ‘break the cycle’ of ‘genetic suffering’ from his British family and protect his own mental health.

And at one point Meghan can be seen looking over Harry’s shoulder at a computer as she wears a ‘Raising The Future’ t-shirt in their LA mansion. Her £27 top is made by British designer Mere Soeur, which makes clothing for mothers describing parenting as ‘the greatest and hardest job you’ll ever have’.

The Duchess also appears cuddling their son Archie, who the Sussexes was subject to racism from the Royal Family.

Its release come amid a backlash in the US after Harry’s attack on ‘bonkers’ First Amendment that protects free speech and days after he launched another broadside at the Royal Family in which he appeared to suggest both his father and the Queen failed as parents.

The Duke of Sussex told Dax Shepard, host of the ‘Armchair Expert’ podcast: ‘He (Charles) treated me the way he was treated, so how can I change that for my own kids?’ Harry then described his life as a cross between the film The Truman Show – in which a man discovers he is living in a reality TV programme – and a zoo.

Harry appears with Meghan in the trailer for the film, which is said to have been two years in the making and will be broadcast on Apple TV on Friday. The Duchess doesn’t appear to be heavily pregnant, suggesting it was filmed late last summer. The couple’s daughter is due next month 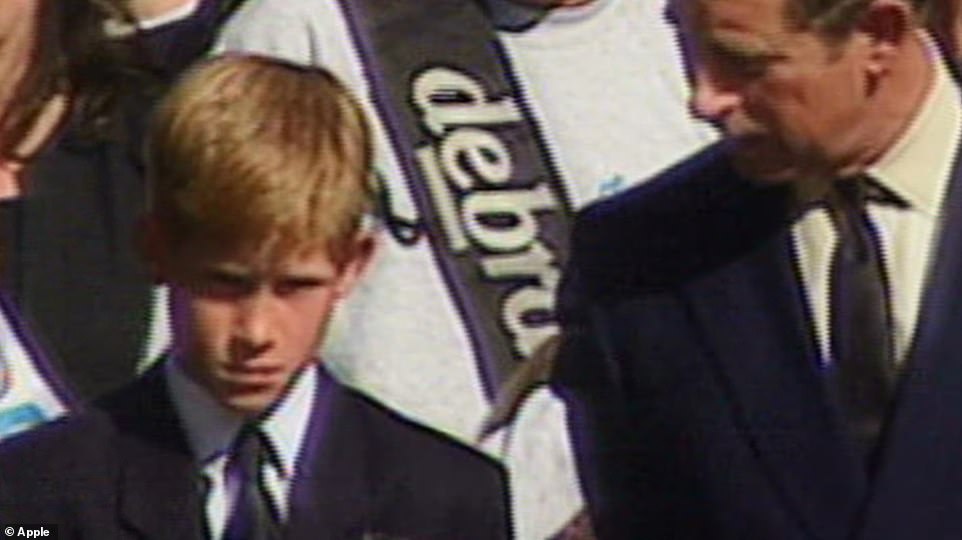 The show shares the moment Prince Charles speaks to his son as Diana’s coffin passes them, with a narrator talking about the importance of being treated with ‘dignity’ 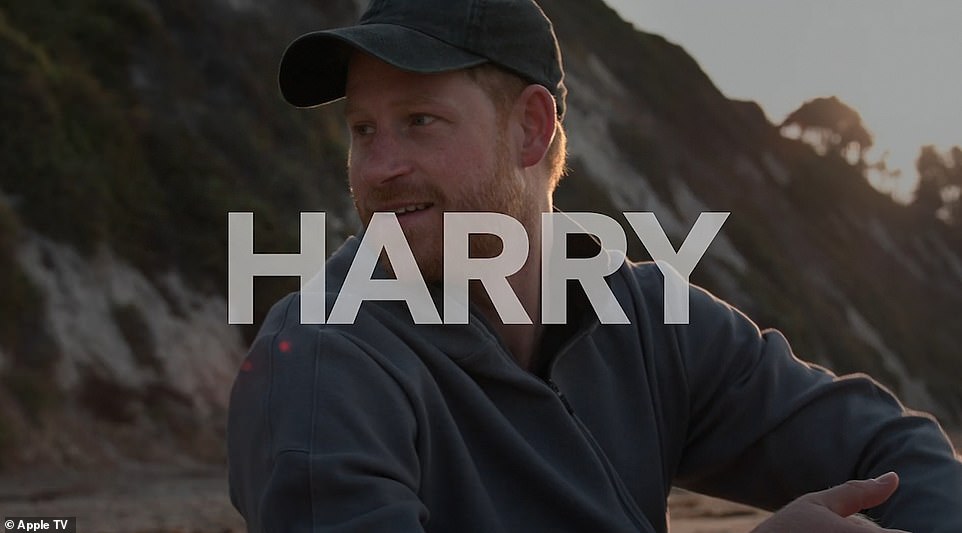 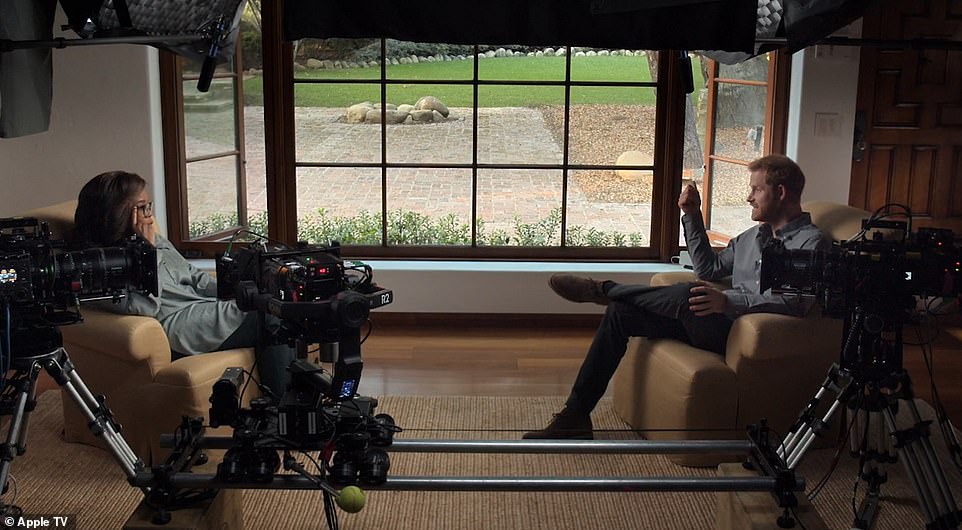 Harry speaks to Oprah about the bravery of those who seek help, before Ms Winfrey also becomes tearful as she describes having to ‘accept’ her own problems 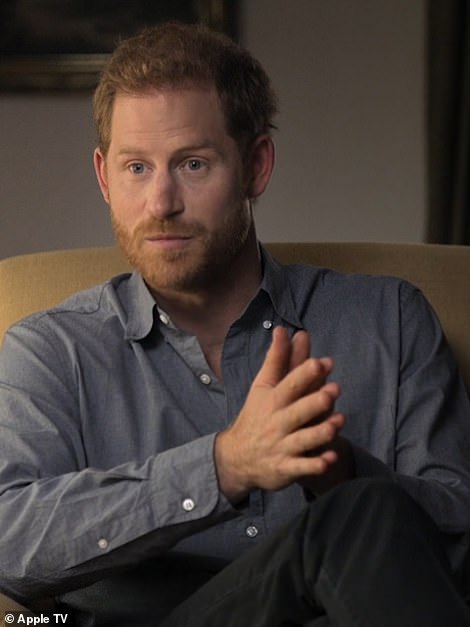 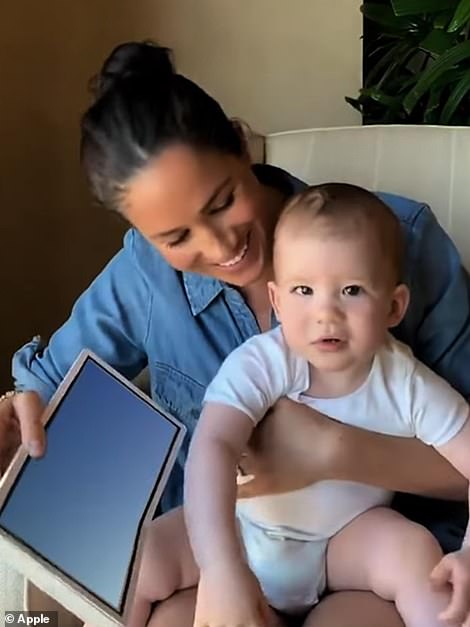 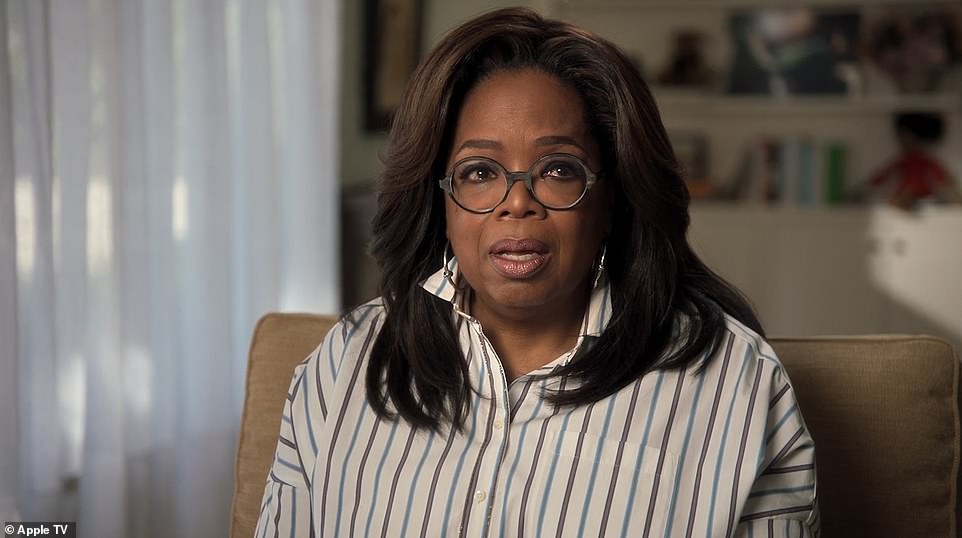 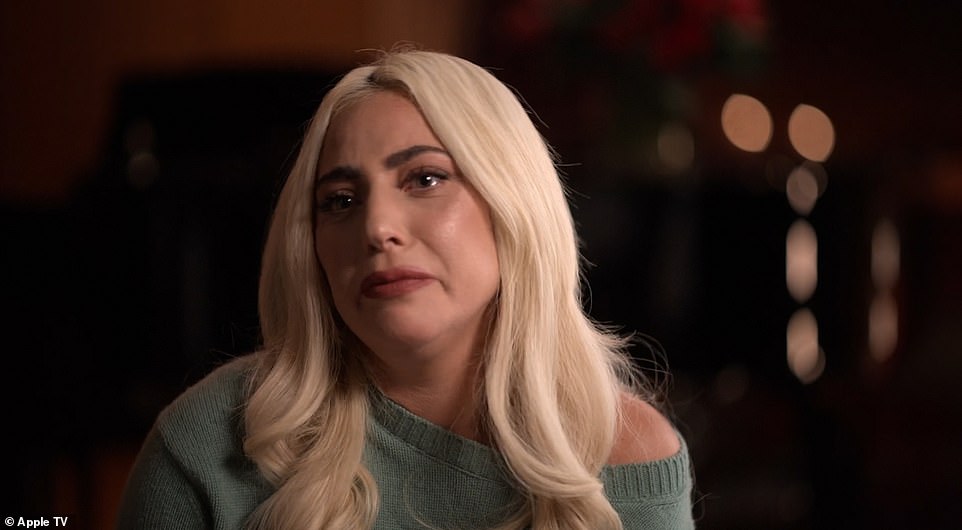 Lady Gaga is one of many famous names to cry, describing how she ‘froze’ when she struggled with her mental health

Other guests on the show include Lady Gaga and actress and producer Glenn Close.

Harry is seen saying: ‘What words have you heard around metal health? Crazy?

‘In today’s world more than ever, it is a sign of strength

‘The results of this year will be felt for decades, the kids the families, husbands, wives everybody.’

At that moment a picture of Meghan and Archie is flashed on the screen.

The Apple TV+ series will begin on Friday May 21 and singer Lady Gaga, actress Glenn Close, Syrian refugee Fawzi, and DeMar DeRozan of the NBA’s San Antonio Spurs, all appear in the trailer.

Lady Gaga and Glenn Close, along with Winfrey, appear close to tears as they discuss their experiences.

Meghan makes a brief appearance, coming into shot at Harry’s side.

The duchess is smiling and wearing a T-shirt printed with the slogan ‘Raising the Future’.

The Sussexes’ son Archie is also shown sitting on his mother’s lap later on – in footage filmed around the time of his first birthday.

The duke and Winfrey have joined forces to guide ‘honest discussions about mental health and emotional wellbeing while opening up about their personal journeys and struggles’, the Archewell website said.

Harry adds in the footage: ‘The results of this year will be felt for decades. The kids, families, husbands, wives, everybody.’

Harry and Winfrey are co-creators and executive producers of the project.

The Sussexes made a series of damaging allegations about the royal family when they were interviewed by Winfrey earlier his year.

The couple accused an unnamed royal, not the Queen or Philip, of raising concerns about how dark their son Archie’s skin tone would be, before he was born.

Meghan also said she asked for help when she was suicidal, but said the monarchy gave her no support.

Harry has spoken of the emotional turmoil he faced after his mother was killed in a Paris car crash in 1997, saying he spent nearly two decades ‘not thinking’ about her death before eventually getting help after a period of ‘total chaos’. 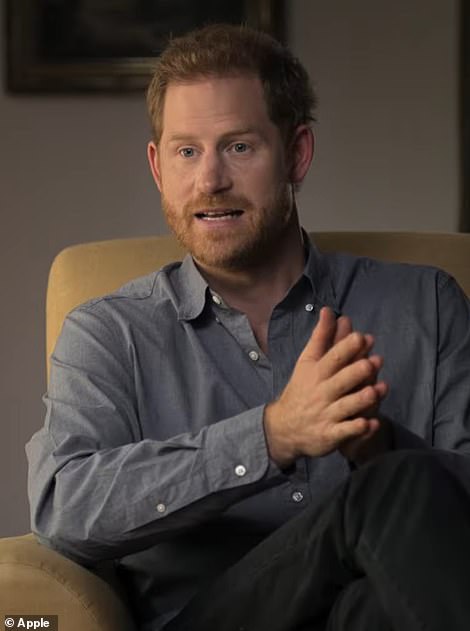 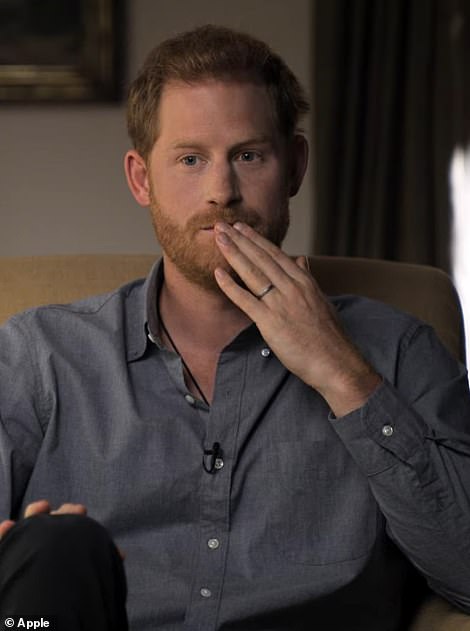 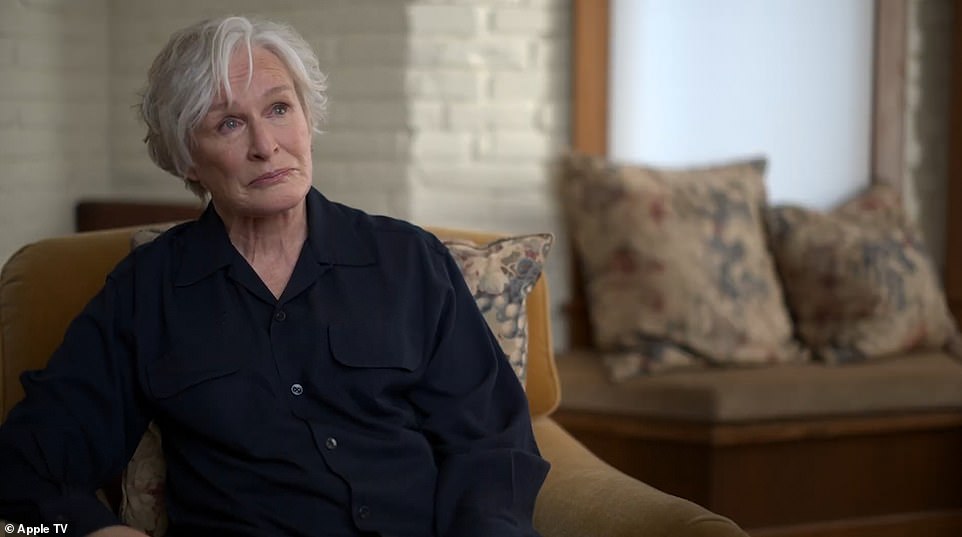 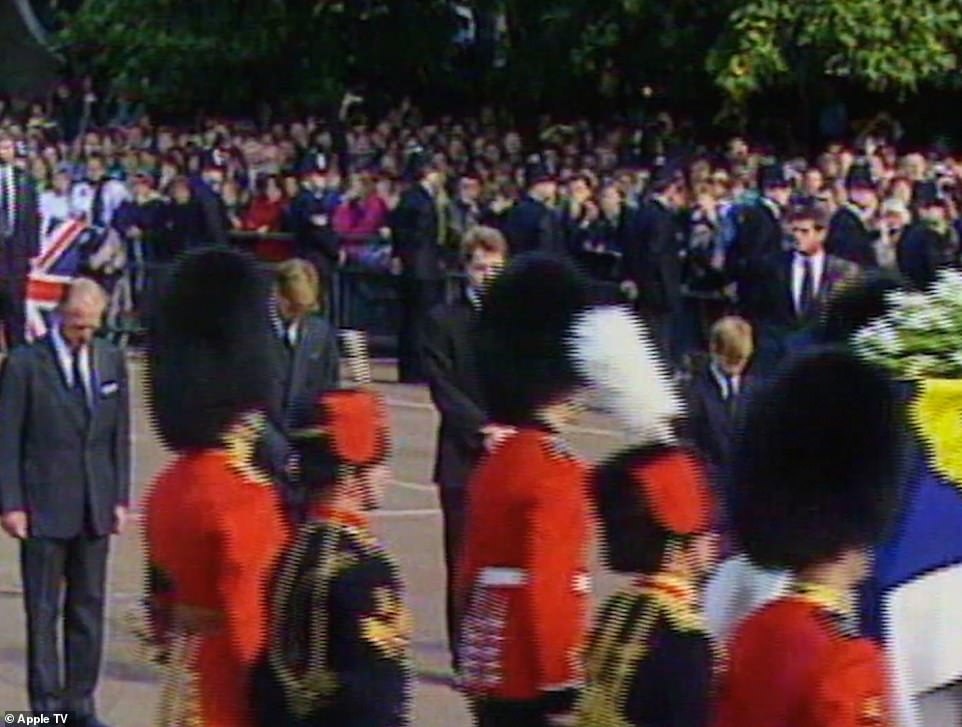 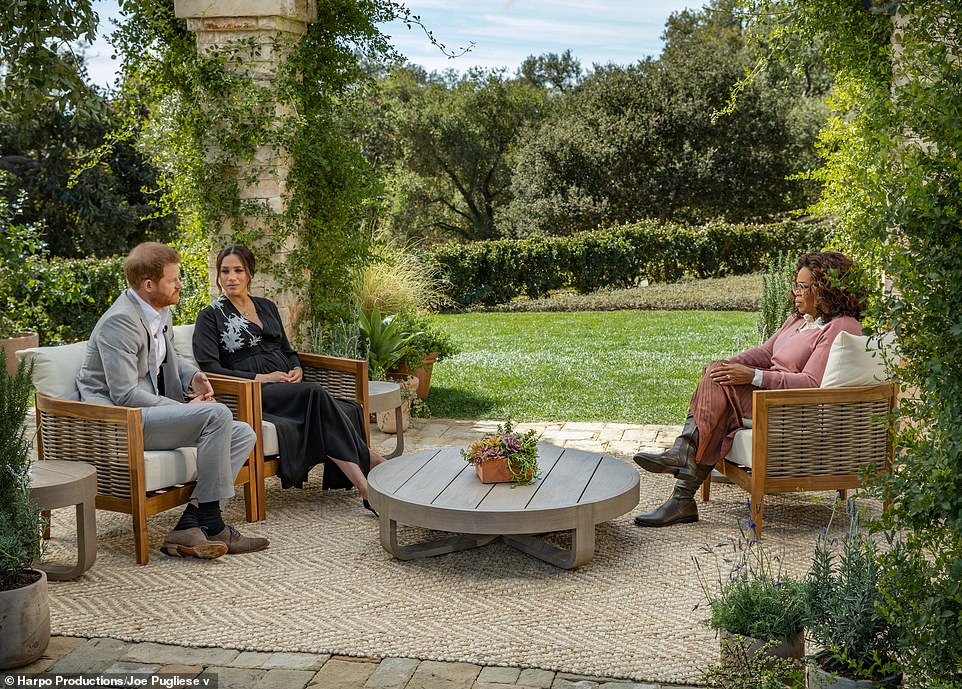 It comes just days after Prince Harry suggested he took drugs as he spoke about ‘going wild’ during a chat with a Hollywood star about their own drugs and alcohol problems.

The Duke of Sussex, 36, was speaking on actor Dax Shepard’s ‘Armchair Expert’ mental health podcast when he made the remarks.

Harry was quizzing the star – who is married to Frozen actress Kristen Bell –  about the American’s substance use in high school.

The Royal asked him about Shepard’s ‘awareness’ of what sparked his path towards drugs as a teenager.

Harry told him ‘For you it was your upbringing and everything that happened to you – the trauma, pain and suffering.

‘All of a sudden you find yourself doing a s***load of drugs and partying hard.

‘Look how many other people do that as well. They wouldn’t have the awareness at the time.

‘I certainly wouldn’t have had the awareness when I was going wild.

Harry, who is expecting a daughter with Meghan this summer, suggested Charles had ‘suffered’ because of his upbringing by the Queen and Prince Philip, and the Prince of Wales had ‘treated me the way he was treated’, calling it ‘genetic pain’.

During the wide-ranging interview lasting 90 minutes, Harry – who appears to have developed an American twang to his British accent since leaving the UK – said: ‘I don’t think we should be pointing the finger or blaming anybody, but certainly when it comes to parenting, if I’ve experienced some form of pain or suffering because of the pain or suffering that perhaps my father or my parents had suffered, I’m going to make sure I break that cycle so that I don’t pass it on, basically.

‘It’s a lot of genetic pain and suffering that gets passed on anyway so we as parents should be doing the most we can to try and say ‘you know what, that happened to me, I’m going to make sure that doesn’t happen to you’.’

He added: ‘I never saw it, I never knew about it, and then suddenly I started to piece it together and go ‘OK, so this is where he went to school, this is what happened, I know this about his life, I also know that is connected to his parents so that means he’s treated me the way he was treated, so how can I change that for my own kids’. And here I am, I moved my whole family to the US, that wasn’t the plan but sometimes you’ve got make decisions and put your family first and put your mental health first.’