He’s apart from his pregnant wife Meghan who has remained in London during his two-day visit to Zambia.

But Prince Harry had plenty to brighten his mood this morning as he met with colourfully dressed circus performers in Lusaka.

Unusually for the 6’1″ royal, he found himself being towered over by a clown on stilts as he visitied Circus Zambia at the Queen’s Commonwealth Trust event in Lusaka.

Circus Zambia was founded by Gift Chansa and friends from Chibolya, a district of Lusaka that faces many challenges.

The organisation equips young people from vulnerable backgrounds across Lusaka with life skills while providing educational and employment opportunities.

In a speech during the visit, Harry touched on his wife’s absence saying that Meghan sends her ‘very best wishes’.

The pregnant Duchess has remained in London, amid reports she’s exhausted by her pregnancy and wanted to rest rather than making a 10-hour flight for a short visit.

Pleased to meet you! Prince Harry meets a clown on stilts while attending Circus Zambia at Queen’s Commonwealth Trust event

The Duke of Sussex looked delighted as he posed for photos with members of CAMA, the alumnae network of CAMFED, which tackles poverty and inequality in sub-Saharan Africa through the education of girls and the empowerment of young women 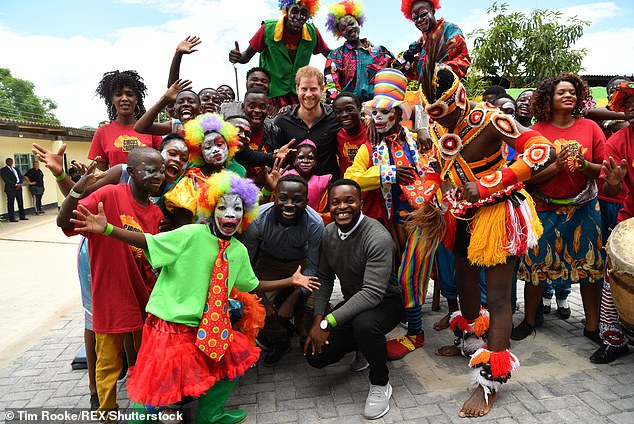 Not your average royal engagement! Harry had fun this morning as he met performers from Circus Zambia at the Queen’s Commonwealth Trust event 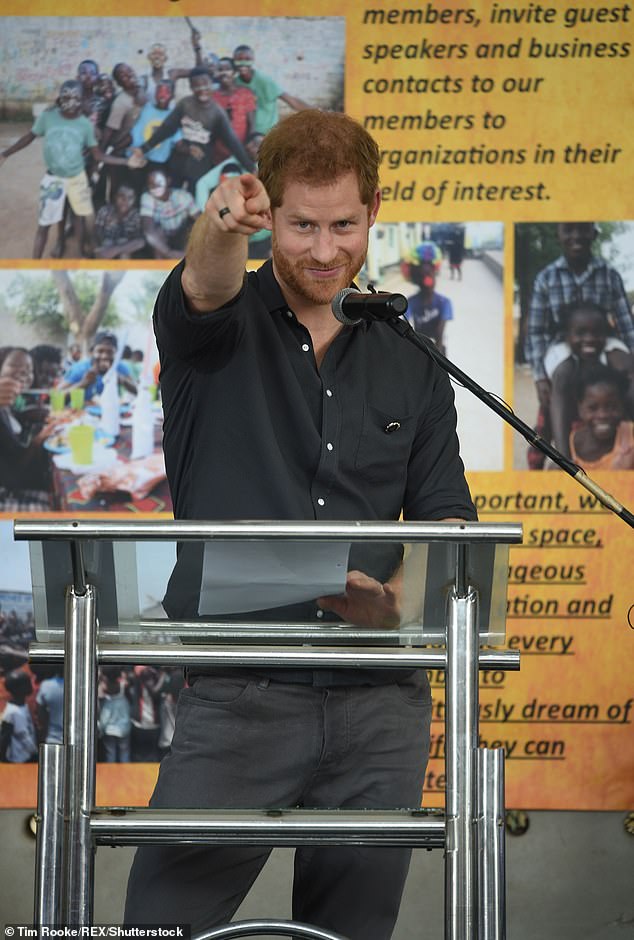 During a speech at the Queen’s Commonwealth Trust, Prince Harry passed on his pregnant wife Meghan’s ‘very best wishes’

During the visit, he also met with members of CAMA, the alumnae network of CAMFED, which tackles poverty and inequality in sub-Saharan Africa through the education of girls and the empowerment of young women

Harry kicked off today with an engagement celebrating veterans, a subject close to his heart.

The royal paid a visit to Burma Barracks to attend an event commemorating the contribution of Zambian’s forces during the First and Second World Wars.

Harry, 33, who looked dapper in a pale grey suit and dark tie, looked in great spirits as he met with WW2 vets and war widows.

The Duke looked animated as he laughed and joked with veterans who were all wearing Remembrance poppies pinned to their suit jackets, and white baseball caps bearing the symbol. 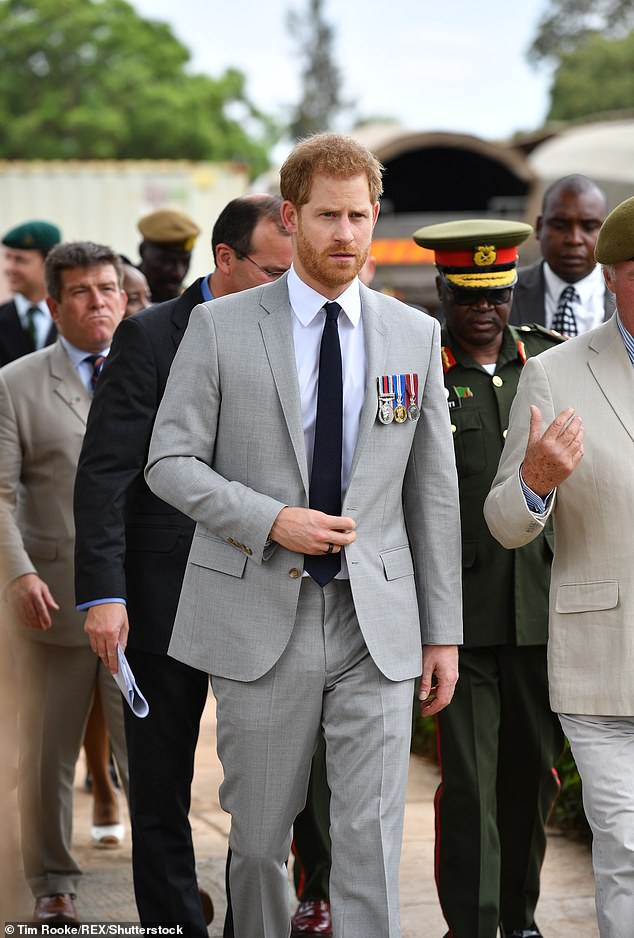 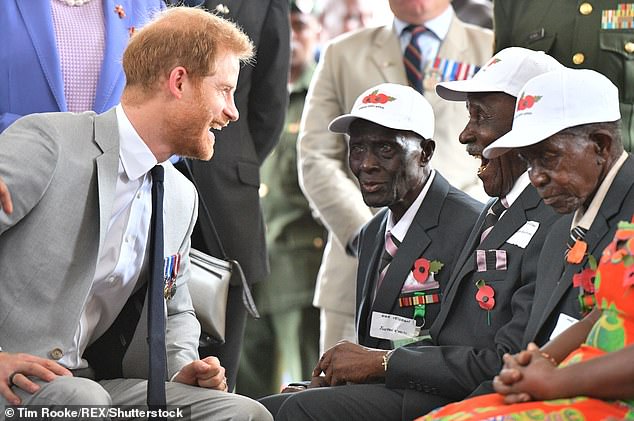 Harry laughed as he shared a joke with veterans who were all wearing Remembrance poppies pinned to their suit jackets, and white baseball caps bearing the symbol

He will also travel to BongoHive, Zambia’s first technology and innovation hub. The organisation provides a range of start-up and tech programmes, workshops and events all focused on making Zambia Africa’s next hotbed of innovation.

The Duke of Sussex is the latest member of the monarchy to visit Africa in the wake of Theresa May’s push to deepen trade ties with the continent following Brexit.

Harry is following in the footsteps of the Prince of Wales and Duchess of Cornwall – who toured three African nations earlier this month.

Theresa May made a high profile trade mission to Kenya, South Africa and Nigeria during August and September, in an attempt to bolster Britain’s post-Brexit fortunes. 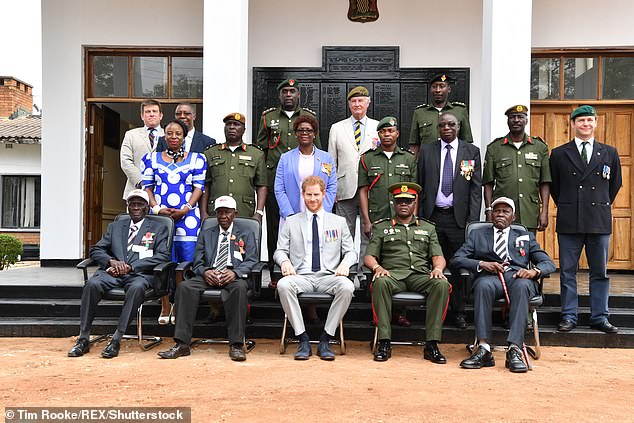 The duke highlighted the growing economic ties between the UK and Zambia during a reception which celebrated the relationship between the two countries last night.

He told guests: ‘Britain is Zambia’s oldest relationship. It is one that has thrived over the past 54 years, and it continues to evolve – from the UK’s development assistance, to growing mutually beneficial trade and investment.

‘The British Chamber of Commerce is exemplary of that. 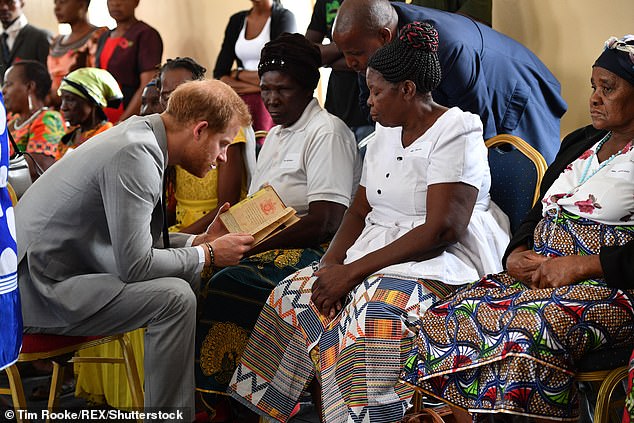 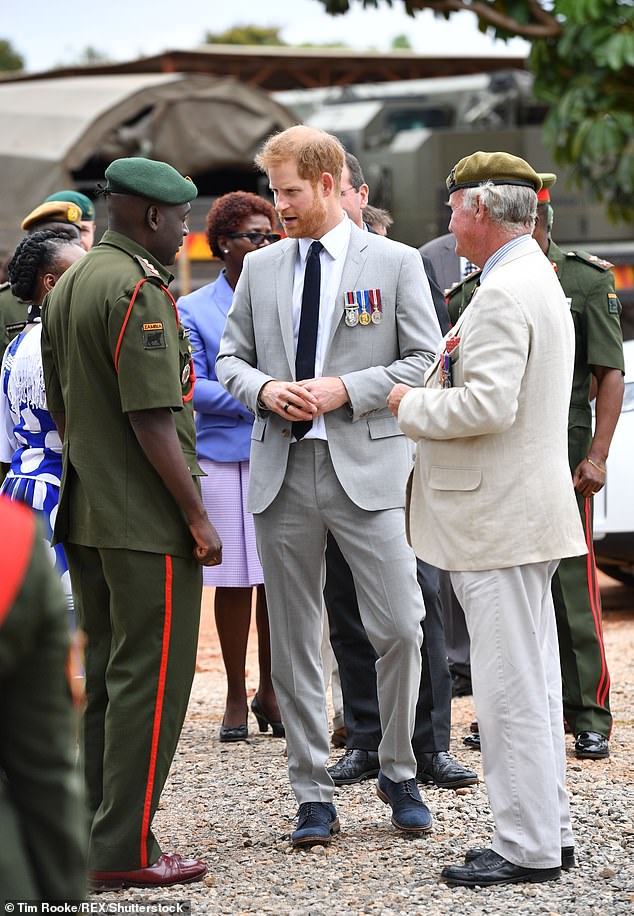 The Duke’s first engagement of the day at Burma Barracks celebrated veterans, a cause close to the former soldier’s heart 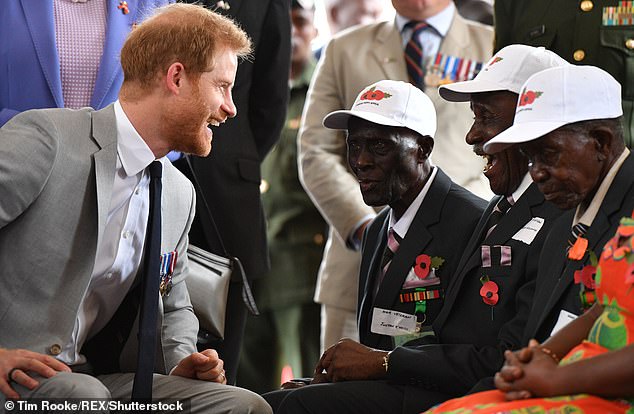 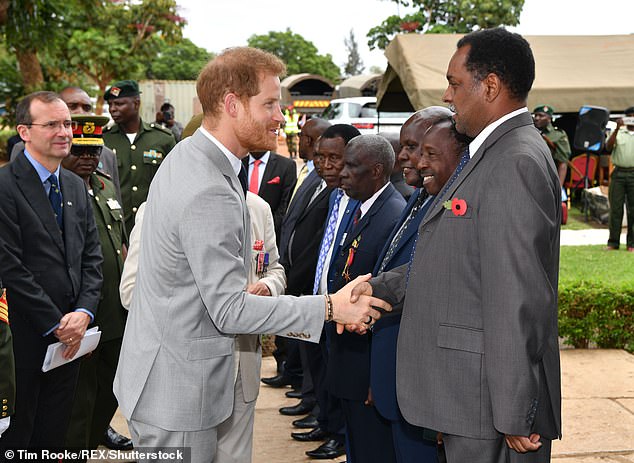 Warm welcome: The royal was greeted by staff and dignitaries as he paid a visit to Burma Barracks in Lusaka this morning 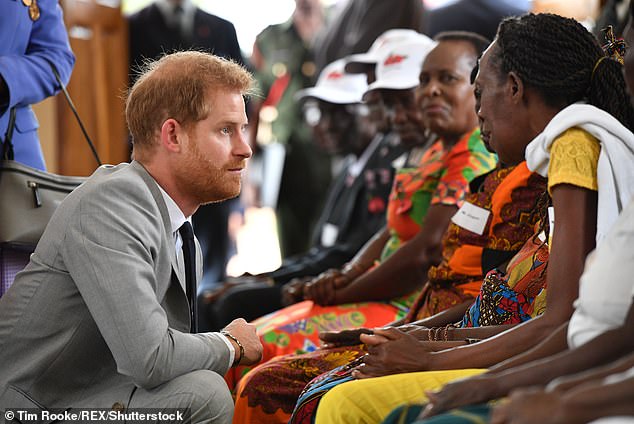 Taking time: Prince Harry crouched down to speak to people as he was introduced to veterans and widows at Burma Barracks

‘The chamber, working together with the British High Commission, has launched an effort to contribute to Zambia’s economic development – making it easier to do business in Zambia, and encouraging more British companies to trade and invest here.’

Speaking at the residence of Fergus Cochrane-Dyet, Britain’s High Commissioner to Zambia, Harry added: ‘There are many well-established British companies here already and more are arriving. By creating jobs and wealth, the private sector is a catalyst to ending poverty.’

Earlier yesterday, the duke met Zambia’s president Edgar Lungu during a meeting at State House in the capital Lusaka.

A speech by Prince Harry at Circus Zambia in Lusaka

It’s really wonderful to be here at Circus Zambia and thank you for hosting us today, this is clearly an exciting place to be!

I also wanted to thank our friends from CAMA for joining us and taking time out of your important Annual General Meeting to be with us today. You have filled this place with song and your optimism is infectious – what a wonderful introduction to your work.

I know my wife, Meghan, had a wonderful meeting with Angeline Murimirwa from your team this past spring, and sends her very best wishes to you all.

All the stories we heard today are powerful reminders of the great work underway here in Lusaka and across Zambia, Ghana, Tanzania, Malawi and Zimbabwe. All brought about by young people, like you, who have stepped up to make a difference for others.

About a year ago, I was standing on another stage, this time at Buckingham Palace, alongside my grandmother Her Majesty The Queen to launch The Queen’s Commonwealth Trust – a platform designed to connect and support young people who are carrying out outstanding work in their communities and across the commonwealth

The Queen has travelled to every country in the Commonwealth, and throughout her life has been massively encouraged by what she has seen young people achieve

As President of The Queen’s Commonwealth Trust and Her Majesty’s Commonwealth Youth Ambassador, I see the great strides you are taking every day in the service of others and how lives and communities are being impacted by this work. And I can see the satisfaction you get from it too – which is fantastic! When you give, you receive so much more – something which each of you seem to know intrinsically.

On our recent visit to Fiji, Tonga, New Zealand and Australia, my wife and I met so many young people who were quite literally changing the lives of their communities with innovative, creative ideas and quality leadership.

I also know that for far too long, you and other young leaders have struggled to secure funding, recognition and support – despite all the important work you’re doing. Too often funders and investors miss what you’re doing because they can’t find you or see what you’re achieving. As a result, opportunities for both parties are lost.

We established The Queen’s Commonwealth Trust to be your platform. The place where your voices can be heard, where your work is seen and taken seriously, and your experiences and insight are shared with others to create the maximum impact – for what the world really needs right now.

This was our dream a year ago in Buckingham Palace. It is incredibly exciting to see the reality today. To see the results of your work and how you’re connecting with organisations near and far in the drive towards creating a brighter future for us all. You have the knowledge and relatability that will inspire your generation to get started in a big or small way, unleashing a wave of talent right around the world.

This is the purpose of The Queen’s Commonwealth Trust, to champion, fund and connect young people as a global movement for good, with youth of today leading the way. Thank you for carrying out this vision with such pride, impact and fearlessness in pursuit of what is right. It is my complete joy to be here to see your work in action. This is just the beginning.