The Duke of Sussex plays ‘the naughty kid of the Royal Family’ when his wife Meghan Markle and son Archie are not around, a body language expert said today.

Judi James said the trait was displayed when Harry joked about minding the grass on the makeshift rugby pitch at Buckingham Palace or he would get into trouble.

She added that checking his shoes for mud suggests he sees himself as a ‘naughty or rebellious kid who is currently wanting to be seen on his best behaviour’.

And Ms James said he fiddled with his wedding ring in a move that suggests he is ‘summoning’ the virtual support of Meghan, who is in Canada with their son Archie.

She told MailOnline: ‘Yes, it’s a self-comfort gesture that usually suggests someone is coping with potential pressure by ‘summoning’ the virtual support of people who love them, in this case presumably Meghan although the gesture can also suggest he’s missing his son Archie too.’

Ms James added: ‘Overall it was energetic and upbeat body language with Harry’s solo appearance here meaning he’d lost the signs of protective, watchful anxiety without his wife and baby to worry about in front of the Press.’ 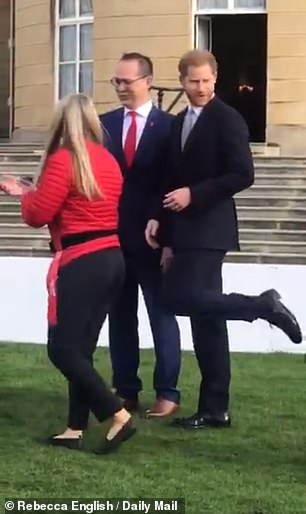 Harry checks his shoes for mud on the grass

She also said Harry’s ‘pace of appearance’ contrasted with his brother Prince William and Kate in Bradford yesterday who ‘lingered and slowed’ to greet crowds.

Speaking about him joking around, she said: ‘His joke about minding the grass or he’d get into trouble placed him firmly in empathy mode as the naughty kid of the Royal Family.

‘His body language made him look like that popular supply teacher who can be in charge but also one of the kids themselves.

‘The mud-checking was another gesture that suggested Harry sees himself as a bit of a naughty or rebellious kid who is currently wanting to be seen on his best behaviour.

‘It also suggests he sees himself as a bit of a visitor at the Palace and slightly in awe of the place but with a sense of good humour too.’

Harry refused to answer a question from the Press about how discussions are going on his future within the Royal Family. 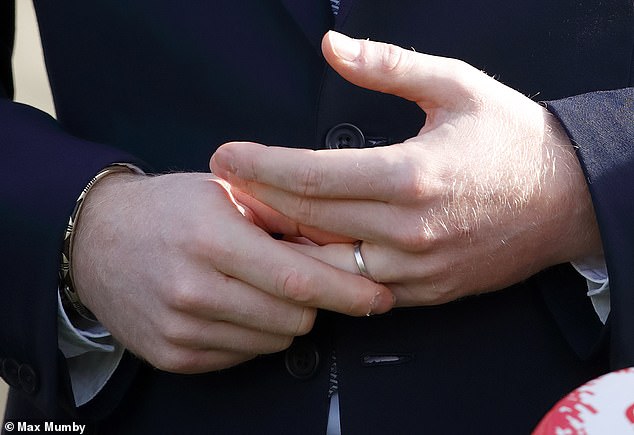 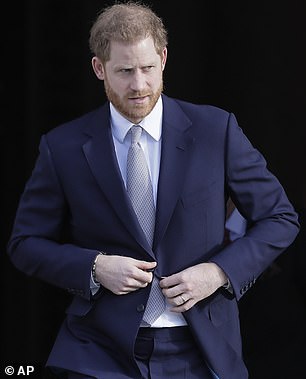 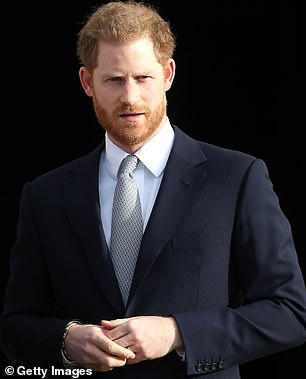 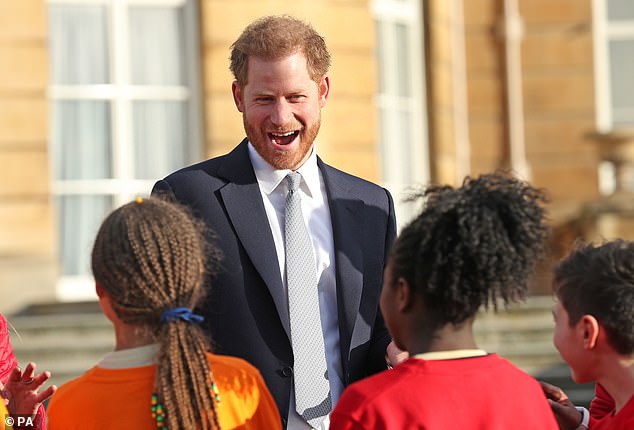 And Ms James said: ‘Harry utterly blanked the press question and the one handed barrier gesture had started before it was shouted, so his technique appeared to be to ignore the press and continue as though he hadn’t heard it.’ 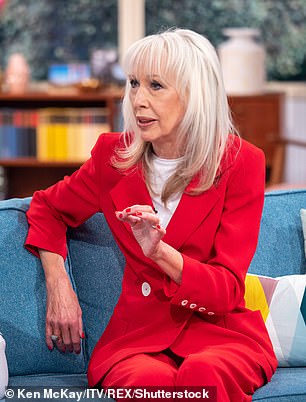 Ms James said Harry displayed ‘staccato movements’ and had a ‘desire to be relaxed and more active and casual’ in the gardens this morning.

She added that his gesticulation became ‘perky and upbeat’ and he gave a thumbs up to reassure guests before he hosted the Rugby League World Cup 2021 draw.

Ms James told MailOnline: ‘After all the pressures of the last few days Harry’s grin was back at long last in this solo public appearance, along with a splayed chest and signature jaunty walk, although his staccato movements and the pace he set also suggested a man in a hurry to get things done, too.

‘His splaying made him look very much the host at the Palace as he used directive pointing gestures to steer his guests in the garden.

‘His anxiety, self-comfort rituals appeared to have diminished and instead of using the ‘paper clip’ hand as a barrier gesture to suggest a desire to hide as he has in the past, he soon converted it into an unbuttoning gesture as he let his jacket fall open, hinting at a desire to be relaxed and more active and casual here. 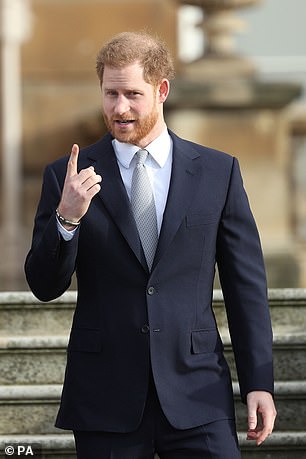 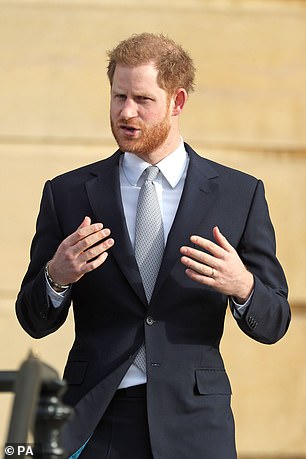 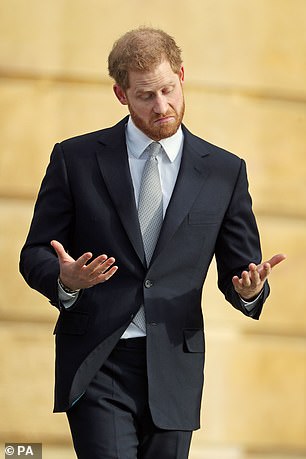 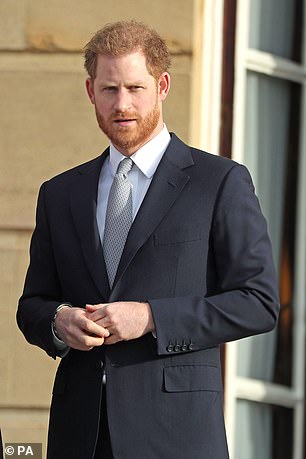 The Duke of Sussex was today at Buckingham Palace, the official residence of his grandmother the Queen, who has now sanctioned his decision to step down as a senior royal

‘His pace of appearance was interestingly in contrast with William and Kate’s behaviour yesterday: as the Cambridges to greet the screaming crowds, Harry kept up a bit of a dash, although he might have been concerned for his guests in the cold weather.

‘His gesticulation became perky and upbeat as he even offered a quick thumbs up gesture at one point, presumably to reassure his guests and himself that everything was going to be alright.’

Harry today carried out his first official public engagement since he and his wife quit as senior royals, triggering a major crisis for the monarchy.

The Duke of Sussex was at Buckingham Palace, the official residence of his grandmother the Queen, who has now sanctioned his decision.

Dozens of photographers lined a makeshift mini rugby pitch on the manicured lawns in the palace garden, waiting for the duke to arrive. 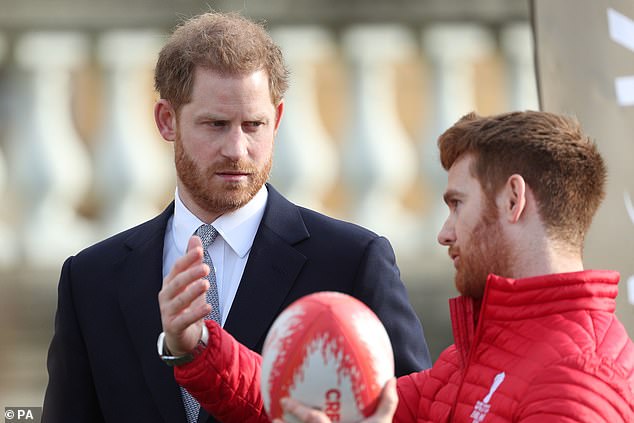 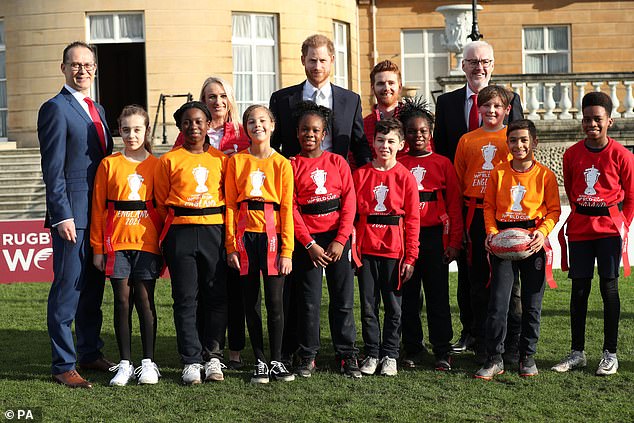 The Duke of Sussex and Jon Dutton (left), chief executive of the Rugby League World Cup 2021, pose with children who were playing rugby in the Buckingham Palace gardens in London today

Harry, dressed in a smart suit and tie, smiled and joked when he was welcomed by RLW2021 chief executive Jon Dutton and non-executive director Stuart Cain.

Children from a local school gave a rugby demonstration as the duke chatted enthusiastically to the executives.

Royal aides are working around the clock to find solutions to the crisis caused by Harry and Meghan’s plans to step back as senior royals, become financially independent and split their time between the UK and Canada.

The duke chatted to the youngsters from St Vincent de Paul Catholic Primary School in Westminster during a pause in their exhibition match, shaking each of their hands in turn.

He then posed for a group photograph in front of the large crowd of photographers, camera operators and journalists.

One of the reporters shouted out: ‘How are the discussions going on your future?’

Harry, who was making his way into the palace, just smiled at a member of his entourage and did not reply. 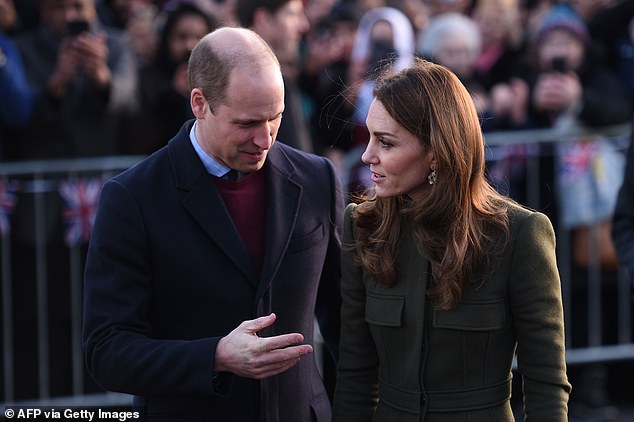 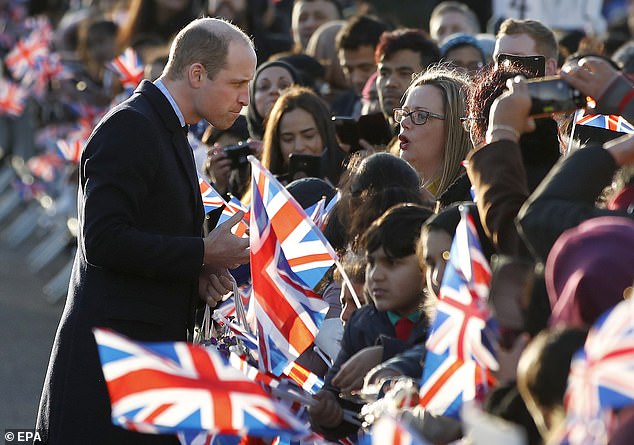 The duke is staying in the UK into next week, taking part in meetings as talks continue on his future.

The Queen, who made a statement supporting Harry and Meghan but expressing her regret, has called for final decisions on the complicated arrangements to be made in the coming days.

Meghan has been staying in Canada with baby Archie, where she has carried out visits to charities in Vancouver including to Justice For Girls, which campaigns for an end to violence, poverty and racism for teenagers.

The schoolchildren have been Westminster champions in tag rugby, a non-contact form of the game, for the last three years.

Mr Simpson made Harry laugh when he said: ‘We started without you.’

The global tournament being staged by the UK is the pinnacle event for rugby league and will take place during October and November in 17 cities across England.