The Duke of Sussex today praised the Walking With The Wounded charity in an Instagram post, two days after giving up his military titles and patronages.

Prince Harry marked the organisation’s tenth birthday as he prepared to jet off to Canada to join his wife Meghan Markle and eight-month-old son Archie.

The Duke has supported the charity by going on an expedition to the North Pole in 2011 and trekking across the South Pole with 12 injured servicemen in 2013. 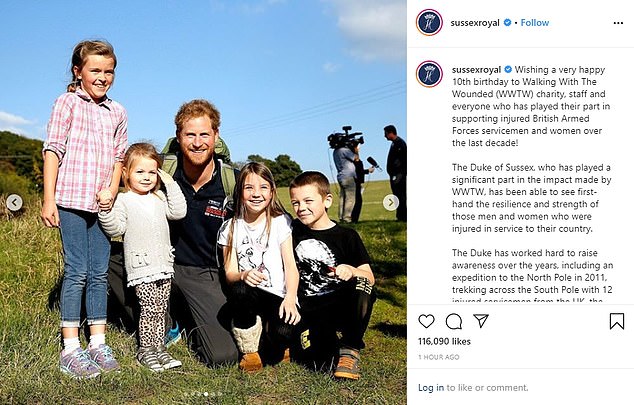 Harry, who announced on January 8 that he is stepping down as a senior royal, also joined wounded veterans for a 1,000-mile walk of Britain in 2015.

In the SussexRoyal post this morning, Harry shared a series of photographs of him supporting the charity for injured British Armed Forces servicemen and women.

It emerged on Saturday that Harry is being stripped of a number of military roles including Captain General of the Royal Marines, the ceremonial head of the Corps. 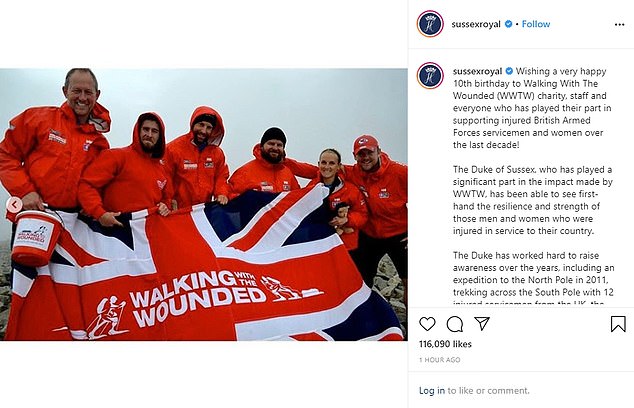 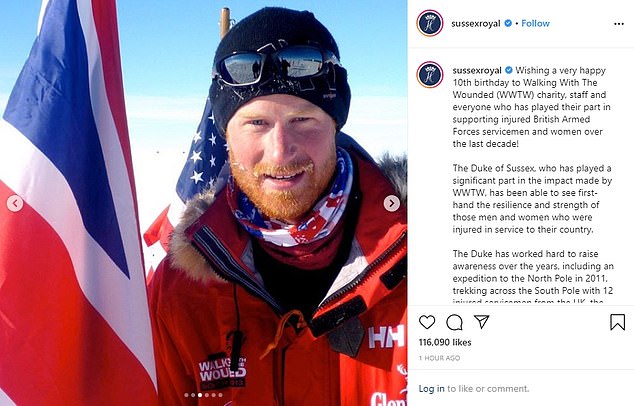 From this spring, he will stop using HRH, spend most of his time living in Canada and pay back the taxpayers’ millions spent renovating his Frogmore home with Meghan.

Today’s post said: ‘Wishing a very happy 10th birthday to Walking With The Wounded (WWTW) charity, staff and everyone who has played their part in supporting injured British Armed Forces servicemen and women over the last decade!

‘The Duke of Sussex, who has played a significant part in the impact made by WWTW, has been able to see first-hand the resilience and strength of those men and women who were injured in service to their country.

‘The Duke has worked hard to raise awareness over the years, including an expedition to the North Pole in 2011, trekking across the South Pole with 12 injured servicemen from the UK, the US and the Commonwealth in 2013, and joining wounded veterans for their incredible 1,000-mile walk of Britain in 2015! 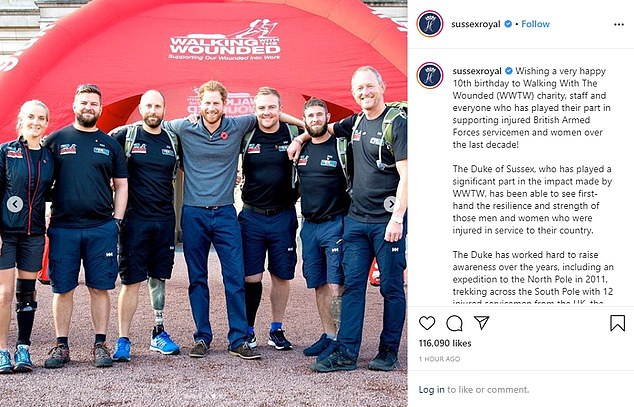 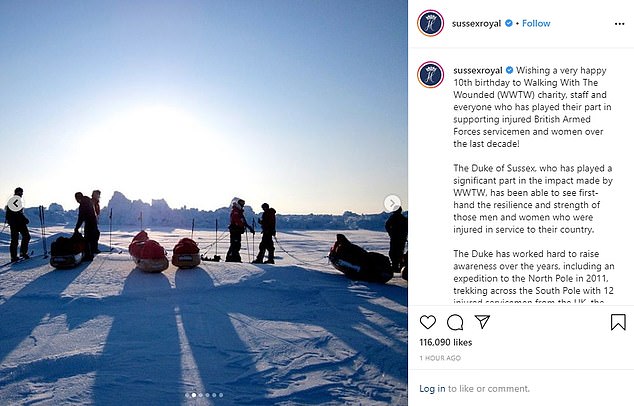 ‘Established in 2010, @SupportTheWalk has created pathways for vulnerable veterans to re-integrate back into society and keep their independence – focusing on those facing the toughest challenges since leaving the military.

‘Offering assistance through programmes to those who have been physically, mentally or socially disadvantaged by their service and assist them through new sustainable careers.

‘The outcome of the remarkable work over the past 10 years? Sustainable employment, and independence for thousands of veterans and their families.’

Last night, the Duke has said he is ‘taking a leap of faith’ in stepping back from his life as a member of the royal family, but ‘there really was no other option’.

Harry gave an emotional speech at Ivy Chelsea Garden in London, where he told the ‘truth’ about leaving royal duties behind in a bid for a ‘more peaceful life’ for his family.

Today, Harry was spotted arriving at the UK-Africa Investment Summit in London, where he held a number of private meetings – including with Prime Minister Boris Johnson.

Earning money while being a member of the royal family appears to have been the crux of the discussions Harry held with the Queen, Prince of Wales and Duke of Cambridge about the future role of he and his wife.

After training at Sandhurst, Harry was commissioned as an officer in the Household Cavalry’s Blues and Royals in April 2006.

During his ten years in the Army, he undertook two operational tours of Afghanistan and qualified as an Apache helicopter commander.

His second tour of Helmand, in 2012, is believed to be one of the few times in his life that the Prince truly found contentment away from the restrictions and pressures of Royal life.

Known as ‘Captain Wales’ by his comrades, he proudly told one fellow soldier: ‘I’ve got the best of both worlds. I get to do all this. I can fly helicopters. I can shine a spotlight on the work I want to do.’

It was the Army which offered Harry his first taste of life away from being a royal.

Harry’s military career ended in June 2015 but he has remained a passionate supporter of the Armed Forces and was handed a number of ceremonial military titles.

He said at the time: ‘Luckily for me, I will continue to wear the uniform and mix with fellow servicemen and women for the rest of my life, helping where I can.’

His highest profile military title is as Captain General of the Royal Marines, a role he was handed by the Queen in December 2017, succeeding the Duke of Edinburgh.

As the ceremonial head of the elite unit, Harry is entitled to wear the uniform and insignia equivalent to a Field Marshal.

His two-year association compares with the 64-year term of his grandfather.

Harry will also quit his role as the Commodore- in-Chief Small Ships and Diving in the Royal Navy and as the Honorary Air Commandant at RAF Honington in Suffolk.

Harry’s determination to quit as a senior Royal had already sparked criticism from fellow veterans.

James Glancy, a former captain in the Special Boat Service, last week said that he and military colleagues would not raise a toast to the Duke if he tried to earn money from his Royal position with commercial ventures.

There was nothing in Buckingham Palace’s announcement on Saturday, however, to suggest that Prince Harry give up his private association and support for a string of military charities, including Walking With the Wounded.

Similarly, Harry could continue his involvement with the Invictus Games for injured Armed Forces personnel and veterans.

He said: ‘The whole situation is extremely sad and I think it is unfortunate, after his splendid service in the military, that he will now no longer be involved with the military in the UK.’