A clip of the Duchess of Sussex with a playful dog filter has resurfaced on social media after Prince Harry described seeing her for the first time online.

Writing in his explosive memoir Spare, the Duke of Sussex, 38, recounts coming across a video of Meghan with their mutual friend Violet Von Westenholz and being immediately drawn to her ‘angelic face.’

‘I’d never seen anyone so beautiful,’ he said, saying it felt like a ‘punch in the throat’ because of Meghan’s ‘wild joy’.

After the release of the royal’s book yesterday, a royal fan shared a clip of Meghan and her Suits co-star Sarah Rafferty again using the dog filter ahead of an appearance on the Today Show on July 14 2016, ten days after her second date with Prince Harry, on Twitter.

After the release of Prince Harry’s memoirs, Spare, yesterday, a royal fan shared a clip of Meghan and her Suits co-star Sarah Rafferty donning a dog filter ahead of an appearance on the Today Show on July 14 2016, on Twitter

In the short clip, Meghan and Sarah are with dog ears and noses, with long pink tongues wagging as they smile.

Meghan can be heard saying ‘We’re on the Today Show’ to promote their appearance, where they discussed the upcoming sixth season of their legal drama Suits.

The video, which was shared by a royal fan, is believed to have been taking on July 14 2016, the day the interviewed aired.

At that point, Meghan had met Prince Harry twice, with their second date taking place in London on 4 July. 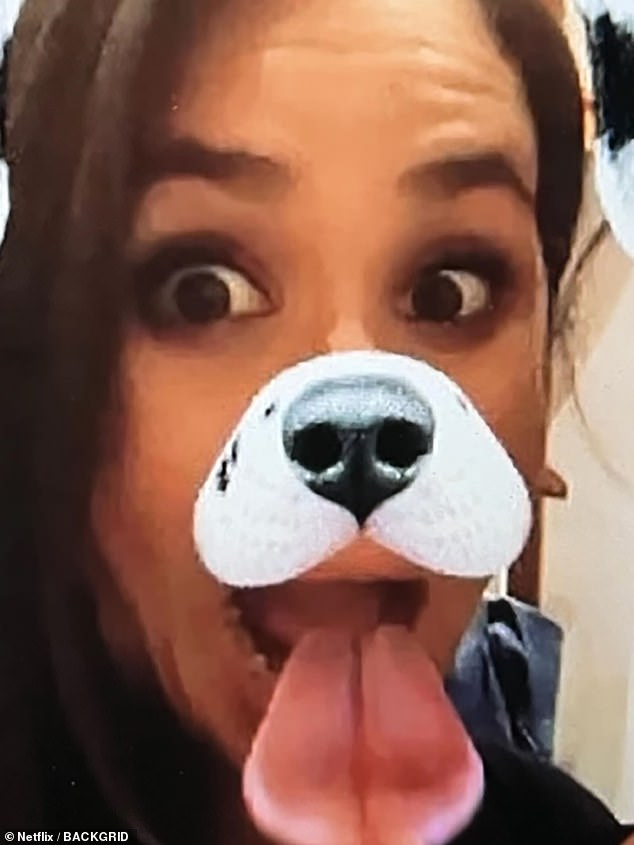 Prince Harry, 38, recounted that he first saw Meghan in a video where she donned the Snapchat with his friend Violet Von Westenholz. Pictured: a similar snap of Meghan 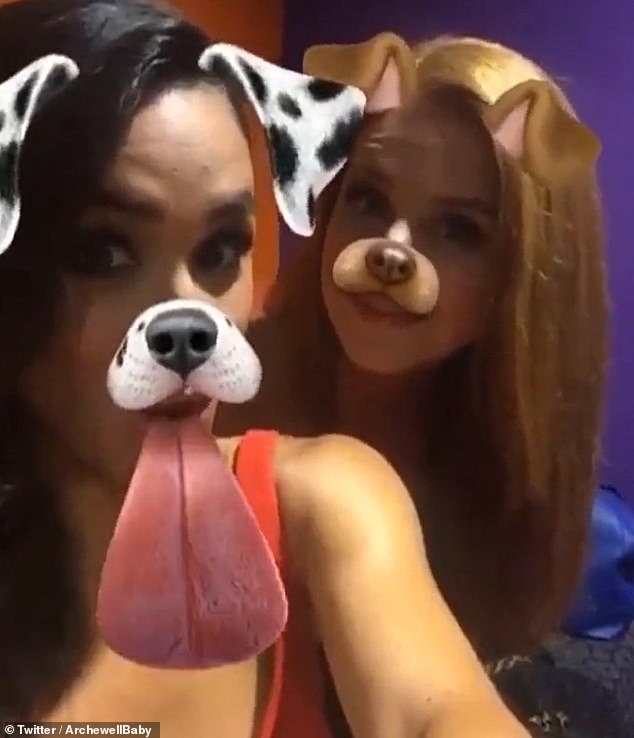 In the short clip, Meghan and Sarah are donning dog ears and noses, with long pink tongues wagging as they smile

The video is very similar to the one Harry came across on his Instagram, and which led he and Meghan to meet.

Prince Harry revealed in the couple’s explosive Netflix docu-series, which was released in December, that Meghan had a dog filter on when he first laid eyes on her.

He also has recounted the moment in his memoirs Spare.

He said his friend Violet Von Westenholz, shared a video of Meghan and her with the canine look on her Instagram, which Prince Harry came across while scrolling on the app.

The Duke of Sussex said the short clip stopped him in his tracks, and he kept returning to it.

‘There was an energy about her, a wild joy and playfulness,’ he said. ‘There was something in the way she smiled, the way she interacted with Violet, the way she gazed into the camera. Confident. Free. She believed life was one grand adventure, I could see that. What a privilege it would be, I thought, to join her on that journey.’ 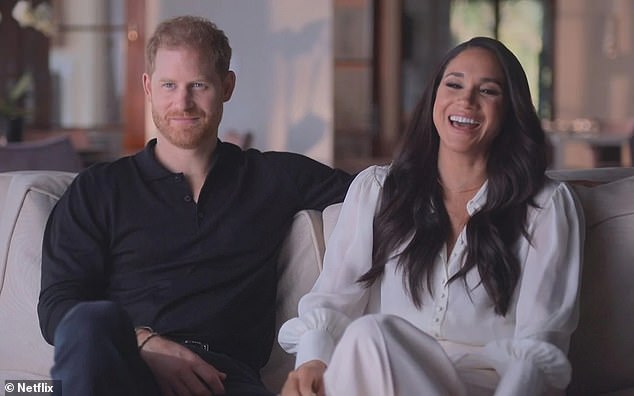 The couple also talked about the dog filter video in their explosive Netflix docu-series Harry and Meghan, pictured, with the Duchess of Sussex, 41, saying the story was ‘ridiculous’

He immediately asked his friend who she was, and asked her to pass Meghan his Instagram handle.

When the Duke of Sussex recounted the moment in the couple’s Netflix documentary, his wife giggled and said it was ‘ridiculous.’

‘Oh gosh, isn’t that whole thing, it’s got like doggy ears,’ a laughing Meghan said, before Harry added: ‘That was the first thing, “I was like who is that?”. His wife continued: ‘That’s ridiculous.’

Harry messaged their common friend and they mentioned it to Meghan, who stalked the Prince’s Instagram feed to see ‘what he was about’.

Viewers questioned the variation, with one person writing on Twitter: ‘Harry and Meghan are remarkably bad at remembering which lies they have told.’

During the segment, Meghan also revealed the email their mutual friend had sent her, which read: ‘Between you and I, thought you might want to know this being newly single and all.

‘I put our Snapchat on Instagram and Prince Haz follows me (he’s a friend) he called me last night dying to meet you. I just might have to set you up,’ the message added.

Meghan admitted she asked to see the royal’s social media feed: ‘So that’s the thing. People say “did you Google him?” “No.”

‘But that’s your homework. You’re like “Hmm let me see what they’re about in their feed, not what someone else says about them but what they are putting out about themselves. That to me was the best barometer,’ she explained.

‘Then we got each other’s numbers. We were just constantly in touch, and I went “let’s meet”,’ Harry added.

A friend of Meghan’s named Silver Tree said that Meghan texted her saying: ‘Silver, you’re not gonna believe this. And basically told me that she was going out on a date with him. We thought it was really funny. Like “In what world does this happen?”.

‘Time fixed my todger, when would it work its magic on my heart?’: The most toe-curling quotes from Prince Harry’s book – from a ‘very saucy’ moment in Waitrose to Meghan singing to seals

Jessica Mulroney stays silent in the wake of Spare: Stylist who was Meghan’s BFF before being embroiled in a race row gets no mention in Harry’s book – despite Duke using publicity blitz to defend Susan Hussey