Prince Harry says his grandmother the Queen asked Meghan Markle about her opinions on Donald Trump during their very first meeting in 2016.

The Duke of Sussex, 38, recalled the first-ever chat between his grandmother and his then-girlfriend in his explosive new memoir Spare, claiming that Her Majesty ‘asked Meg what she thought of’ Trump – who was, at the time, preparing to take part in the 2016 Presidential Election, which he ultimately won.

While members of the British family are typically meant to remain politically neutral in public – and cannot vote in elections in the UK – Harry claims that his grandmother couldn’t help but inquire as to what Meghan really thought about the then-Republican candidate.

However, Harry states that his now-wife, 41, ultimately chose to avoid sharing her opinion, writing that he ‘thought politics a no-win game’ so ‘changed the subject to Canada’, where she was living at the time.

‘It was all very pleasant,’ the Duke said of the exchange, which took place three years before the Queen’s first official meeting with Trump in 2019. ‘Granny even asked Meg what she thought of Donald Trump. (This was just before the November 2016 election, so everyone in the world seemed to be thinking and talking about the Republican candidate.) 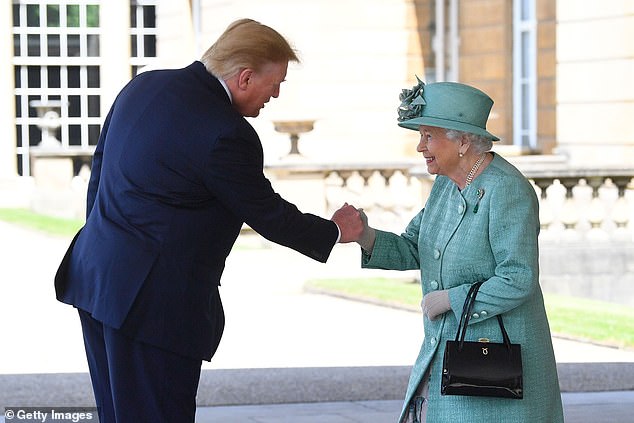 ‘Meg thought politics a no-win game, so she changed the subject to Canada.’

While Meghan may have balked at the thought of sharing her political views with the Queen, in the years since that first meeting, Trump has been incredibly outspoken in his criticism of her and Harry, slamming the Duchess in a November 2021 interview for ‘disrespecting’ the Monarch.

Speaking to British politician Nigel Farage in an on-air interview, Trump admitted that he had never been a ‘fan’ of Meghan, who he believed had used Prince Harry.

He said: ‘I’m not a fan of hers. I wasn’t from day one. I think Harry has been used horribly and I think some day he will regret it. I think Harry’s been used and been used terribly. I think it’s ruined his relationship with his family, and it hurts the Queen.’

He also said that Meghan was ‘very inappropriate’ when asked by Mr Farage about claims she used her royal title to meddle in US politics, by writing on the Sussexes’ headed paper to lobby Congress members on issues such as paternity leave. ‘She is trying to do things that I think are very inappropriate,’ he said.

Harry does not reveal how the then-Suits star pivoted the conversation – however he noted that the Queen was confused when Meghan brought up Canada, and asked: ‘I thought you were American.’

Upon learning that Meghan was indeed American but that she had been living in Toronto for seven years while filming the legal drama Suits, Harry says his grandmother ‘looked pleased’, particularly because Canada is part of the Commonwealth.

The meeting – Harry says – lasted about 20 minutes, before the Queen had to leave, having originally started with the group exchanged pleasantries about Her Majesty’s church service earlier that day and Meghan’s visit to the UK. 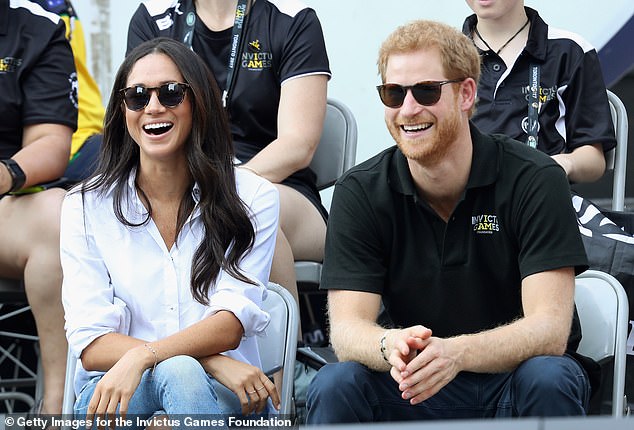 According to Harry, Meghan, now 41, ‘thought politics a no-win game’ so she ‘changed the subject to Canada’, where she was living when she and the Duke began dating – and where they made their first official appearance together in 2017 (pictured)

The Duke says that both his cousin, Princess Eugenie, and her now-husband Jack Brooksbank were present, recalling his annoyance that another man, who turned out to be a friend of Eugenie’s mother Fergie, was also in attendance for ‘one of the most consequential moments of his life’.

Politics has certainly proven to be a no-win topic for the Sussexes since they relocated to the US. The pair have waded into politics on both sides of the Atlantic numerous times since their quit the royal family – who are expected to remain politically neutral in public.

The pair have been met with furious criticism on a number of occasions for weighing in on several hot-button topics, including the right to abortion.

Meghan has never publicly aligned herself with the Democratic party, however her outspoken political views are very much in keeping with those held by the left.

She has previously spoken out to slam the Supreme Court’s decision to reverse Roe v. Wade – and in November 2021 it was revealed that Meghan had been cold calling Republican Senators on their private numbers in order to lobby for paid paternity leave – a move that was met with backlash in the US and the UK.

Then, in June, Meghan once again dived into the political pool when she spoke out against the Roe v. Wade reversal during a conversation with friend and activist Gloria Steinem, 88, and journalist Jessica Yellin for Vogue.

The Duchess of Sussex said all men need to join women in the fight to protect abortion rights, adding that Harry is a feminist, and he reacted with anger to the Supreme Court’s decision.

She said: ‘My husband and I talked about that a lot over the past few days. He’s a feminist too’ and in an intervention that will be widely perceived to be pro-Democrat, she said: ‘We have to channel that fear into action. We can start this November in the midterms. We have to vote, every time’.

She also hinted at the time that she was planning to make a trip to Washington, D.C. in order to join the protests against the Supreme Court ruling – although it is unclear whether she actually made the journey.