Less than a month after quitting the royal family for a more private life in Canada, it has been revealed Prince Harry held talks with Goldman Sachs.

Harry and his wife Meghan are looking ahead to their life outside the royal family during which they’re expected to earn billions of dollars.

However sources insisted the Prince’s talks with the bank were about his charities rather than bolstering the Sussex Royal brand.

Goldman Sachs is one of the world’s best known investment banks, but its conduct has sometimes been called into question in episodes which could clash with Harry and Meghan’s modern ‘woke’ values.

Perhaps most famously the New York based company was accused by the US government and senate of misleading investors about the value of subprime mortgages and contributing to the financial crisis.

Other controversies have ranged from being linked to the 1MDB fraud and a lawsuit brought by former female employees to the bank’s role in the financial crisis.

Prince Harry is said to have spoken with one of the world’s best known investment banks, Goldman Sachs, but its conduct has sometimes been called into question. Right is Fabrice Tourre who was charged with fraud and found liable in a massive mortgages fraud case in 2013

PROFITING FROM THE FINANCIAL CRISIS

Goldman Sachs sold clients billions in sub-prime mortgage products before the financial crisis, according to the Justice Department, while making its own bets on the collapse of the US housing market.

By doing this Goldman Sachs eventually netted massive profits, critics say at the expense of some of its customers and ordinary Americans who lost their homes.

In April 2016 the bank agreed to pay $5.06 billion to the government to settle claims it misled mortgage bond investors during the financial crisis.

At the time, US associate attorney general Stuart Delery said: ‘This resolution holds Goldman Sachs accountable for its serious misconduct in falsely assuring investors that securities it sold were backed by sound mortgages, when it knew that they were full of mortgages that were likely to fail.’

The settlement comprised a $2.385 billion civil penalty and $1.8 billion in other relief, including funds for homeowners whose mortgages exceed the value of their property, as well as distressed borrowers.

Goldman Sachs was also prosecuted for one specific deal during the financial crisis that involved the sale of subprime mortgage products to one client while another profited from the demise of the same product.

The bank was accused in 2010, by the The Securities and Exchange Commission, of committing fraud in a complicated transaction involving securities known as collateralized debt obligations.

It was fined a record $550m for selling its clients a financial product linked to sub-prime mortgages called a CDO that it knew was doomed to fail in 2007.

The deal allowed another of its clients Paulson and Co to make profits of up to $1bn by betting against the CDOs, and cashing in when the value of sub prime mortgages plummeted.

Goldman Sachs collected fees from both trades meaning they couldn’t lose out and shared information about the CDOs with Paulson before they were sold.

The bank’s trader Fabrice Tourre, who was known as Fabulous Fab, was found guilty of six counts of securities fraud for the deals which netted him a $1.7 million bonus in 2007. 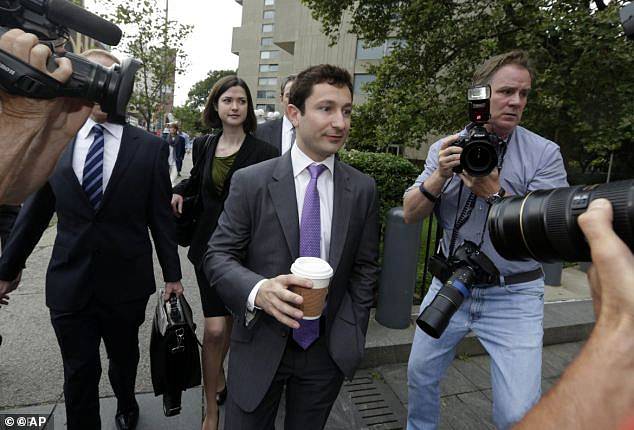 Tourre, a known party lover who grew up in France and moved to the U.S. in 2000 to study at Stanford, insisted at the trial that he never misled anyone.

His attorneys portrayed him as a scapegoat in the economic downturn which they said was caused by larger economic forces.

Speaking with the Wall Street Journal back in 2013, Tourre said that he knew the case would haunt him.

Other controversies to hit the banking firm include an ongoing law suit from 2014 which saw two women accusing their former employers of running a ‘Boys’ Club’.

They claimed women were ‘sexualized or ignored’ and claimed that visits to strip clubs were common.

H Cristina Chen-Oster and Shanna Orlich petitioned a Manhattan federal judge to let them sue on behalf of current and former female associates and vice presidents.

They said in a filing back in 2014 they have statements by former employees, expert statistical analyses and evidence of earnings and promotions from the firm’s records to support their claims.

The women filed a class action suit on behalf of 1,000 former female employees and the legal action is still ongoing.

Ms Chen-Oster and Ms Orlich also sued Goldman back in 2010 for unspecified damages and an order requiring the firm to fix the alleged gender bias.

With the 2014 filing they hope broaden their case to include more than a decade of claimed discrimination at the firm, reported Bloomberg.

Goldman Sachs denied their claims and is fighting the lawsuit. The case is still ongoing.

‘This is a normal and anticipated procedural step for any proposed class action lawsuit and does not change the case’s lack of merit,’ spokesman David Wells said in an e-mailed statement at the time.

While in more recent years – and in a case which is still ongoing – Goldman Sachs was caught up in the scandal surrounding the 1MDB fund.

This was a Malaysian state investment fund from which several billion dollars was stolen.

Financer Jho Low is accused of stealing the money from the Malaysian public and blowing it on luxury properties, artwork and financing Leonardo DiCaprio film The Wolf of Wall Street.

Goldman Sachs helped arrange some of the deals with Low in 2012 and a former senior partner pleaded guilty to money laundering and bribery.

Former Goldman Sachs CEO Lloyd Blankfein met Jho Low at least twice while the bank was doing business with him, according to reports.

London-based vice president Bryan Cohen pleaded guilty in January this year to providing tips to an international trading ring that generated tens of millions of dollars in profits.

While in 2010 former Goldman Sachs employee Rajat Gupta was convicted of insider trading by proving a tips to an associate that led to profits of more than $23million.

Goldman Sachs was also embroiled in claims of stock price manipulation and in 2003 settled a lawsuit that alleged it artificially inflated the share price of RSL Communicatons.

Prince Harry is said to have spoken with the banking giant in November – when he and wife Meghan were holed up in a Vancouver mansion with Archie and decided they would be quitting as senior royals.

Stars are not paid a fee for a Talks at Goldman Sachs appearance – but sources have told the Daily Mirror that it will ‘pave the way for the Sussexes to forge a lucrative future relationship’ with the bank.

Renowned PR agent Mark Borkowski said courting big banks will bring huge riches to the couple in the US, adding: ‘They’re going to earn fortunes, whether through speeches or ambassador work – these are £1billion handshakes’.

Harry and Meghan’s team at Kensington Palace declined to comment – but a royal insider said it ‘categorically untrue’, adding: ‘It was one of The Duke’s charitable patronages that was in discussion with Goldman Sachs’.