Prince William is to give his first speech in his new role as the Prince of Wales today, delivering a keynote address at the United for Wildlife Global Summit in London.

The 40-year-old royal, a passionate environmentalist, arrived at the Science Museum in South Kensington ahead of delivering his speech on illegal wildlife crime to hundreds of delegates gathered from around the globe.

The summit, hosted by Lord Hague, Chair of The Royal Foundation of the Prince and Princess of Wales, saw a relaxed-looking William arrive at the London tourist attraction wearing a sharp, navy suit teamed with a claret-hued tie.

It’s thought the Prince, who was not joined by the Princess of Wales, will pay tribute to those ‘on the frontline’ against commercial poachers, particularly wildlife rangers, in his first public address since the Queen’s death on September 8th.

The Prince of Wales, delivering his first speech since his new role as next in line to the throne was announced after the Queen’s death on September 8th, attended the United for Wildlife (UfW) Global Summit at London’s Science Museum on Tuesday 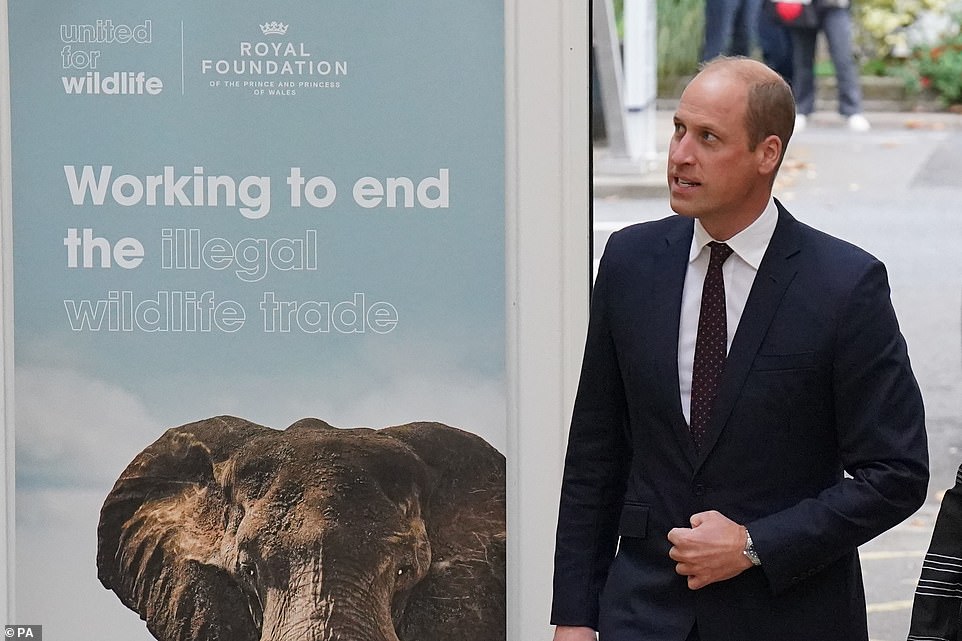 Keen environmentalist William, 40, will deliver a keynote speech on highlighting illegal wildlife crime and its damaging impact on global biodiversity and local communities 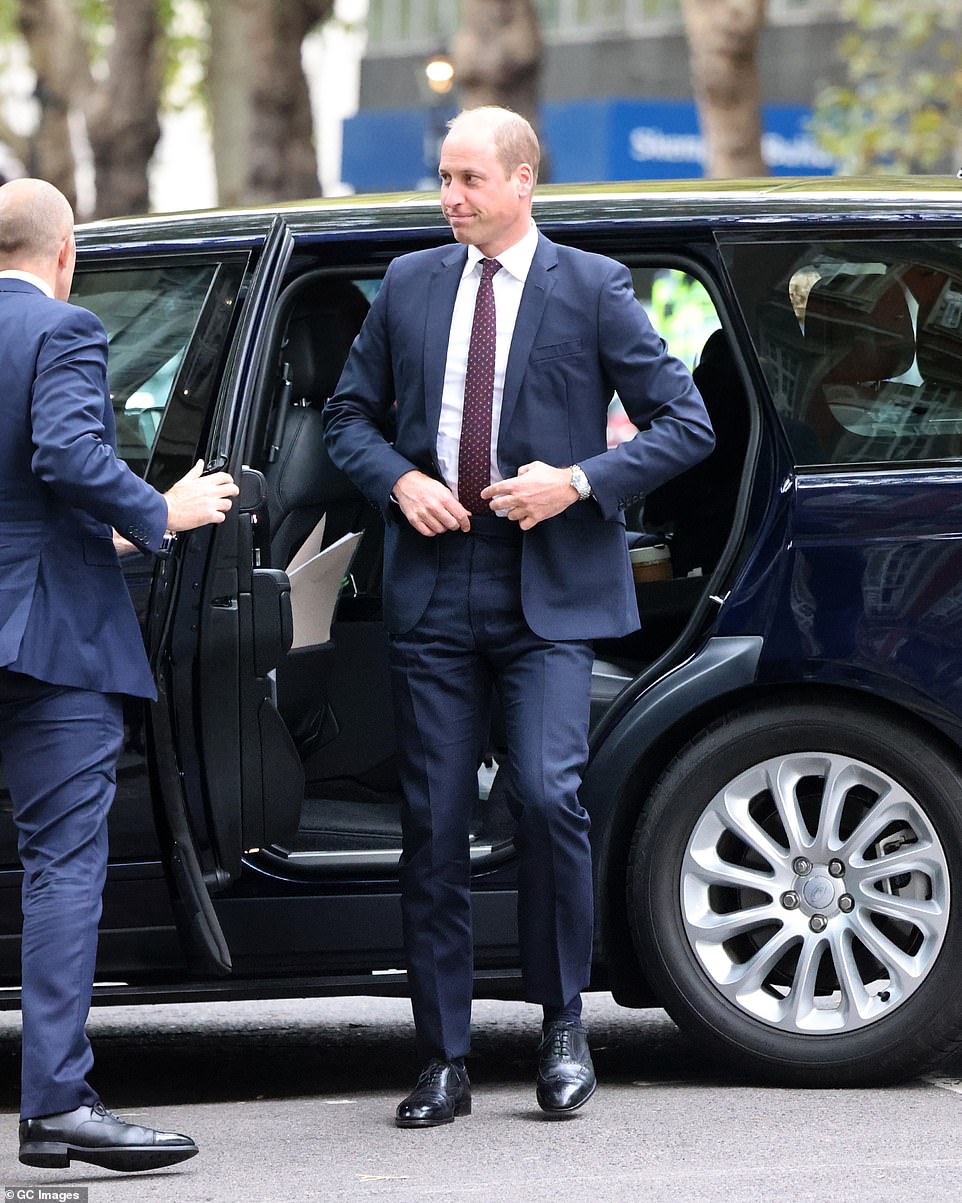 The Prince offers a smile to well-wishers gathered at the London tourist attraction, as he adjusts his suit after exiting the royal car 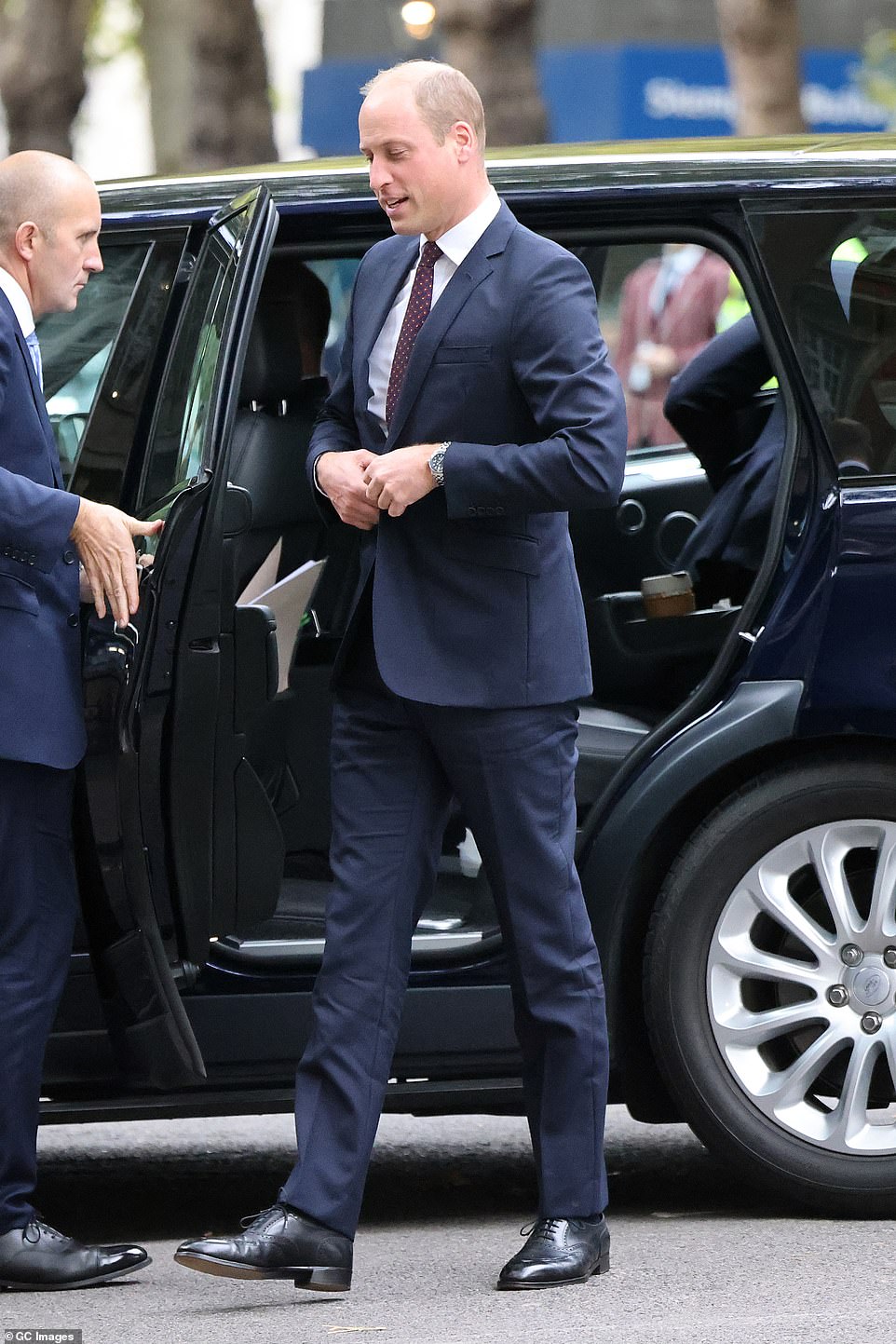 A royal aide opens the door for Prince William, who was not joined by the Princess of Wales, as he is greeted at the Science Museum 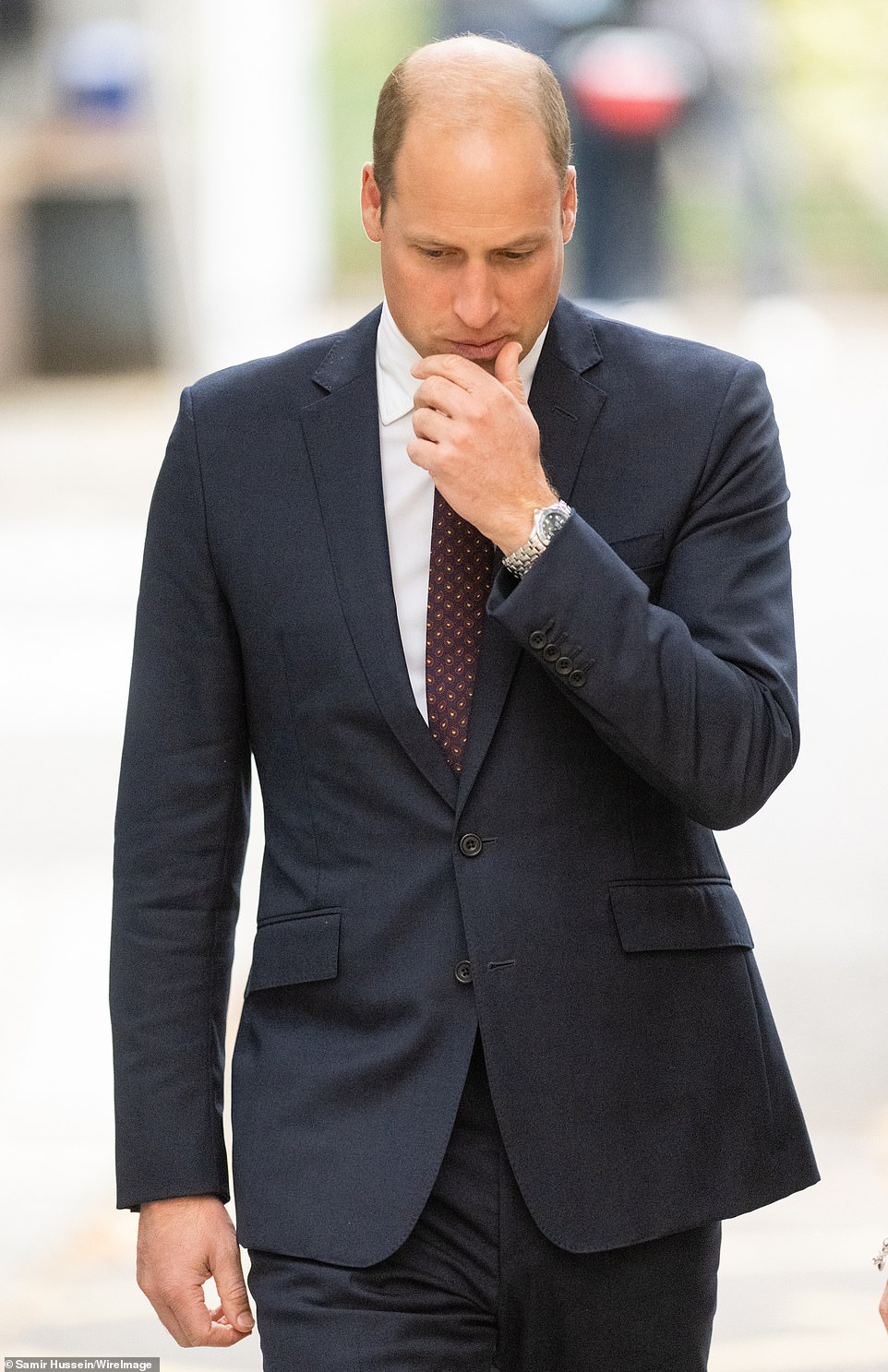 Thoutful: But the Prince looked confident ahead of his first public address, at a conference he called ‘vital’ on Twitter

In a tweet ahead of the conference, The Prince and Princess of Wales called the summit ‘vital’.

Created in 2014, United for Wildlife was founded by the Royal Foundation, a joint venture between the Prince and Princess of Wales and Prince Harry.

The illegal wildlife trade is thought to be worth up to $20 billion per year, and is linked to violent crime, corruption and other forms of trafficking.

In the six years since United for Wildlife created its international transport and financial taskforces, it has been involved in 450 law enforcement cases, over 250 arrests, almost 200 seizures of wildlife products. 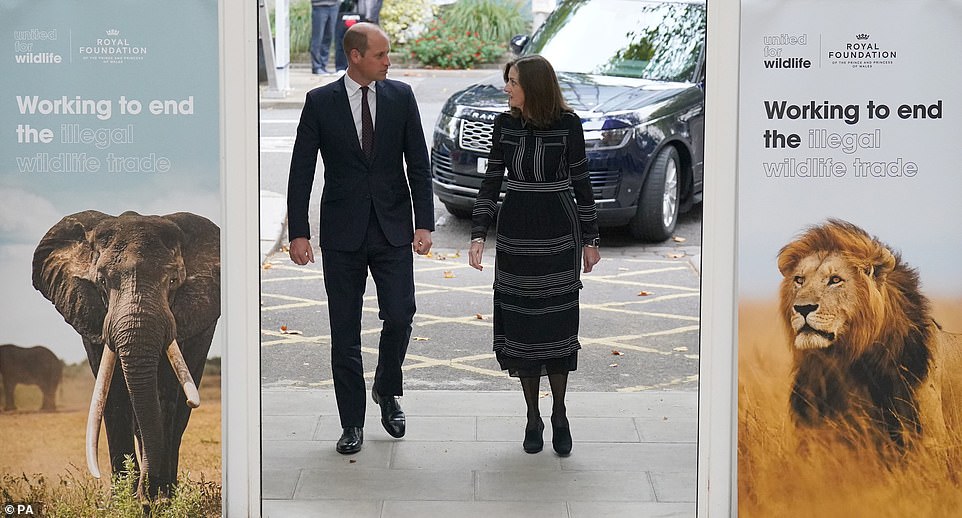 Wearing a navy suit teamed with a claret-hued tie, the Prince attended the official engagement without the Princess of Wales (The Prince of Wales arrives at the United for Wildlife (UfW) Global Summit at the Science Museum in London on Tuesday) 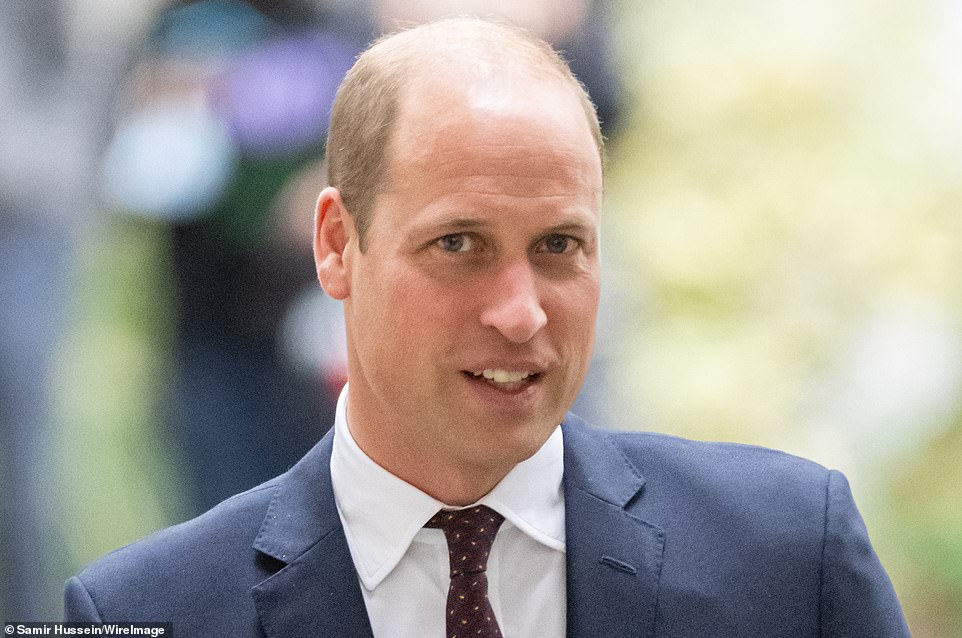 The subject of commercial poaching and the illegal wildlife trade has been close to William’s heart for many years; the Prince of Wales created the United For Wildlife charity in 2014 with The Royal Foundation 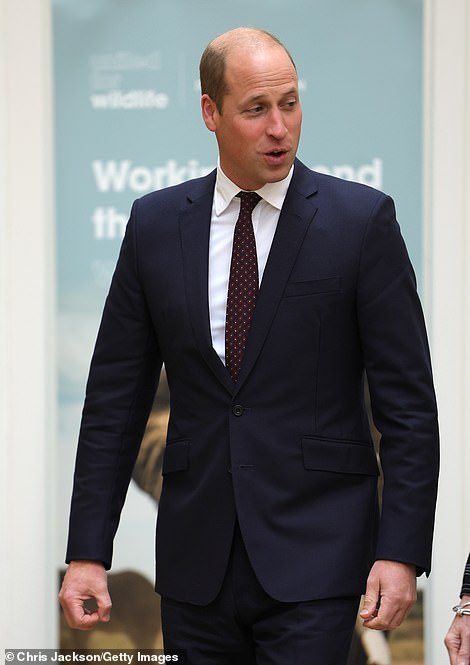 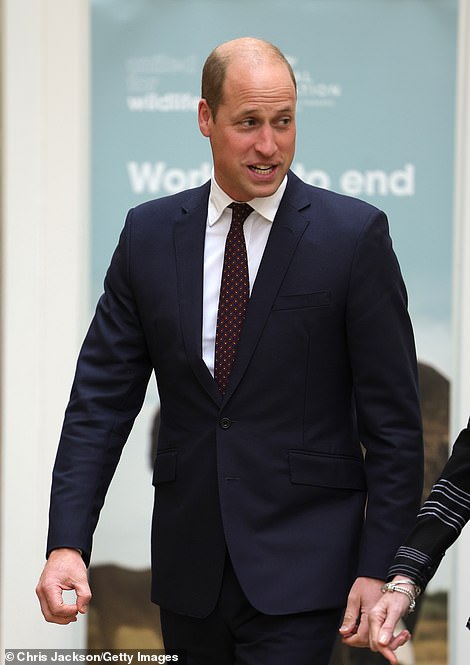 The heir to the throne looked in good spirits as he arrived in London from his Windsor home to attend the one-day summit. Pictured: William is greeted at the entrance of the Science Museum in South Kensington

Prince William has long since been committed to supporting climate change causes, launching the Earthshot prize two years ago with Sir David Attenborough.

The late Duke of Edinburgh, who died in April 2021, was a committed campaigner for the environment and was a knowledgeable naturalist and was president of the World Wildlife Fund charity.

Her Majesty the Queen was also similarly passionate about wildlife and the environment and was the patron of numerous trusts and charities. 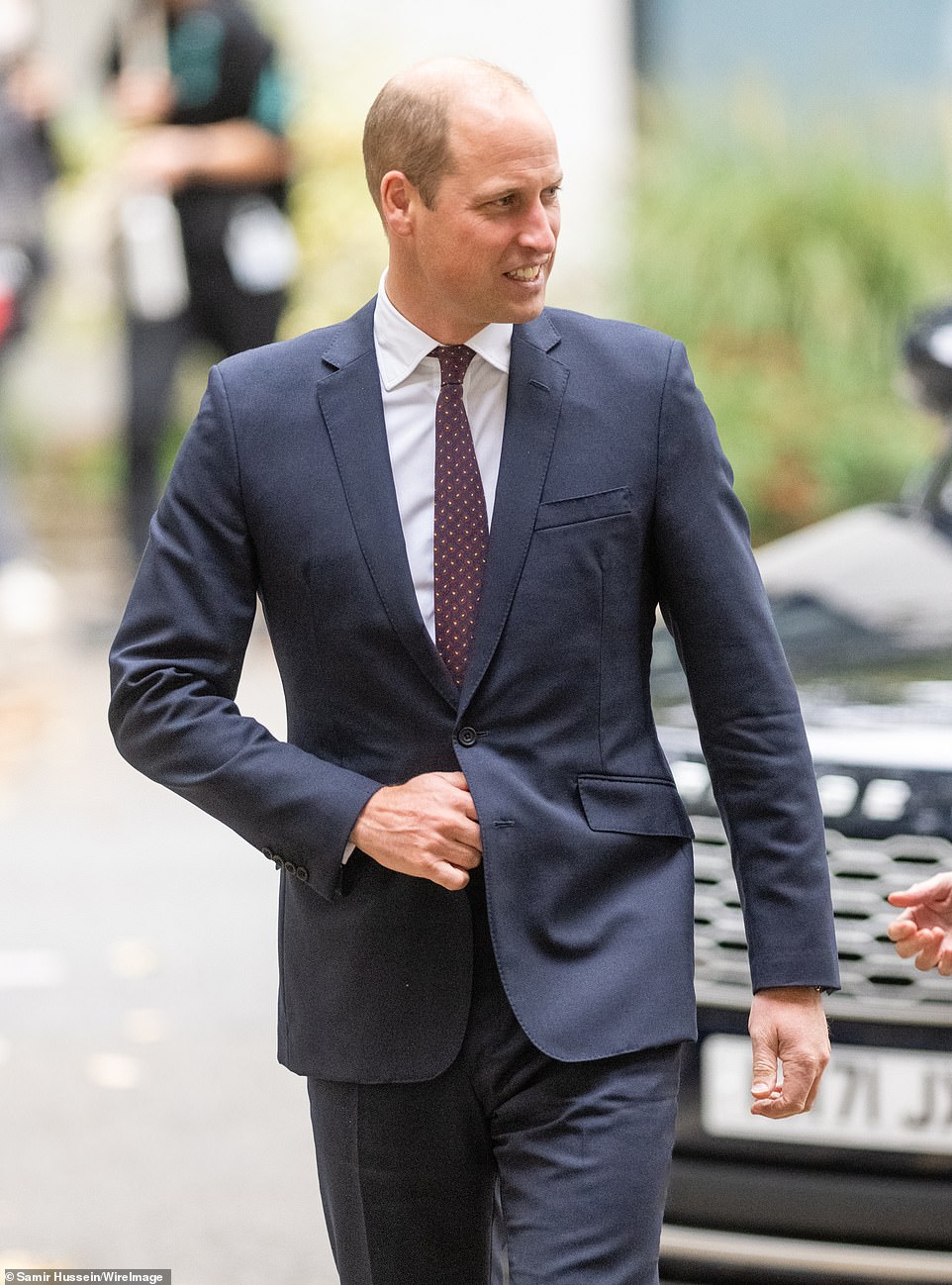 The next in line to the throne buttons a jacket on his suit as he makes his way into the summit, where he will address 300 delegates gathered from around the globe 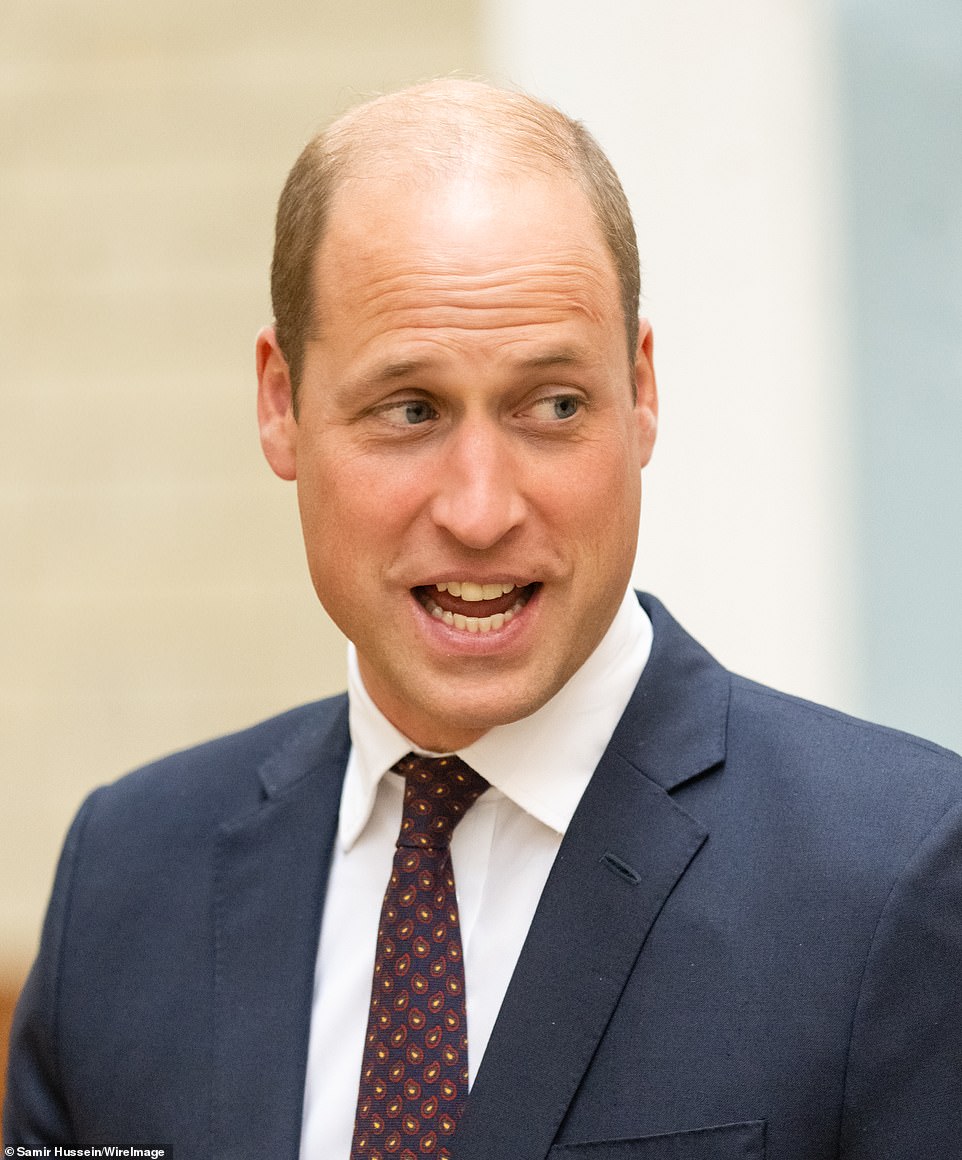 The Prince of Wales will not attend Cop27, despite his appearance at Cop26 in Glasgow in October last year

Neither King Charles nor Prince William will attend the Cop27 climate summit after reportedly being advised to stay away by Liz Truss.

The monarch was thought to be planning to make a speech at the meeting of world leaders in Sharm El Sheikh, Egypt, in November.

But the Prime Minister, who will also not attend, objected to his plans during an audience at Buckingham Palace last month.

And in another surprise, it has emerged that the Prince of Wales, who like his father is also an outspoken environmental campaigner, will not attend the summit – instead focusing on his Earthshot Prize.

By contrast, the royal family gathered at Cop26 in Glasgow, with the late Queen giving a heartfelt message about saving the planet. 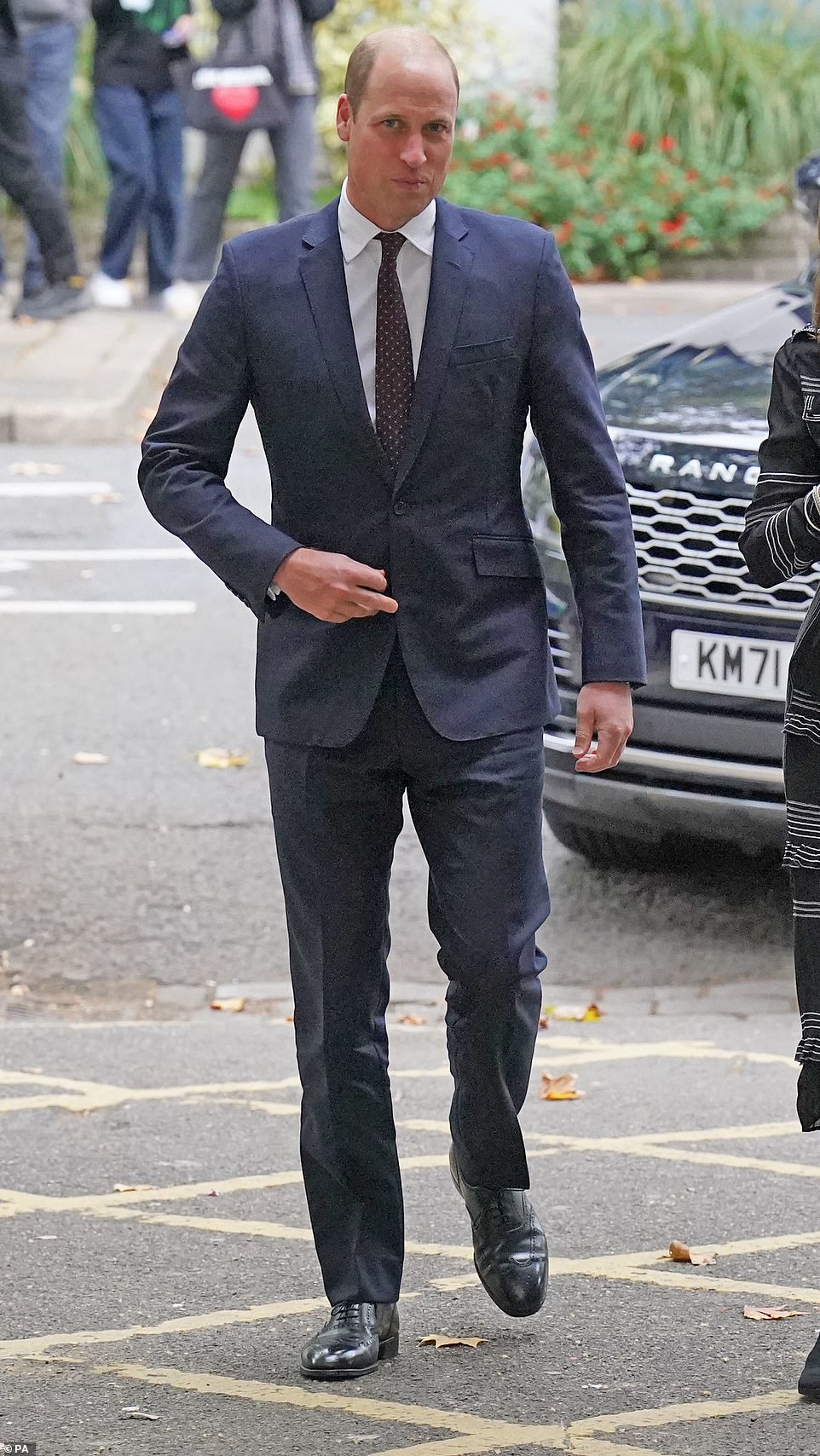 Travelling solo, the Prince looked relaxed as he arrived at the South London museum at lunchtime on Tuesday 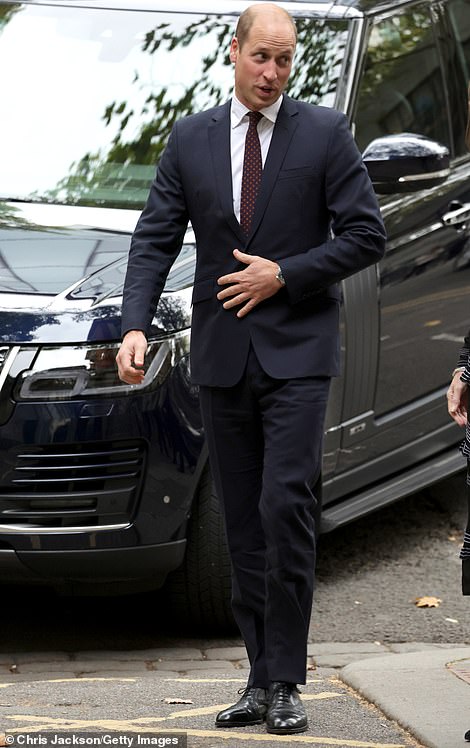 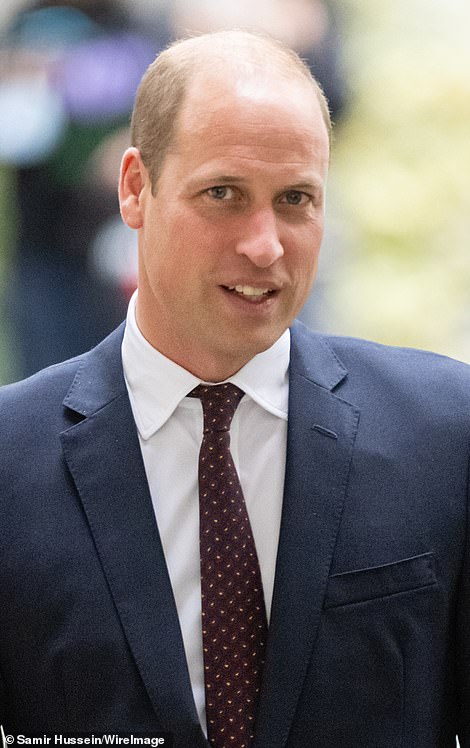 The Prince travelled to the summit for the charity he founded eight years ago in a Range Rover. Today marks the first official solo engagement for the Prince since the official period of private mourning for the Queen ended 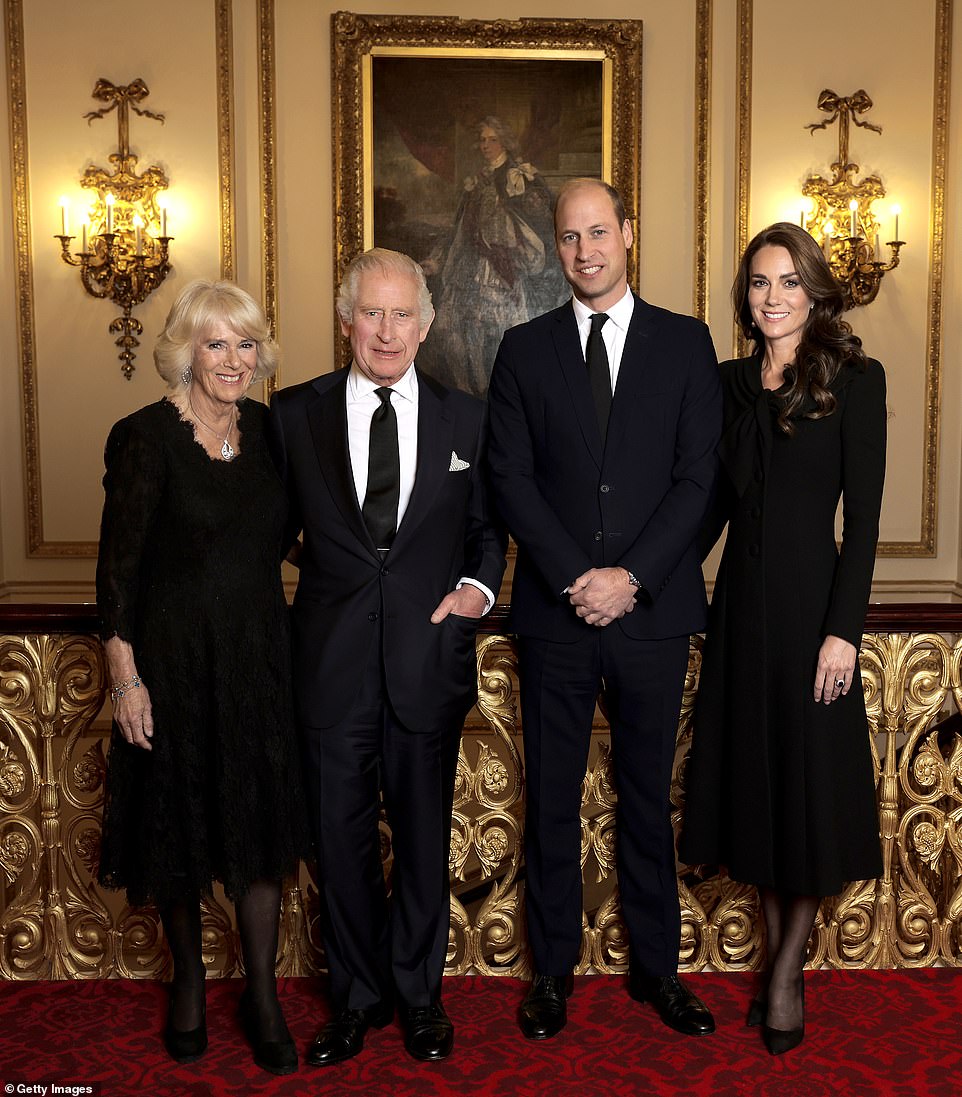 Neither King Charles nor Prince William will attend the Cop27 climate summit after reportedly being advised to stay away by Liz Truss. (Pictured: Camilla, Queen Consort, King Charles III, Prince William, Prince of Wales and Catherine, Princess of Wales in a recent photograph

It comes amid growing suspicion that the Government is planning to water down or even abandon its target of ‘net zero’ carbon emissions by 2050.

The Palace said advice had been sought by the King and was given by Miss Truss. ‘With mutual friendship and respect there was agreement that the King would not attend,’ the Palace said.

But the decision is likely to have disappointed the King, who as Prince of Wales had a long history of campaigning to reduce the effects of climate change. As heir to the throne he also had a reputation for interfering in government business, most recently expressing his distaste for the Government’s plan to send illegal immigrants to Rwanda.

After the death of his mother, friends insisted he will not cool on the issue of global warming. 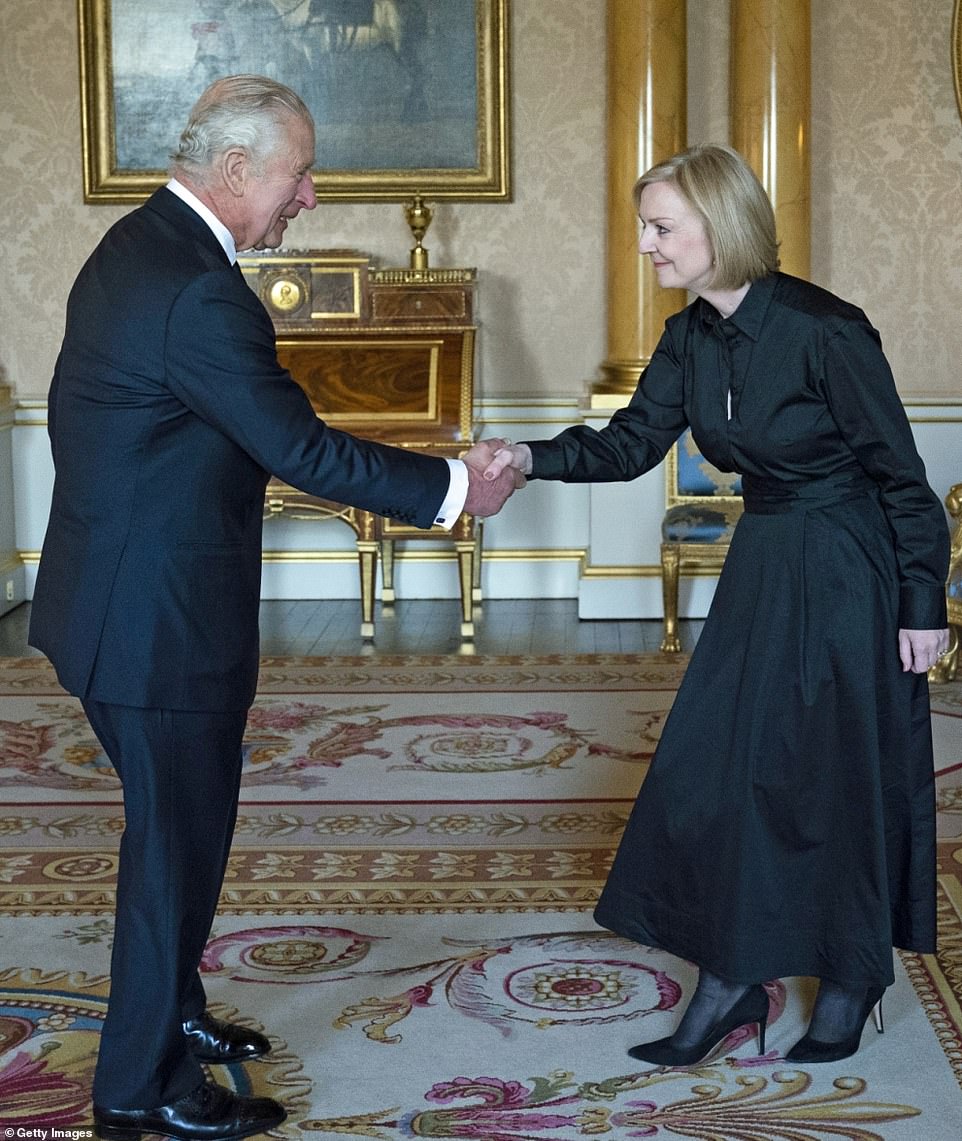 Vetoed? It was speculated that the King had plans to make a speech at the upcoming Cop27 conference that would clash with the new government’s watered down climate change policies, with Buckingham Palace confirming the King would not travel to Egypt for the summit next month

But as monarch he is obliged to remain politically neutral, and in his address to the nation after the Queen’s death, he acknowledged that ‘it will no longer be possible to give so much time to the… issues for which I care so deeply’.

Before his ascension to the throne last month, King Charles had indicated he would attend the 27th UN Climate Change Conference, known as Cop27, which will run from November 6 to 18.

A source told the Daily Mail there had never been any firm plans for the King to go, though he has attended previously, leading to speculation he would again this year. As all foreign visits are undertaken at the request of the British Government, advice was sought by the Palace.

The ‘unanimous’ decision, it has been suggested, is that with so many demands for the King to be deployed abroad, Cop27 would not be the ‘right occasion’ for his first overseas visit as sovereign.

Sources highlighted his address to the nation following his mother’s death, in which he stressed that he remains ‘ever mindful’ of his constitutional role in light of his change of circumstances.

As previously highlighted by the Mail, it is understood that the environment will remain central to his work as sovereign.

In 2015, he delivered the opening address at Cop21 in Paris, describing climate change as the greatest threat facing humanity.

In a hard-hitting speech the King echoed Winston Churchill by calling on ‘the few’ to take action to save the planet, urging world leaders to commit ‘trillions, not billions, of dollars’.

He also delivered a speech at the opening ceremony of Cop26 in Glasgow last year, calling on world leaders to adopt a ‘warlike footing’ to deal with climate change. Although he will not attend Cop27 in person, it is understood he is still determined to make his presence felt, leaving the door open for a virtual appearance.

Conservative MP Tobias Ellwood said in a tweet that he hoped the King would be allowed to go to Egypt, adding that he was a ‘globally respected voice’ on the environment whose attendance would add ‘serious authority’ to the British delegation.

While Boris Johnson became an enthusiastic advocate for net zero, Miss Truss is thought to be more sceptical of the green agenda.

A government source said: ‘The Palace and the Government considered separately, and then agreed jointly, that… he is not going to be attending Cop.’