Prince Philip missed the Cenotaph service for the first time in 20 years, as the Queen was joined by Kate and Camilla to pay tribute to the country’s war dead on Remembrance Sunday.

The Queen viewed the service from a nearby balcony, although the Duke of Edinburgh was absent – one of the few times he has missed the occasion.

The 97-year-old officially retired from royal duties in May 2017 but he did attend last year’s service in Whitehall.

The Duke of Edinburgh and the Queen watching the Cenotaph in November 2017. Prince Philip missed the Cenotaph service this year for the first time in 20 years 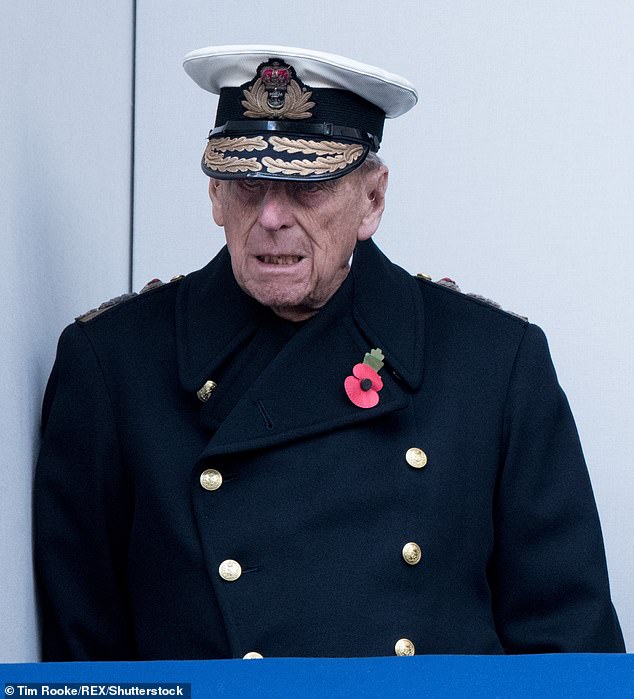 Prince Philip appeared frail as he watched the ceremony from the Foreign and Commonwealth Office balcony, whose wreath was laid by his Equerry

However the Duke of Edinburgh was seen yesterday, on the eve of the armistice, riding his carriage on the grounds of Windsor Castle.

He set off for his customary morning carriage ride despite the cold and rainy weather in Berkshire.

Last year the Queen observed the service from the Foreign and Commonwealth Office balcony alongside her husband Philip, whose wreath was laid by his Equerry. 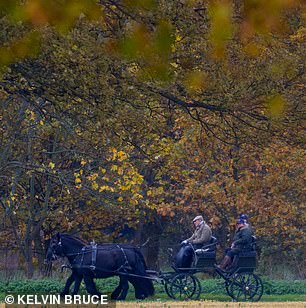 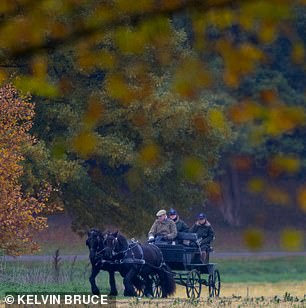 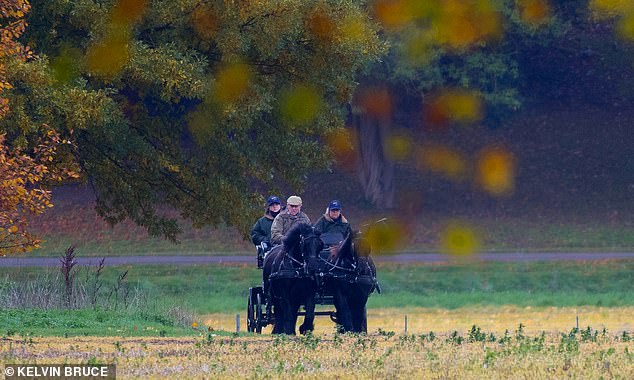 The Duke of Edinburgh was seen yesterday, on the eve of the armistice, riding on his carriage on the grounds of Windsor Castle

Prince Philip appeared frail and had trouble standing as he watched the ceremony for the first year since he retired.

The Queen, 92, asked Prince Charles to once again take on her duties this year as she observed the service alongside the Duchess of Cambridge and the Duchess of Cornwall.

At this year’s Cenotaph, the Prince of Wales led the Royal Family’s tributes to the nation’s war dead this year on the centenary of the Armistice.

The event marks 100 years since the signing of the treaty which ended the battle on the Western Front of the First World War at the 11th hour of the 11th day of the 11th month of 1918. 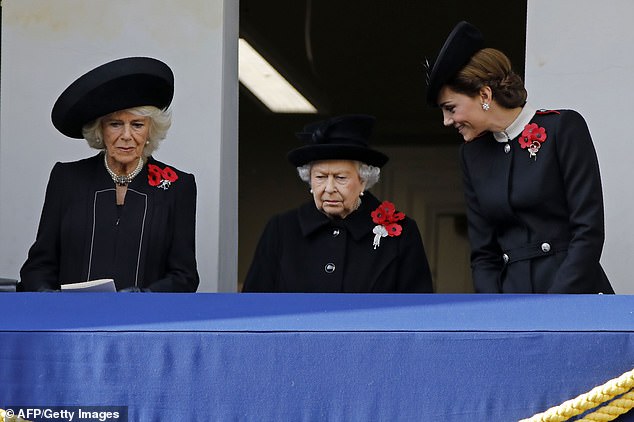 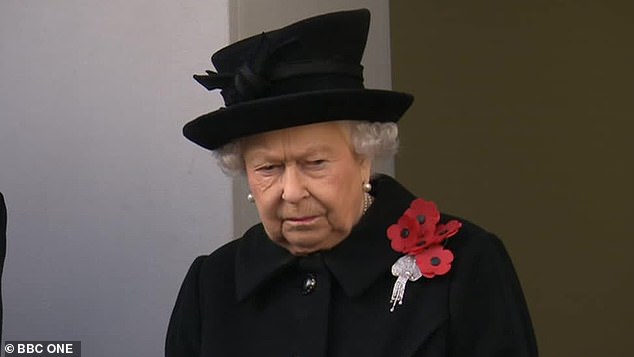 The Queen, 92, asked Prince Charles to once again take on her duties as she observed the service from a nearby balcony alongside other senior members of the royal family

The President of Germany, Frank-Walter Steinmeier, also laid a wreath on behalf of the German people.

It is the first time since the Cenotaph was inaugurated in 1920 that a representative of the country has taken part in the UK’s national service of remembrance. 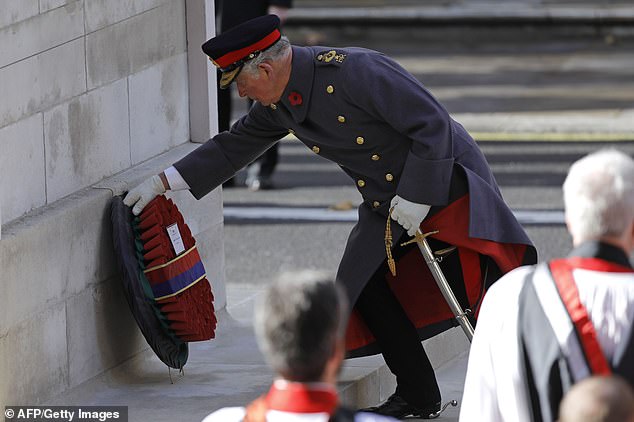 The Prince of Wales led the rest of the nation in honouring the country’s war dead on Remembrance Sunday, taking the role historically held by his mother Queen Elizabeth for the second year in a row 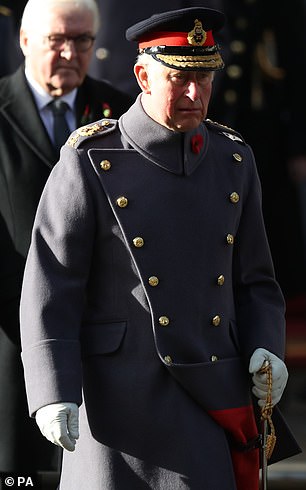 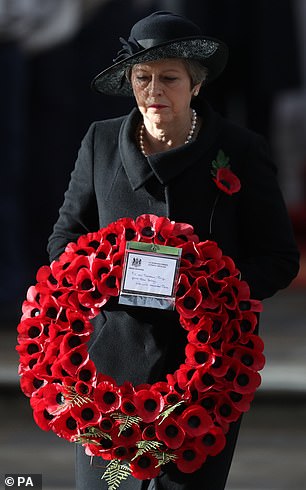 President Steinmeier’s presence was a symbol of the friendship that exists between the two countries today, a representative of the Department for Digital, Culture, Media and Sport said.

Prime Minister Theresa May and Labour leader Jeremy Corbyn also laid wreaths at the foot of the Whitehall memorial, along with Liberal Democrat leader Sir Vince Cable, Foreign Secretary Jeremy Hunt and Speaker of the House of Commons John Bercow.

The traditional two minutes’ silence was held at 11 o’clock and was marked by the chiming of Big Ben – despite the ongoing renovations to the clock tower. 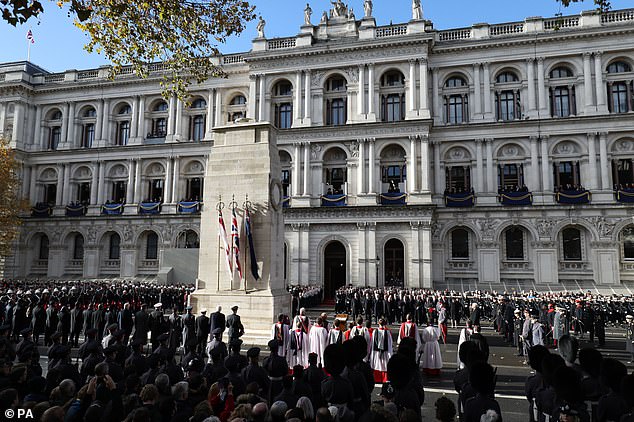 The Prince of Wales has led the Royal Family’s tributes to the nation’s war dead on the centenary of the Armistice, as the Queen looked on from a nearby balcony

The end of the silence was marked by cannon fire and The Last Post sounded by the Buglers of the Royal Marines before the wreaths were laid.

Culture Secretary Jeremy Wright said: ‘On the centenary of the Armistice, we will come together as a nation to stand in silence and honour the fallen of all conflicts.

‘Over the past four years, we have told the story of the First World War and the unique generation who served so bravely and made the ultimate sacrifice for their country.

‘Today, we will also give thanks for all those that returned and the peace they fought so hard for.’

Defence Secretary Gavin Williamson said: ‘To be at the Cenotaph on Remembrance Sunday is a privilege and provides us with the opportunity for reflection along with millions of people in countries that continue to be strong allies.

Prince William, Duke of Cambridge and Prince Harry, Duke of Sussex, attend the Remembrance Sunday ceremony at the Cenotaph

‘We will never forget them or the sacrifice of thousands of British and Commonwealth troops who have given their lives in other conflicts.’

The ceremony will be followed by the annual Royal British Legion’s Veterans Parade. 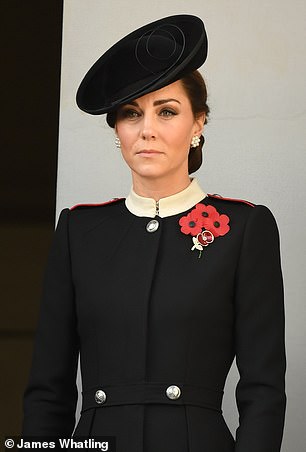 The Duchess of Cambridge (left) and the Duchess of Sussex (right) stood alongside the Queen to watch the ceremony at the Cenotaph, as their husbands placed wreaths

Big Ben will sound again today at 12.30pm, joining bells across the country and the rest of the world – an event to echo the celebrations of November 11, 1918 as news of the Armistice spread.

In the afternoon, 10,000 members of the public – chosen by ballot – will process past the Cenotaph for ‘A Nation’s Thank You – The People’s Procession’.

The day will conclude with a Service of Thanksgiving at Westminster Abbey.