The Queen on a visit to the Royal Philatelic society in London on November 26, 2019

The grieving Queen faces an agonising decision over which members of the Royal Family will be able to attend Prince Philip’s funeral under coronavirus restrictions, as preparations for the Duke’s ceremony and burial begin.

Her Majesty has entered an eight-day period of mourning following the death of Prince Philip today aged 99 – as arrangements for his funeral, codenamed Operation Forth Bridge, have begun.

The Duke of Edinburgh drew up the plans himself and in character with his no-nonsense attitude will eschew usual state formalities.

Philip will lie at rest in Windsor Castle for a period of days ahead of his funeral at St George’s Chapel, which is expected to be socially distanced.

Royal fans have been told not to attend any part of the events that make up the funeral die to Covid restrictions, or lay flowers.

The Duke of Edinburgh is expected to then be buried in Frogmore Gardens, in the grounds of Windsor Castle.  Gun salutes in his honour are also expected as part of the days ahead.

But the question of who will be allowed to attend the ceremony for the funeral is made more difficult due to Covid-19 restrictions.

Eight senior royals are said to be within the ‘firm of eight’ chosen to represent the family look certain to be there on the day.

They are William and Kate, Prince Edward, the Countess of Wessex, the Prince of Wales and Camilla, The Queen herself and Princess Anne.

But there are a number of other Royals who would be keen to pay their respects including Prince Andrew, Prince Harry, his wife the Duchess of Sussex, The Duchess of York, as well as Princesses Eugenie and Beatrice. Then there are a myriad of further family and friends who want to attend.

During the eight days of mourning The Queen will not carry out any duties even in private under Covid restrictions, laws will not be given the Royal Assent and affairs of state will also be paused.

Following these eight days, a further period of official Royal Mourning is expected to continue for 30 days.

Scores of people will be involved in the days ahead, from military guards and the clergy, to staff at Buckingham Palace and Windsor Castle, who will be making sure the household continues to run smoothly during this traumatic time for the Queen.

The Queen and her children and grandchildren will enter a period of mourning for their patriarch, which could last several weeks.

Official engagements, most of which are presently online, can continue during this time, although most are postponed or cancelled, but it depends on the wishes of the monarch.

In non-pandemic times, social engagements would usually be cancelled, except those for charitable causes.

There are various types of mourning, but Royal – also known as Court – Mourning, includes the royal family, royal households and the Queen’s representatives in the UK and abroad wearing black and also using black-edged writing paper. 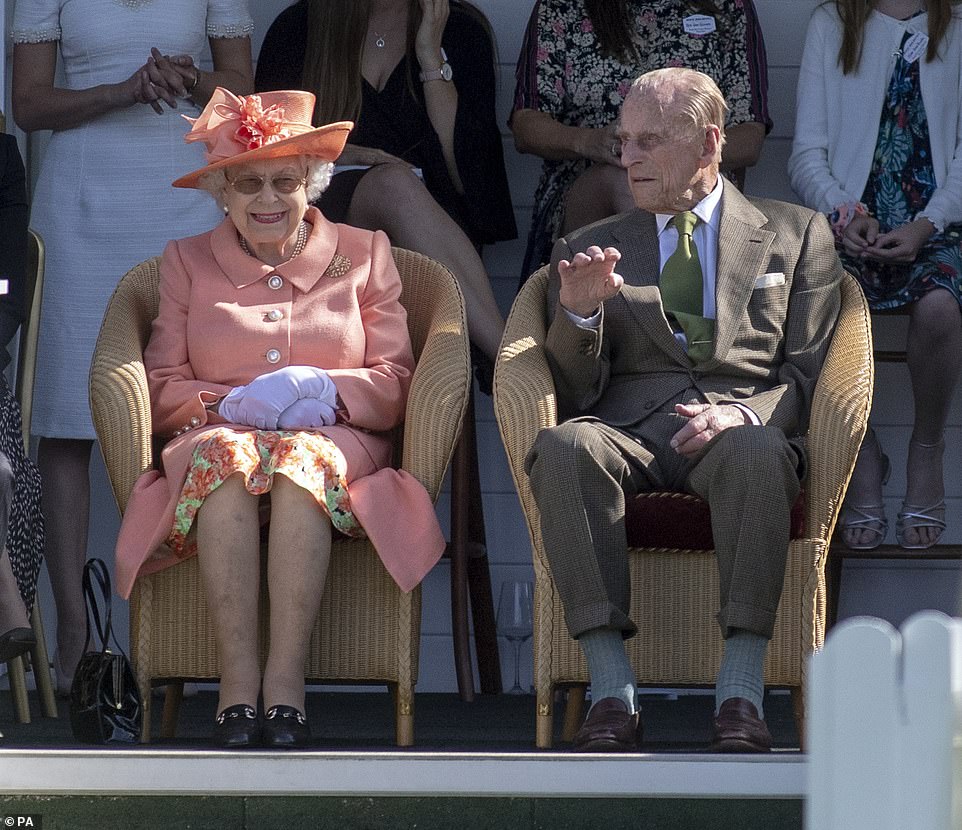 Prince Philip is expected to be buried in Frogmore Gardens in the grounds of Windsor Castle, the site of Queen Victoria and Prince Albert’s mausoleum (pictured) 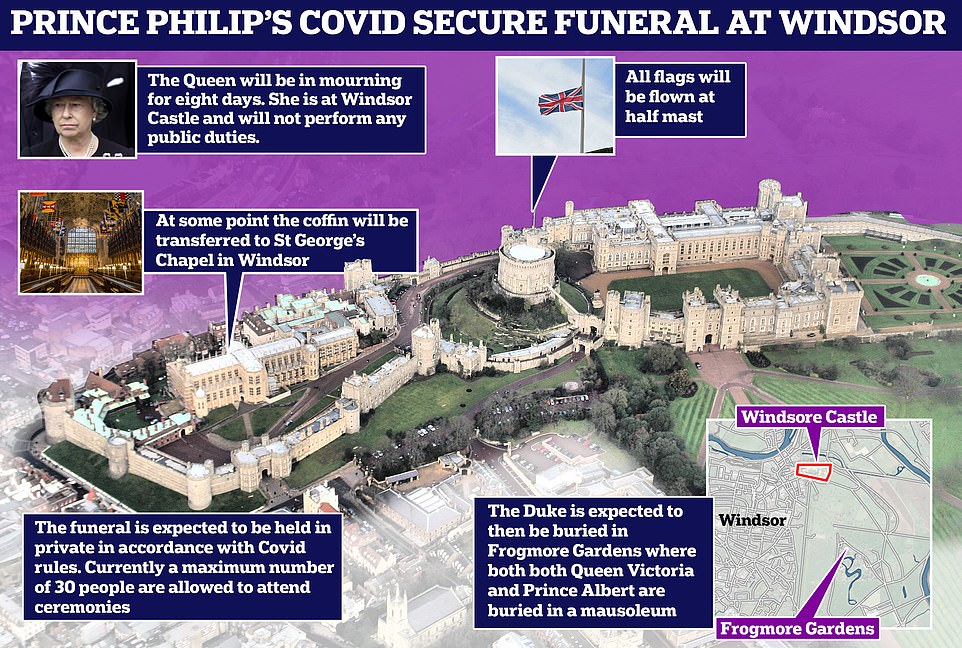 Most of Britain’s monarchs are buried in Westminster Abbey and St George’s Chapel, but both Queen Victoria and Prince Albert are in a mausoleum in Frogmore Gardens.

After her husband’s death, Victoria lived largely in isolation at Balmoral until she died on January 22, 1901. Her 40 years of mourning severely damaged the monarchy.

Following the Duke’s death, Union flags will fly at half-mast around Britain, but Philip will not lie in state and there will be no state funeral.

The Lord Chamberlain, the most senior officer of the royal household, will be in charge of arrangements. 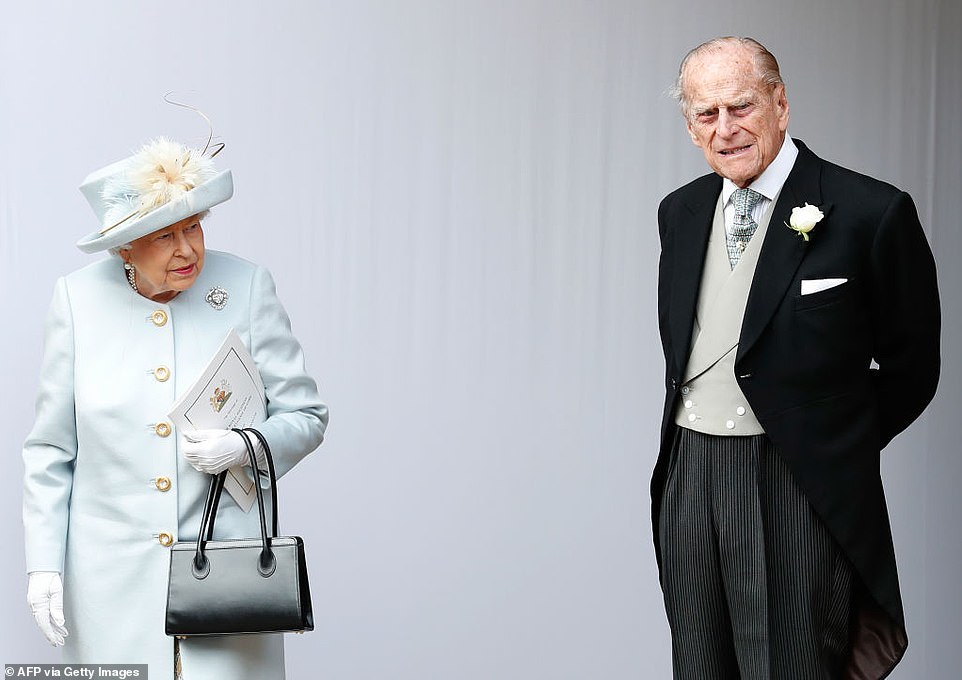 The Queen is also expected to broadcast a televised message to the nation at some stage over the next few days, although this is dependent on how she feels.

In normal times, there would be early morning rehearsals over the next week for a gun carriage and procession through the streets of London, and another in Windsor.

The day before his funeral, the coffin would be moved across the road from Chapel Royal to the Queen’s Chapel to allow an easier transfer to the gun carriage.

The funeral itself would be held in Windsor, while a military procession would take place from St James’s Palace, down Marlborough Road and up The Mall. 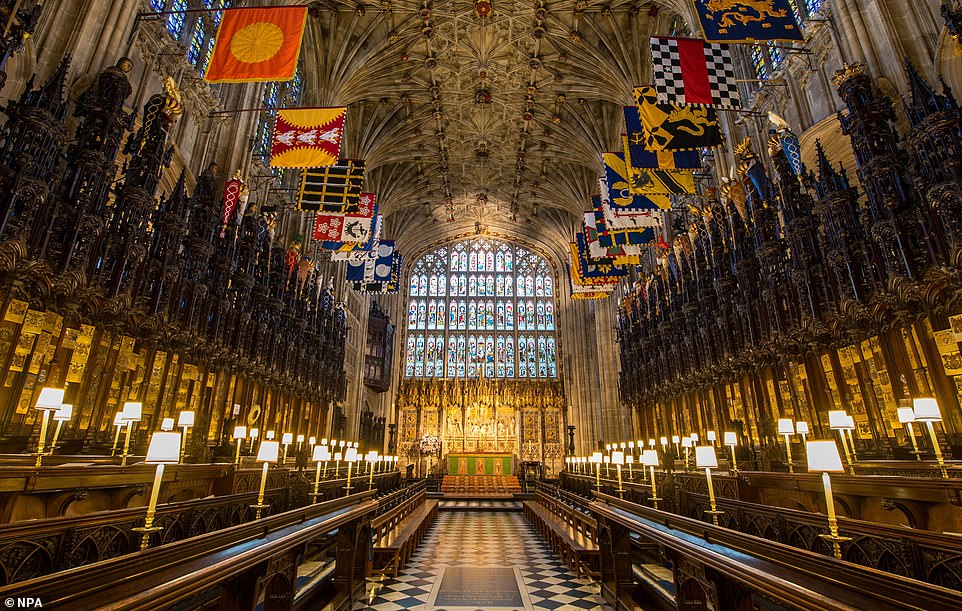 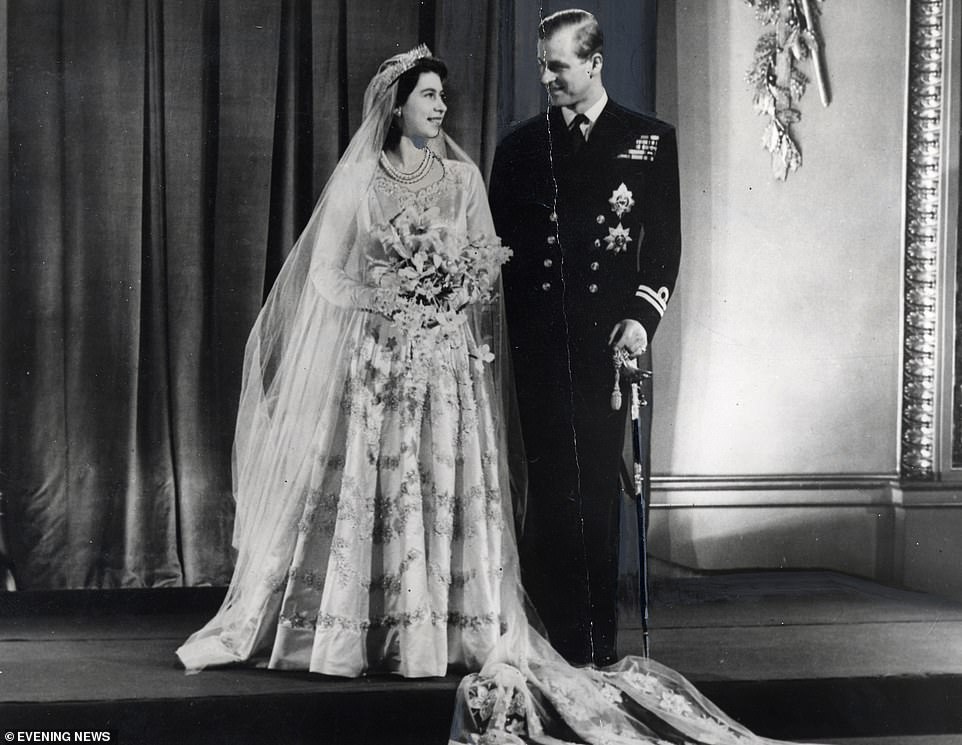 The gun carriage holding the coffin would then pass around the Queen Victoria Memorial, Buckingham Palace and up Constitution Hill to Wellington Arch.

Members of the military would lead the procession, with the royal family and household walking behind – but the Queen would be expected to go straight to Windsor.

At Wellington Arch, there would be a royal salute before a ceremonial transfer sees with the coffin moved to a Land Rover hearse or car and taken to Windsor.

On arrival in Windsor, there would be a slow procession driven up the Long Walk with drummers, military and members of the royal family following behind.

It would move up the Long Walk, through Cambridge Gate and then onto Park Street, High Street, past the Guildhall and Castle Hill and in through the Henry VIII gate.