The makers of royal drama The Crown have said they are ‘deeply saddened’ by the news that His Royal Highness, The Duke of Edinburgh has died at the age of 99.

After Buckingham Palace announced his passing on Friday, in a statement bosses offered their sympathies for The Royal Family as they joined celebrities including Piers Morgan, Susanna Reid and Phillip Schofield in paying tribute to Prince Philip.

A statement said: ‘Netflix, Left Bank Pictures, Sony Pictures Television and the production team on The Crown are deeply saddened to hear of the death of The Duke of Edinburgh. Our thoughts are with the Royal Family at this sad time.’

Prince Philip was famously portrayed by both Matt Smith and Tobias Menzies in the first four series of The Crown.

Meanwhile Piers described it as ‘a very sad day for our country,’ while his former Good Morning Britain co-star Susanna Reid, wrote: ‘Sad news about the death of the Duke of Edinburgh. Such a huge loss for the Queen and his family. His has been her constant, steadfast support.’

Piers tweeted: ‘RIP Prince Philip, 99. A truly great Briton who dedicated his life to selfless public duty & was an absolute rock of devoted support to Her Majesty, The Queen, as the longest-serving royal consort to any British sovereign. A very sad day for our country. Thank you, Sir.’

Moving: Piers Morgan has joined a slew of stars paying tribute to His Royal Highness The Duke of Edinburgh , after his death was announced on Friday at the age of 99 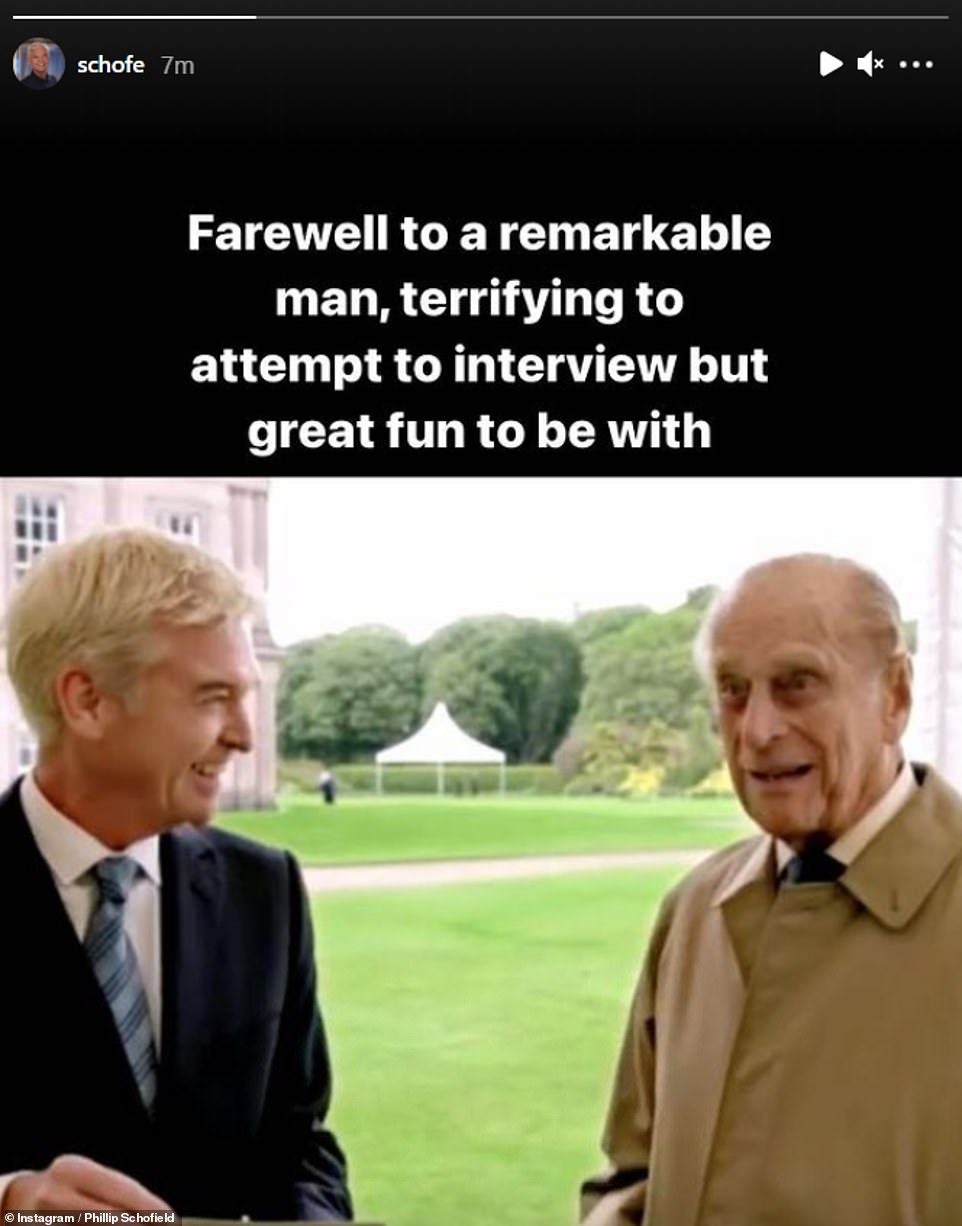 Tragedy: After Buckingham Palace announced his passing on Friday, celebrities including Phillip Schofield took to social media to reflect on Prince Philip’s life and offer their sympathies to his wife, Queen Elizabeth II 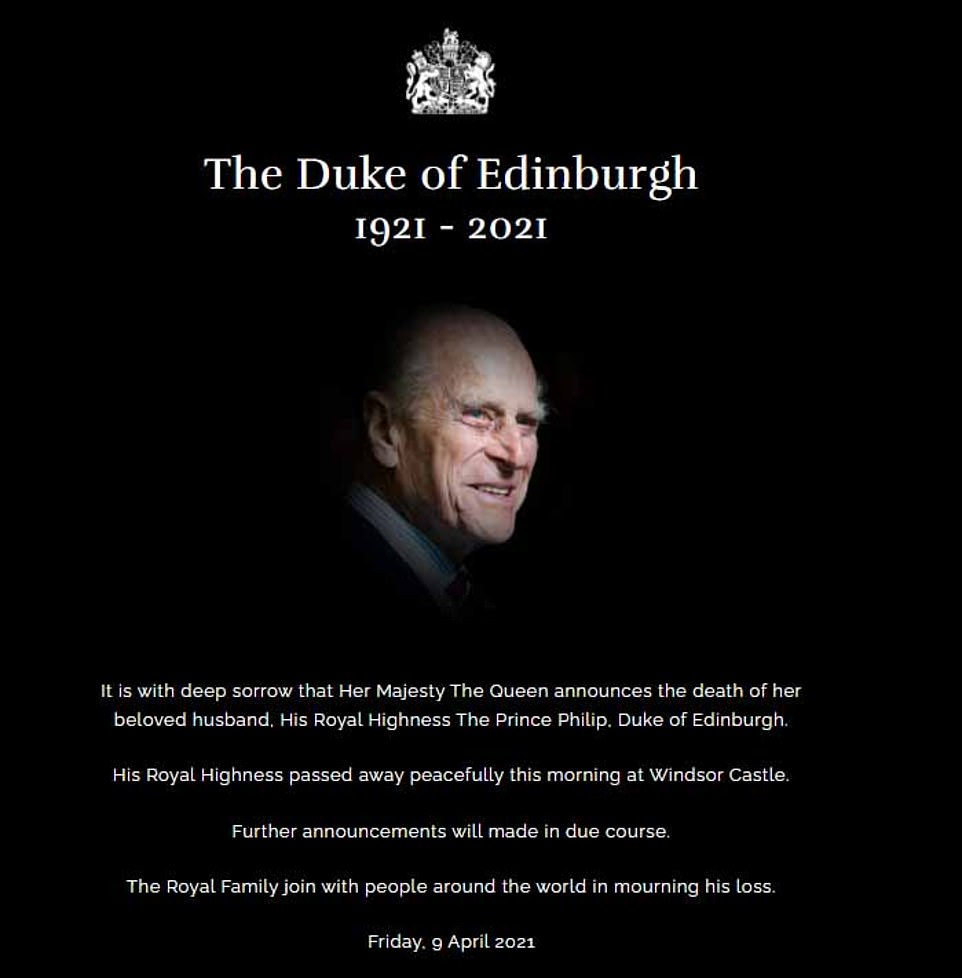 Tragic: Buckingham Palace announced the death of Prince Philip at just after midday on Friday – and described the Queen’s ‘deep sorrow’

Philip Schofield shared an image of his own experience meeting Philip, writing on Instagram Stories: ‘Farewell to a remarkable man, terrifying to attempt to interview but great fun to be with.’

Eamonn Holmes, who had been presenting This Morning when the news broke, simply wrote: ‘HRH Prince Philip has died #RIP.’

Posting an image of The Queen and Philip during their younger years, Amanda wrote: ‘So sad to hear this news. 1921 – 2021. Rest in peace HRH Prince Philip – Duke of Edinburgh. A true gentleman. Our thoughts are with you ma’am.’

The Apprentice star Karren Brady tweeted a snap of the Duke, writing: ‘Very sad to hear that the Duke of Edinburgh Prince Philip has passed away. My thoughts are with HRH & the Royal Family.’

Countdown presenter Carol Vorderman reflected on her own experience meeting Prince Philip several years earlier, tweeting: ‘I went for a private lunch with The Queen at Buckingham Palace quite a few years ago. They were both in their 80s and Prince Philip and she were flirting with each other madly and laughing. Theirs was a love and a marriage of more than 73 years. Deepest condolences Ma’am.’ 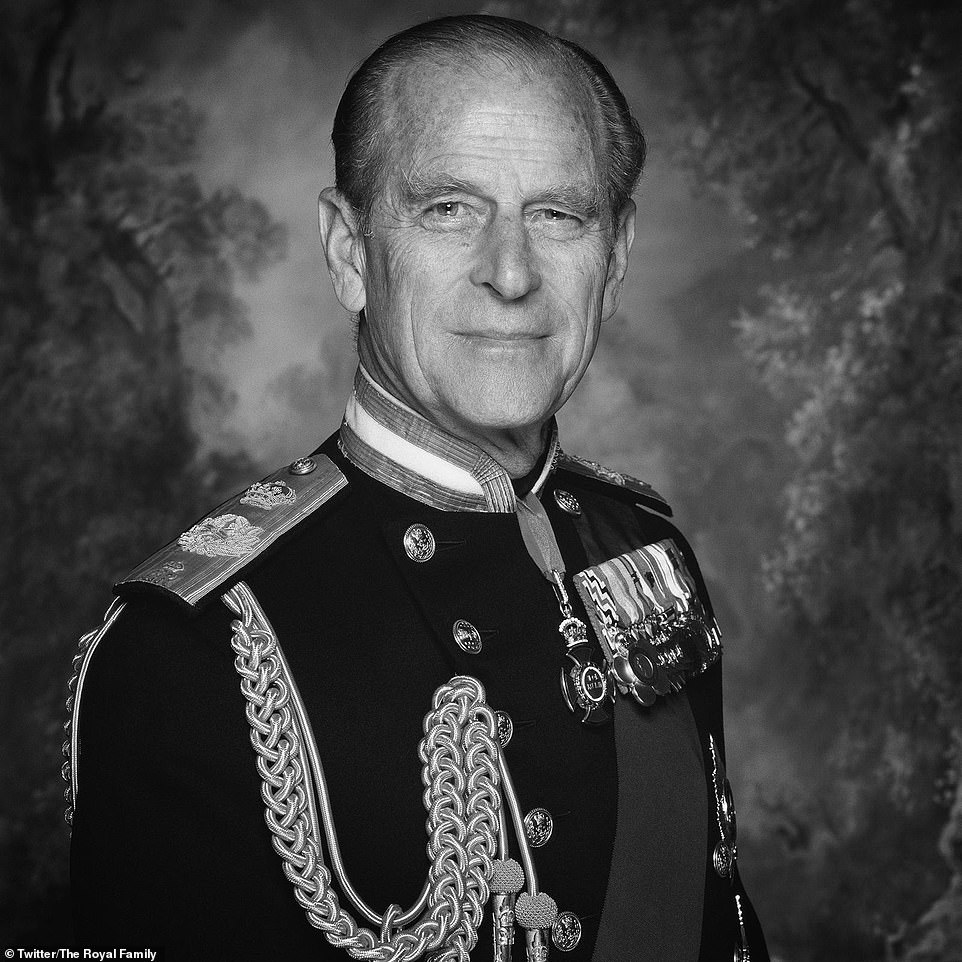 Sad: His death plunges the nation and the Royal Family into mourning, and brings to an end Philip’s lifetime of service to Britain and to Elizabeth, the Queen who adored him since her teens

Upset: Eamonn Holmes, who had been in the midst of presenting This Morning when the news broke, tweeted the news

Emotional: Susanna Reid also tweeted a tribute to the late Duke of Edinburgh, describing it as a ‘huge loss’ for the Royal Family 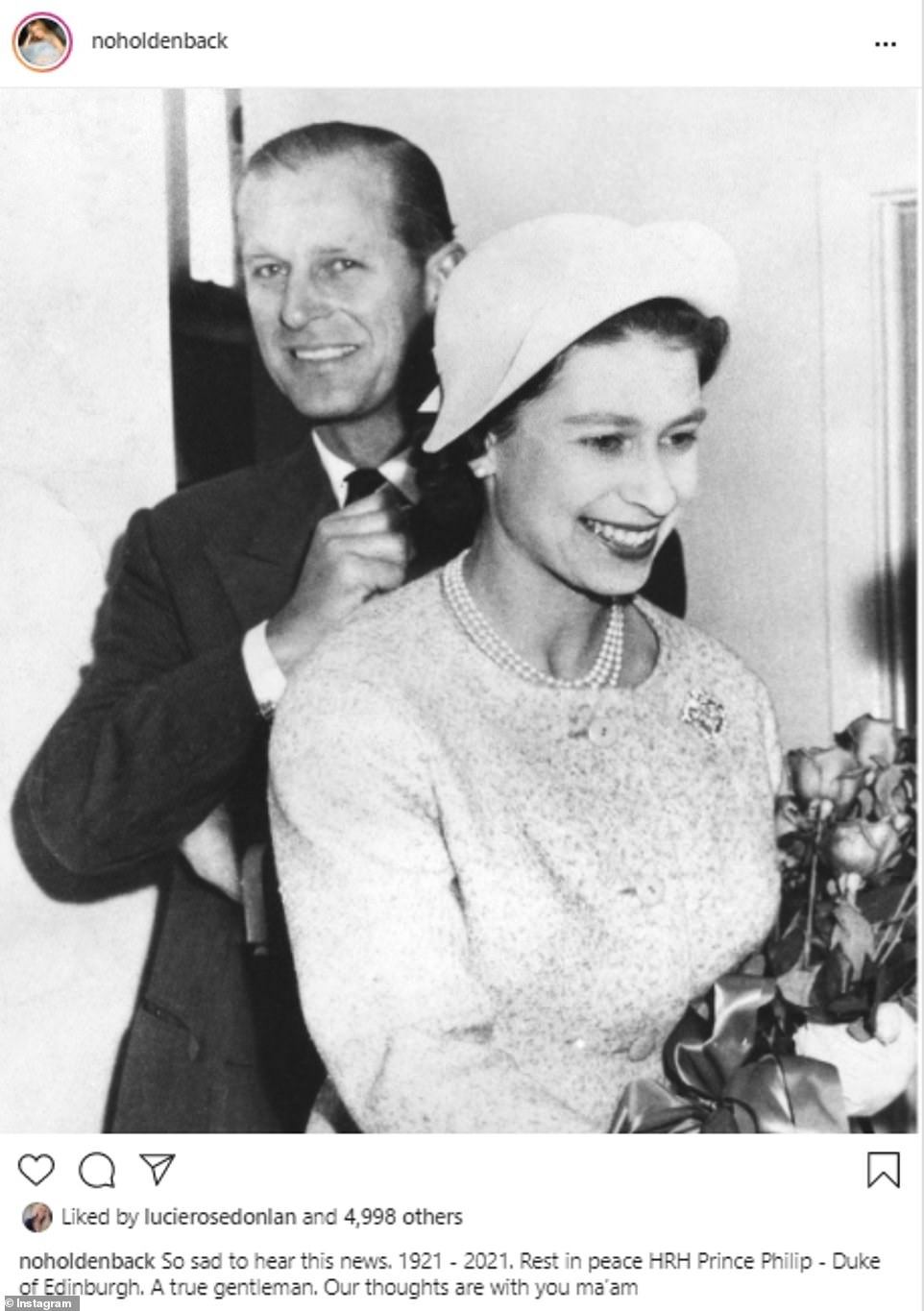 Reflective: Amanda Holden opted to post an image of The Queen and Philip during their younger years, describing him as ‘a true gentleman’ 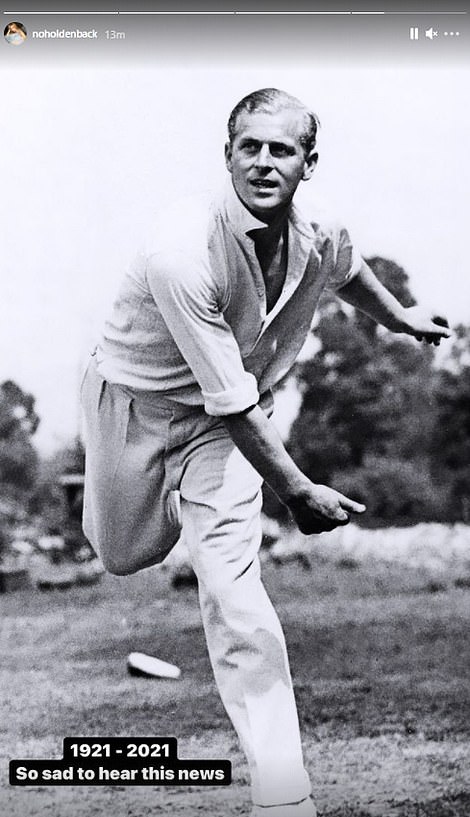 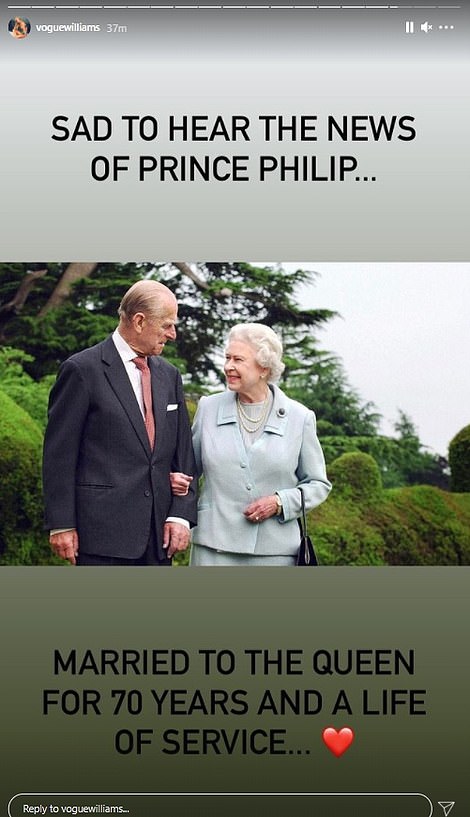 In his heyday: Amanda also shared a classic image of Philip (left) enjoying a game of cricket during his younger years, while Vogue Williams (right) posted a snap of him alongside his wife The Queen 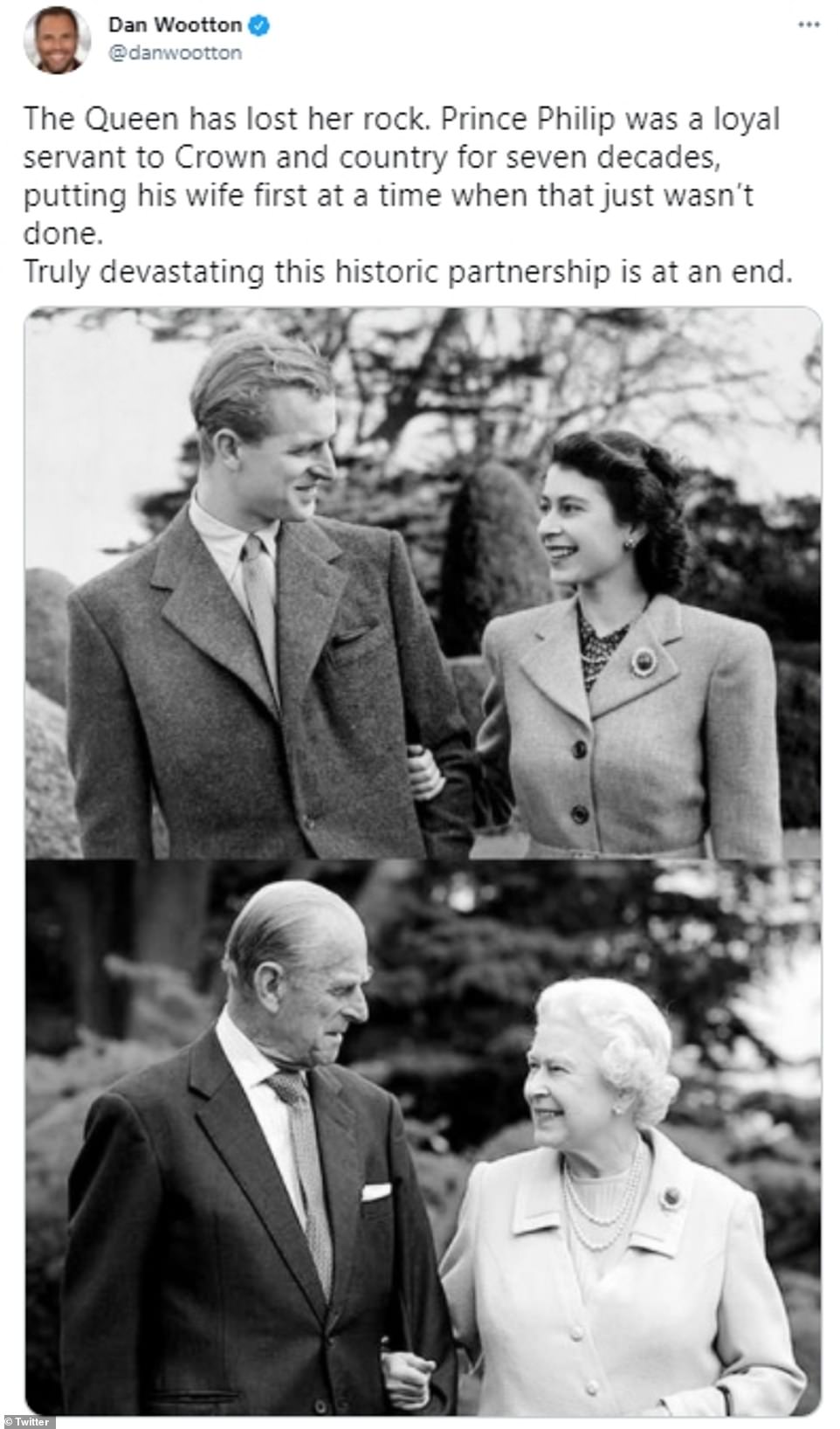 Upsetting: Stars including Carol Vorderman, Geri Horner and Dan Wootton also tweeted their own tributes to His Royal Highness following the news of his death

The Apprentice star Karren Brady tweeted a snap of the Duke, writing: ‘Very sad to hear that the Duke of Edinburgh Prince Philip has passed away. My thoughts are with HRH & the Royal Family.’

Geri Horner, who had Philip’s son Prince Charles in the past, also tweeted: ‘Very sad news about Prince Philip. He was a character. Like a very naughty grandfather. RIP. God Bless The Queen!’

BBC Sport presenter Gabby Logan shared an image of Philip to her Instagram Stories, writing: ‘Whatever you think of the instituaton you can still recognise a decent husband. The definition of backbone, support and selflessness. Rest in peace Prince Philip.’ 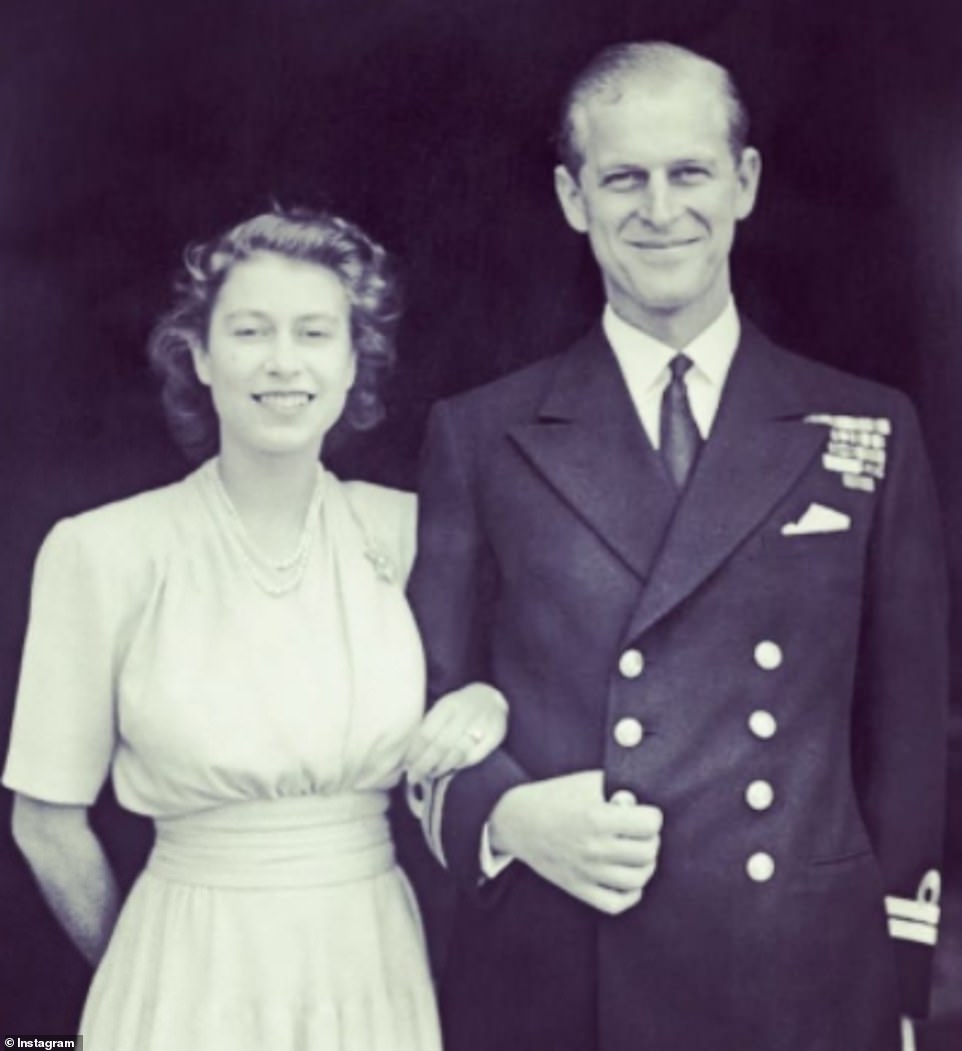 Moving: Penny Lancaster offered her own thoughts for the Royal Family following the news of Prince Philip’s passing

On Instagram Fearne Cotton penned: ‘Rest in peace. Love and prayers to the @theroyalfamily at this sad time. My thoughts are with Her Majesty The Queen due to such loss after so many years together.’

Alison Hammond wrote: ‘RIP Prince Philip, our thoughts are with the Queen and family!!’

Myleene Klass shared a snap of her experience meeting Prince Philip while she was a member of the band Hearsay, writing: ‘Just had to cross over to the newsroom to deliver the sad news of the passing of Prince Philip.’ 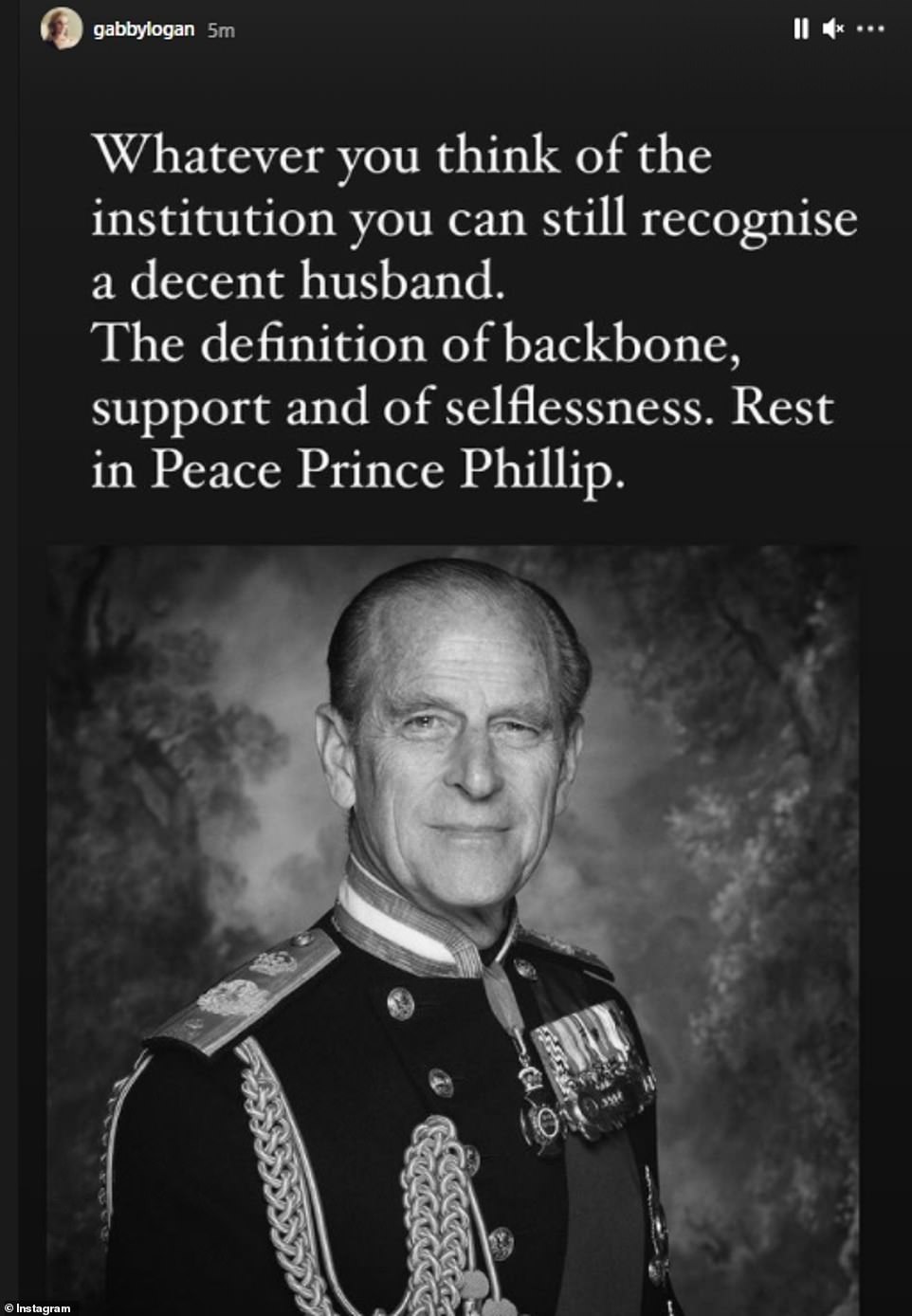 Defiant: Gabby Logan shared her own post for Philip on Instagram Stories, saying he can always be recognised as a ‘decent husband’ 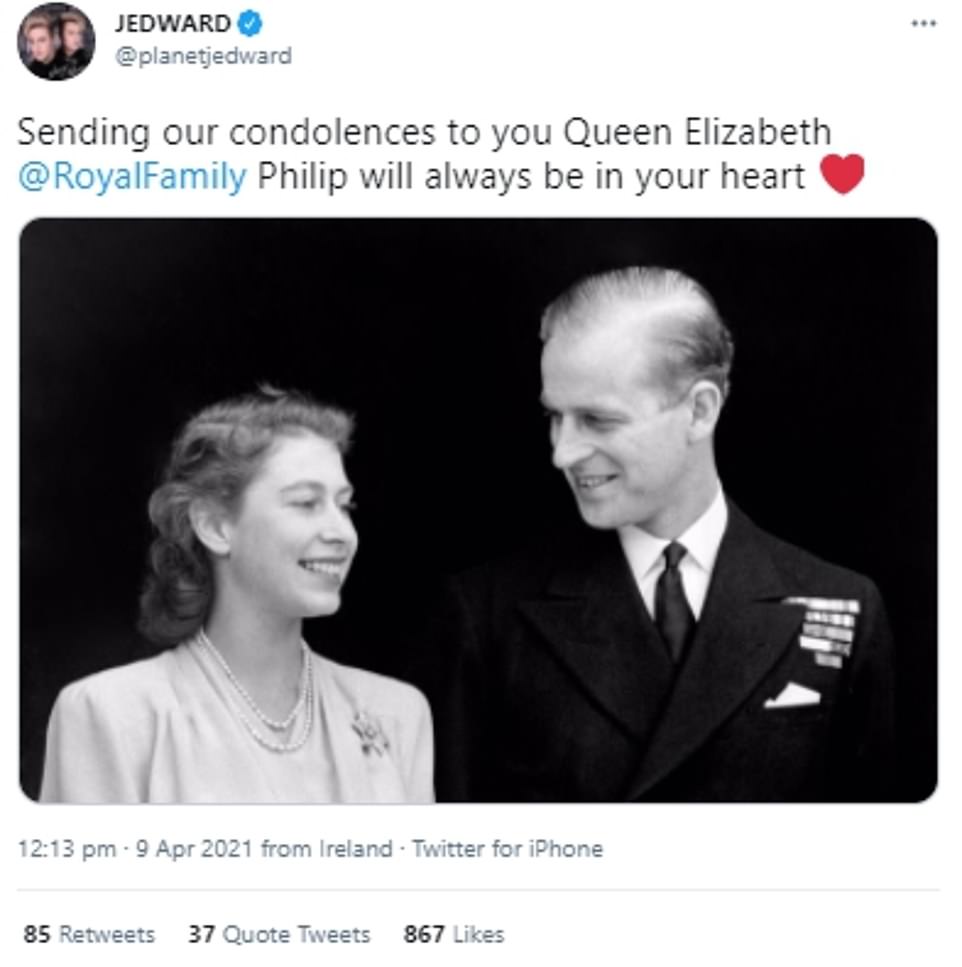 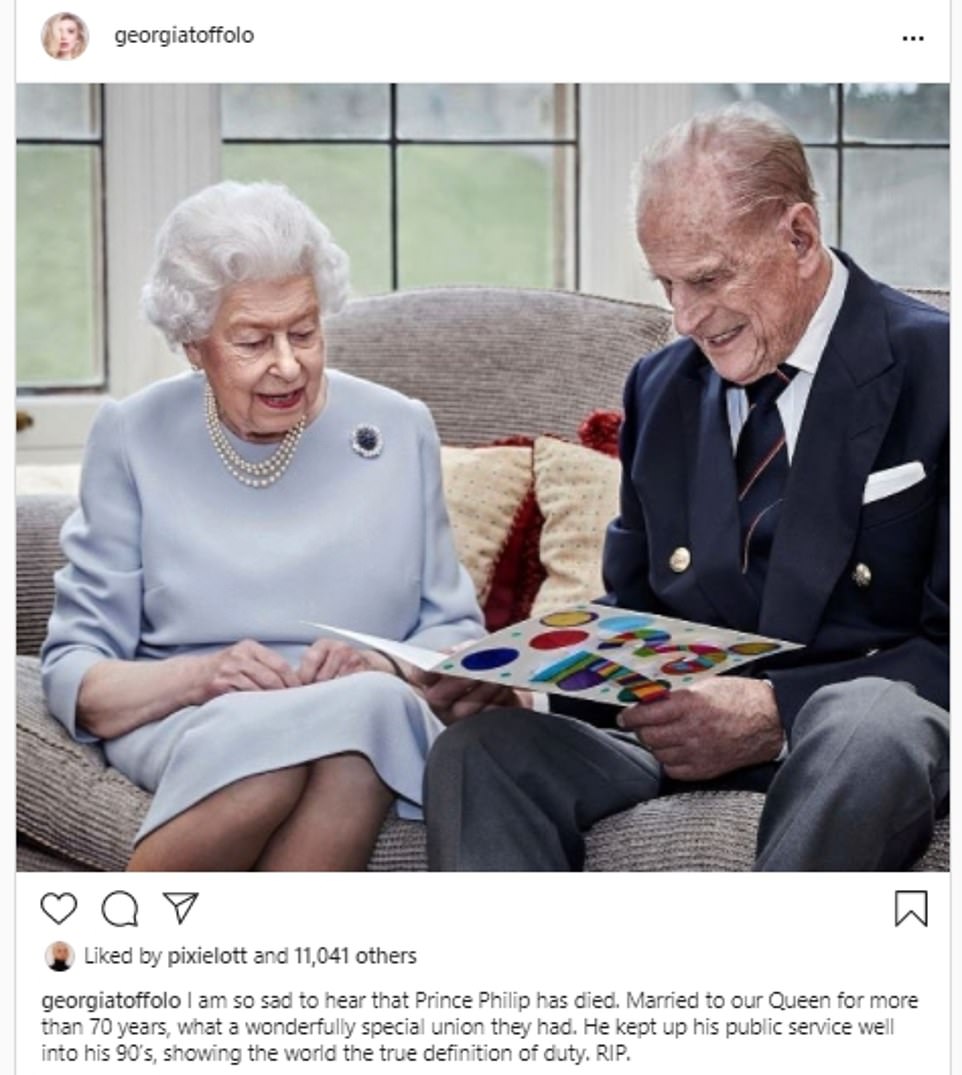 On Instagram Georgia Toffolo wrote: ‘I am so sad to hear that Prince Philip has died. Married to our Queen for more than 70 years, what a wonderfully special union they had. He kept up his public service well into his 90s, showing the world the true definition of duty. RIP.’

‘His Royal Highness passed away peacefully this morning at Windsor Castle. Further announcements will made in due course. The Royal Family join with people around the world in mourning his loss’.

His death plunges the nation and the Royal Family into mourning, and brings to an end Philip’s lifetime of service to Britain and to Elizabeth, the Queen who adored him since her teens.

Her Majesty is now expected to enter an eight-day period of mourning. She will not carry out any duties, even in private, while laws will not be given the Royal Assent and affairs of state will also be paused. A further period of official Royal Mourning is expected to continue for 30 days. 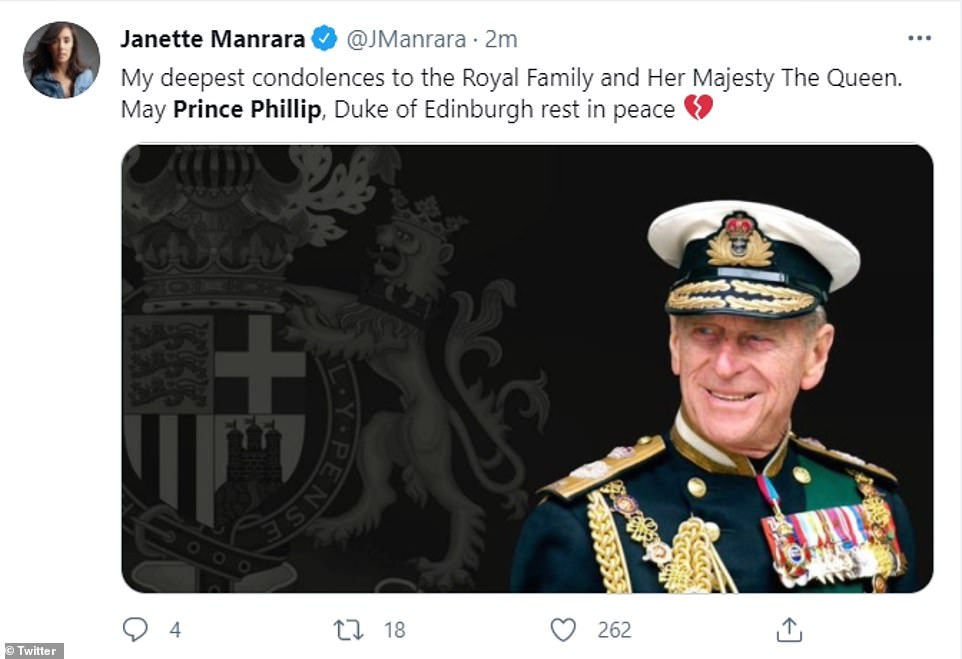 Officials at Buckingham Palace are now preparing for a royal ceremonial funeral at Windsor Castle in Berkshire in keeping with Philip’s wishes, with a military procession also expected in London – Covid laws permitting.

The Queen is in ‘deep sorrow’ following her husband’s death.

‘He has, quite simply, been my strength and stay all these years,’ Her Majesty said at their Golden Wedding banquet in 1997. ‘I and his whole family, and this and many other countries, owe him a debt greater than he would ever claim, or we shall ever know.’ 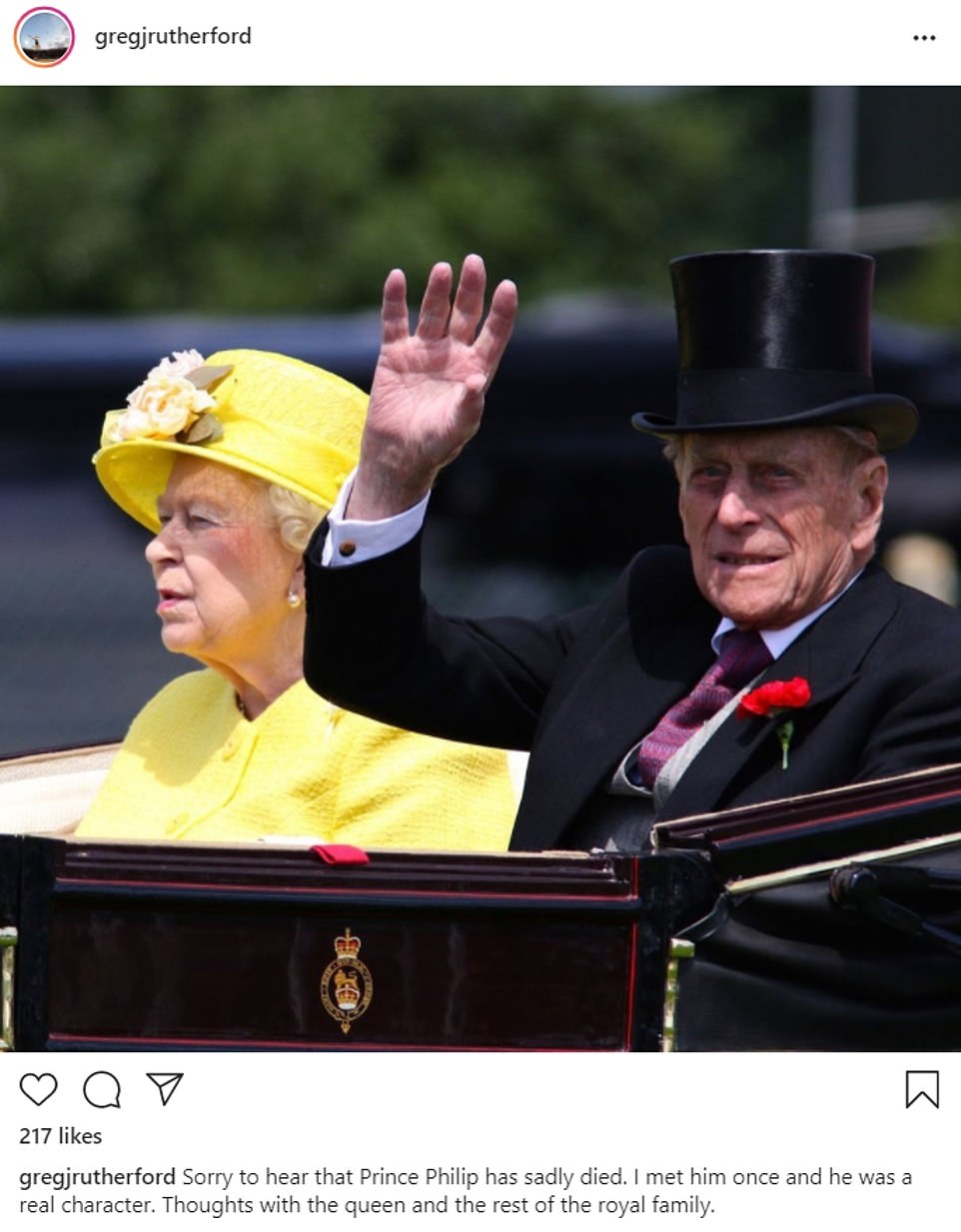 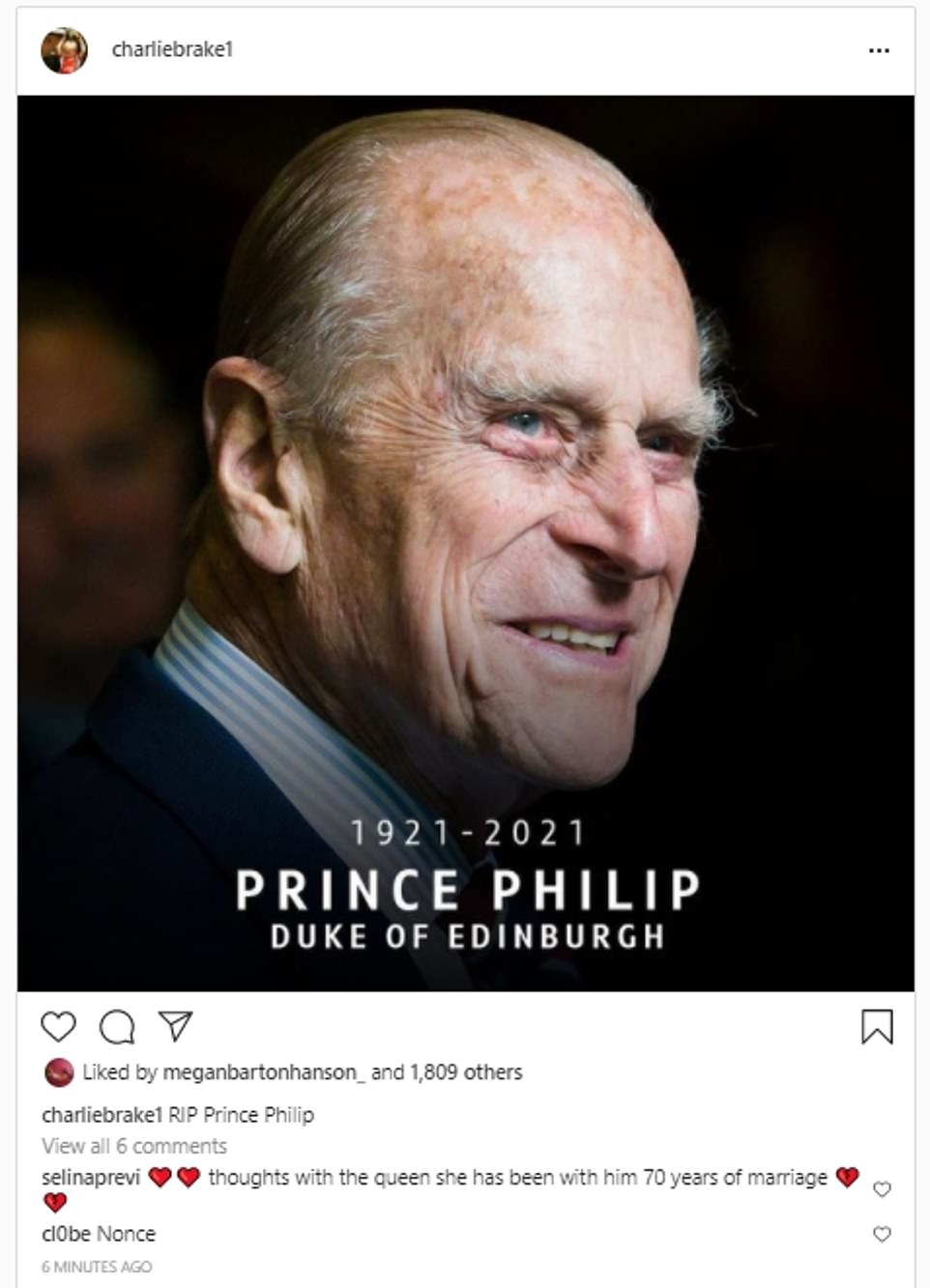 The quizzical, witty, faithful – and often controversial – the Duke was the Queen’s greatest source of support, her confidant and the man she relied on above all others.

Until his death, Philip was the longest-serving consort in British history and the oldest partner of a reigning monarch, who despite his ill health took part her first royal engagement of 2021 last week.

He was a great-grandfather of ten, with the most recent addition to his wider family being Zara and Mike Tindall’s baby son Lucas Philip Tindall on March 21 – soon after Princess Eugenie and Jack Brooksbank’s son August, who was born on February 9.

Philip’s lifelong role was to ensure that he never let The Queen down and their long-lasting marriage was one of the world’s best known relationships.

Reflecting their love in her Diamond Jubilee speech to Parliament in 2012, the Elizabeth said: ‘During these years as your Queen, the support of my family has, across the generations, been beyond measure. Prince Philip is, I believe, well-known for declining compliments of any kind. But throughout he has been a constant strength and guide.’

The couple married in November 1947 – she a 21-year-old sheltered princess, he a swaggering Royal Navy officer with Greek and Danish royal blood, who had only recently seen active service during World War Two.

From that moment, the day Lieutenant Philip Mountbatten became the Duke of Edinburgh, Philip – a private, enigmatic man of strong character – was always there, one step behind, ready to lend the Queen a helping hand.

Following his retirement from public life in August 2017, he kept a low public profile.

In recent months the couple have lived through the coronavirus pandemic together, at Sandringham in Norfolk, during a summer break at Balmoral Estate in Scotland and latterly in what was dubbed ‘HMS Bubble’ at Windsor Castle from October 2020.

The pair received their coronavirus inoculations together at Windsor in January, and the virus was quickly ruled out as the cause of his admission to London’s King Edward VII hospital on February 16.

Buckingham Palace had initially said it was a precautionary measure because the Duke was feeling unwell, and his grandson Prince William said after a week of treatment that he was ‘OK’ but doctors were ‘keeping an eye on him’.

The palace then revealed the Duke was being treated for an ‘infection’, with his youngest son Prince Edward adding that the Royal Family were ‘keeping our fingers crossed’.

But concerns grew when, after two weeks at the private King Edward VII, Philip was transferred to St Bartholomew’s NHS hospital in central London with the palace saying he would ‘undertake testing and observation for a pre-existing heart condition’.

He then underwent a heart operation and was transferred back to King Edward VII’s, before eventually leaving on March 16 and returning to Windsor Castle by car following 28 days in hospital.