From Mayan ruins in the heart of the Chiquibul Forest to the kaleidoscopic colour of the Junkanoo in the Bahamas, it’s been a whirlwind eight days on tour with the Duke and Duchess of Cambridge.

Few could have predicted some of the dramatic twists and turns on the way, let alone William’s unprecedented statement to try to make sense of it all.

But having travelled with the couple every step of the way – unlike the keyboard warriors determined to trip William and Kate up – it is clear to me that their tour of the Caribbean wasn’t the cataclysmic disaster that many would have you believe.

Contrary to the view in some quarters, the couple were very much alive to the optics of ‘colonialism’, opting wherever possible for smaller, more intimate engagements where they were able to meet as many members of the communities they were visiting as possible, rather than grand set-pieces.

The Duchess of Cambridge waves at children during a visit Trench Town, the birthplace of reggae in Kingston, Jamaica, on day four of their tour of the Caribbean on behalf of the Queen to mark her Platinum Jubilee

That’s not to say there weren’t missteps that were rightly highlighted.

Let us not forget it was this newspaper that broke the story that the couple had been forced to pull out of their first major engagement in Belize in a row over the land rights of indigenous people.

I am told that their team knew there was an issue in the region some five weeks ago but, on local government advice, went ahead with it. Wise?

And why then pull out, even on the advice of local government officials? Why not go to meet the community and talk to them about their concerns face to face? The family whose sustainable cocoa farm they had been due to visit was absolutely devastated at such a lost opportunity.

Yes, there was a demonstration against British rule in Jamaica. But it was polite, respectful and comprised only around 100 people – a contrast with the 1,000 or so who turned out to catch a glimpse of them when they visited Trench Town for a football match and to visit the home of Bob Marley.

Were they there for the royals themselves or the spectacle? It’s difficult to say, but the screams and cheers the Cambridges’ arrival prompted certainly outweighed even that of popular Jamaican-born England football star Raheem Sterling. Much has been said and written about the moment the couple were captured on camera putting their hands through a wire fence to greet well-wishers.

Take it from someone who was there: the atmosphere was joyful, the couple were called over by the crowds eager to meet them and instinctively wanted to do so. The alternative was to stand 20ft away, smile and wave. And I don’t think you can get much more ‘colonial’ than that. 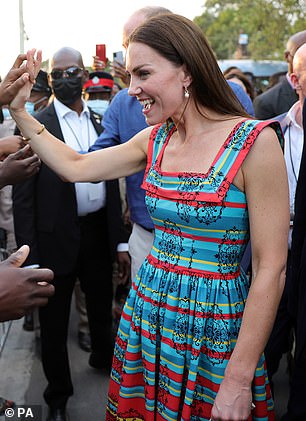 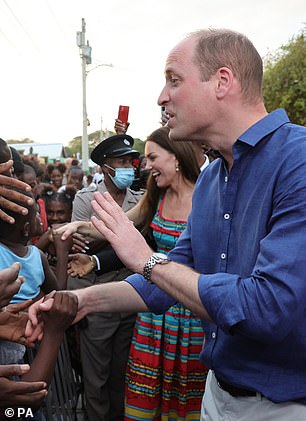 The Duke and Duchess of Cambridge shake hands with locals during a visit Trench Town, the birthplace of reggae in Kingston, Jamaica

That said – and I know Kensington Palace acknowledges this – it did throw into focus how aides rightly need to ‘think out of the box’ and be alive to unflattering optics in a post pandemic, Black Lives Matter world where we all have rightly been challenged to think about our mindset and behaviour. What upset the palace team most, in truth, was the social media ‘pile-on’ engineered by some as a result.

I have no doubt that the whole ethos of royal tours will change from now on. Less celebratory, more cerebral. Minimal pomp and pageantry. What has struck me over recent days is how thoughtful and intuitive William, in particular, has become.

As someone who has travelled around the world with him since his first solo tour of New Zealand in 2005, he is very much a changed man.

In his younger years the notoriously short-tempered prince would have ranted and railed against the headlines – lashing out against the media and blaming everyone else but himself. I’ve seen it myself first hand.

The William I saw on tour was calm, measured and alive to everything going on around him. He showed real leadership and genuine empathy for those he met. I hesitate to say this so soon, but I suspect he will make a fine king.

His statement at the weekend was an absolute masterclass in diplomacy, showing both humility and acknowledging his critics without kow-towing to them.

He and Kate were also stronger as a team than ever before.

William is inordinately proud of her and she is starting – at long last – to come out of shell, even taking the lead on engagements, walking out of the car first, hand outstretched.

William benefits from his mother’s aura still, but Kate has created one all of her own.