Prince William has arrived at Wembley to greet players from Watford and Manchester City ahead of this afternoon’s crunch FA Cup final tie.

But the Duke of Cambridge’s appearance at the match came at the expense of attending Lady Gabriella Windsor’s royal wedding to Thomas Kingston, which saw the Queen, Prince Philip and Prince Harry among the guests.

William shook hands with footballers from both teams and also the match officials shortly after meeting with BBC Sports presenter Dan Walker.

Manchester City’s David Silva opened the scoring in the 26th minute after his shot deflected off Kiko Femenia and hurtled into the net. 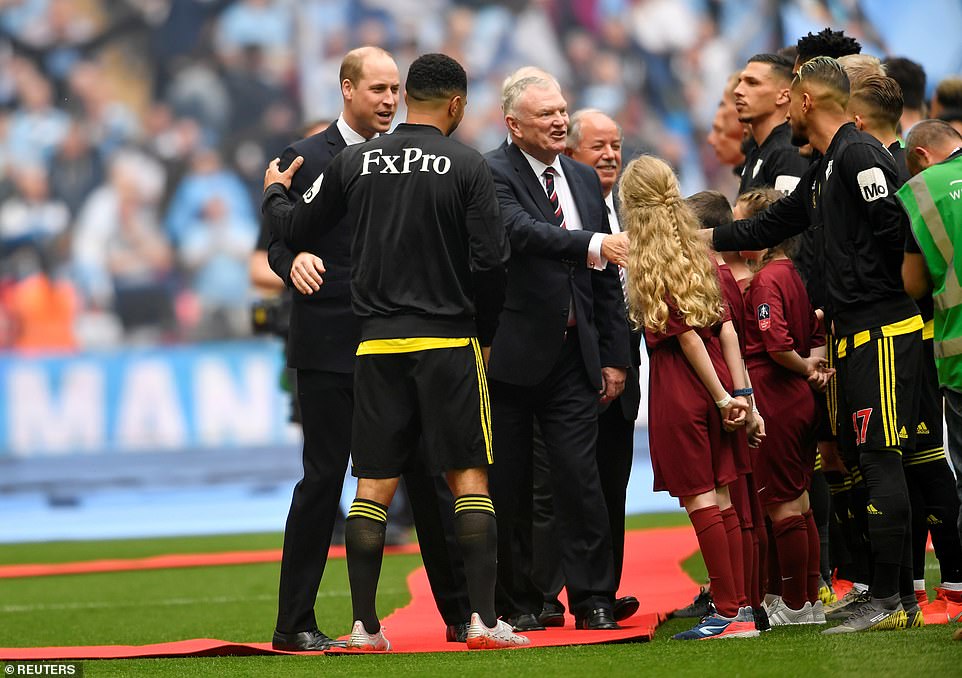 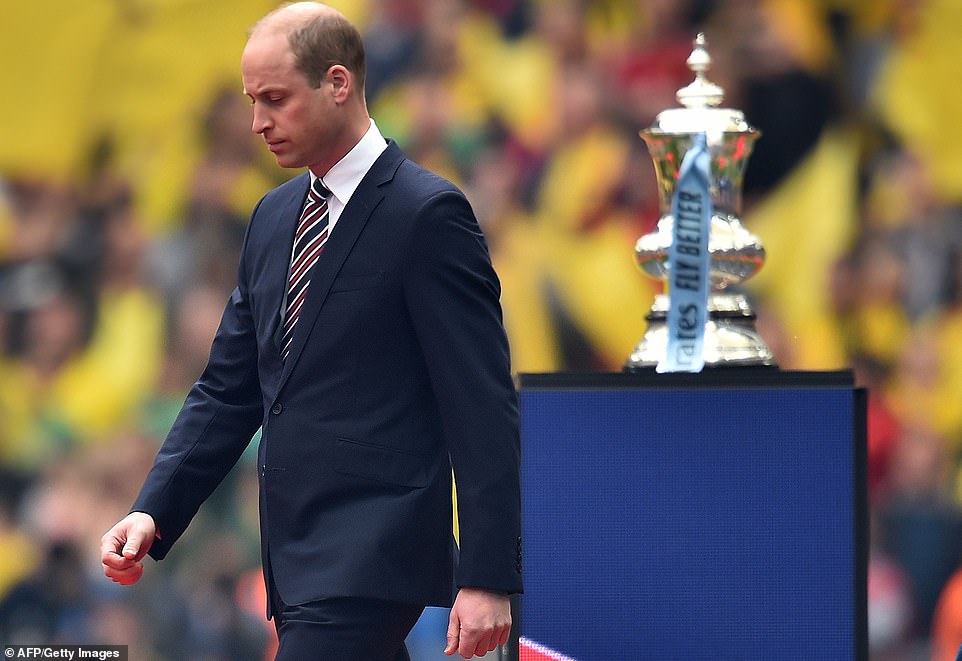 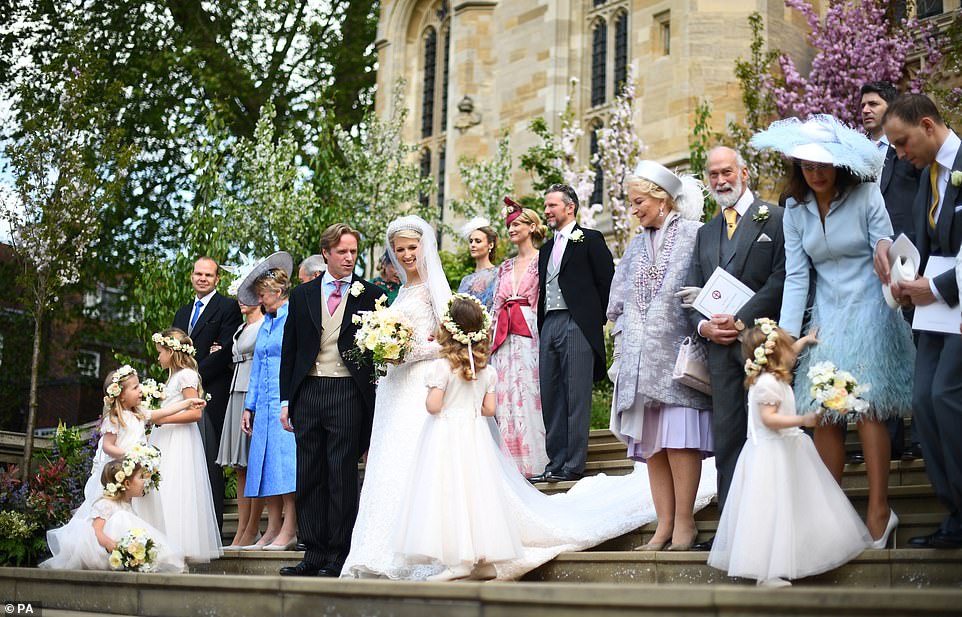 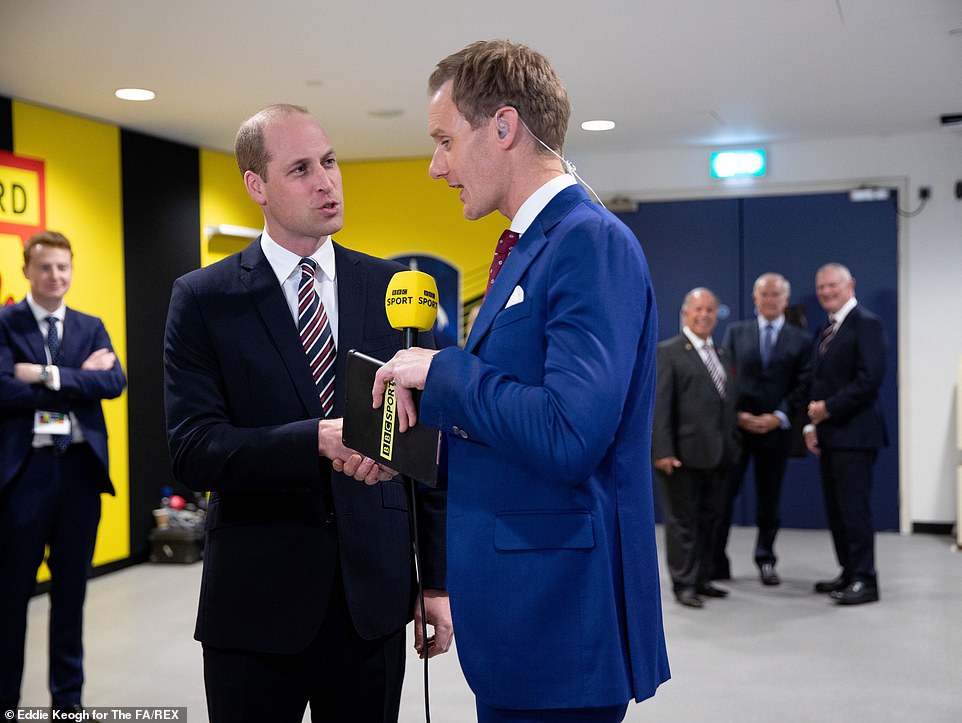 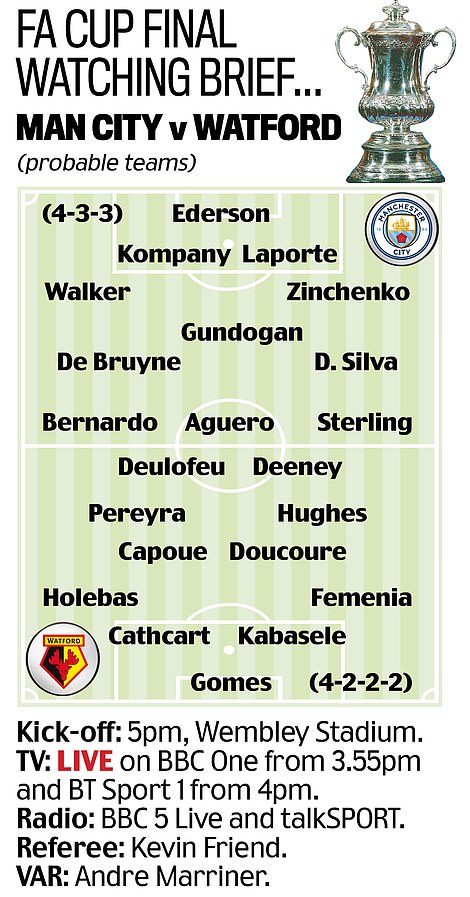 Watford’s training ground this week was a sunny place in more ways than one. Troy Deeney was, as usual, at the centre of it.

‘Come on then,’ he grinned at the man from one of the tabloids. ‘Let’s do this interview for your silly newspaper.’

Across the car park, Ben Foster was dashing for his car and home for the school run. ‘The holidays are almost here,’ he smiled.

For the Watford goalkeeper, they have already started. His Premier League understudy Heurelho Gomes is expected to start in Saturday’s FA Cup final.

Midfielder Will Hughes strolled past. He is known to have team-mate Gerard Deulofeu in his fantasy football XI. Along the path, Tom Cleverley chatted amiably to a reporter he knows. Once of Manchester United, Cleverley has known big games before.

The atmosphere felt relaxed and it felt optimistic, as though something good was round the corner.

One hopes Watford manager Javi Gracia and his players can take this on to the field at Wembley because, when you play Manchester City, optimism, ambition and courage have to go with you.

If this Premier League season has taught us anything it is that hoping to stifle Pep Guardiola’s City, trying to smother them with a blanket of defenders, will get you precisely nowhere. It may earn you a narrow defeat, but what good is that in an FA Cup final? 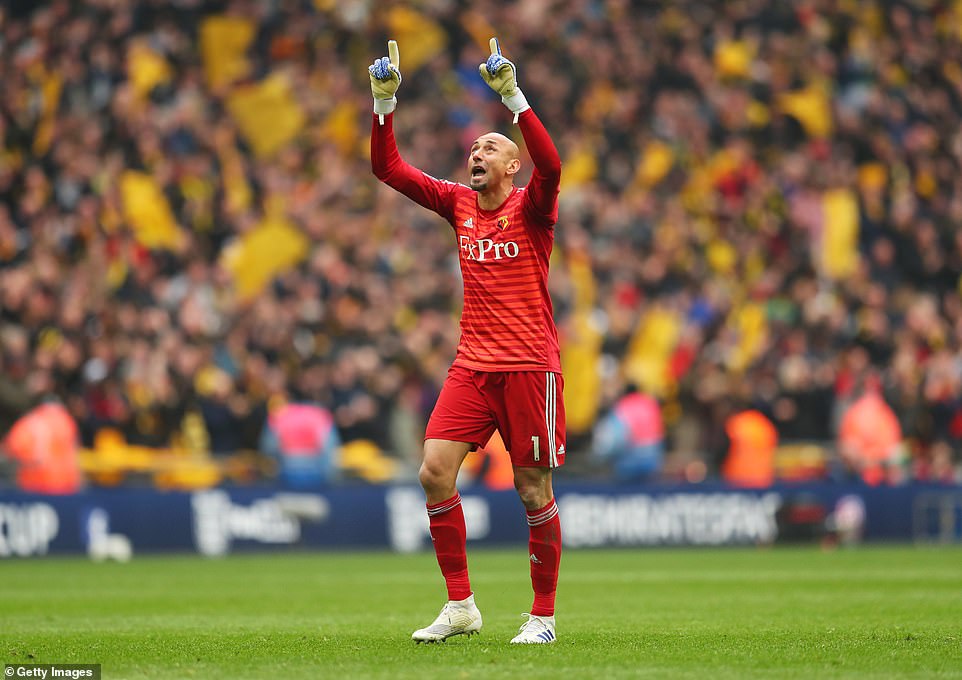 Watching Newcastle and Leicester stand up to Liverpool and City at the end of the league season was a thrilling spectacle and long overdue. Both lost by a single goal in games that could have swung the other way.

At Wembley late on Saturday afternoon, the onus is on Watford to do the same. City are a wonderful football team who have shown us things we may never forget as they pipped Liverpool to the line by a point.

Their manager said on Friday that they are not ready to be considered among the Premier League’s best ever but he was quite wrong about that.

So after a title race that only really ever featured two teams, there is an argument that suggests the man in the street needs the FA Cup more than ever.

Cup competitions offer hope. At kick-off, the playing field feels level. A good showing by the underdog is required if City are not going to stroll to the first domestic treble in the history of our game. 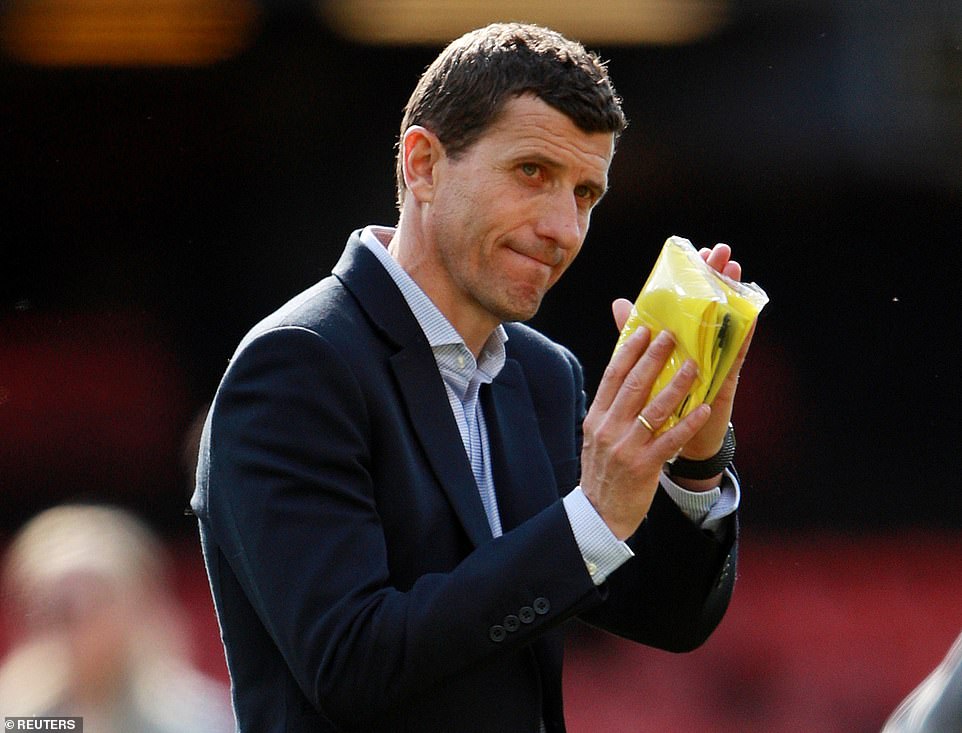 Javi Gracia must maintain the positive attitude, and translate it to their play, to cause an upset

Can they be beaten? Yes, they can. City will have to be slightly off but that is not out of the question, given the effort that went into clinching the title last weekend and the emotional plunge that will undoubtedly have followed.

Watford, meanwhile, must look to match-winners and hope they come to the fore. If mental attitude is important then Deeney is unlikely to be found wanting, while Deulofeu won Watford’s semi-final against Wolves almost on his own.

‘I think if I play well they’ll have had a very difficult day,’ said Deeney. ‘If there’s a lot of crosses in the box, as much as I really respect Mr Kompany, he would say it’s not going to be an easy day for him.

‘If I’m on my A-game it’ll be a very difficult game for whoever’s playing. I have never played in a final before. The only one would have been a school, county game or something.’

FA Cup finals used to have that once-in-a-lifetime feel about them. That was until it became a fixture dominated by the big clubs and populated by players used to a diet of Champions League matches and international tournaments. 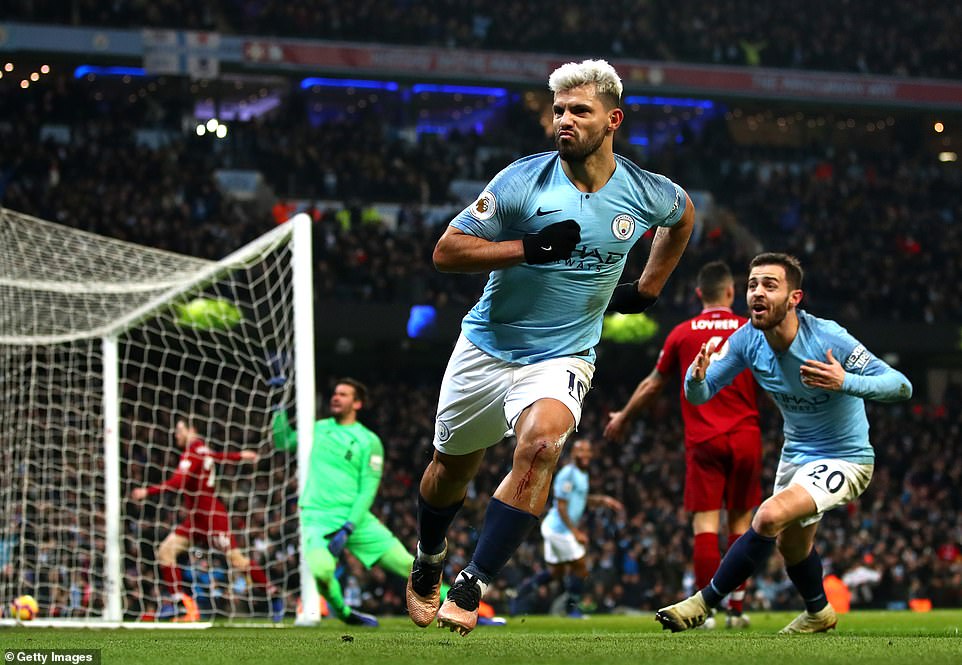 Watford are undeniably welcome, therefore. They have progressed in the league under Gracia this season and will in all likelihood do so again next time round if the club resist for once the temptation to change their manager during the summer.

Despite what Guardiola says, City stand on the cusp of great achievement. The Spaniard continues to obsess about the Champions League but UEFA’s blue-riband competition is not the only test of a very good team.

To win three domestic trophies would say everything about the quality of the City squad but also about its depth and Guardiola’s admirable commitment to every competition his team enters. Guardiola touched again on Friday on the issue of credit and how much his team have or have not received from the general public. He was a little contrary about it but it clearly does irk him a little. It really shouldn’t.

Trophies will close down every single argument in football and, having won 22 very big ones in his managerial career, he should know that better than most. Guardiola does not have an FA Cup and it is clear that means something to him.

Nevertheless, there is opportunity at Wembley for Watford if they choose to open their eyes and look at it. A bit of bravery may take them further than they ever would have imagined.