Prince William yesterday visited the Imperial War Museum to discuss the launch of new galleries which will tell the story of the Holocaust in conjunction with the Second World War for the first time.

His visit came as the museum, in South London, outlined visionary plans to retell the story of the Holocaust in the context of the war and revisit survivors’ tales while also delving into the lives of the Nazi perpetrators.

As part of the £33.5million project, the museum will examine common but false preconceptions: the ideas that the Holocaust was contained within Germany, that Nazi commanders were forced to carry out atrocious acts, and the belief that concentration camps were run in a sanitised way. 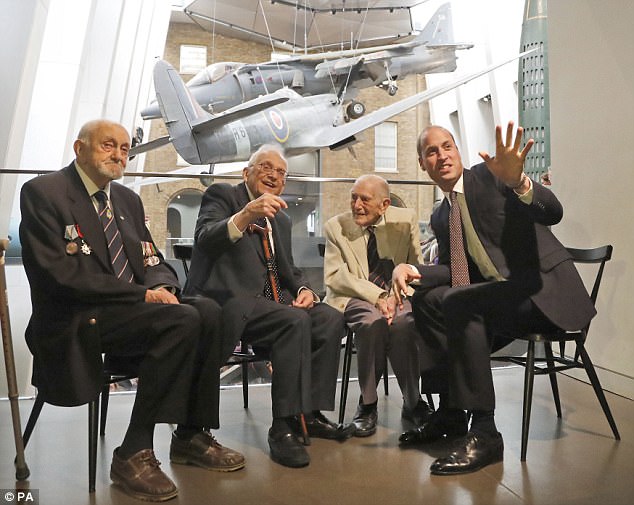 The Prince met with concentration camp survivor Freddie Knoller (second left) along with Second World War veterans Ted Cordery (left) and John Harrison (second right) as he heard about the project, which aims to dispel myths about the Holocaust

The Duke was welcomed by Viscountess Rothermere, whose husband Viscount Rothermere is chairman of the Imperial War Museum’s Foundation board.

Yesterday there was a meeting of several media publishers to discuss plans for the new galleries that are to be launched in 2020. Richard Caring, Sir David Barclay and Lord Bamford were also at the lunch.

James Bulgin, head of content at the Holocaust galleries, revealed plans to exhibit items such as photographs of Nazi commanders apparently celebrating the ‘liquidation of Hungarian Jews’. 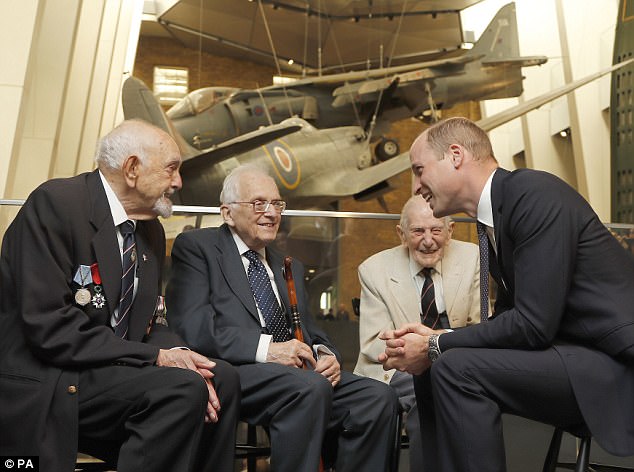 The Prince spoke to the survivors, before hearing how the new £33million exhibit will include a railway carriage used to transport Nazi prisoners to the camps

Mr Bulgin spoke of one picture which shows Josef Mengele, the Auschwitz doctor also known as the ‘angel of death’, celebrating and drinking.

He said: ‘He had a four-month-old son when those photos were taken…across that period when he was doing those appalling experiments, he was also becoming a father.’

One haunting display will consist of a train carriage – used to transport prisoners to the concentration camps and return again with the belongings of those who had been sent to the gas chambers.

The galleries will explore the camps in detail, breaking down preconceptions that they were run as bureaucratic operations.

‘There is nothing clean or sanitised, it was brutal, bloody, barbaric and intimate. The whole thing is appalling and I think it’s really important that we have a sense that it isn’t just about fixed modernised industrialised processes,’ Mr Bulgin added. 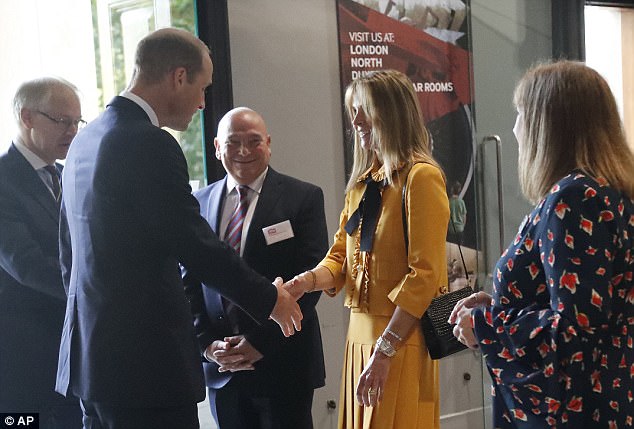 The Duke was welcomed by Viscountess Rothermere, whose husband Viscount Rothermere is chairman of the Imperial War Museum’s Foundation board 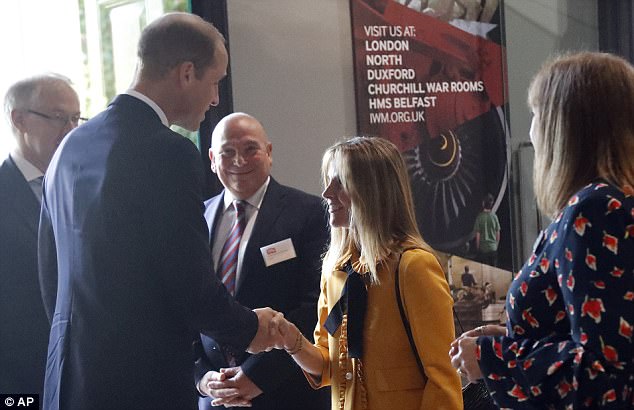 He also described high-ranking Nazi commanders leading operations as ‘highly intelligent’, adding: ‘This sense that they were following orders or that they had no choice is nonsense…but it has been allowed to persist because it is somehow comforting to believe that.’

Mr Bulgin hailed the project a ‘global first’, explaining how the museum aims to ‘prompt questions’ in a ‘gallery fit for the 21st century’.

He added: ‘One of the really difficult things with this history is that 20 years ago there were large numbers of survivors alive, now there are not really.

‘I had a really moving conversation with a survivor, where he said to me, ‘We are entrusting you with our story now’…it really struck me on a really personal level.’

The Duke of Cambridge met Auschwitz survivor Freddie Knoller, 96, and war veterans Ted Cordery, 94, and John Harrison, 103, as part of his role as president of the Imperial War Museums Foundation.