The Duke of Cambridge has told how he will fully support his children if they come out as LGBT as he visited the Albert Kennedy Trust in London on Wednesday.

Prince William, 37, said it would be ‘absolutely fine by me’ if in the future Prince George, five, Princess Charlotte, four, or Louis, one, came out as gay or lesbian.

William’s candid admission came when he visited the headquarters of the LGBT charity dedicated to helping young people made homeless because of their sexual orientation.

During a discussion with a group of people being supported by the charity one person asked the father-of-three: ‘If your child one day in the future said: “oh I’m gay, oh I’m lesbian” whatever, how would you react?’

The Duke, who was making what is thought to be the first visit by a member of the royal family to a dedicated LGBT organisation, replied: ‘I think you really don’t start thinking about that until you are a parent and I think – obviously, absolutely fine by me.’

He went on to add: ‘The one thing I’d be worried about – particularly the roles my children fill – is how that is going to be interpreted and seen.’

The Duke of Cambridge, 37, said he will fully support his children if they come out as LGBT as he visited the Albert Kennedy Trust in London on Wednesday. Pictured, the father-of-three shared a joke with trust chief executive officer Tim Sigsworth before being handed a gift bag 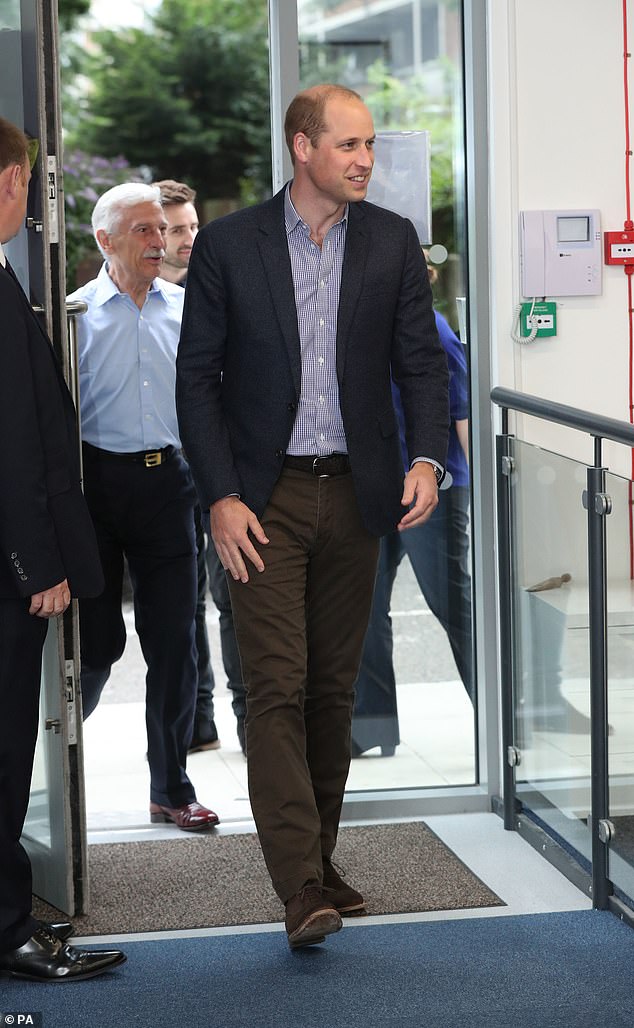 The Duke of Cambridge, 37, visited the Albert Kennedy Trust in London to learn about the issue of LGBTQ youth homelessness on Wednesday 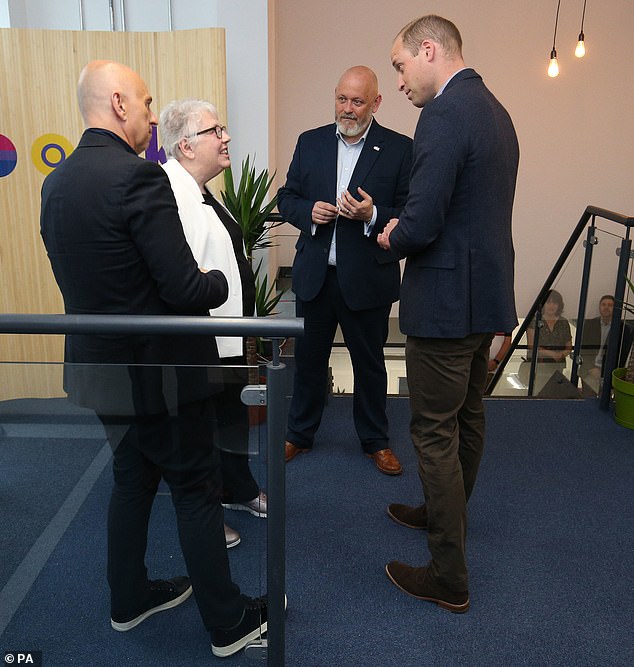 During his visit, Prince William engaged in conversation and learned about the unique approach the organisation is taking to tacking the problem of homelessness

The Prince donned a navy blazer and brown trousers during his visit, where he learned about the issue of LGBTQ youth homelessness.

He also heard about the positive change the charity are enacting through their unique prevention and early action approach.

The royal also officially opened the new services centre in Hoxton which will host drop-in sessions for young people and grow its youth engagement offering.

His visit comes ahead of the annual Pride in London parade and is in recognition of the 50th anniversary of the Stonewall uprising.

Almost one quarter of the 150,000 young people facing or experiencing homelessness identify as LGBTQ, and 77 per cent of those cite rejection or abuse from their families as what has led them to being so.

His Royal Highness met with individuals who have been supported by the charity and spoke to staff about the services they provide.

These include the safe house ‘Purple Door’, carer services, in-person and online mentoring programmes and a range of youth engagement activities.

The charity runs an online support service and has centres in London and the North West and North East. 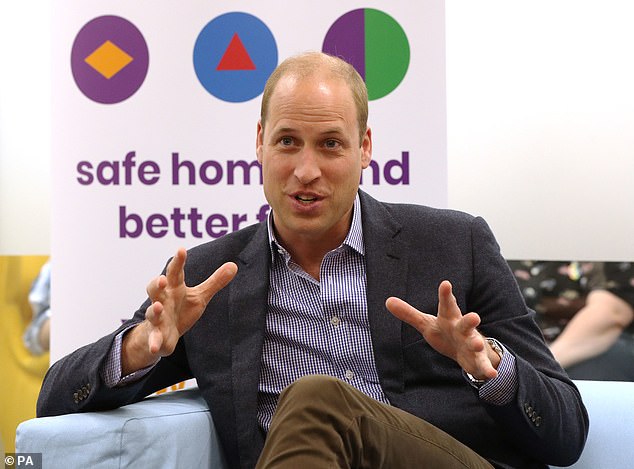 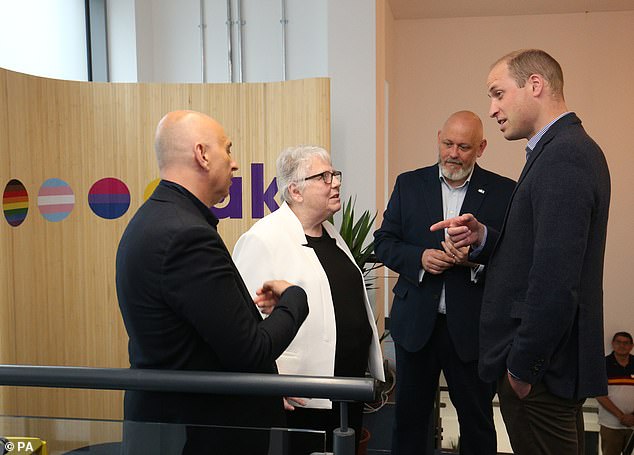 The Duke of Cambridge talked with (left to right) Chief Executive Tim Sigsworth, founder Cath Hall and Chair of Trustees Terry Stacey, during the visit to the Albert Kennedy Trust

In 30 years, the voluntary organisation has provided over 250,000 nights off the street and helped over 50,000 gay youngsters at risk of, or experiencing homelessness.

The services team is made up of caseworkers who support young people to achieve better futures – including supporting them with job hunting and interview preparation.

They also ensure the youngsters have food, clothes and shoes, that their well-being is stable and that they know how to complete the right documentation for anything they might need.

It is not the first time the Prince has become involved in LGBT issues. Three years ago, he appeared on the cover of the gay magazine Attitude, and used an interview to highlight homophobic, biphobic and transphobic bullying and the resulting effects on people’s mental health.

The Duke is a longstanding supporter of organisations working to combat homelessness, and is Patron of Centrepoint and The Passage.

The Stonewall uprising took place in New York on June 28, 1969, and is seen as the moment that sparked the modern LGBTQ movement around the world. 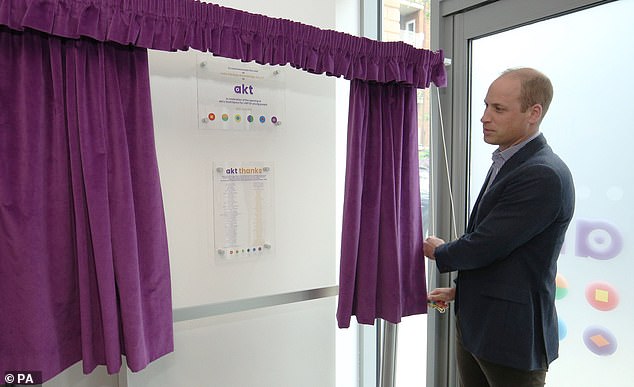 The Duke of Cambridge (pictured) unveiled a plaque as he officially opened the charity’s new services centre in Hoxton, which will host drop-in sessions for young people and grow its youth engagement offering 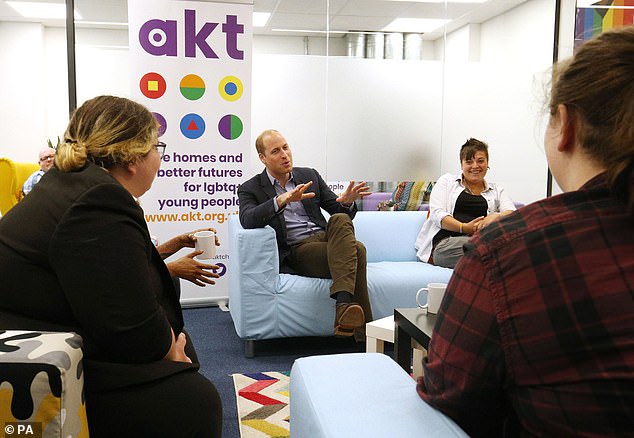 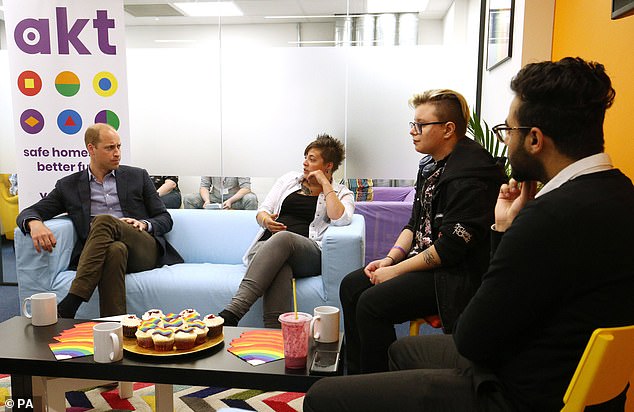 Prince William listened to former and current service users (left to right from centre) Claire Evans, Aster Cassar, and Mish Marvelas they sat around on the sofas

Pride marches around the world will be recognising the anniversary, including Pride in London, where staff and supporters from the charity will be marching.

It is believed the Duke is giving his support to the Albert Kennedy Trust after Lady Gaga recommended that he get involved.

The pair first teamed up together after William read an open letter by Gaga about living with post-traumatic stress disorder. They then collaborated on a project for Heads Together, a mental health initiative spearheaded by The Royal Foundation, in 2017.

A source told The Mail on Sunday: ‘They met during the campaign and they’ve kept in touch. Lady Gaga encouraged him to get involved with Akt as she has previously done work with them.

‘The stories she shared with him inspired him to lend a hand.’

The charity was founded in 1989 by Cath Hall, a foster carer, who named it after a 16-year-old boy who fell to his death from a Manchester car park after being chased by a gang. Albert, who was gay, had run away from a children’s home in Salford and had suffered appalling homophobia.

Ms Hall described establishing the trust – which has several high-profile patrons including Sir Ian McKellen – as ‘an emotional response, an angry response, to what was going on’. 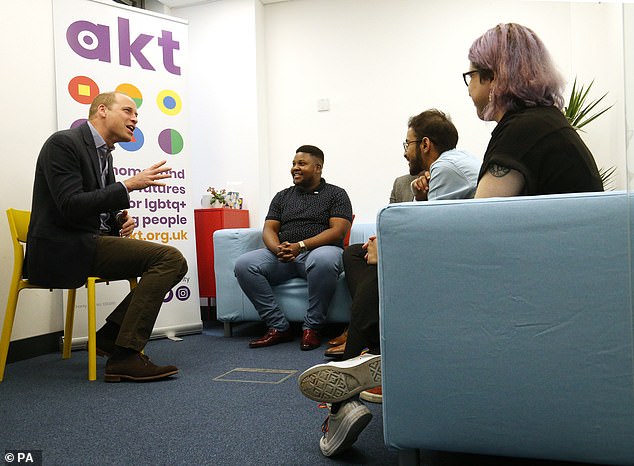