Prince William today interviewed Sir David Attenborough in front of the world’s most influential billionaires and leaders who the celebrated naturalist warned directly: ‘We’re in danger of destroying the natural world – and ourselves’.

British royalty met with TV royalty after the Britons flew into the Swiss Alps resort of Davos to attend the 49th the World Economic Forum (WEF).

The Duke of Cambridge has described the Blue Planet and Dynasties narrator as having ‘the single most important impact in my conservation thinking’.

William today asked Sir David about his decades of work highlighting the importance of the natural world – and his message for the rich and powerful watching them on stage.

Sir David, 92, said: ‘Care for the Natural World – not only that – treat it with respect and reverence. We can wreck it all without even noticing and in the end we will wreck ourselves’.

He added: ‘Every breath we take and everything we eat comes from the natural world. We are destroying that world and ourselves’.

William hailed the impact of Sir David’s programmes and said they had been ‘seen be literally billions of people world-wide’ and trailed his new show Our Planet, released on Netflix in April.

As Sir David discussed the difficulty in capturing the fast-moving glaciers on film, William joked that they were ‘a bit like children – unpredictable’. 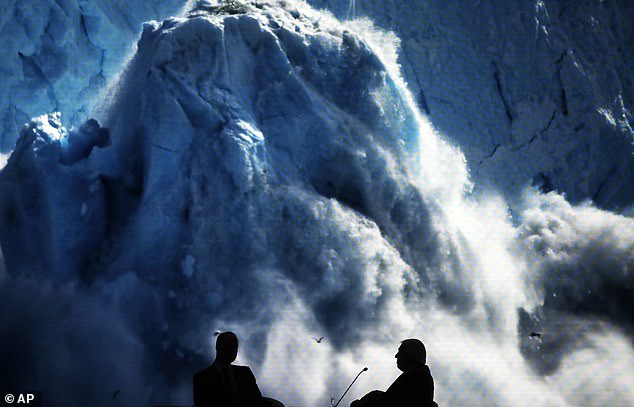 William and Sir David watch a glacier crashing into the sea for the star’s new show Our Planet, released on Netflix in April 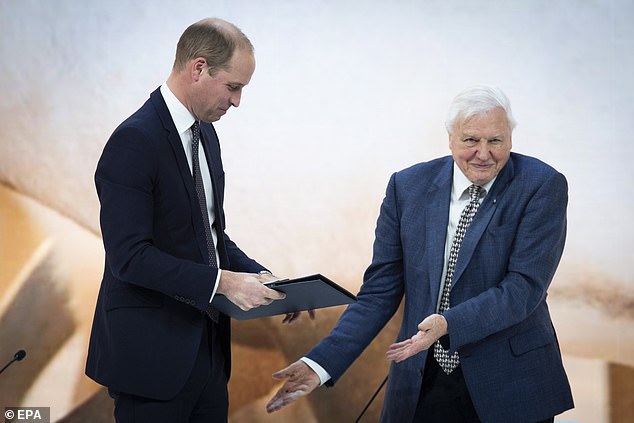 Sir David won a standing ovation from delegates after warning them that the planet faces destruction if climate change is not dealt with imminently.

He said it is ‘difficult to overstate the climate change crisis’ adding humans have become ‘so numerous’ and possess a ‘frightening’ array of destructive mechanisms that ‘we can exterminate whole ecosystems without realizing.’ 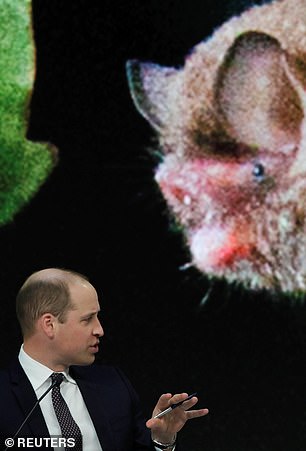 The heir to the British throne had started the interview by saying: ‘It’s a personal treat for me to be sitting here you asking questions. Normally I have to endure people asking me questions so it’s quite nice to be turning the tables for once.’

The royal then asked if he was surprised people are still interested in his shows, which he started making 60 years ago.

‘That interest goes on and on and on. A five-year-old will turn over a stone and find a slug and find it amazing. If you lose that first wonder you have lost the greatest sources of pleasure of the whole of the wide world’.

Describing the changes in technology since he started working for the BBC he told William: ‘Around 50 or 60 years ago we would film something like an armadillo, which most people in Britain or indeed Europe had never seen.

‘It didn’t matter how amateurish it was – the viewer just saw an Arm and we were just astonished.

‘Now we can go everywhere – to the bottom of the sea or into space, slow things down, speed things up or film in the dark. We are doing things that 20 years ago nobody could ever imagine’.

The Prince asked his interviewee what he wanted to say to his generation.

The 92-year-old said: ‘In ordinary lives what I think of is not to waste the natural resources we rely on. Don’t throw away food or power. Just care for the world of which we are part’.

He added: ‘We are all one world and that’s what people need to recognise’. 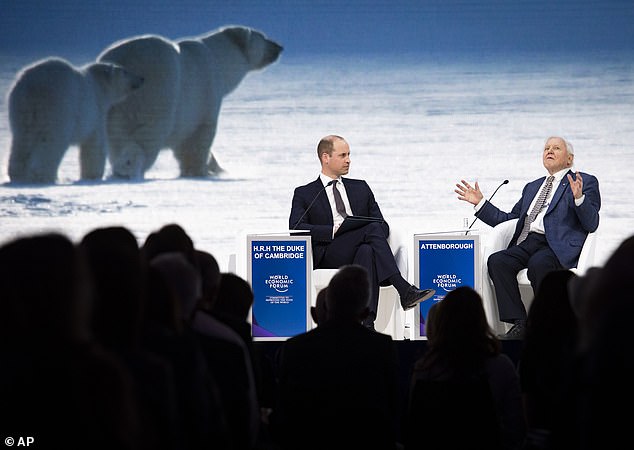 Sir David urged the billionaires and business and world leaders to care for the planet, warning it is being killed off 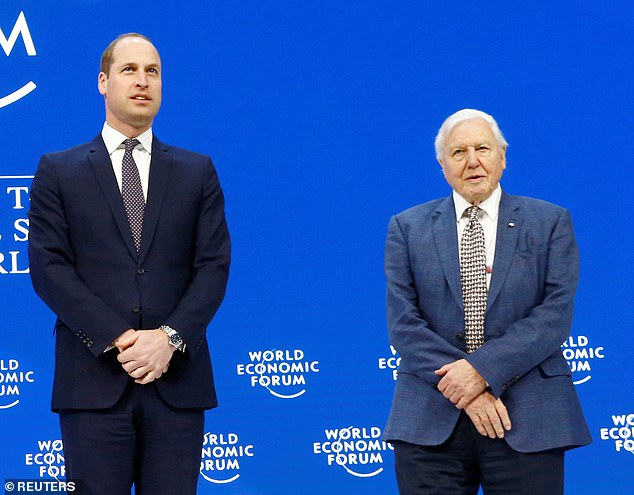 The Duke of Cambridge has described the Blue Planet and Dynasties narrator (pictured together today) as having ‘the single most important impact in my conservation thinking’.

The pair have met many times, and William invited him to Kensington Palace last week ahead of their on-stage conversation in Davos.

Sir David and the Queen have also developed a good relationship over the years.

The pair, who were born just weeks apart, chuckled over a forlorn-looking tree in the Buckingham Palace grounds which the Queen suggested had been ‘sat on’ at a garden party.

When Sir David suggested climate change might lead to ‘all kinds of different trees growing here in another 50 years’, the Queen quipped: ‘It might easily be, yes. I won’t be here though.’

The celebrated TV naturalist said yesterday the age of the ‘Garden of Eden’ is over and the world is on the brink of disaster due to climate change.

The 92-year-old said he was born in the so-called Holocene period, dating back to the last ice age when mild weather allowed human civilisation to flourish. 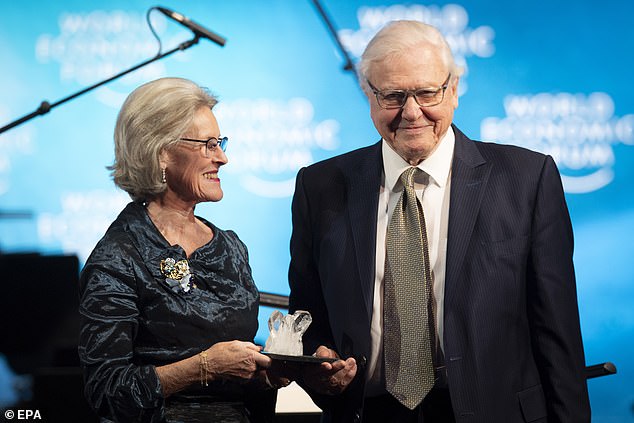 But since his early years, Sir David said, the world has been transformed by pollution and heavy industry and we are now in the Anthropocene era – Greek for the age of man.

Speaking he said: ‘I am quite literally from another age. I was born during the Holocene – the 12,000 year period of climatic stability that allowed humans to settle, farm, and create civilisations.

‘In the space of my lifetime, all that has changed.’ Sir David said the rise of the modern world means that urgent action is needed to protect the natural environment he has spent his life chronicling.

He warned that the world is on the brink of disaster, but is hopeful that human ingenuity can find solutions.

He said: ‘The Holocene has ended. The Garden of Eden is no more.

‘We have changed the world so much that scientists say we are in a new geological age.

‘We need to move beyond guilt or blame, and get on with the practical tasks at hand.’ Sir David added that he has been shocked by how fast the world has been transformed.

But he said that he remains optimistic for the future.

He said: ‘If people can truly understand what is at stake, I believe they will give permission for business and governments to get on with the practical solutions.

‘Over the next two years there will be United Nations decisions on climate change, sustainable development and a new deal for nature. Together these will form our species’ plan for a route through the Anthropocene.

‘What we do now, and in the next few years, will profoundly affect the next few thousand years.’ Attenborough was speaking at the so-called Crystal Awards in Davos, which honour celebrities who have made a difference to the world.