Princes George and Louis and Princess Charlotte have led hundreds of thousands of Britons in showing their appreciation for the NHS who are slaving away day and night to try to stem the number of deaths from the lethal coronavirus.

The Duke and Duchess of Cambridge shared a video on Instagram of the young Royals – six, four and one respectively – laughing and clapping together in a garden.

The post on Kensington Palace’s account read: ‘To all the doctors, nurses, carers, GPs, pharmacists, volunteers and other NHS staff working tirelessly to help those affected by #COVID19: thank you.’

People flocked to their doorways, balconies, gardens and windows to give a heartwarming round of applause and lit fireworks from 8pm as the country came together.

The London Eye, the Wembley Arch, the Royal Albert Hall, the Principality Stadium and Lincoln Cathedral were among the landmarks lit a vivid ‘NHS blue’ during the emotional salute. 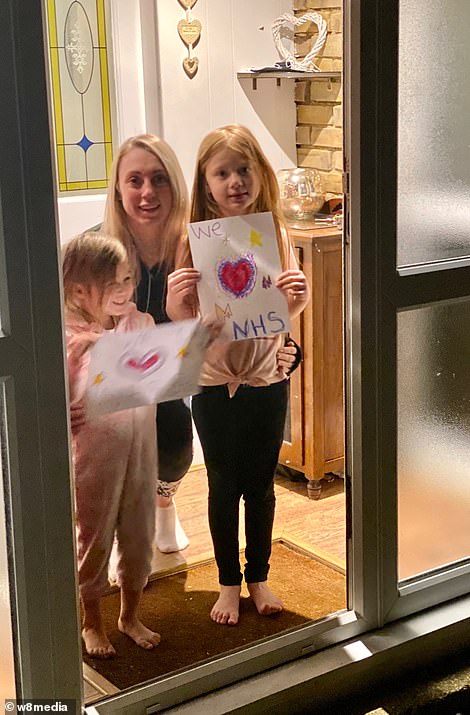 Left: Mel and Cody, Harriet and Lara clap for the NHS. Right: Leanne, Indie and ivy also took to their doorstep with homemade signs 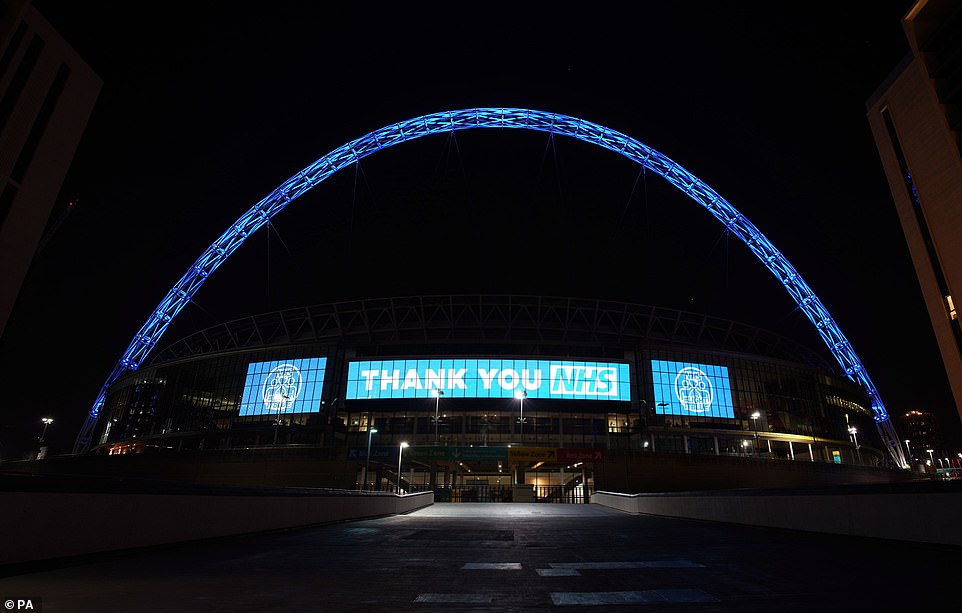 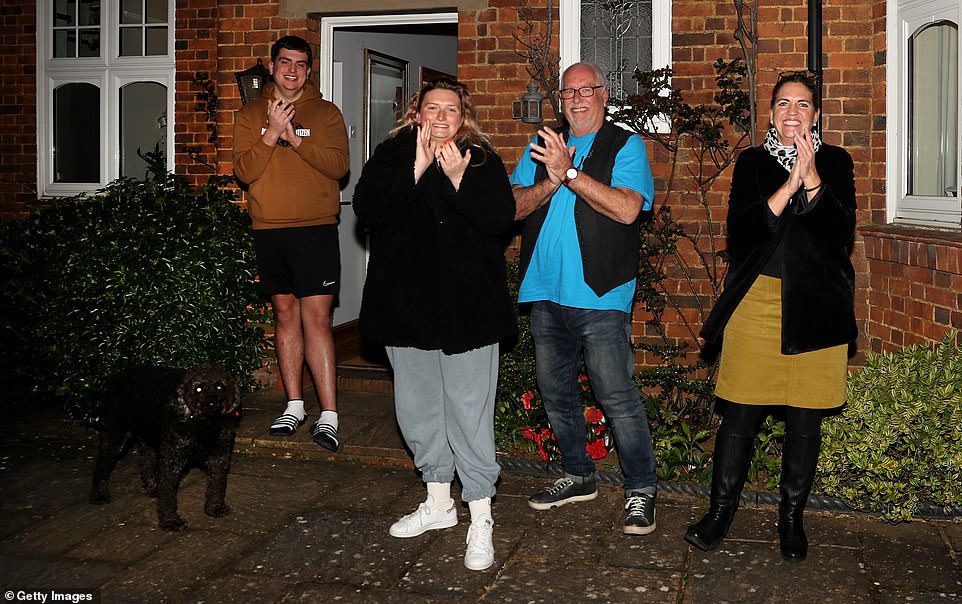 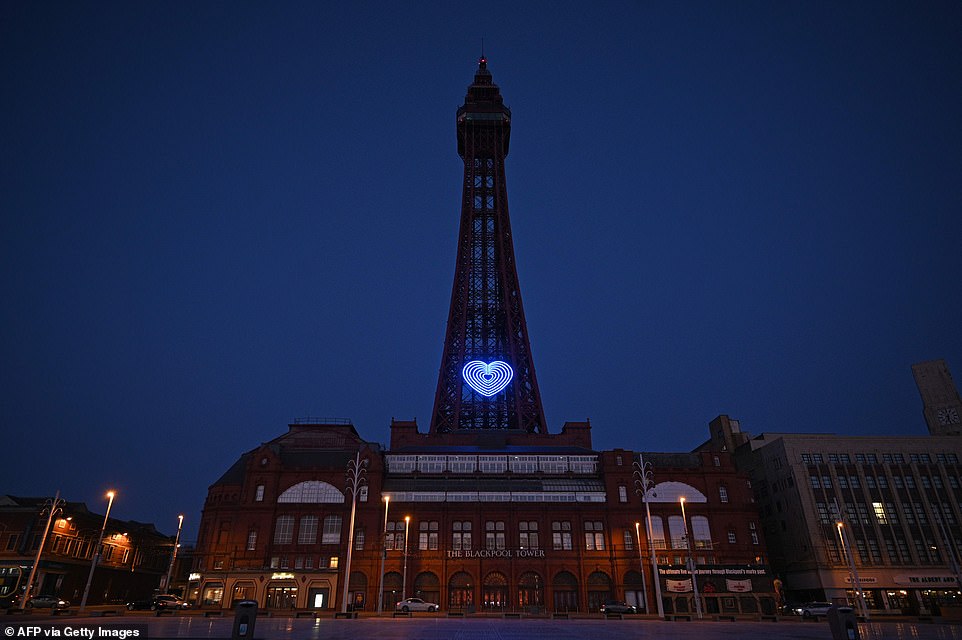 Britons flocked to their doorways, balconies, gardens and windows to give a heartwarming round of applause – which echoed across the nation from 8pm. Pictured: The Blackpool Tower shows solidarity tonight 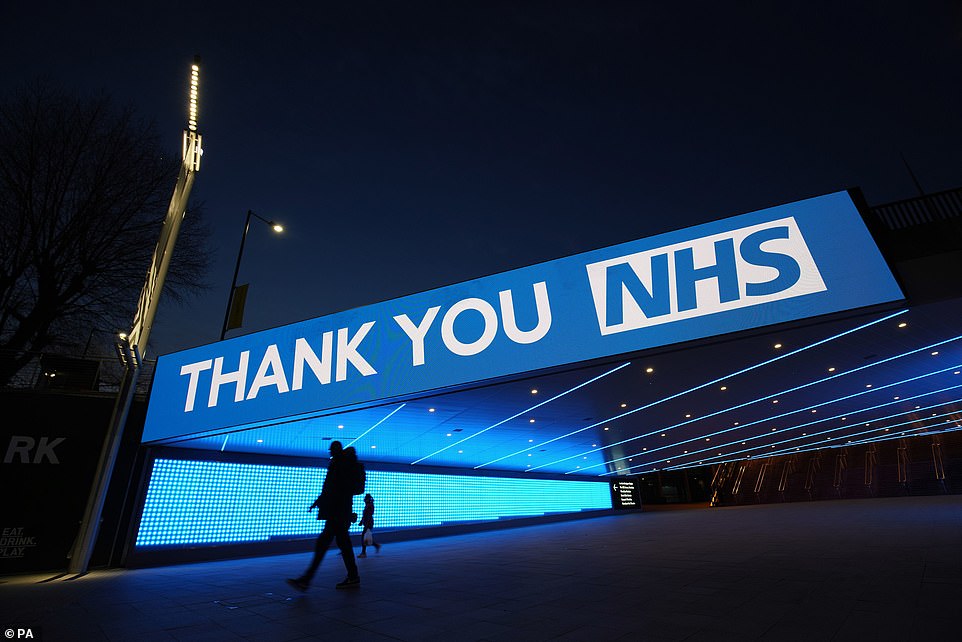 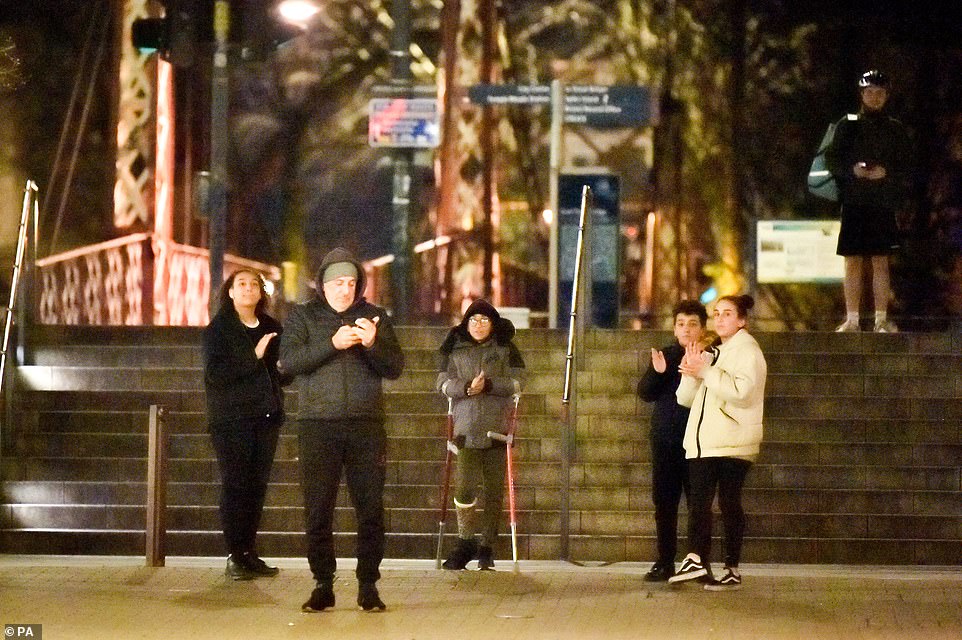 People pause in the street in Wapping Wharf, Bristol, to join in the incredible national applause for the NHS on Thursday night 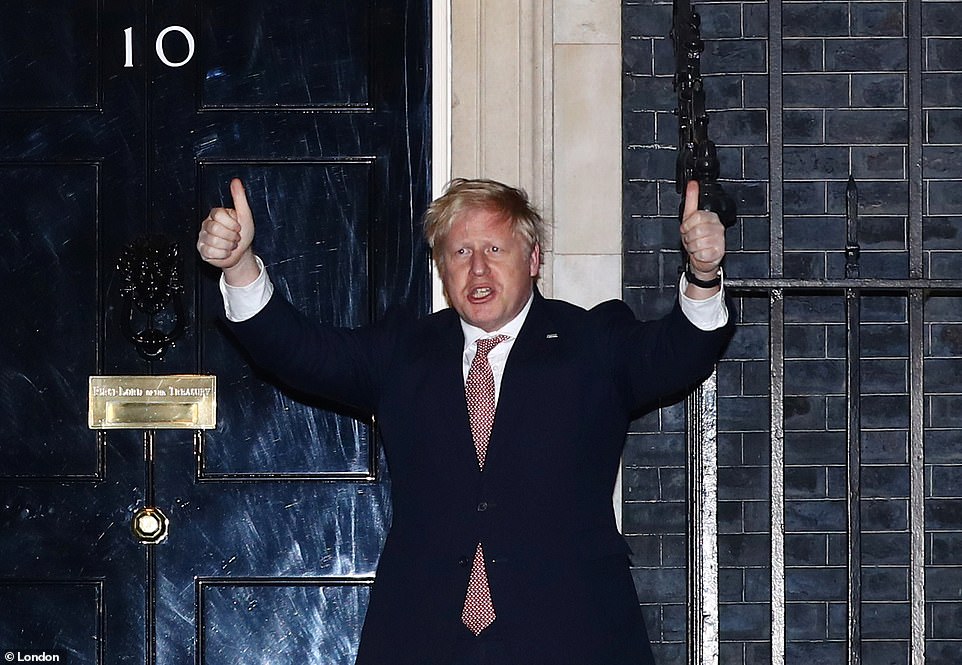 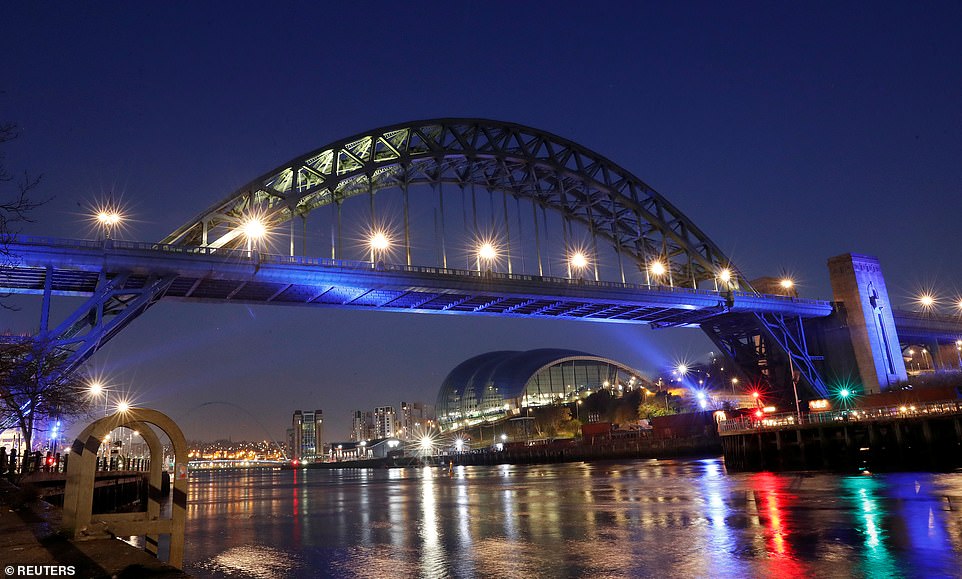 The London Eye, the Wembley Arch, the Royal Albert Hall, the Principality Stadium, Lincoln Cathedral and Tyne Bridge (pictured) are among the landmarks that will be lit ‘NHS blue’ during the emotional salute 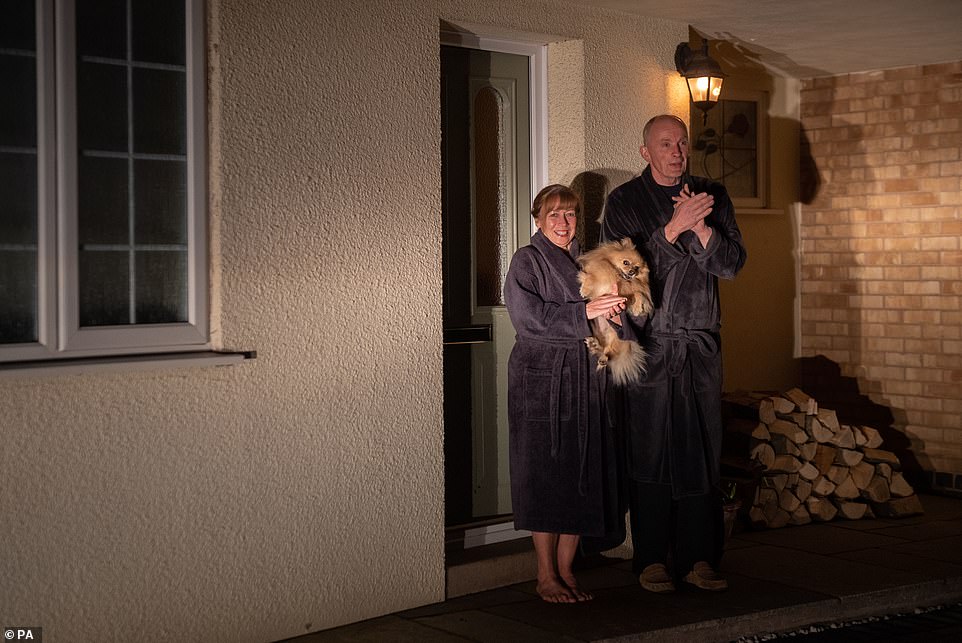 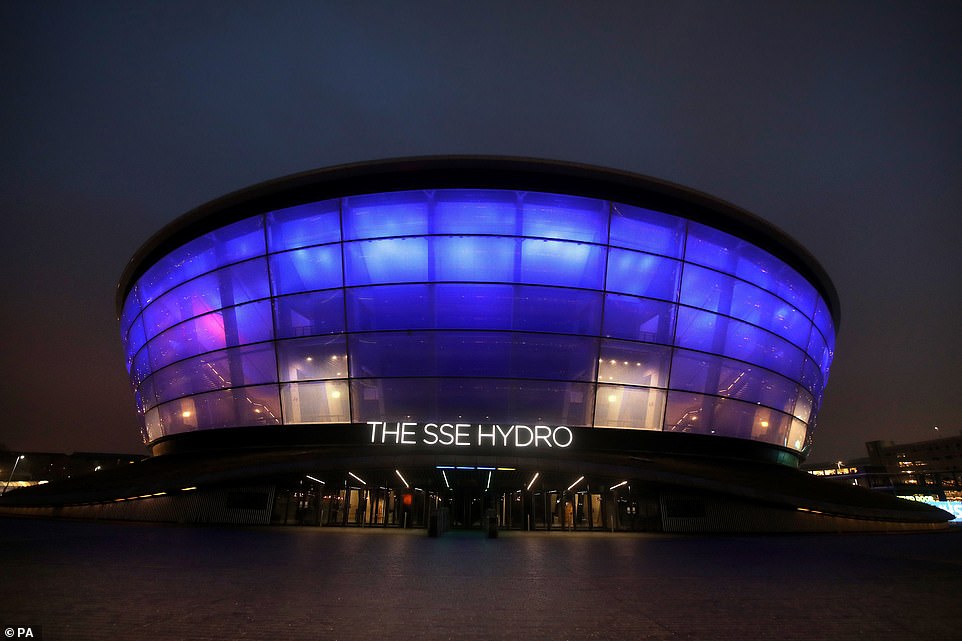 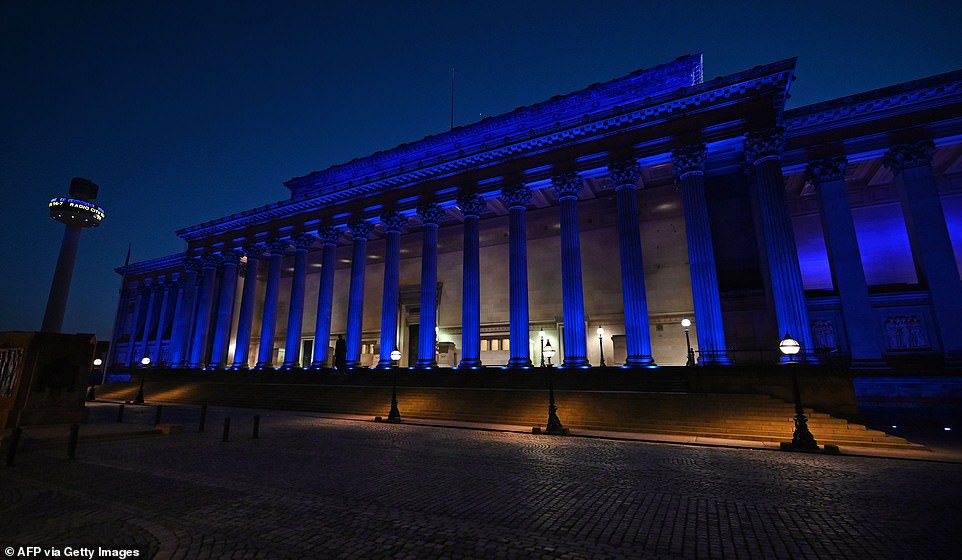 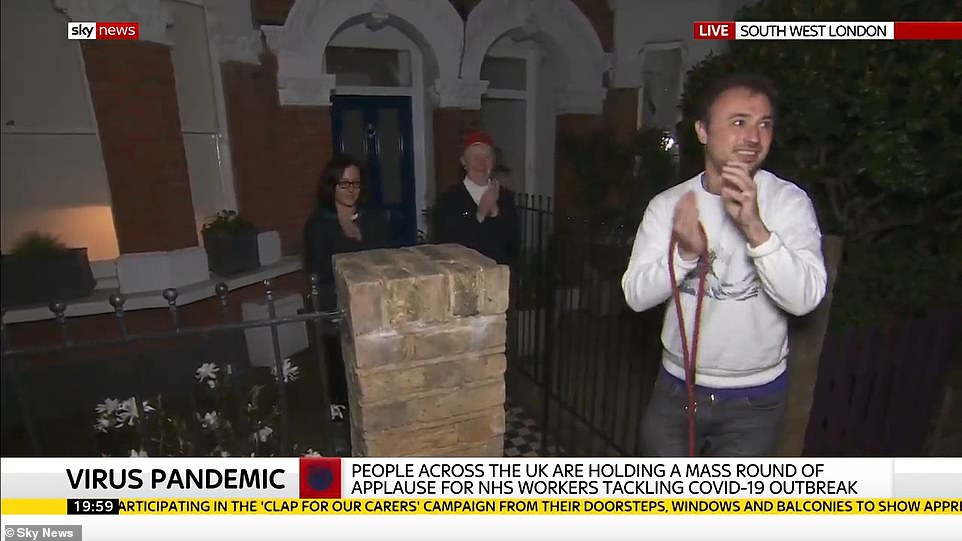 Droves of people left their homes for a few minutes to give a huge round of applause for our hard working NHS staff. Pictured: South wets London 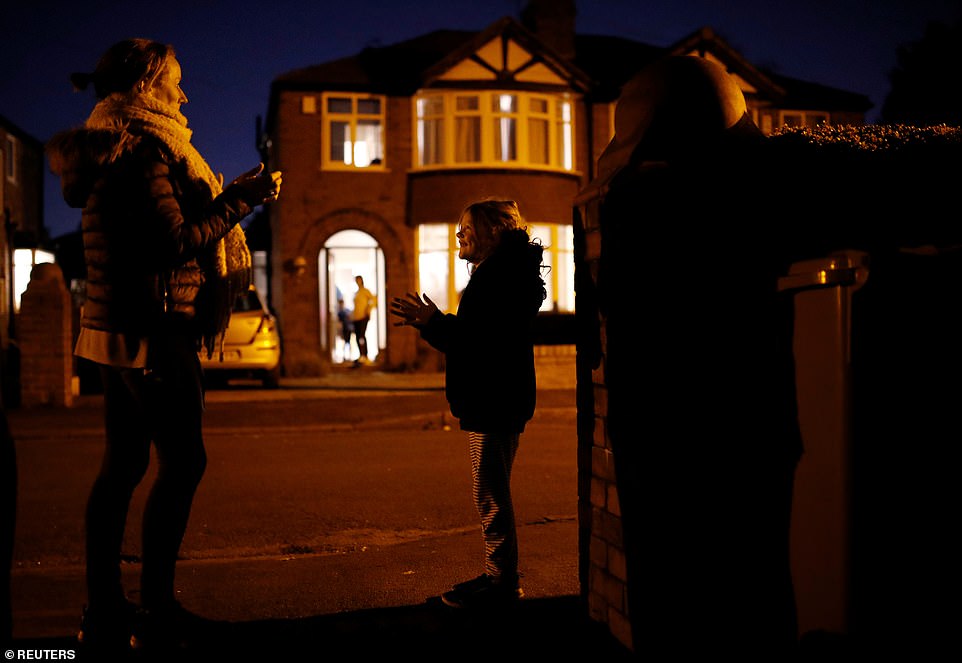 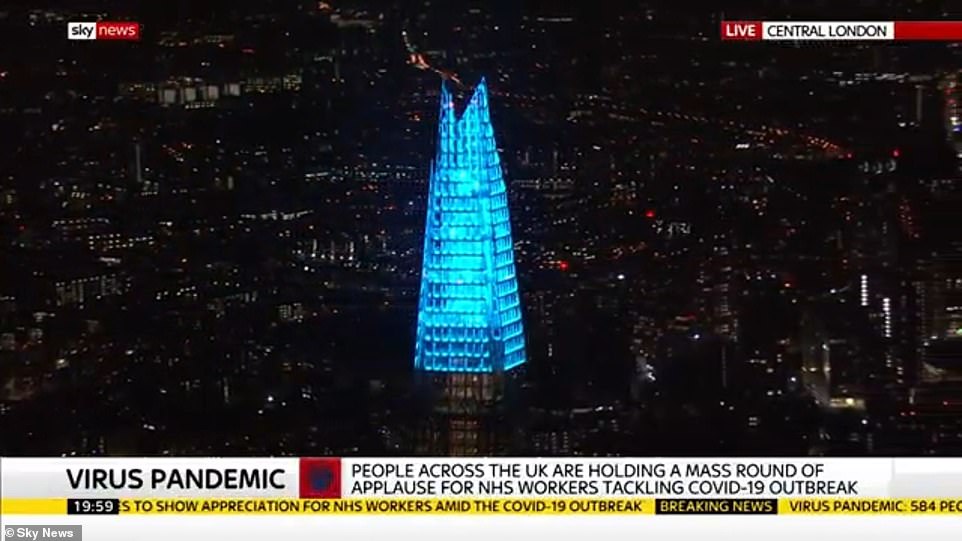 The Clap For Carers campaign, which started online, has been staged because ‘during these unprecedented times they need to know we are grateful’, the organisers said.

It follows similar moves in Italy and Spain – which have the world’s highest death tolls – which created astonishing scenes earlier this month as they applauded from terraces in the countries’ cities.

Chief nursing officer of the NHS Ruth May said she appreciated the national salute planned to honour NHS workers.

Ms May said: ‘Nurses and midwives in our care staff are working around the clock. They are working so hard. And I have a very huge personal thank you to make to them.

She said she felt ‘very humble, very proud, and a clap for our carers will mean so much for all of our NHS staff and social care teams as well. Thank you. I appreciate it.’ 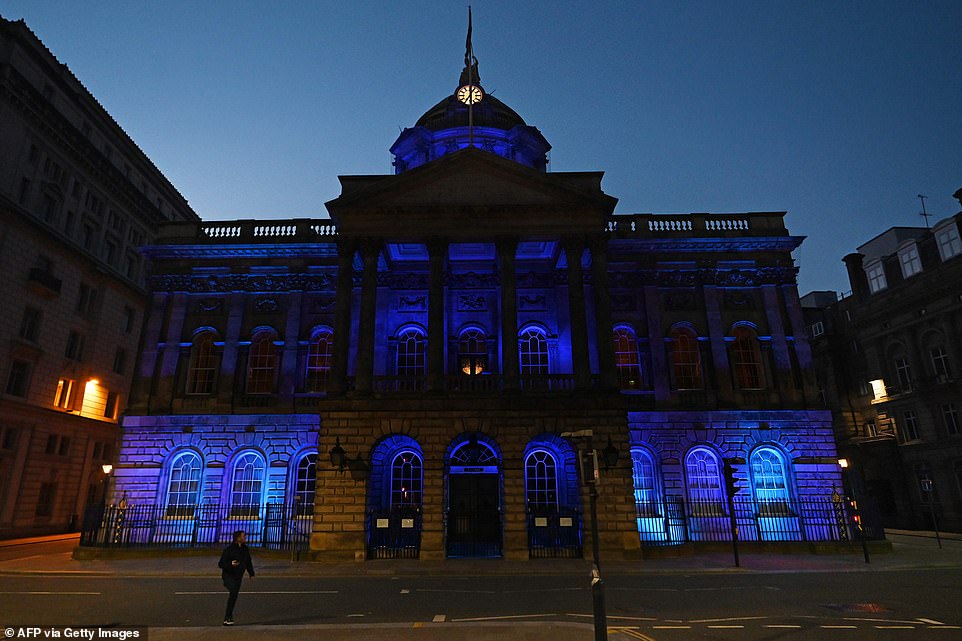 The Clap For Carers campaign, which started online, has been staged because ‘during these unprecedented times they need to know we are grateful’, the organisers said. Pictured: The Town Hall in Liverpool on Thursday night 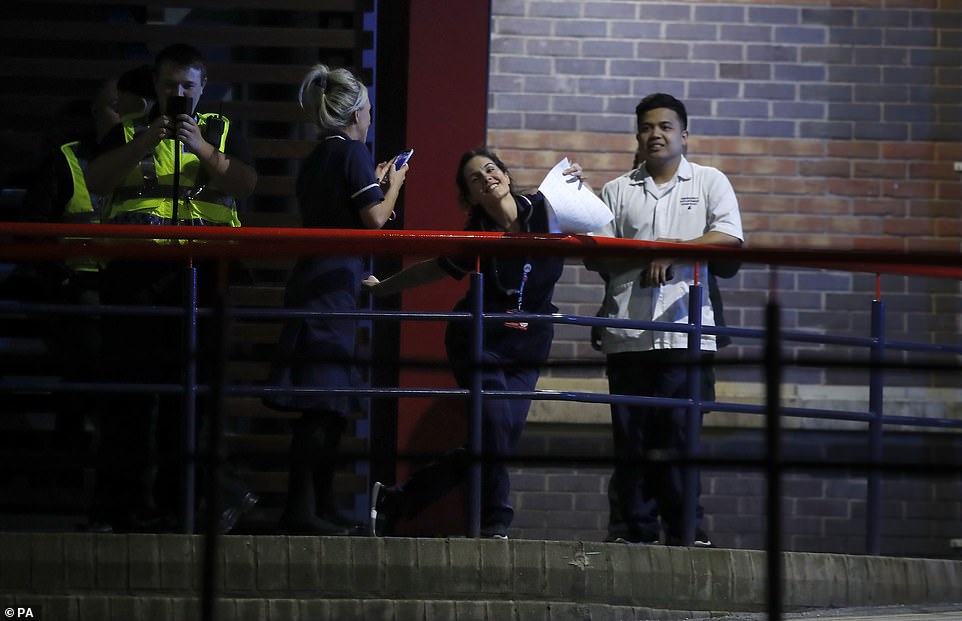 NHS staff respond as people in Blackpool join in a national applause for the NHS from their doorsteps, windows and balconies 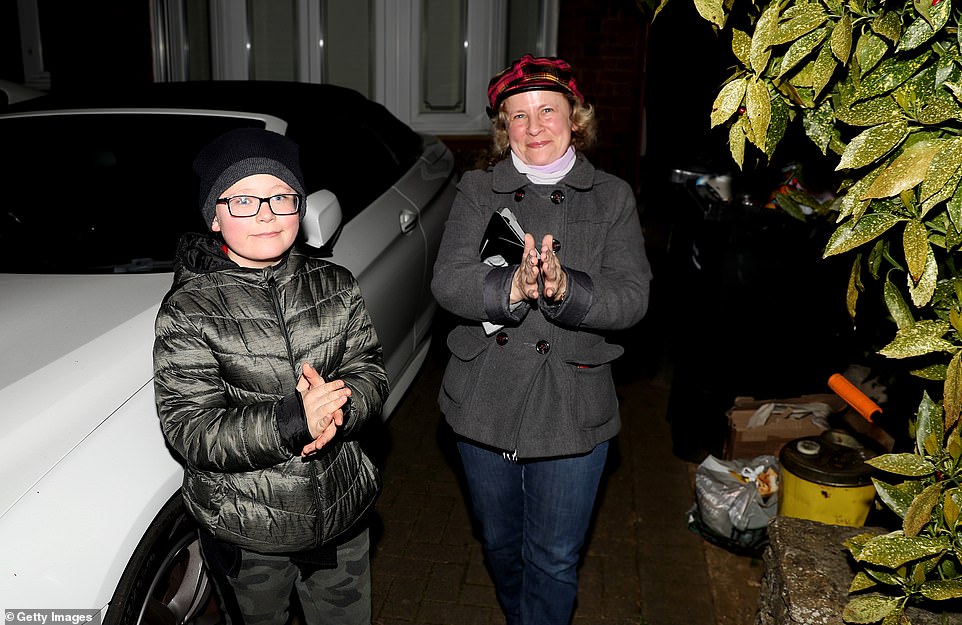 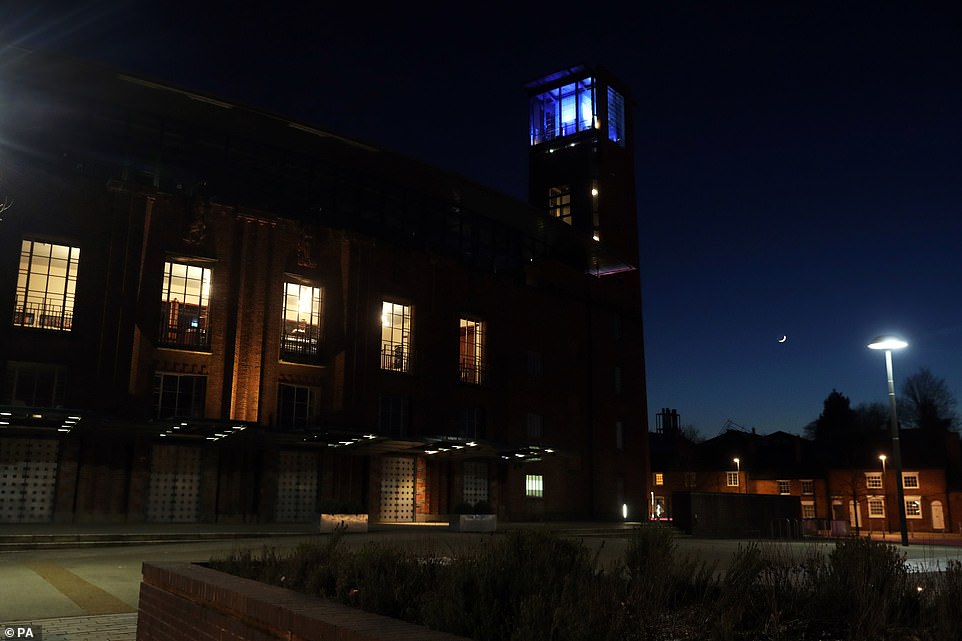 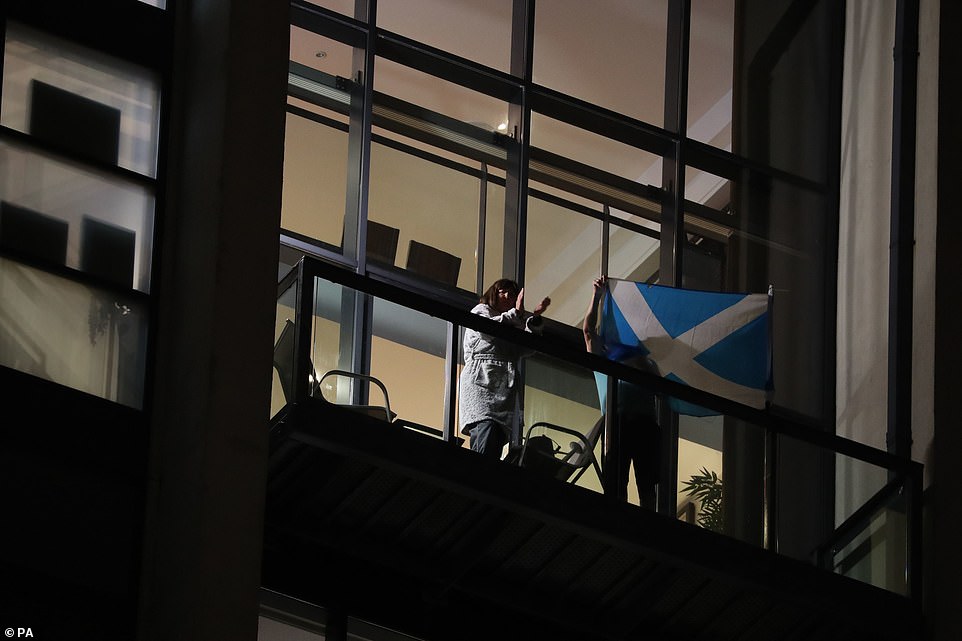 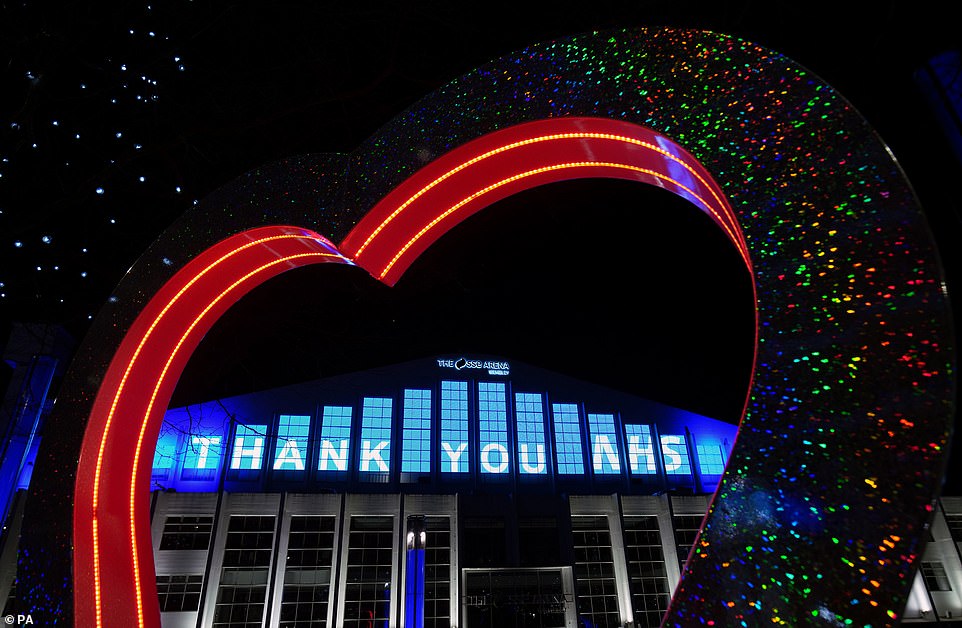 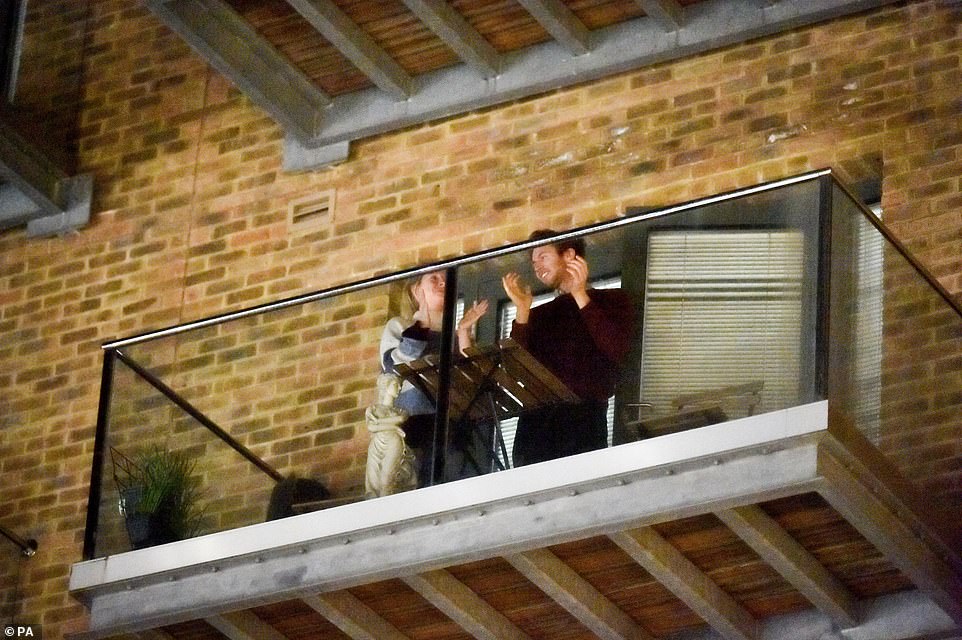 People in Wapping Wharf, Bristol, come out on to their balconies to join in the and smile as they clap our heroic NHS staff 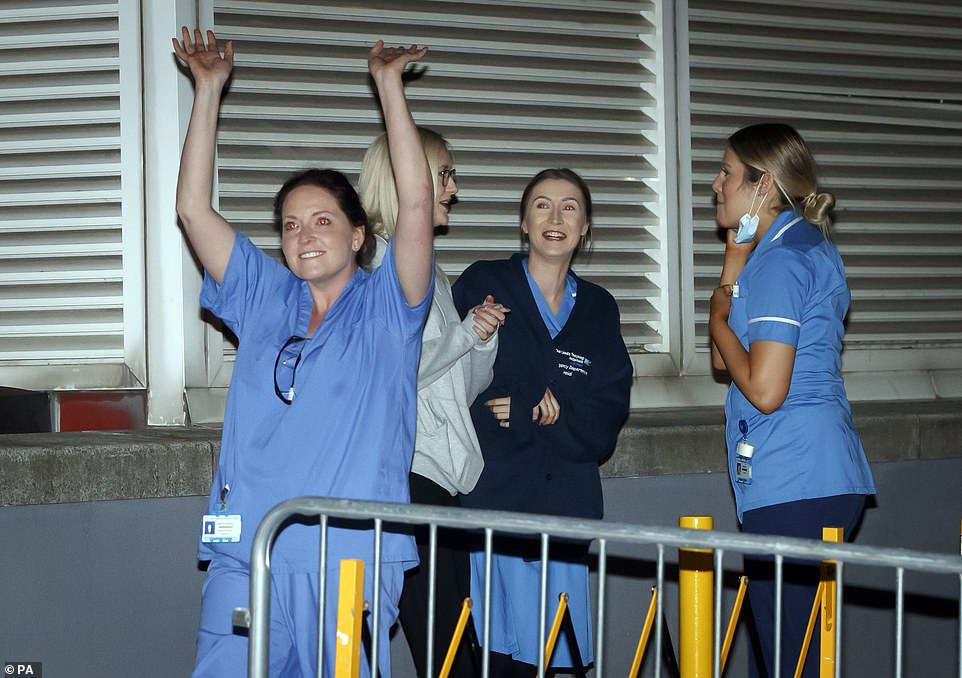 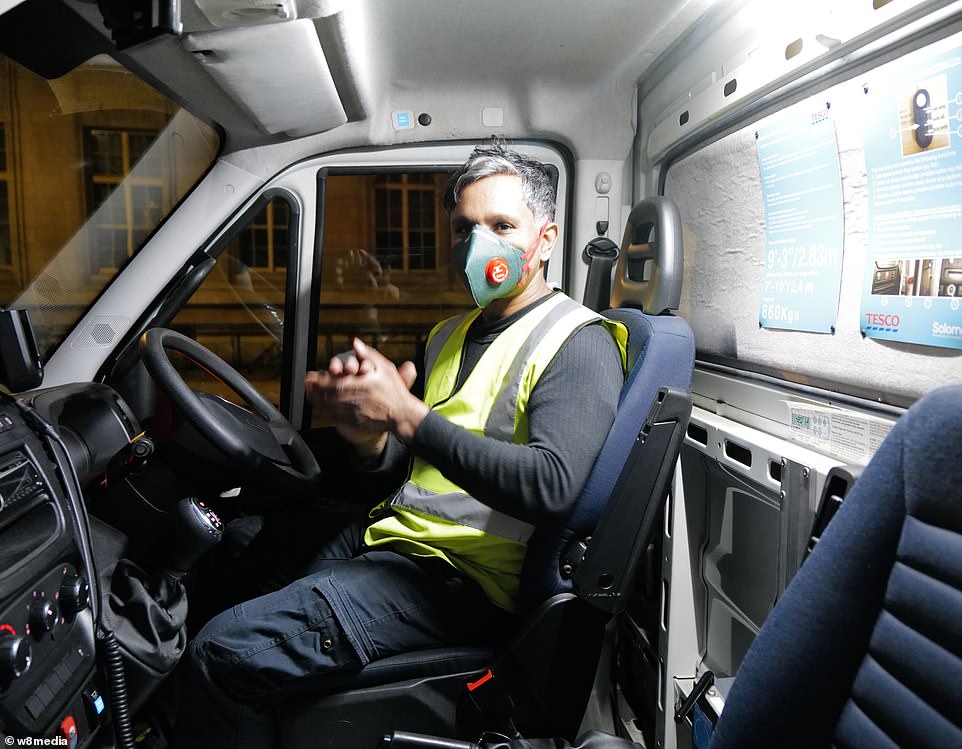 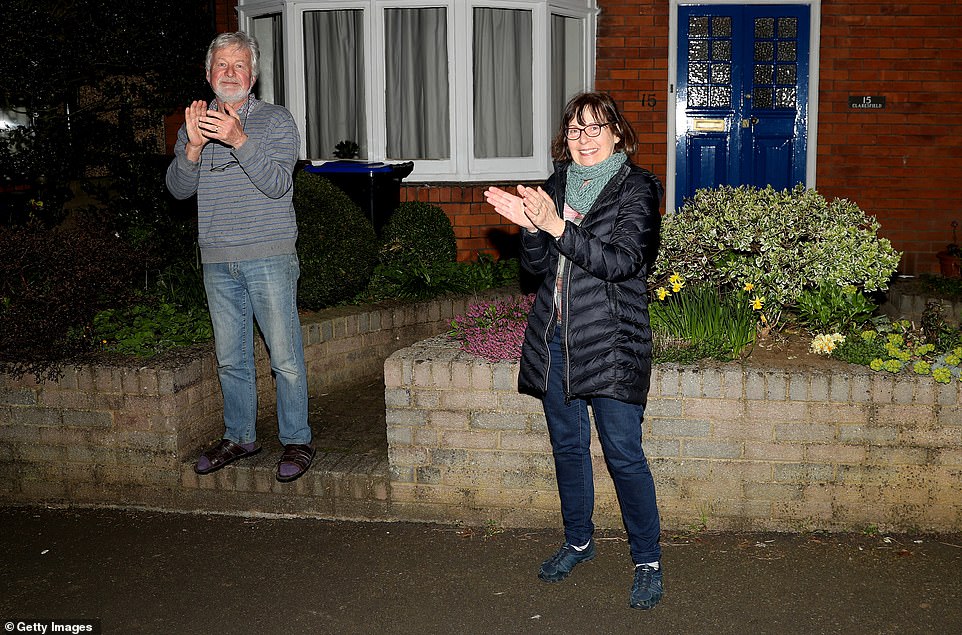 People in Northampton left their houses for a short while as they clapped the NHS. Britain is in lockdown and people have not been free to leave their homes under normal circumstances 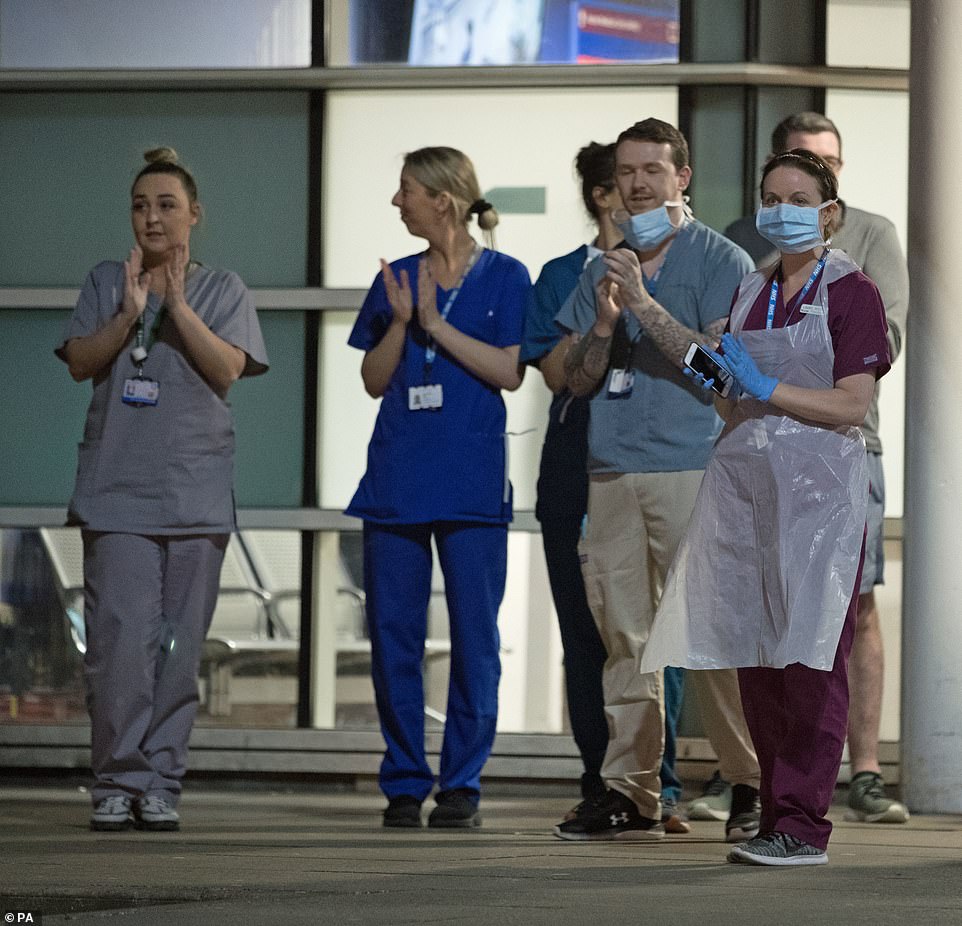 A London-based intensive care nurse added to MailOnline: ‘It’s such a nice appreciation for the staff and we really are thank for it. We all really appreciate it.

‘Nurses don’t want to be heroes, we don’t want to be that, we just want people to not be sick and not have to come into us. We don’t see ourselves as heroes, this is just what we do on a daily basis.’

Clap For Carers is part of the #lightitblue campaign which has been organised by members of the events and entertainment industry as a way to say thank you.

Piers Morgan, Chris Moyles and Kate Garraway were among the celebrity presenters who said they backed the event.

Radio X presenter Moyles rallied his listeners to ‘make some noise for the thousands and thousands of people [in the NHS] that we’ll probably never meet, just to say ‘thank you’ for everything they are doing for us’ with a powerful message. 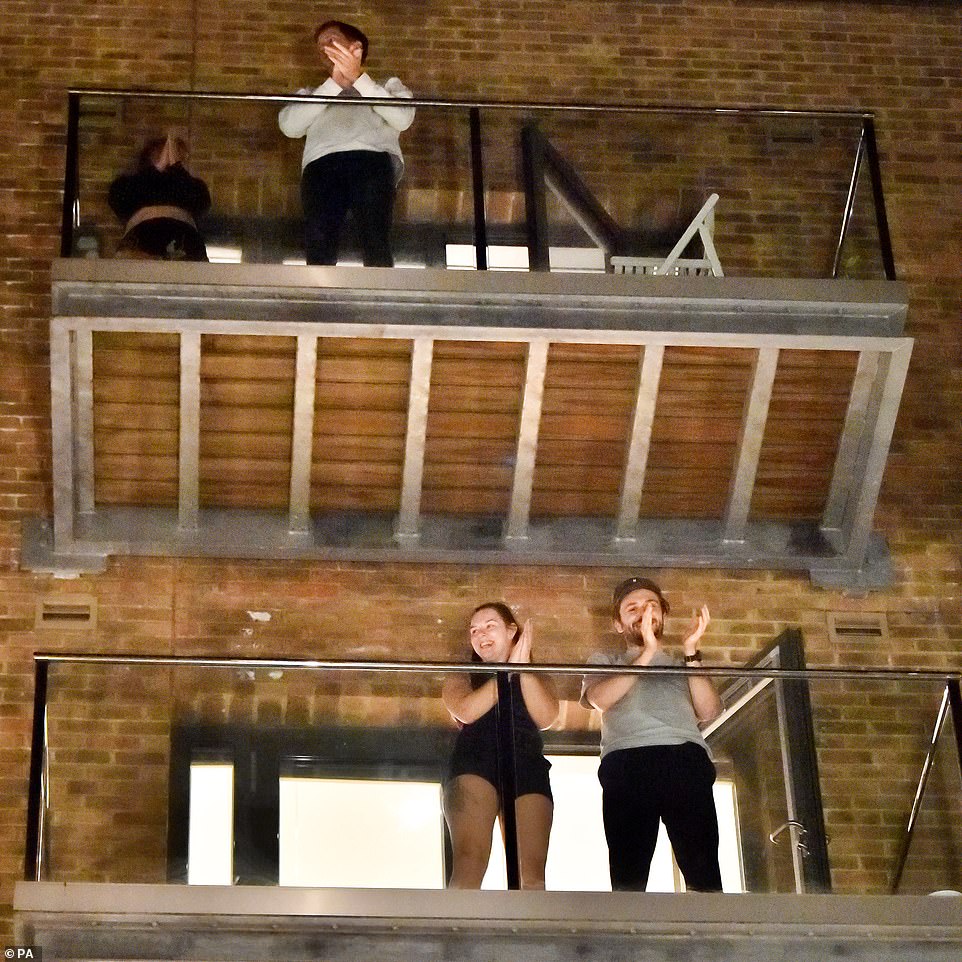 Britons living in Wapping Wharf, Bristol, come out on to their above and below balconies to join in the national applause tonight 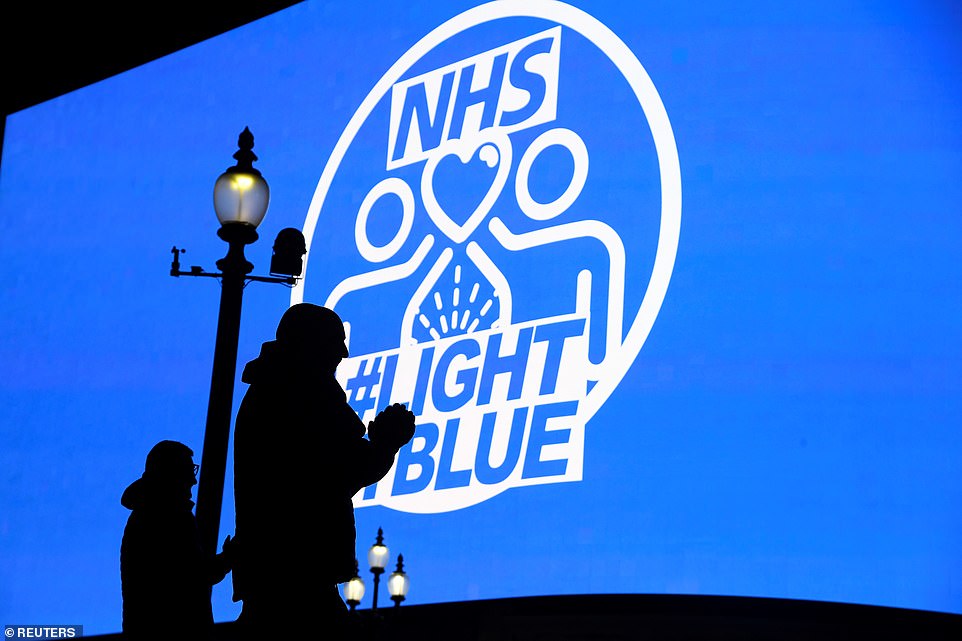 People applaud in front of big screen in Piccadilly Circus, central London. Gary White and Chuck Crampton, who jointly started the #lightitblue campaign, said all venues will use existing LED technology to create a flash of blue on facades and screens

Gary White and Chuck Crampton, who jointly started the #lightitblue campaign, said all venues will use existing LED technology to create a flash of blue on facades and screens.

It means people at different sites will be able to show their support while staying at home in line with current Government advice during the pandemic.

In a statement, they said: ‘The events and entertainment industry finds itself in an unprecedented state of enforced inaction.

‘The best thing we can do – apart from staying at home – is to use our skills and networks to say thank you to everyone who is supporting the NHS and risking their own health to help others during this pandemic.’

Health Secretary Matt Hancock said: ‘My colleagues in the NHS do so much to look after us, especially in our hour of need and never more so than during the coronavirus crisis, so let’s join together at 8pm tonight to say thank you to everyone in the NHS.’

ICU nurse, 28, ‘is told by health bosses to prepare her WILL’ before treating coronavirus victims 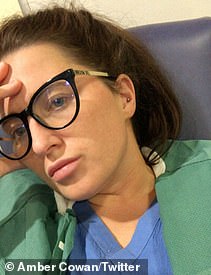 Amber Cowan, 28, works at a hospital in Glasgow and claims managers told her to get her will sorted

Amber Cowan, 28, works at a hospital in Glasgow and claims her managers told her to get her affairs in order before starting her first night shift on a COVID-19 ward.

She wrote on Twitter this week: ‘Getting told at 28 to make sure you have your pension and will sorted. First nightshift in intensive care and we are short staffed.’

Although it wasn’t official advice, another NHS doctor told MailOnline yesterday: ‘A friend who is 28 told me they had made their will.

‘I have heard people say, ‘I want to get coronavirus so that I will be immune.’ It doesn’t work like that.

‘If you do not take this seriously, you are condemning someone to potentially dying with a nurse they don’t know, because we are not allowing visitors in hospitals. That, or dying at home. That is the reality of it.’

The Mayor of London Sadiq Khan also recorded a video message and said he wanted to thank every person working in the NHS in London and around the country.

He added: ‘You truly are the best. Your hard work, dedication and courage is saving lives every single day and we need you now more than ever before. I urge everyone to join together and applaud for our NHS.’

Labour leader Jeremy Corbyn said: ‘I applaud the NHS, I clap for the NHS, I love the NHS. Well done everyone who works for the National Health Service and our care services and all the GP practices and everywhere else.

‘You’re doing a fantastic job and I think the whole country has begun to realise how much we rely on you and on each other to get through this particular crisis. Thanks a lot and well done.’

Terrified doctors and nurses have hit out at the Government for failing to provide them with enough gloves, masks, aprons and goggles amid the pandemic.

Britain’s death toll from the killer bug jumped to 578 after 113 more fatalities were confirmed across the home nations, making today the UK’s darkest day yet in the escalating outbreak.

The British Medical Association warned yesterday that NHS staff will die if they are not given sufficient protective clothing while they treat patients with the virus.

The doctors’ union slammed Public Health England for falling short of WHO guidelines. Medical staff in other countries are given full hazmat suits, but PHE experts say their is no evidence full bodysuits are needed.

A Department of Health and Social Care spokesman said: ‘We are working around the clock to give the social care sector and wider-NHS the equipment and support they need to tackle this outbreak.

‘We have delivered millions more items of personal protective equipment (PPE) for frontline staff at care homes, home care providers and hospices as well as to hospitals, ambulance trusts, GP practices and pharmacists.

‘The full weight of the Government is behind this effort and we are working closely with industry, social care providers, the NHS, and the army to ensure the right equipment continues to be delivered.’