Princess Anne has paid tribute to the five RNLI heroes who lost their lives in the Fraserburgh lifeboat disaster in Scotland 50 years ago.

The Princess Royal, 69, who was joined by her husband Tim Laurance, 64, greeted the crowds as she attended the memorial service for the men in Old Parish Church, Fraserburgh, Aberdeenshire, on January 19.

The tragic lifeboat disaster claimed the lives of five volunteers after their boat, the Duchess of Kent lifeboat, was capsized by 30ft waves in gale-force conditions while assisting a Danish fishing vessel.

Princess Anne (right), 69,  and her husband Tim Laurance (left), 64, attended the memorial service for the five men who died in the Fraserburgh lifeboat disaster in Scotland 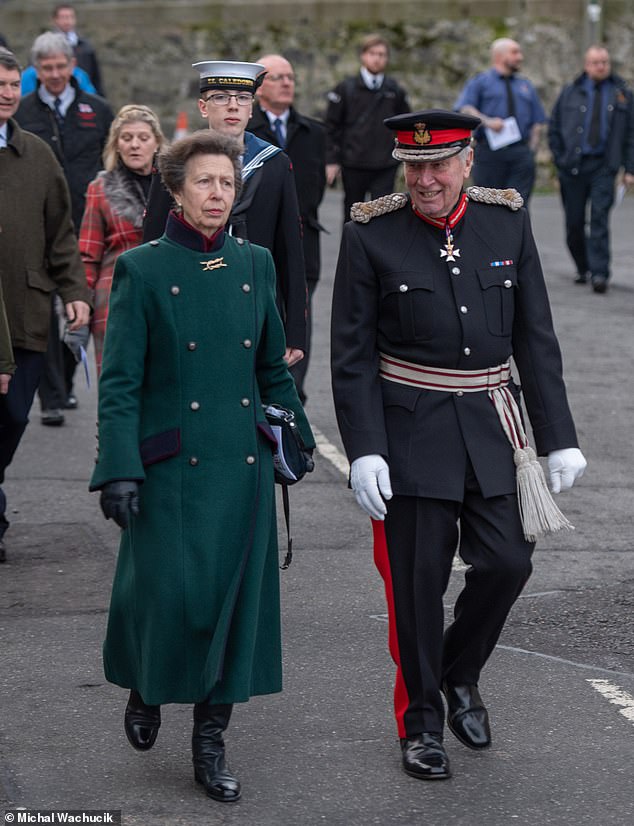 The royal made her way to the memorial service in Old Parish Church, Fraserburgh, Aberdeenshire, on January 19 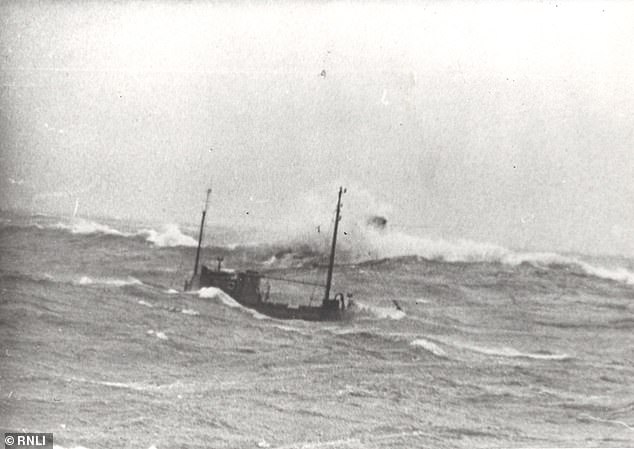 Pictured: The moment the Duchess of Kent lifeboat,was capsized by 30ft waves

The royal donned an elegant green coat, which featured a gold broach at the centre, and a pair of black boots as she made her way to the church that sits in the town centre and paid tribute to the volunteers.

The memorial also included a wreath laying ceremony at the statue in tribute to the men that stood outside Fraserburgh’s lifeboat station.

The tragedy, which took place on January 21, 1970, occurred when five of the six men inside the Duchess of Kent boat were hit by large waves while trying to tow a Danish vessel. 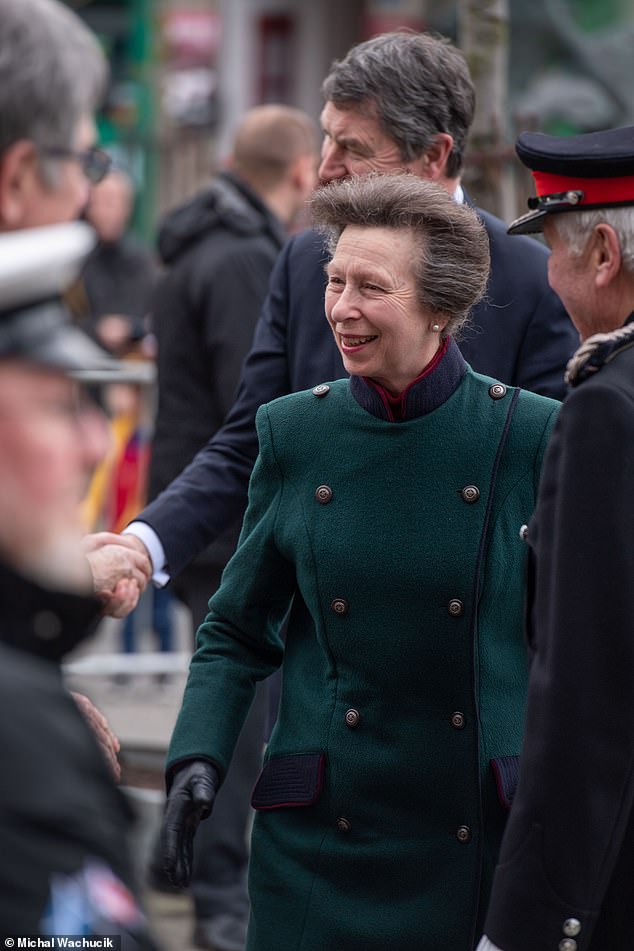 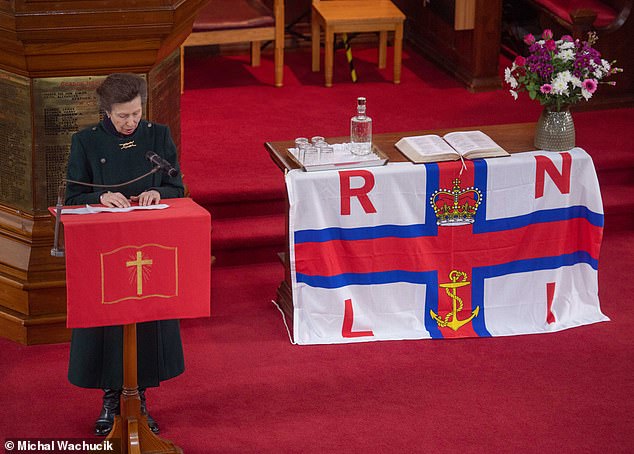 The Princess said a few words during the memorial service in Old Parish Church, Fraserburgh, Aberdeenshire

Mark Hadden, who lost his grandfather in the tragedy and is now a crew member of the Fraserburgh lifeboat said the volunteers died at sea should be ‘remembered for what they gave and sacrificed that day’.

He said: ‘These men were local Fraserburgh men. They went out in the most appalling weather conditions regardless of what could happen and what the outcome would be.

‘They went out to save the lives of others – and in doing so tragically, and selflessly, lost their own lives. Every one of those men should be remembered for what they gave and sacrificed that day.

‘I know that I will always remember what they gave, and I hope that we will always take the time to remember their sacrifice.’ 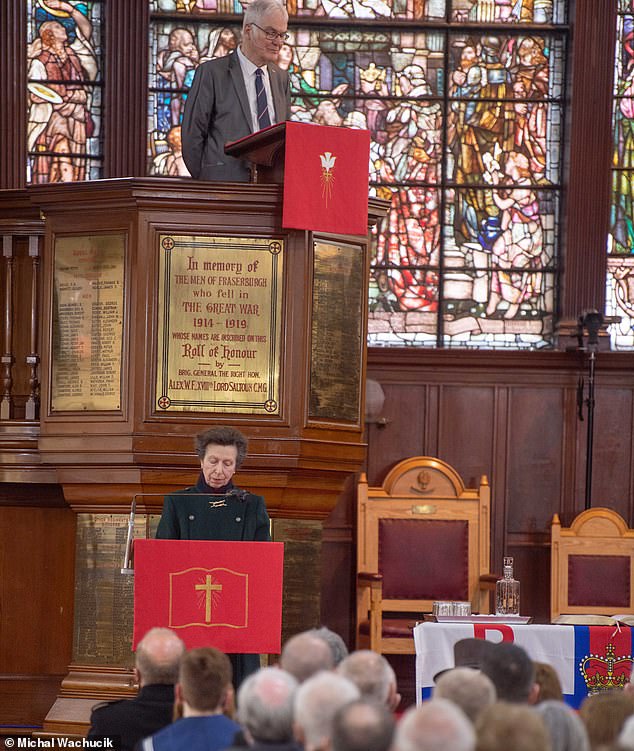 Princess Anne paid her respects to the five RNLI volunteers who died when their boat, the Duchess of Kent lifeboat, was capsized by 30ft waves in gale-force conditions

Princess Anne’s sighting comes days after she received an honorary degree at the University of Aberdeen in recognition of her extensive charity work.

The royal, who was given the degree by her sister-in-law, the Duchess of Cornwall, who is chancellor of the university, appeared in high spirits as she accepted the achievement.

Princess Anne, who began undertaking public engagements at the age of 18, is patron of Save the Children and is also involved with another 300 charities, organisations and military regiments in the UK and overseas. 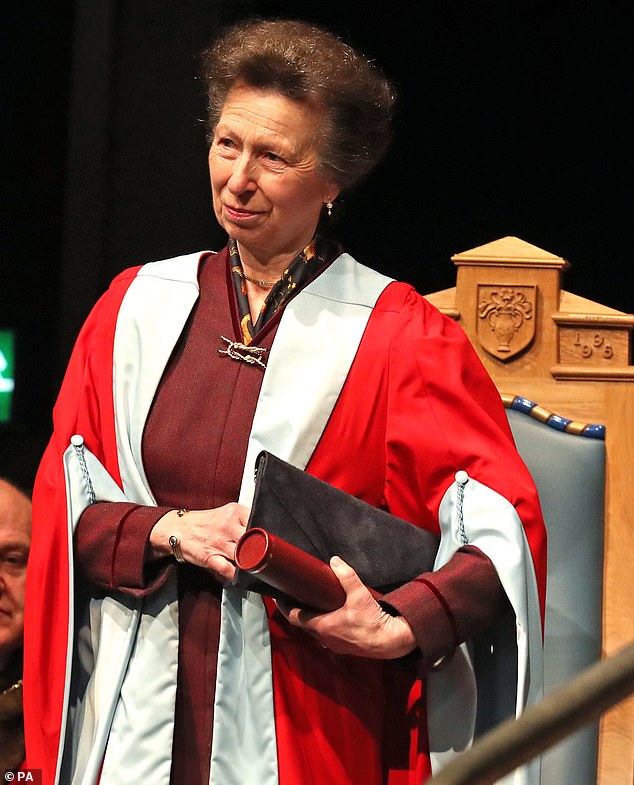