Vice Admiral Sir Timothy Laurence left a crowd in stitches yesterday after he compared standing in for his wife Princess Anne to ‘Mrs Harry Kane leading the England football team out’.

The 67-year-old attended the Founder’s Day Parade at Royal Hospital Chelsea yesterday while the Princess Royal carried out two other engagements – a reception at Kensington Palace for Save The Children in the afternoon and a Royal Society Club Dinner in the evening.

In a rare public speech, he made a series of jokes, saying: ‘Asking me to stand in for my wife at an event like this is a bit like asking Mrs Harry Kane to lead the England football team out.

‘Or, possibly, to take a penalty for England as her husband did the night before last.’ 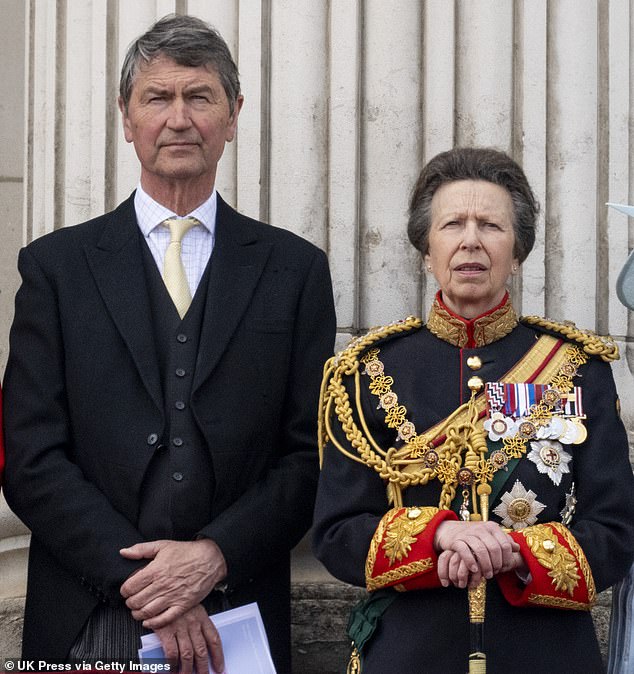 The 67-year-old, pictured with his wife at Trooping the Colour, made a series of jokes as he made the rare public speech

The royal continued: ‘I don’t know Mrs Kane, and for all I know she may well have a very strong right foot, but in any case I’m sure she’d do her best, and so will I.’

He then admitted that he is a fan of Tottenham Hotspur and added: ‘I know that’s a rather dangerous thing to say down here in Chelsea, so I may need an escort when I’m leaving.’

Royal expert, Victoria Arbiter, tweeted: ‘A dry and very witty open from Mr Princess Anne AKA Vice Admiral Sir Timothy Laurence… What a great sense of humour he has.’

Who is Harry Kane’s other half Katie? 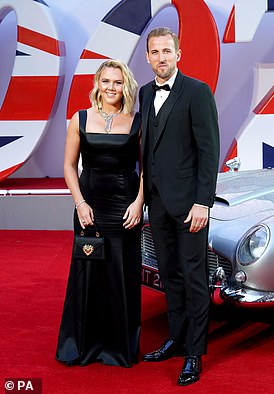 Behind every good man is a great woman, Harry Kane’s wife Katie Kane (nee Goodland) perhaps knows him better than anyone, for the pair first met at school and got engaged in 2017

Behind every good man is a great woman, Harry Kane’s wife Katie Kane (nee Goodland) perhaps knows him better than anyone, for the pair first met at school and got engaged in 2017.

Katie gave birth to the couple’s first child Ivy the same year, and has since welcomed daughter Vivienne and son Louis.

As the wife of the captain Katie has shunned the spotlight.

And others were equally amused by him, writing: ‘He seems so nice, very funny’ and another penned: ‘so cute.’

A separate Twitter user said: ‘This is what we need!!! More air time for the other members of the RF. They’re genuine, funny & sincere in their love of supporting HMTQ whilst highlighting brilliant charities that otherwise might not get traction. Well done Mr Royal, you did her proud!’

And a third very impressed commenter said: ‘How absolutely adorable and humourous.’

The annual Founder’s Day marks the founding of the Royal Hospital by King Charles II in 1681.

The famous London hospital is home to 300 military veterans who have served their country in some of the most dangerous conflicts in the world.

It is usually watched by hundreds lining the streets. The event has taken place almost every year since the Royal Hospital opened in 1692.

It is regularly attended by members of the Royal Family- one person usually goes to the ceremony every year.

The day is also known as Oak Apple Day because it commemorates the escape of the future King Charles II after the Battle of Worcester in 1651, when he hid in an oak to avoid capture by the Parliamentary forces.

Chelsea Pensioners wear oak leaves on their scarlet uniforms to commemorate him, and the statue of Charles II in the centre of figure court is also draped with the same decoration for the occasion.

Sir Tim is known to be a supportive husband to Anne, travelling with her to royal duties.

Recently, the 67-year-old went to Australia and Papua New Guinea with her.

His devotion to her work was rewarded by the Queen because he was allowed to stand on the Platinum Jubilee balcony with his wife and the rest of the royal family even though he is not a working member. 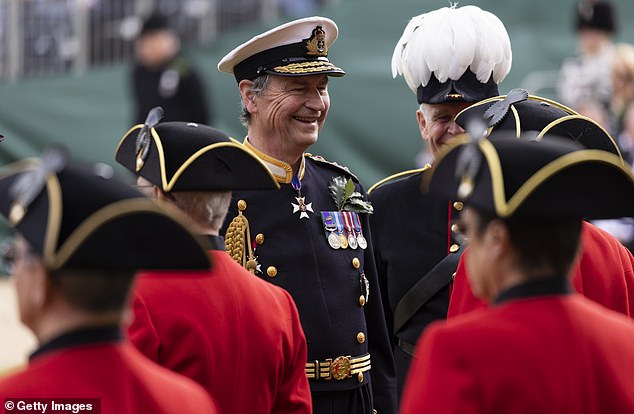 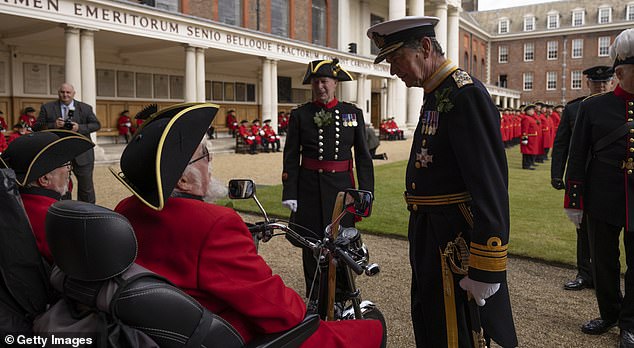 General attendance of the day, also called Oak Apple Day, is not possible and strictly by invitation only. Pictured is Sir Timothy Laurence speaking to members of the Chelsea Pensioners 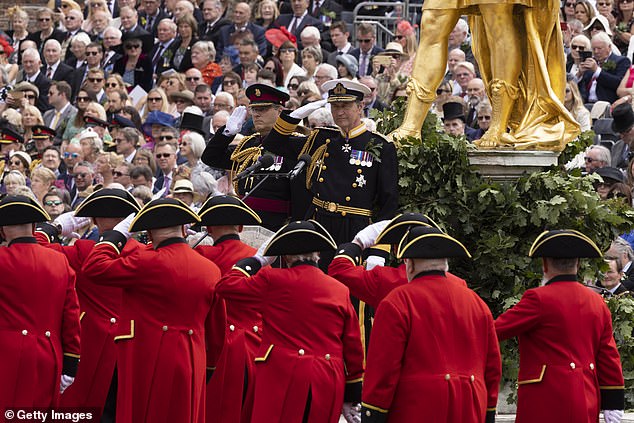 Chelsea Pensioners, here saluting Sir Timothy, wear oak leaves on their scarlet uniforms to commemorate him and the statue of Charles II in the centre of figure court is also draped with the same decoration for the occasion

He also joined Princess Anne in leading the royal family at the Epsom races on the third day of the Platinum Jubilee last weekend.

The Queen watched the Epsom Derby Day at home on the sofa in her ‘comfy clothes’ Zara Tindall revealed this afternoon, as Princess Anne stood in for the monarch alongside her family.

The Princess Royal was grinning from ear to ear at Epsom Racecourse as she and her family enjoyed the racing at Derby Day to stand in for Her Majesty the Queen who was forced to pull out of one of her favourite events of the year.

Watching on from the stands was Princess Anne with her husband Sir Timothy Laurence, daughter Zara Tindall and husband Mike, as well as Peter Phillips who was in attendance with girlfriend Lindsay Wallace, the daughter of an oil tycoon. 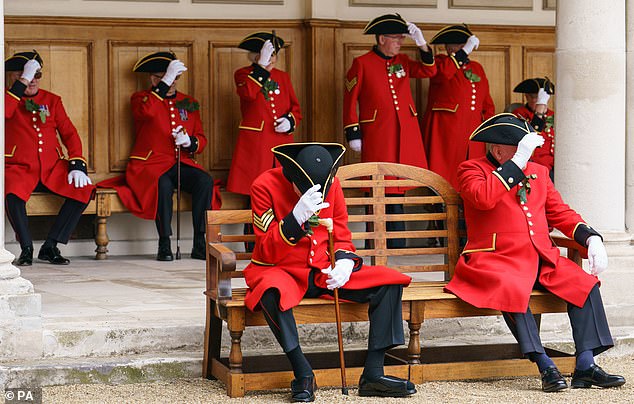 Speaking at the major sporting event, Zara Tindall, the Queen’s granddaughter, spoke of Her Majesty earlier today: ‘She will be watching on the TV – she has a few runners today dotted around the country, so she knows exactly what’s going on.

‘She’ll just be sat on the sofa watching the TV. She’ll be in her comfy clothes.’

Asked about the royal procession arriving through a guard of honour of 40 of the Queen’s past and present jockeys, Zara added: ‘It was amazing. It was so nice to see so many faces. It was funny seeing them trying to fit back into the colours again, all the retired ones. 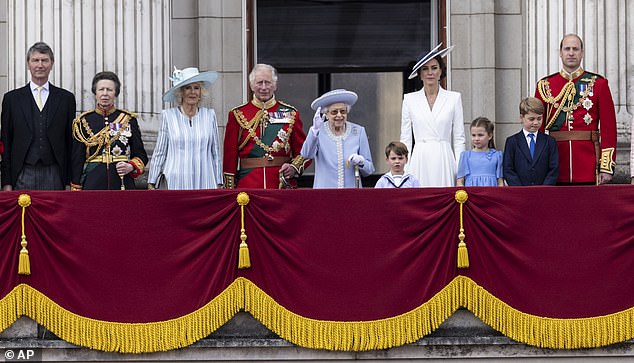 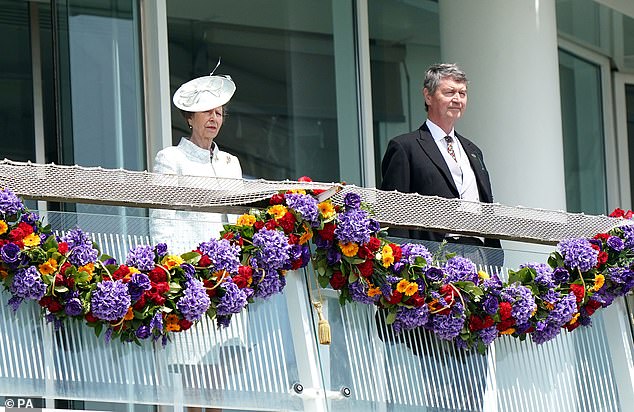 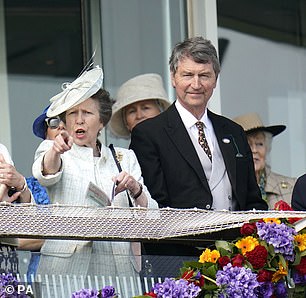 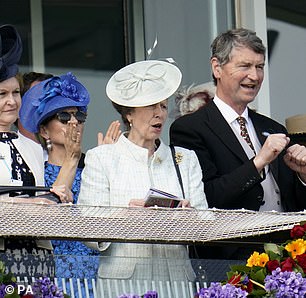 The Princess Royal, pictured centre next to her husband, Sir Timothy Laurence, right, watches the Cazoo Derby race at Epsom 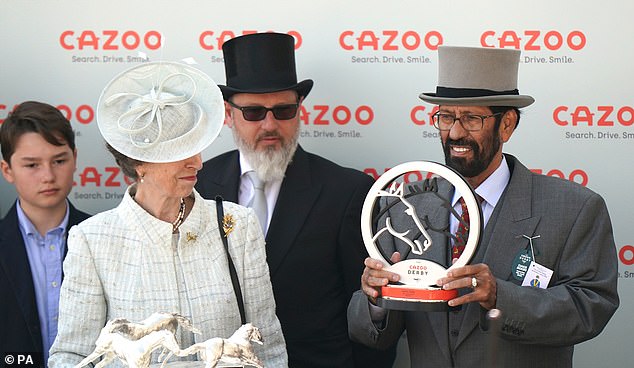 ‘Obviously, we’d love her [The Queen] to be here. But it’s nice to be here. I’ve never been to Epsom before. It’s exciting. I need to go and explore.’

The monarch, who is said to be ‘fine’ despite the announcement on Friday that she was to pull out of one of her favourite events, watched the Epsom Derby Day on television from Windsor Castle this afternoon.

Her Majesty has been sent a souvenir race card to follow the action from home.

Representing the Queen in her absence was Anne, Princess Royal, who has arrived at Epsom alongside her husband Vice Admiral Sir Tim Laurence shortly before 1pm today.