Princess Beatrice and Edo Mapelli Mozzi cut a glamourous look as they attended a preview of the equestrian extravaganza that will be shown during the Queen’s Platinum Jubilee.

The 33-year-old royal and her husband, 38, headed out to the Royal Windsor Horse Show, where they were treated to a preview of A Gallop Through History, which will take place during the Queen’s Jubilee celebrations in early June.

For the occasion, mother-of-one Bea picked a very stylish maxi dress from the trendy designer The Vampire’s Wife with a vibrant liberty print.

The Royal Windsor Horse Show, which kicked off last night and will run until Sunday, is the Queen’s favourite event of the year, butit was announced the 96-year-old Monarch would not attend this year due to mobility issues.

The couple, who reportedly baptised their daughter Sienna in early May, left the eight-months-old at home to represent the sovereign.

Princess Beatrice, 33 and her husband Edo Mapelli Mozzi, 38, made a glamourous pair as they attended a preview of the show, which will air during the Queen’s Platinum Jubilee celebrations 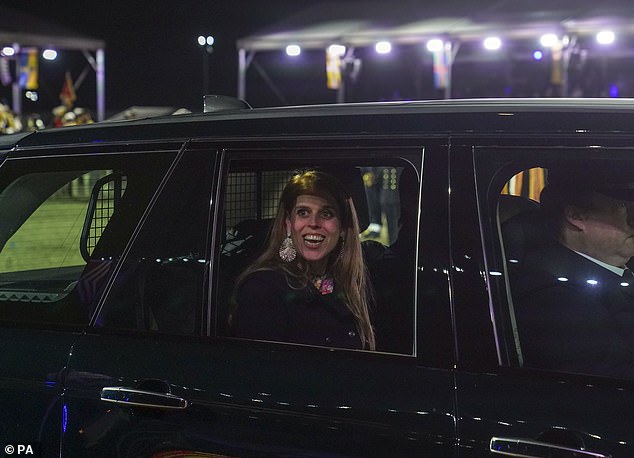 Beatrice put on a very glamourous display in the colourful gown, which reached to the floor with a tiered train and highlighted her petite waist.

She paired it with platform heels and kept the rest of the look discreet.

Jewellery-wise, she opted for a silver bracelet and a gold bracelet on each wrist, and statement dropped earrings in silver shaped like feathers.

The mother-of-one sported a glamourous makeup, with a trait of eyeliner circling her blue eyes and mascara adding volume to her lashes.

She completed the look with a healthy dose of bronzer and a pink lipstick.

Meanwhile, Edo looked dapper in a black velvet blazer, which he wore over a white shirt and a black bow tie.

The couple looked relaxed as they arrived at the show and seemed to be enjoying their time out.

Beatrice looked like she enjoyed the preview of the show created in honour of her grandmother. She was seen waving enthusiastically from her car at the end of the evening.

This outing comes as it was revealed that Beatrice and Edo as well as Princess Eugenie, 32, and her husband Jack Brooskbank, along with several other royals, won’t make an appearance on the balcony of Buckingham Palace during the Queen’s Jubilee celebrations. 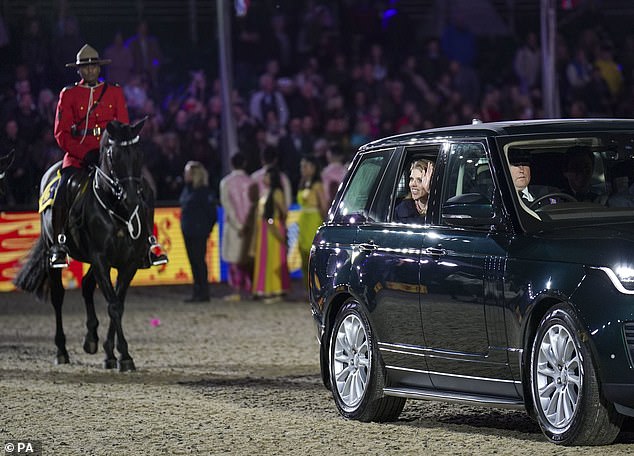 The balcony appearance, which is often seen as the centrepiece of major royal occasions, including Trooping the Colour and weddings, usually sees the Queen’s extended family gather to watch a flypast and is a rare chance for fans to see the entire extended family together.

Following his ejection from public life, after settling a civil court case in America over allegations of sexual abuse against Virginia Giuffre (which he vehemently denies), it was inconceivable that Beatrice and Eugenie’s father Prince Andrew would be given a spot.

Despite earlier claims that the Queen offered Prince Harry and Meghan Markle a space on the platform, they too have been left off the list, although they quickly announced today that they will be in London for the celebrations with their two children. 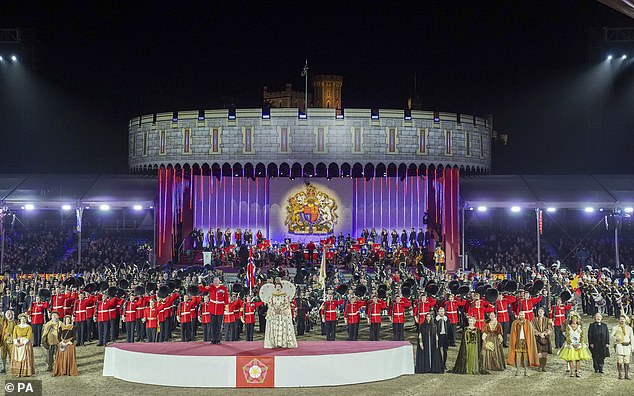 The cast of the show, which includes 1,000 performers, conducted three cheers to Princess Beatrice during the charity preview

However, in paring the list down to just 16 people to avoid potential diplomatic pitfalls, the Queen has been forced to omit a number of well-liked family members including her much-loved grandchildren and their families.

Her cousins, including Prince Michael of Kent, and their families, with whom the Queen enjoys a warm relationship are also out in the cold, with a total of at least 34 royals absent from the balcony.

The Queen’s other adult grandchildren, Peter Philips and Zara Tindall have been excluded with their families, even though their mother Princess Anne and stepfather Sir Timothy Laurence will join the Queen.

In a formal statement about the decision, Buckingham Palace said: ‘After careful consideration, The Queen has decided this year’s traditional Trooping the Colour balcony appearance on Thursday 2nd June will be limited to Her Majesty and those Members of the Royal Family who are currently undertaking official public duties on behalf of The Queen.’ 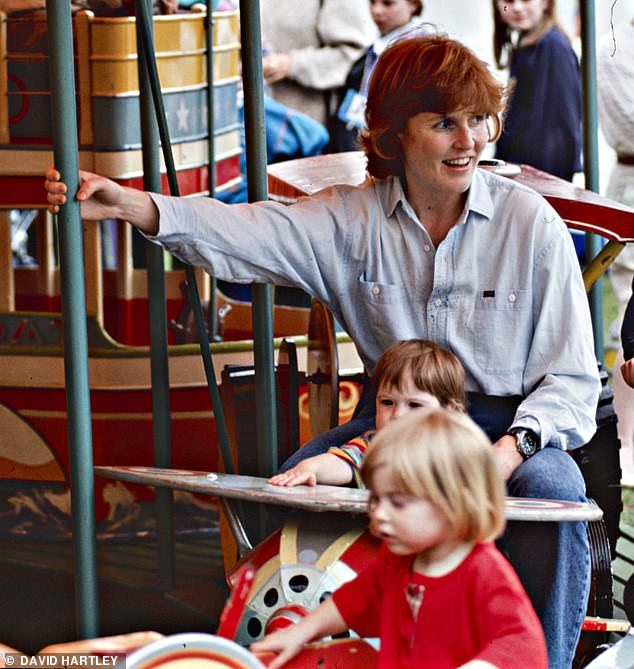 As a child, Princess Beatrice and her sister Princess Eugenie attended the Royal Windsor Horse Show with their mother Sarah Ferguson

There are exceptions, however. Prince Anne’s husband Vice Admiral Sir Tim Laurence, who is not a working royal, and the Queen’s granchildren Lady Louise and James, Viscount Severn, and her great-grandchildren George, Charlotte and Louis are included.

The Palace spokesman added: ‘The Cambridge and Wessex children are also expected to appear as is Sir Tim Laurence, who the Queen is happy to attend as a frequent attendee and support for the Princess Royal on official engagements.’

The announcement follows reports that her Majesty herself may not appear on the balcony, due to the 96-year-old’s limited mobility.

It is believed that aides are working on a ‘plan B’, with an insider saying: ‘It could still happen but it is by no means guaranteed that we will see the Queen on the balcony during the Jubilee.’

While recent balcony appearances have been more focused on senior members of the Firm, normally, there are no restrictions on which family members are present for Trooping of the Colour, the Queen’s official birthday.