Princess Beatrice avoids being pictured with her new beau

Princess Beatrice is clearly not ready to go public with her new boyfriend, Edoardo Mapelli Mozzi, just yet.

However, when the pair eventually left in the early hours, they were careful to stagger their exits so they could not be pictured getting into the same Range Rover together.

Beatrice, 30, is understood to have met the 35-year-old property tycoon, known as Edo, at her younger sister Princess Eugenie’s wedding in October.

They embarked on a romance even though he was still sharing his life and London home with Chinese-American Dara Huang and their two-year-old son, Christopher ‘Wolfie’ Woolf.

Miss Huang’s father, Po-Tien, a retired scientist with U.S. space agency NASA, told the Daily Mail earlier this month: ‘Why would they want to go and break this up? I can’t understand it. It’s not fair, but the Royal Family are so powerful. What can I do?’

One of Edo’s friends said: ‘As always in these cases, there are two sides to the story.’ 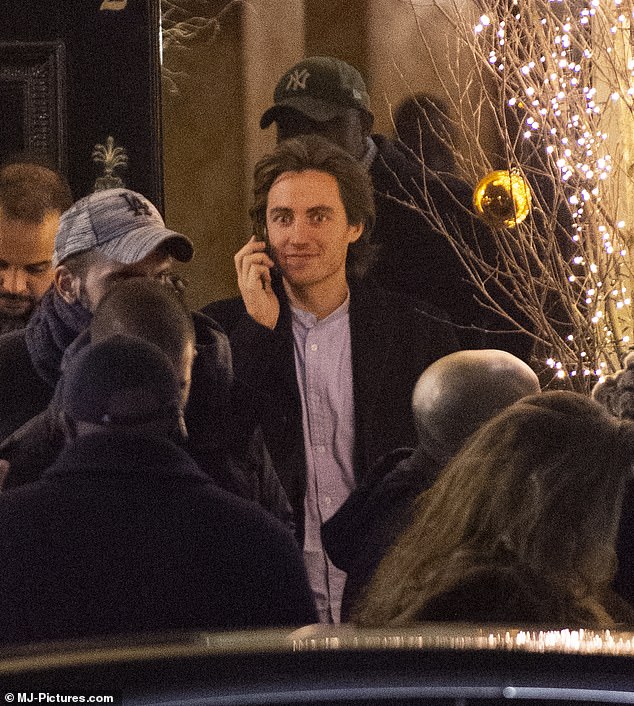 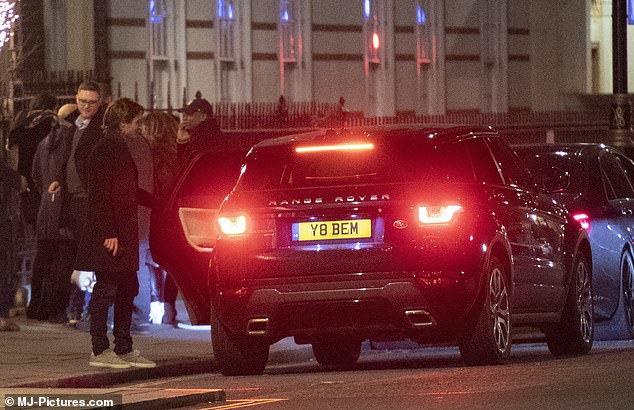 But when the pair eventually left in the early hours, they were careful to stagger their exits so they could not be pictured getting into the same Range Rover together

Throughout her turbulent marriages to Spandau Ballet’s Gary Kemp and then actor Jude Law, former model Sadie Frost was the gatekeeper of the hedonistic Primrose Hill set. 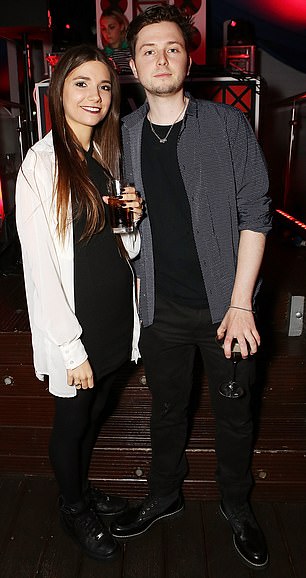 Now, the 53-year-old film producer has given her blessing to the next generation.

I can reveal that the eldest of her four children, Finlay Munro Kemp, has become engaged to tattoo artist Charlotte Mallory.

Fin proposed in a very creative way, by handing Charlotte a framed blank canvas, made by the artist Hayden Kays, with the words ‘Marry me?’ written in the middle.

‘My baby boy Fin has got engaged to his sweetheart Charlotte,’ confirms Sadie, who also has three children with Jude. ‘He turned out good and put on a very romantic display. So proud.’

Fin and his fiancee, both 28, met nine years ago at a London house party. They formed the electronic music duo, Rivrs, which is signed to Ed Sheeran’s label Atlantic Records.

‘We began sending each other music we liked and kept in contact while I was studying at Sussex Uni in Brighton and he was DJing and running club nights in London,’ Charlotte recalls.

Sharing a picture with pals of her intricate engagement ring, which consists of a diamante criss-cross band, she gushes: ‘Taken off the market!’

Has Cowell an Xmas present for Bruno?

Since ITV’S The X Factor was trounced in the ratings by the BBC’s Strictly Come Dancing, it would appear that Simon Cowell is taking drastic measures.

I hear The X Factor creator is spending time with Strictly judge Bruno Tonioli in Barbados this Christmas. 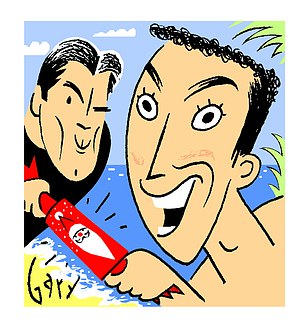 ‘Simon’s a great admirer of Bruno and tried to lure him to his show, The Greatest Dancer, without success,’ a friend tells me.

‘He would love to work with him.’

Cowell has form when it comes to poaching Strictly judges. He persuaded Alesha Dixon to leave for his Britain’s Got Talent in 2012.

Joining the pair in Barbados will be singer Elaine Paige, a close friend of Bruno.

Cowell — who has a son, Eric, with girlfriend Lauren Silverman — appears tired of inviting all his former lovers on holiday.

Tchenguiz keeps his house, his wife – and his mistress

Few wives would live under the same roof as their estranged husband and his much younger mistress.

But Heather Tchenguiz, who endures such an arrangement — as unsparingly recorded in a BBC documentary earlier this year — is radiating happiness as Christmas Day approaches.

Heather’s joy stems not so much from the proximity of her husband, property tycoon Robert Tchenguiz, 58 — still less from that of his girlfriend, Polish model Julia Dybowska, 27 — but from learning that the £20million Kensington mansion they share is safe from seizure by the Icelandic bank Kaupthing. 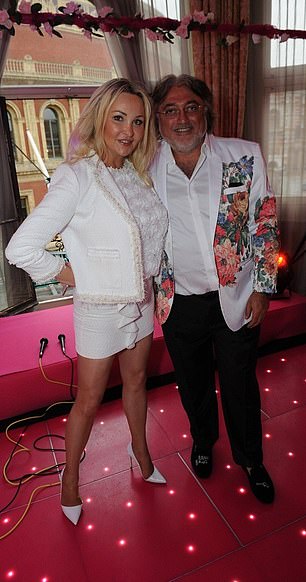 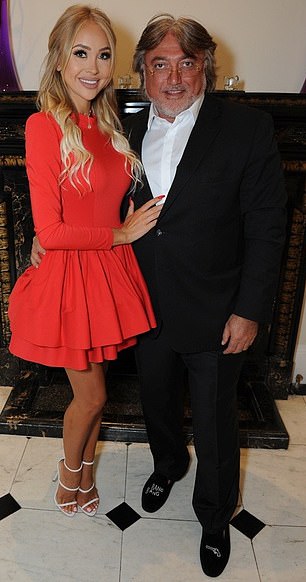 ‘It’s good news,’ American-born Heather, 48, tells me, reflecting on the settlement Tchenguiz has now reached with Kaupthing, with which he’d been at loggerheads since the financial crisis of 2008.

According to the documentary, Tchenguiz and Julia occupy the fourth floor of the mansion, while Heather is confined to the first.

She sighs: ‘Relationships are very complicated.’

With an industrialist father who regularly hosts Tony Blair at one of his Mediterranean villas, Massimiliano Carello was born lucky. But now the London playboy’s pals are convinced he even has help from on high.

Carello escaped a driving ban on a technicality, prompting a judge to tell him he had a ‘guardian angel’.

A court heard last week that the hedge fund trader, 28, whose brother Carlo is a friend of the young royals, was pulled over by police while riding his Ducati motorbike in Belgravia at 4.50am in June.

One of the officers breathalysed him. The test came back positive and the son of former Fiat boss Massimo Carello was taken to Islington police station to be tested again.

The reading at this second test came back as 63mcg of alcohol in 100ml of breath. The legal limit is 35mcg.

But under cross examination at Hendon Magistrates’ Court, the officer who administered the test was unable to remember if he had given an appropriate warning beforehand, so prosecutors had to drop the case.

District Judge Coleman told Carello: ‘There is a guardian angel watching over you. You got away with it this time — think yourself lucky.’

Christmas is a minefield in this ethically conscious age.

Carole Bamford, wife of a JCB billionaire peer, has come up with an ingenious bit of eco one-upmanship this season.

She sent cards to chums such as Jeremy Clarkson and David Cameron that are not only biodegradable but also impregnated with plant seeds.

Lady Bamford, who established the fashionable Daylesford Organic empire, wishes friends a ‘very special, very merry Christmas’ in the card, which features a picture of mistletoe.

Underneath, a note reads: ‘Every year, 1.5 billion Christmas cards are thrown away by UK households. Plant this biodegradable card in a pot of soil and see the seeds blossom in the new year.’

Could be a growth industry.

This is awkward timing: I hear that Buckingham Palace’s big innovation for the Queen’s Speech this Christmas is — a drone.

The radio-controlled flying camera is said to have been used for some aerial shots for the broadcast, filmed long before the chaos at Gatwick. ‘The Queen likes to keep up to date with technology, so it’s not surprising that a drone was used,’ a source tells me. ‘Drones have been used before to film royal estates.’

Palace officials usually like to boast about their latest ideas but were keeping schtum yesterday. Funny, that.