Princess Beatrice revealed that she is pregnant with her first child on the Sussexes’ third wedding anniversary – after the couple angered the Yorks by announcing they were expecting at Princess Eugenie’s wedding.

The Queen’s granddaughter, 32, who tied the knot with the Italian property developer Edo Mapelli Mozzi in September 2020, are expecting the baby in autumn 2021, Buckingham Palace announced this morning.

The Queen and both families are said to be ‘delighted’ with the news, which will have brought much joy to the monarch who is mourning the loss of her husband Prince Philip, who died last month aged 99.

But several royal fans took social media to point out that the timing of the announcement may not be a coincidence, after a book claimed Meghan Markle ’embarrassed’ Prince Harry after divulging she was pregnant during Princess Eugenie’s wedding day ‘in a huge social gaffe’ which left the bride and her mother Sarah Ferguson ‘furious.’

Taking to the comments section, one person penned: ‘Here comes Karma! Lovely news too,’ while Richard Eden commented: ‘Interesting coincidence that the #royal baby news was announced on Harry and #Meghan’s wedding anniversary. Beatrice’s sister, Princess Eugenie, was said to have been surprised that Meghan chose to announce that she was pregnant to guests at her wedding in 2018.’

Princess Beatrice and her husband Edo Mapelli Mozzi are expecting their first child in the Autumn and the Queen is ‘delighted’ by the news. Pictured, Princess Beatrice last spotted with mother Sarah Ferguson leaving Windsor Castle on May 15 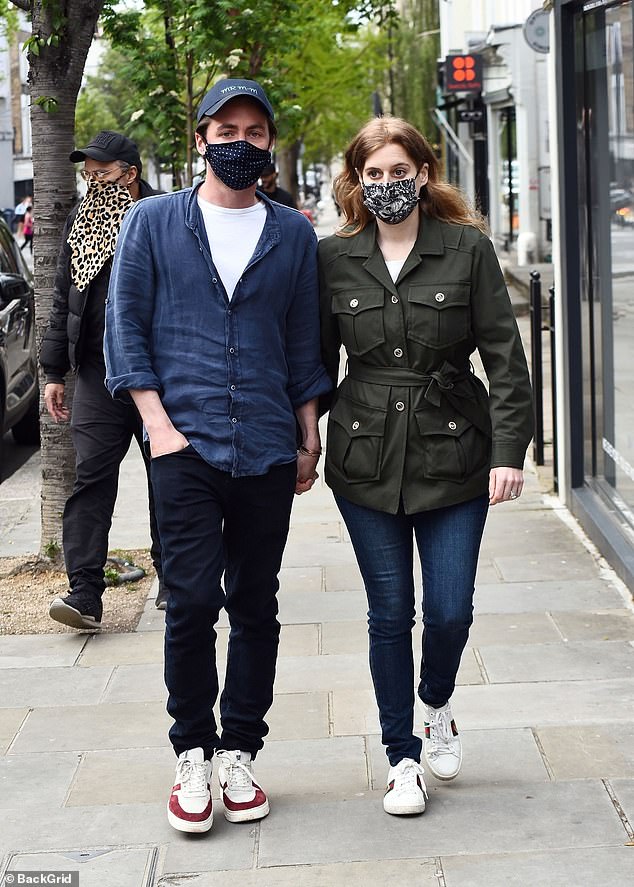 Princess Beatrice pictured with her husband Edoardo Mapelli Mozzi enjoying lunch al Fresco with a friend in Notting Hill, West London on 9 May

The couple tied the knot in a surprise secret wedding at the Royal Chapel of All Saints, in the grounds of Prince Andrew and Sarah Ferguson’s home of Royal Lodge, in Windsor Great Park on 25 September 2020. 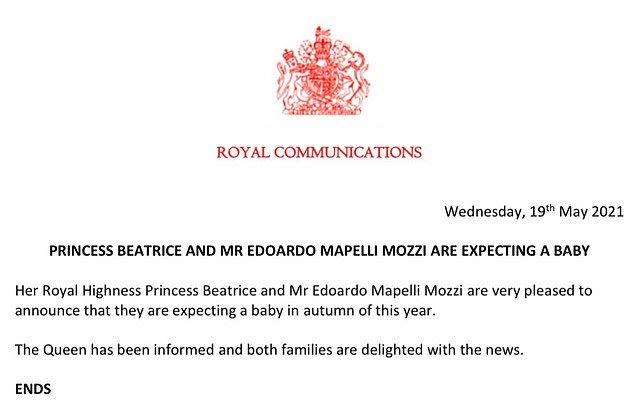 The Queen has been informed and both families are delighted with the news.

The baby will be the second grandchild for Prince Andrew and Sarah Ferguson and the Queen’s 12th great-grandchild following the arrival of Prince Harry and Meghan’s Markle’s second child in the summer.

Princess Beatrice became an aunt earlier this year when her sister Eugenie gave birth to her first child August with husband Jack Brooksbank on 9 February.

The royal was last seen being accompanied by her mother Sarah Ferguson as she drove away from Windsor castle in her personalised Range Rover on 15 May.

A week earlier, on 9 May, Princess Beatrice and Edo held hands and put on a loved-up display during lunch al Fresco with a friend in Notting Hill, West London.

Princess Beatrice looked relaxed as she chatted away at the table while checking out her friend’s phone, who appeared to be showing the couple an image.

The royal was also spotted strolling through London on 4 May and concealed any hint of a baby bump by wrapping up warm in a brown coat with a black tie up belt.

Looking chic and stylish, she carried a blue Louis Vuitton Handbag with dark sunglasses as she chatted away on her phone out in Mayfair.

Her baby boy or girl will be born 11th in line to the throne. But although their mother is a princess, their father has no title, meaning they will be plain Master or Miss Mozzi. 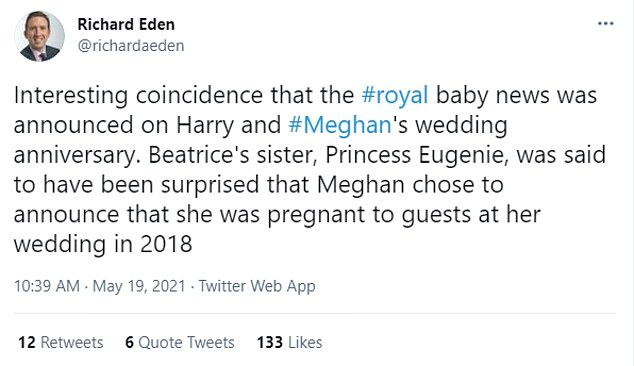 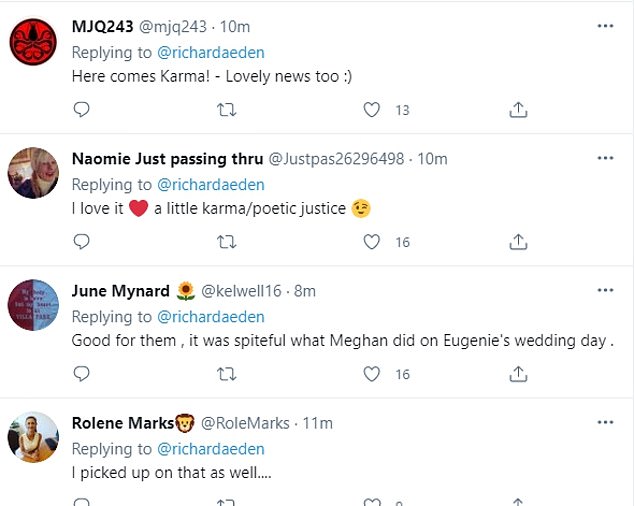 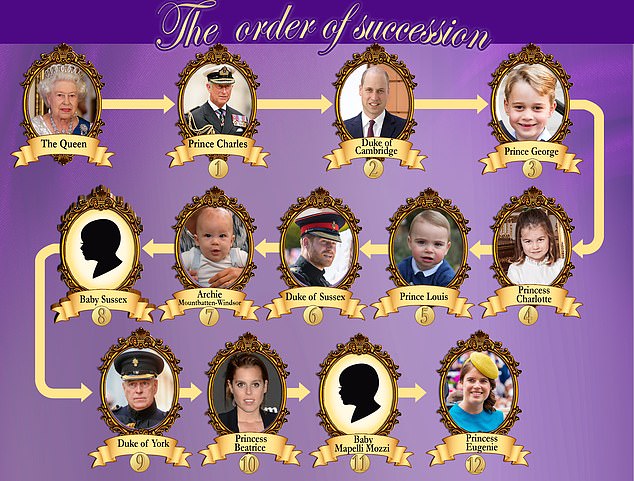 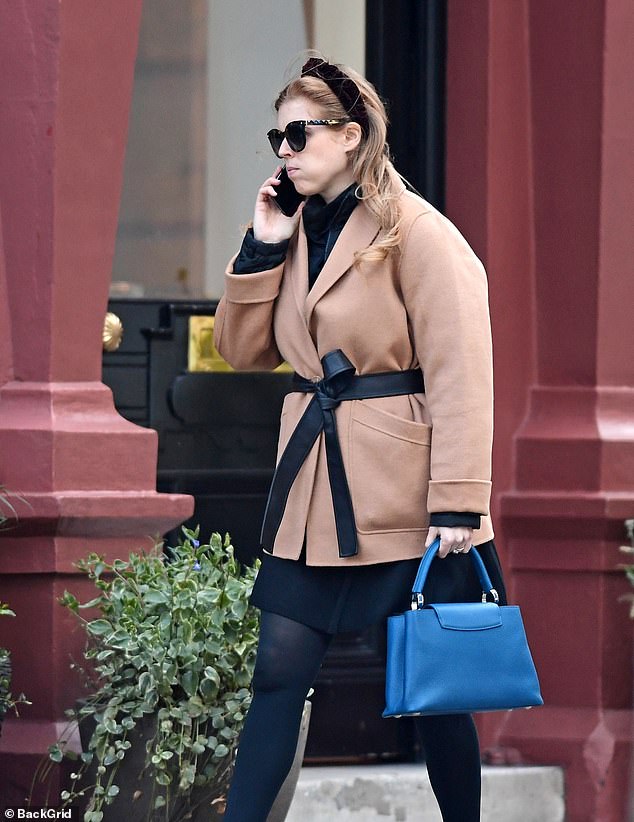 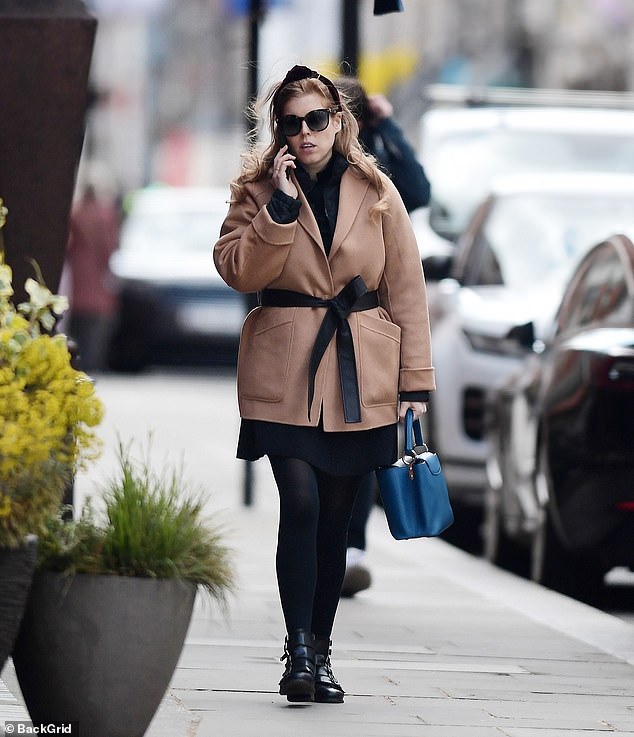 A rather windswept Princess wore a warm brown coat with a black tie up belt, a stylish blue Louis Vuitton Handbag with dark sunglasses as she chatted away on her phone out in Mayfair

Beatrice, 31, and Edo, were due to tie the knot at the Chapel Royal of St James’s Palace, in London, on 29 May. But their ceremony was postponed due to Covid-19 and no new date was given by the palace at the time.

Instead the couple chose to have an intimate ceremony attended by just ‘close family.’

A statement released by the palace said: ‘The small ceremony was attended by The Queen, The Duke of Edinburgh and close family. The wedding took place in accordance with all relevant Government guidelines.’

The bride’s parents, Prince Andrew and the Duchess of York as well as her sister Princess Eugenie, 30, are thought to have been included.

On marriage Beatrice became a stepmother to Edo’s son Christopher, known as Wolfie, who is also thought to have attended. 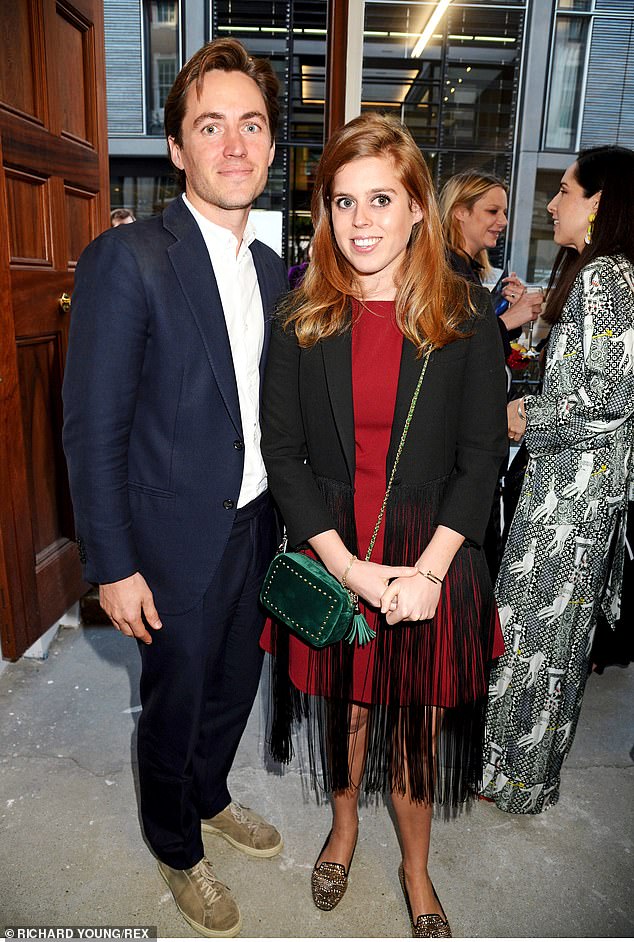 Princess Beatrice and her husband Edo Mapelli Mozzi are expecting their first child in the Autumn and the Queen is ‘delighted’ by the news.