Discreet, dignified and thoughtful — it was hardly the wedding anyone would have expected from the House of York.

After all, Princess Eugenie’s 2018 wedding to Jack Brooksbank was a dazzling blend of pomp, pageantry and showbiz with Robbie Williams chewing gum behind the Queen while actress Demi Moore and model Kate Moss were among those filling the pews.

Of all the members of the Royal family, however, there is surely none more misunderstood than Princess Beatrice.

Disregarded as the privileged older daughter of the Duke and Duchess of York, many see her as a party princess, cavorting on yachts, wearing silly hats and generally not doing a great deal. 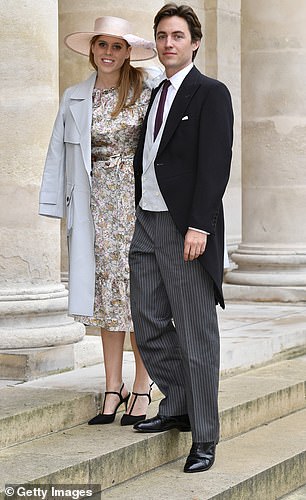 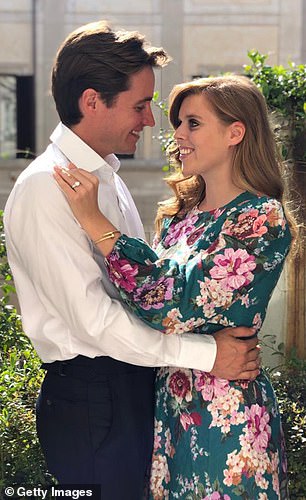 When she rather cruelly became a laughing stock for the oh-so fashionable ‘pretzel’ hat worn to the Royal Wedding of her cousin Prince William to Kate Middleton, Beatrice saw the funny side. She put it on eBay and gave the £80,000 proceeds to the charities Unicef and Children In Crisis.

Beatrice keeps a much lower profile today and holds down a responsible job at software company Afiniti, where her diplomacy is said to be an asset.

When Dave Clark, her boyfriend of ten years, married two years after their 2016 split, the humiliation must have been acute. Watching younger sister Princess Eugenie marry before her can’t have been easy, either.

To top it all off, the agony of seeing her father facing scrutiny from the FBI after being embroiled in the sleazy world of Jeffrey Epstein and Ghislaine Maxwell must have been almost unbearable.

During the initial meetings with BBC producers ahead of her father’s disastrous Newsnight interview, Beatrice was invited along as a ‘calm head’. An insider at the meeting said that Beatrice was ‘impressive, articulate and cautious’, but despite her initial misgivings her father decided to press ahead.

In spite of all this, she keeps calm and carries on – a quality admired by the Queen who could not have given her granddaughter a greater seal of approval than loaning her a dress and a treasured tiara.

Courtiers say the Queen has made it clear that the sins of the father should not be visited on the children. That, after all, would be a terrible shame.

For in person, Beatrice is charming, articulate and intelligent. When her mother holds business meetings, it is often Beatrice who Fergie wants by her side as a trusted adviser and confidante. 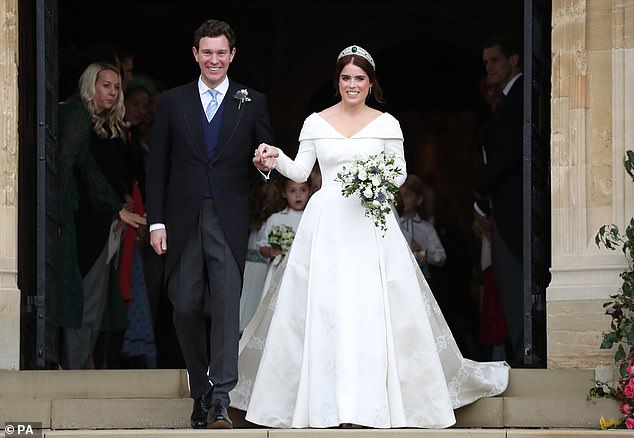 It was at one such rendezvous over afternoon tea at a five-star London hotel that I first met Beatrice. Erudite and elegant, she is also incredibly thoughtful, stepping in to clarify points during the discussion with a gentle: ‘I think what Mummy is saying is…’

When she said goodbye, Beatrice wrapped some dainty iced biscuits in a napkin and handed them to me to take home for my young son.

No wonder she’s taken so well to her role as stepmother to Edo’s four-year-old son Christopher, known as Wolfie.

Their small, intimate ceremony was driven by circumstance rather than design, but a private wedding for close family was – in the end – the perfect fit for the private pair.

After all, their relationship to date has been carefully conducted out of the spotlight.

In the beginning, this was perhaps for good reason. Edo and Beatrice’s families have been close for decades, moving in similar circles. Indeed, Beatrice has spoken of their ‘similar interests and values’.

So when the couple began dating in 2018, said to have been just weeks before Eugenie’s wedding to Jack Brooksbank, they were keen to keep it under wraps until both felt the time was right.

There may, too, have been other sensible reasons for caution. Questions had been raised over the timing of the start of their relationship – Edo had been living with his fiancée, Chinese-American architect Dara Huang, the mother of his son. But any suggestion that Beatrice had caused the split were denied.

Friends who saw them together, after Edo was introduced as Beatrice’s boyfriend noticed how close they already seemed. ‘They hit it off instantly and have a real laugh together,’ one confided.

But even then they were rarely seen in public together. The following January, they were spotted on the Lamu archipelago off the coast of Kenya, where Edo’s family have an estate.

They may have hoped it would offer them privacy, but it raised eyebrows as the place where Edo had also proposed to Dara three years previously. 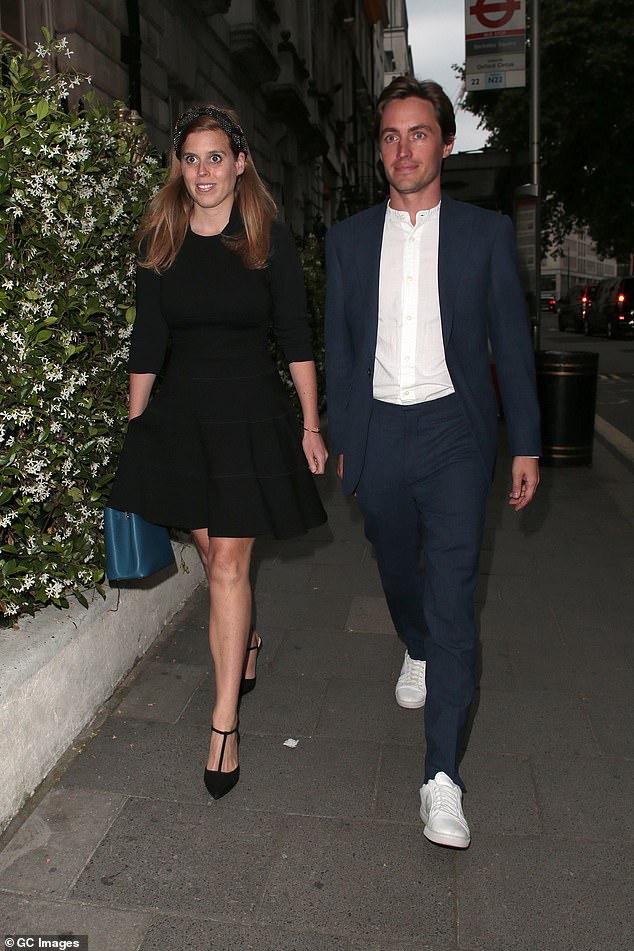 They may have hoped it would offer them privacy, but it raised eyebrows as the place where Edo had also proposed to Dara three years previously.

Their first tentative steps into the public spotlight were made in March 2019 with an appearance at a gala at the National Portrait Gallery.

By this point, Edo had been moved into Beatrice’s apartment in St James’s Palace and rumours had begun to swirl that the pair were set to marry.

Royal watchers were forced to wait – the announcement did not come until late September.

Edo is said to have popped the question in Italy, with a £300,000 diamond engagement ring he designed with jeweller Shaun Leane.

In a statement, Beatrice said they were both ‘so excited to be embarking on this life adventure together’.

But it was Edo’s own romantic tribute to his fiancée, posted on Instagram, which seemed to sum up the strength of their feelings. ‘You will never be alone – my love, my heart is your home,’ he wrote.

From the start, there was speculation the two would opt for a low-key wedding ‘in the back garden’, in part to quell the disquiet over the taxpayer-footed bill for the security surrounding Eugenie’s lavish nuptials and growing concern over Andrew’s relationship with the late Jeffrey Epstein.

It failed to pour cold water on their relationship, however.

Their excitement must have been dampened by the pandemic, which led to their original wedding date, May 29, being postponed.

No doubt there will be time for a party next year but for now, Beatrice is beyond reproach.

Even her fashion choice for the big day came with the ultimate Royal seal of approval.

And her decision not to release photos on the wedding day so as not to overshadow the Queen’s knighting of Sir Tom Moore, was thoughtful.

In the end, her wedding was much like the Beatrice that very few people get to see: sensible, unfussy, thoughtful – impossible to criticise.