Princess Charlene of Monaco is like any other mother when it comes to showing off her little ones with her Instagram account flooded with snaps of her three-year-old twins.

And on Tuesday the mother-of-two shared snaps of their latest adventure as twins Prince Jacques and Princess Gabriella enjoyed afternoon tea with France’s First Lady.

Brigitte Macron, 65, welcomed the royal siblings to her home of the Élysée Palace in Paris along with their mother Charlene, 40, over the weekend.

The former Olympic swimmer had joined her husband Prince Albert, 60, in the French capital to mark the WWI centenary alongside other world leaders. 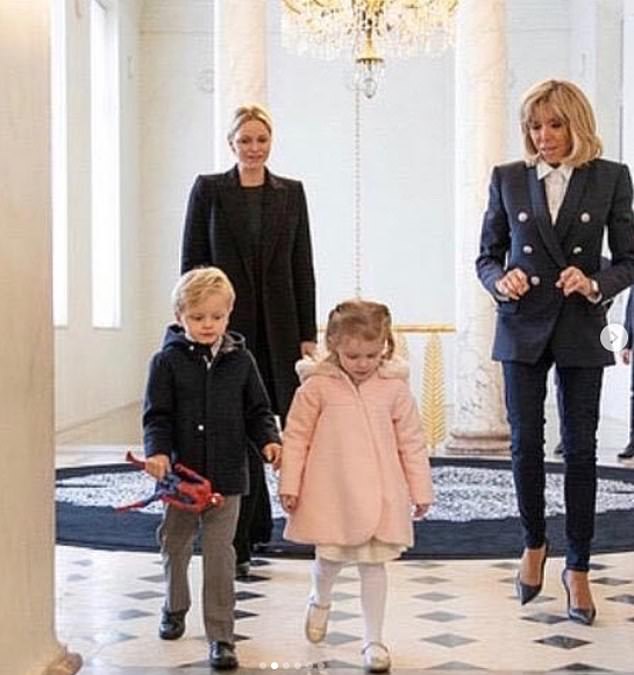 And during their down time the mother and her two children were treated to a Parisian playdate with Brigitte acting as host.

In the photographs shared by Charlene the adorable twins are seen exploring the palace with a chic Brigitte leading the way dressed in an elegant navy two piece suit.

Three-year-old Gabriella looked sweet in a baby pink coat with a white party dress poking out from underneath wearing a sparkling pair of gold pumps for the occasion.

Meanwhile her twin brother Jacques looked smart in a pair of grey trousers with a matching waistcoat and smart black shoes, keeping warm in a navy blue pea coat. 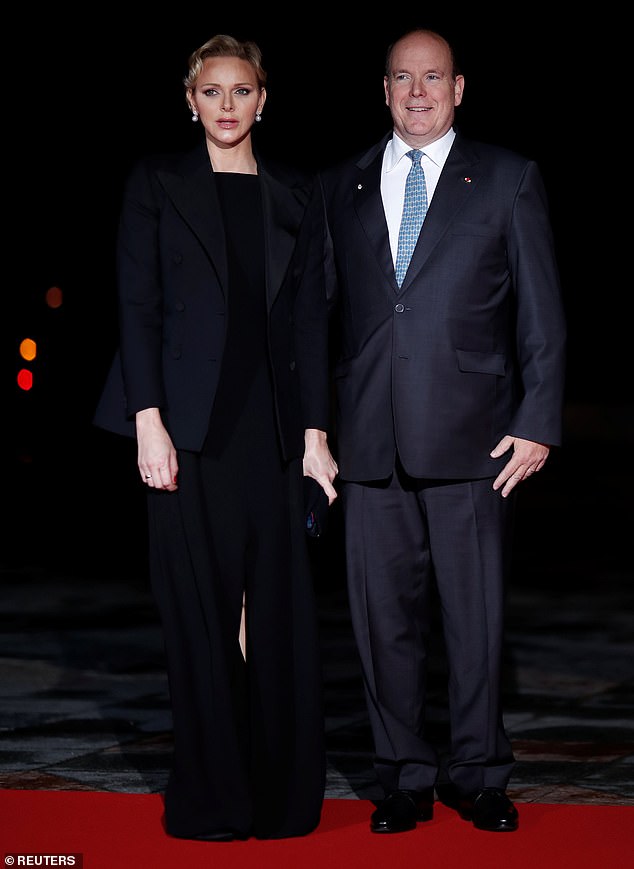 He appeared to have bought along his own entertainment in the form of a Spider-Man doll which he could be seen carrying throughout the visit.

Following on behind Charlene looked typically elegant in a silk black dress, covering up in a black wool coat.

At one point President Macron, 40, joined the party to introduce the excitable twins to his dog a Labrador-griffon cross called Nemo who appeared to be on his best behaviour.

Captioning the selection of snaps on Instagram Charlene wrote: ‘Our twin’s first trip to Paris and tea with Madame Macron. 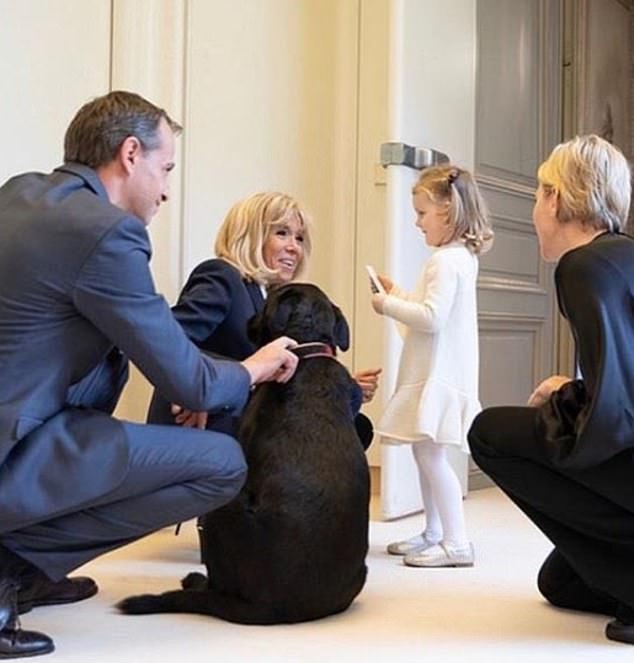 At one point President Macron, 40, joined the party to introduce the excitable twins to his dog a Labrador-griffon cross called Nemo 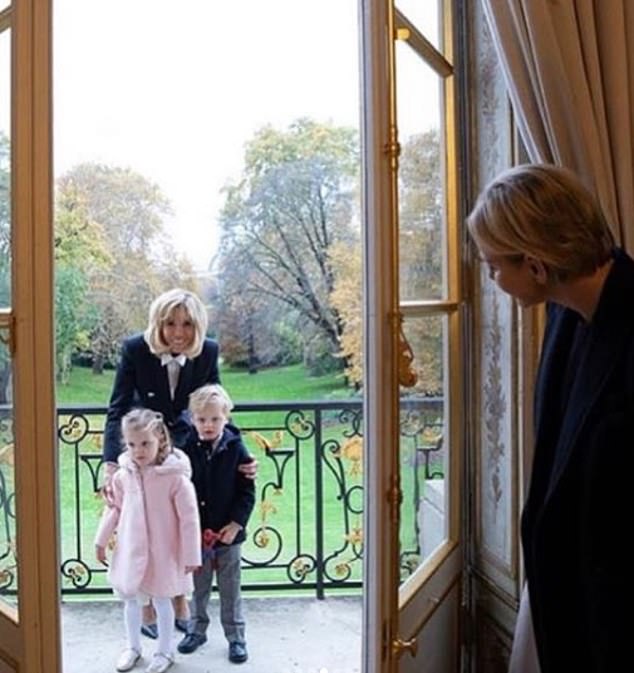 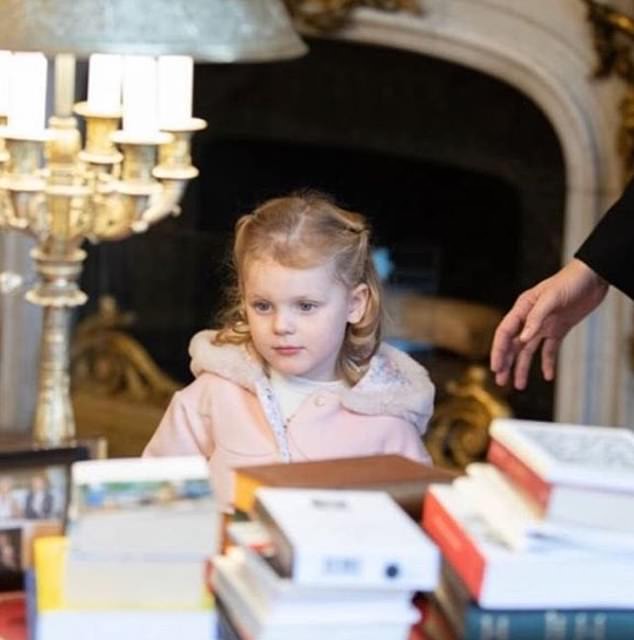 Prince Albert and Charlene joined other world leaders over the weekend to mark armistice day.

President Trump and his wife Melania were among those at the international ceremony for the Centenary of the WWI Armistice at the Arc de Triomphe on Sunday.

The evening before the cohort descended on the Orsay Museum in Paris for an official dinner marking commemorations for Armistice Day.

Gabriella and Jacques were born two minutes apart on 10 December, 2015.

While Gabriella is actually older than her brother, he is heir to the throne due to succession laws in Monaco that give precedence to the first born son. 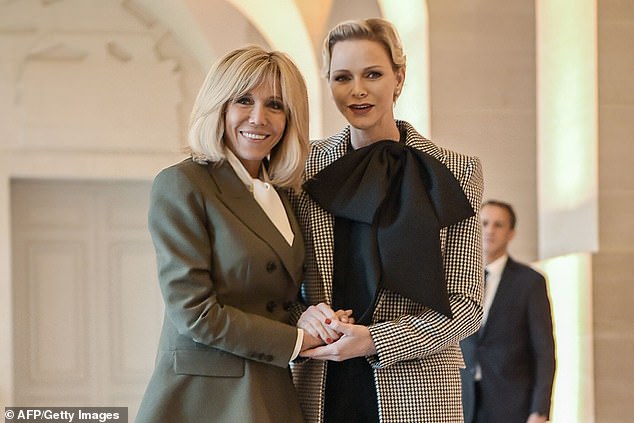 Prince Albert and Charlene joined other world leaders over the weekend to mark armistice day. Pictured: Charlene and Brigitte pose during a spousal event at the Chateau de Versailles