Princess Charlene of Monaco’s daring shaved head could be a sign of a new-found ‘liberation’ and signals she ‘isn’t waiting for permission’ anymore, an expert revealed today.

The mother-of-two, 42, shocked royal fans around the world when she debuted a dramatic half-shaved haircut on a royal outing yesterday.

The royal was accused of trying to run away three times before she married Prince Albert, 62, in 2011 upon learning of a third love-child he fathered, and since spoken several times of her ‘loneliness’ in Monaco.

Meanwhile royal expert Nigel Crawthorne, author of Prince Andrew, said the move was an ‘indication of a major development in Charlene’s life that has shorn away Monegasque etiquette’, adding: ‘When a royal changes their appearance as dramatically as Princess Charlene of Monaco did, it is a very conscious decision and a sign that they want to tell the world something has changed dramatically in their life.’

Princess Charlene of Monaco, 42, appeared unrecognisable yesterday as she attended the traditional Christmas tree ceremony at the Monaco Palace 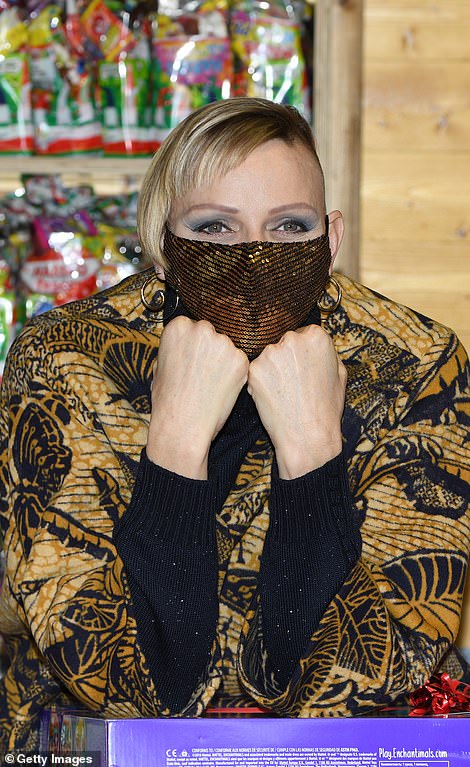 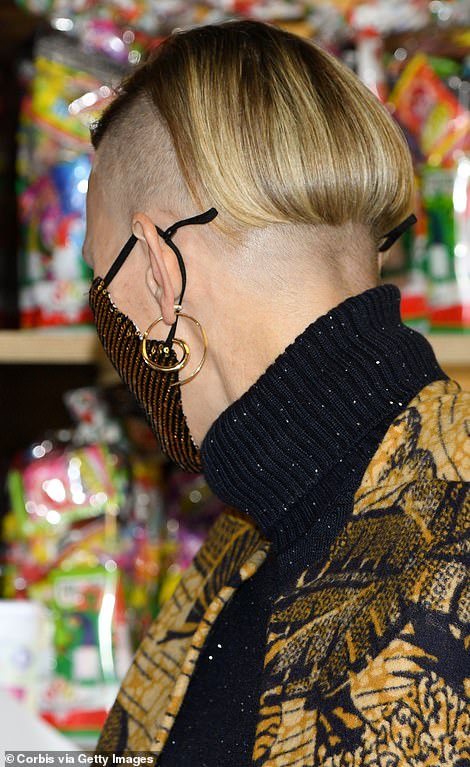 Dr Becky said a dramatic change in hair could indicate Charlene’s positive body image and confidence, revealing: Hair is a great way of expressing ourselves, people have the opporuntiy to really go for it.

‘This really shows confidence, it shows you’re not afraid to be different.’

She said the bold styling showed the mother-of-two doesn’t care about the judgement of others, and could be ‘liberating’ for her.

The psychologist explained: ‘Often people don’t express themselves by having wild hairstyles due to the fear of what people will think. 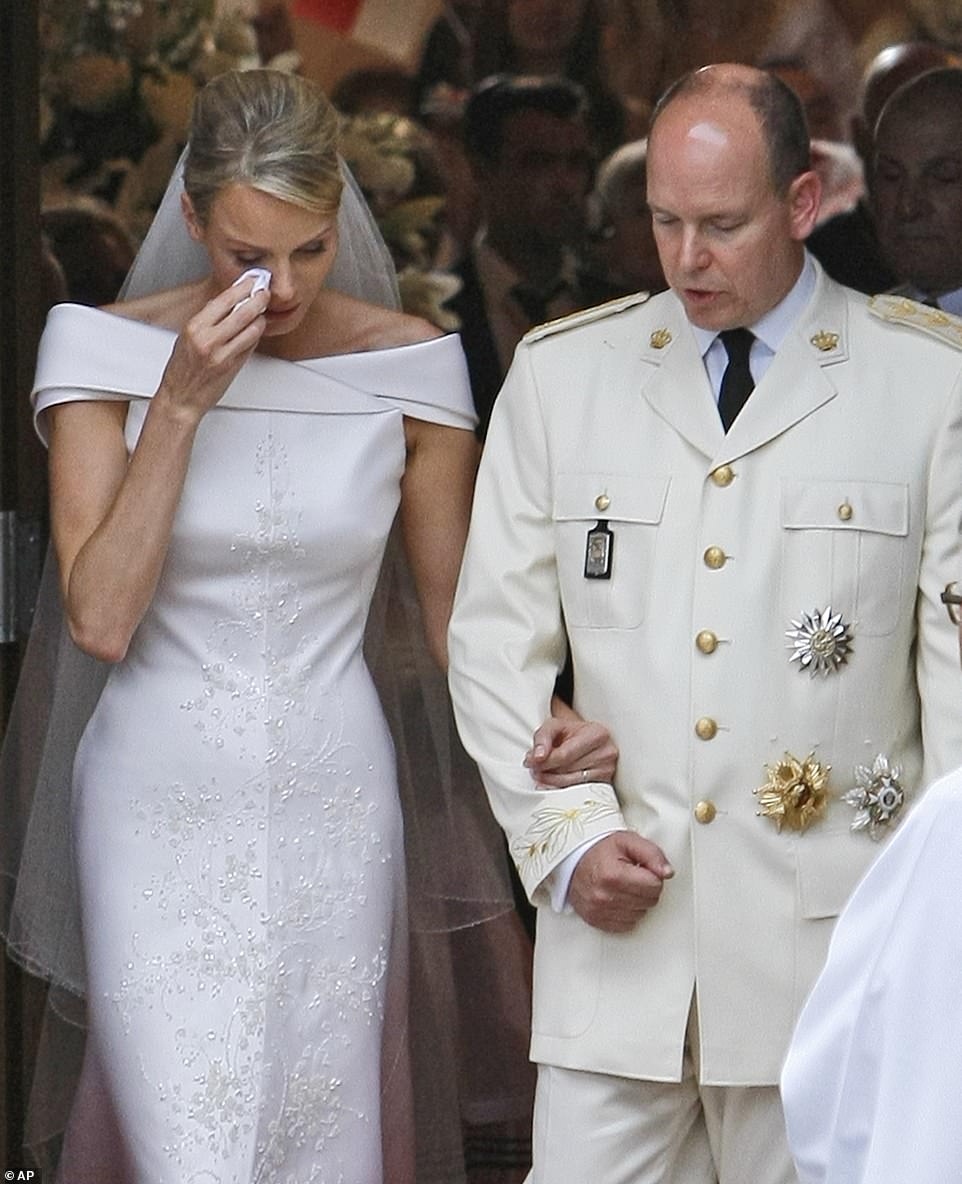 Charlene, who was accused of trying to run away three times before she married, was seen in floods of tears on her wedding day to Prince Albert in 2011

She said the royal might actively be seeking attention, adding: ‘So what better way of doing this than through her hair?’

‘She’s actually just living in her life in a very liberated way.

‘She probably feels quite free that she’s done something quite free and different from her hair rather than conforming to what people think a royal might be like.’

Meanwhile the psychologist said it indicated she was in a ‘very free state’, saying: ‘She looks, in these pictures, like she’s having a lot of fun, her body looks very relaxed, she’s not showing any signs of distress in her facial expressions. 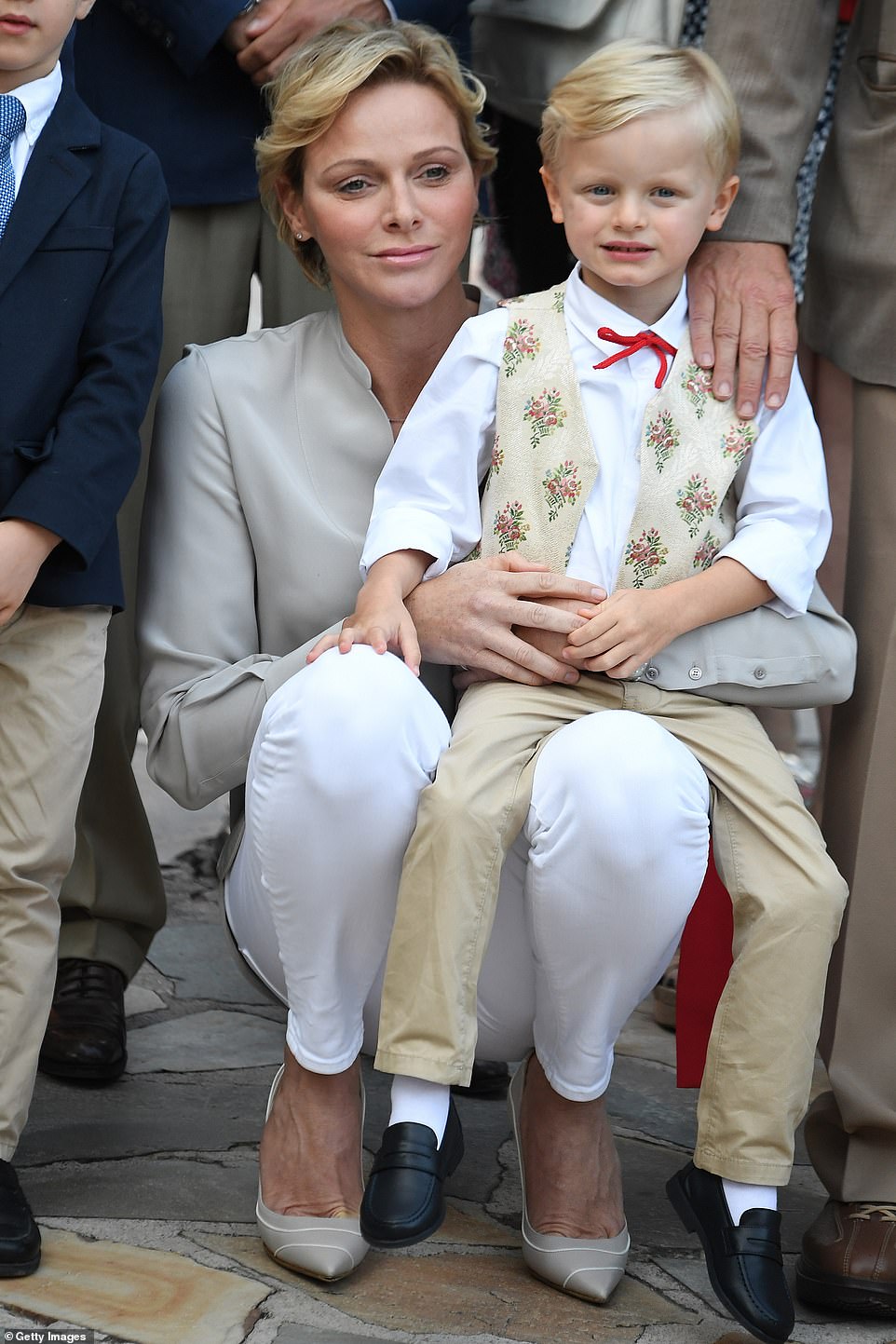 The mother-of-two, who shares son Jacques and daughter Gabriella with Prince Albert, has spoken of her ‘loneliness’ in Monaco on several occasions

‘Originally the word etiquette meant no more than the protocol at the court. They know that image is everything and it becomes second nature whether they want it or not.’

‘It seems that Princess Charlene is telling us that there has been a major development in her life that has shorn away Monegasque etiquette. Soon we will no doubt hear more.’

The royal showed off her bold new look as she joined her husband Prince Albert, 60, and their six-year-old son Jacques to hand out Christmas presents in Monaco. 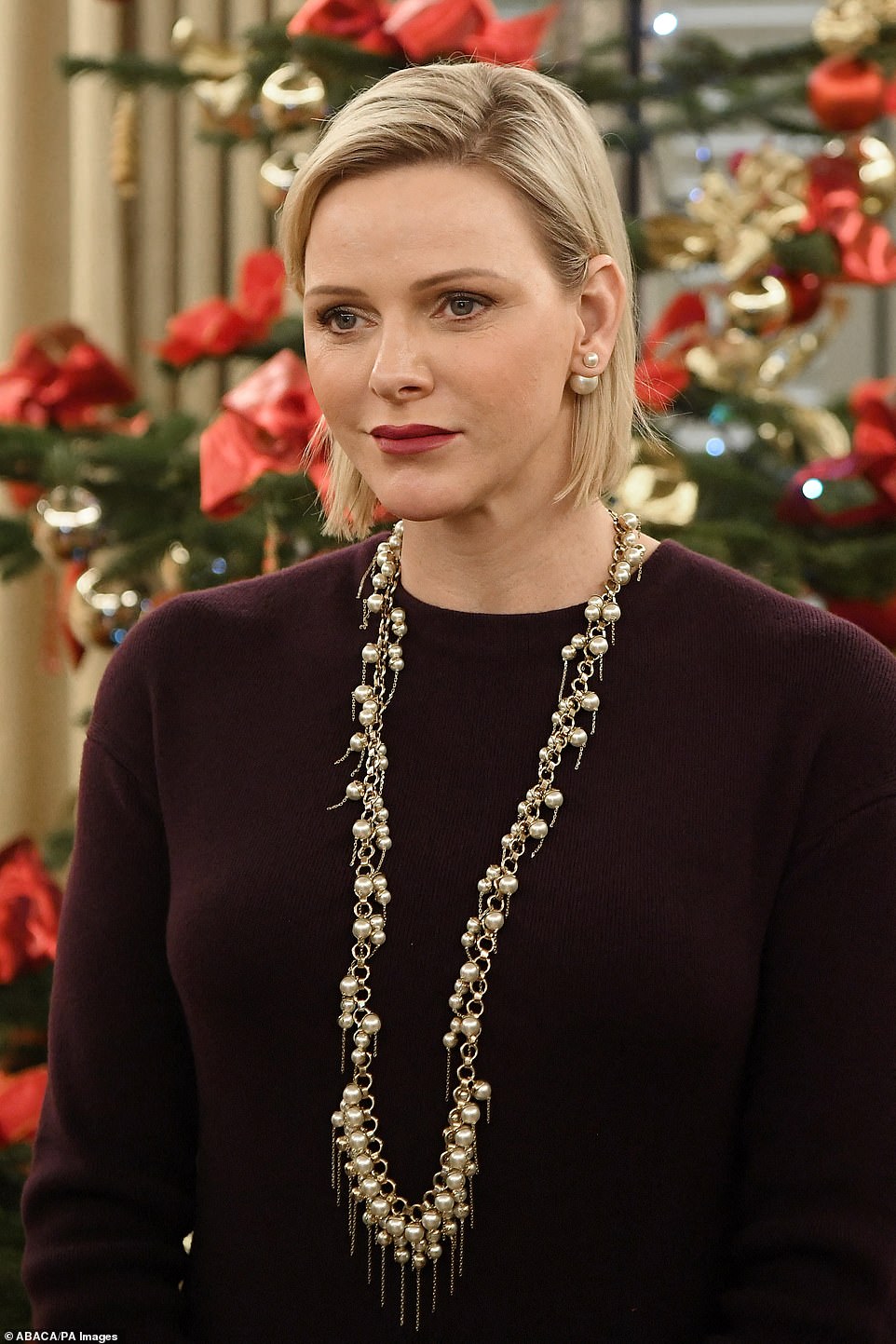 Her new dramatic hairstyle is a far departure from her usual tresses, which she tends to wear in a soft blonde bob

The mother-of-two’s new style features a close shave down the left side of her head, with the remaining hair dyed blonde-brown and cut in a choppy, punk-inspired style.

Speaking about the new look to FEMAIL, Brad Allen, owner of JellyFish LOS in Southend on Sea, said the 42-year-old’s style was ‘too harsh’ and ‘didn’t suit her’.

1992 – An American national files a paternity lawsuit against the Prince, claiming that he was the father of her daughter, Jazmin Grace.

2005 – In May, a former flight attendant claims that her youngest son, whom she named Alexandre Grimaldi-Coste, was Prince Albert’s child. She states that his parentage had been proven by DNA tests requested by the Monegasque government.

On 6 July, a few days before he was enthroned on 12 July, the Prince officially confirms via his lawyer Lacoste that Alexandre was his biological son.

2006 – After a DNA test confirmed the child’s parentage, Albert admitted, via statement from his lawyer, that he is Jazmin Grace’s father.

2011 – Princess Charlene was said to have bolted two days before the royal wedding after hearing Prince Albert had a third love child during their relationship.

It was alleged that Charlene tried to flee home to South Africa three times before her ‘arranged marriage’, at one point taking refuge inside her country’s embassy in Paris.

Monaco officials were said to have coaxed her back by brokering a deal between the Prince and his reluctant bride that she provide him with a legitimate heir.

After that she would be free to leave of her own free will.

During the wedding, Charlene was in floods of tears, while her husband looked on impassively.

Later in the year, Princess Charlene confessed she felt ‘very lonely’ in Monaco

2012 – Princess Charlene was reported to be ‘depressed’ at her failure to provide her husband with a legitimate heir.

In December Charlene gave birth to twins Princess Gabriella and heir to the throne Prince Jacques.

2019 – In a rare interview, Princess Charlene confessed it is ‘sometimes hard to smile’ and said the year had been ‘very painful’

In another interview, she said she found motherhood ‘exhausting’

The stylist, who also works as a senior educator for celebrity hair dye brand Color Wow, added he understood why people want a new look after lockdown, but advised against getting anything as drastic as the royal adding the cut was ‘dreadful’.

‘I’m in total shock by the “transformation”,’ he said.

‘I understand people may want to try something new after getting bored staring at the same cuts, colours, roots for months on end during lockdown.

‘But it’s not something I’d advise in such drastic measures’.

‘Firstly it’s a dreadful cut. It looks like one of her six-year old twins has done it. It doesn’t suit her elfin face and delicate features at all. The colour is too harsh too. The dirty golden tones make her overall blonde look dull and unflattering.

‘I really loved the simplicity of her former cut, and her ash blonde tones.

‘I’m all for change and having fun with your locks but she’s gone from elegant and classy to royal c*** up!’

Although the former Olympic swimmer has often been spotted favouring shorter haircuts, her latest look marks one of her most daring styles in recent years.

Charlene, who was born in Bulawayo, Rhodesia (now Zimbabwe), represented South Africa in the 100 metre medley relay at the 2000 Sydney Olympics – and retired from swimming in 2007.

The royal has been dogged with rumours about her relationship with Prince Albert and royal life for years.

The couple met at the Mare Nostrum swimming competition in Monte Carlo in 2000, announced their engagement in 2010.

Princess Charlene was said to have struck a ‘deal’ with the principality’s playboy ruler to bear him a child after she tried to flee before their wedding in 2011.

Rumours of a rift and a ‘pregnancy pact’ erupted even before the couple married in a lavish state wedding.

Charlene was said to have bolted for Nice airport two days before they married after hearing Albert had had a third love-child during their relationship.

Monaco officials were said to have coaxed her back by brokering a deal between the Prince and his reluctant bride that she provide him with a legitimate heir.

After that she would be free to leave of her own free will, it was reported in July 2011.

One source said at the time: ‘Charlene will provide an heir, then if things don’t go well, she will receive a generous divorce settlement once she’s served a decent amount of time.’

Charlene called suggestions that she was reluctant to marry ‘hilarious’ on the Today show.

‘Why would we go to all this effort, to have this fantastic couple of days, and have our most intimate and dearest friends come and join us, for us to be reluctant,’ she said.

Her husband suggested the rumours might have been triggered by jealousy from people who ‘did not like the fact that we were finally together and married.’

He was apparently told on the day of his wedding that he would have to take a paternity test to determine whether he was the father of the third illegitimate child.

Charlene, who was accused of trying to run away three times before she married, claimed the rumours were purely generated to sell magazines.

But she has spoken several times of her ‘loneliness’ in Monaco, saying in 2011: ‘I only have two people I consider friends here.’

Before he met Charlene, Albert dated dozens of the world’s most famous and beautiful women, including Angie Everhart, Brooke Shields, and supermodel Claudia Schiffer. He also battled persistent rumours he was gay.

A Monaco government spokesman insisted that once he met Charlene, Albert knew he had finally found the woman he wanted to provide an heir.

The spokesman told France’s high society Point de Vue magazine last year: ‘Charlene has beauty and style, and we are all praying that she will ensure the royal succession in our principality.

‘Albert has never settled down in the past, but knows that the time is now right to produce the next ruler of Monaco.’

Just one year after their wedding, it was reported that Charlene was ‘depressed’ at her failure to provide her husband with a legitimate heir.

Voici magazine said: ‘Charlene has made the subject of pregnancy a taboo topic around the Royal palace.

‘She might have a smile on her face at official functions, but inside she is stressed and frustrated. This subject is weighing more and more heavily on her shoulders.’

Her pregnancy was announced in May 2014, and in December that year she gave birth to twins Princess Gabriella and heir to the throne Prince Jacques.

In an interview in 2019, she confessed she had had ‘an incredibly painful’ year, saying the ‘past year has definitely hit me hard’.

The year saw her father undergo surgery in South Africa and two friends die within 10 days of each other.

The usually press-shy princess was surprisingly candid as she revealed that a lot of her sadness was down to being homesick, despite her brother Mike Wittstock and his family also living in Monaco.

‘I have the privilege of having this life, but I miss my family and my friends in South Africa and I’m often sad because I cannot always be there for them,’ she explained.

And speaking to French magazine Point de Vue, Charlene described herself as a very hands-on mother but confessed that her parenting duties are ‘often exhausting…’