The Duchess of Cambridge had her hands full looking after her youngest son Prince Louis during the Platinum Jubilee celebrations in London, but hilarious videos show she had some help from her daughter Princess Charlotte.

Clips from several events during the Jubilee, including Sunday’s Platinum Pageant and Buckingham Palace balcony appearance, as well as Thursday’s carriage ride, show Charlotte, seven, giving her younger brother a dressing down.

And even Prince George, eight, isn’t immune from his sister’s bossiness, with a video showing the future king being told how to pose on the balcony – and immediately heeding Charlotte’s instructions.

Throughout the Platinum Jubilee celebrations this weekend, Charlotte was seen telling off her two brothers. During the carriage ride, she told Prince Louis to put his hands down (pictured) 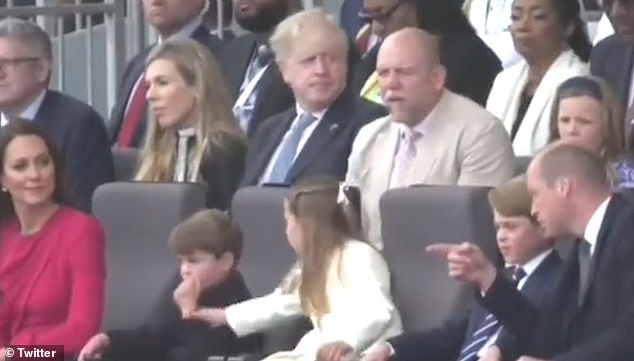 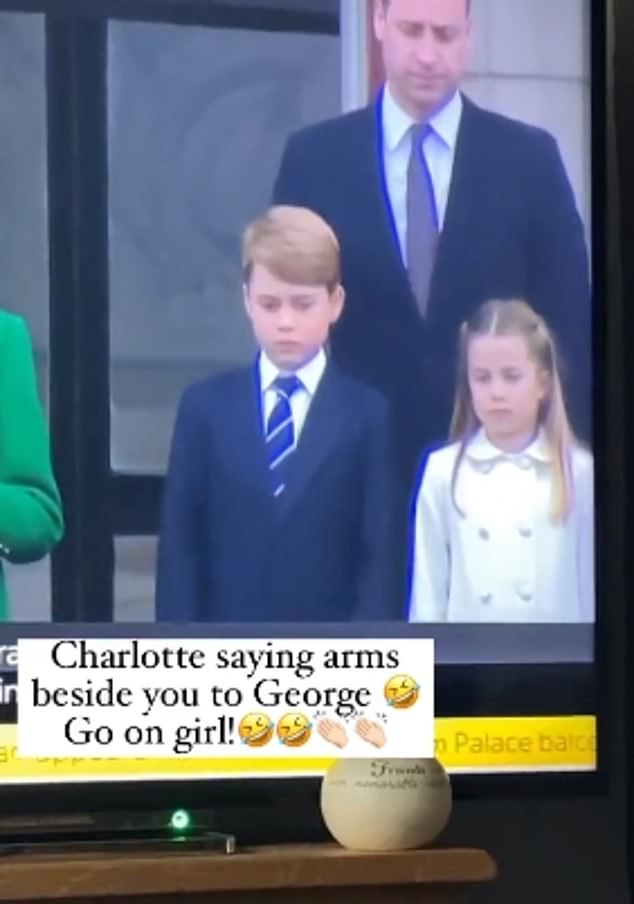 Even future king Prince George (pictured, left) was not immune from a dressing down by Charlotte (right), who told him to stand with his arms by his side when the Cambridges took to Buckingham Palace’s balcony on Sunday

In a clip from Sunday’s Platinum Pageant, shared on Twitter by royal watchers, Charlotte is seen pushing Louis’ arm down and away from his mouth, to stop him from sucking his fingers.

She then appears to brandish her fist at her younger brother, perhaps warning him against sucking his fingers again.

At this point, their mother Kate Middleton steps in, and whispers something to Charlotte.

Undeterred by the ticking off, Louis then mocks his old sister, brandishing his own fist in the same way, before his mother gently pushes his arm back onto his lap. 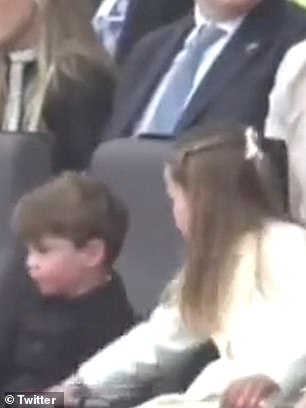 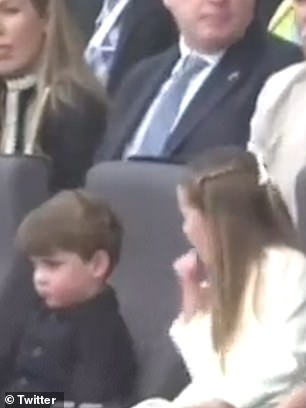 After pulling Louis’ hand away from his mouth (left), Princess Charlotte appeared to brandish her fist at her younger brother (right) 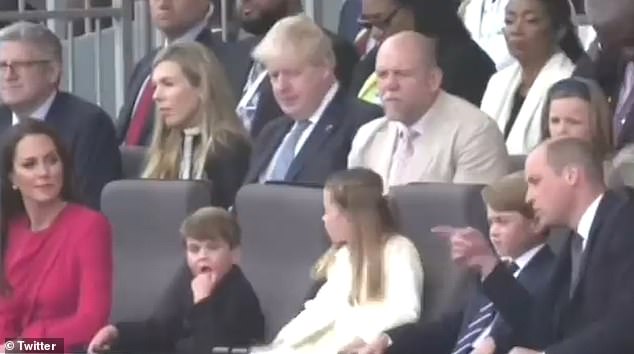 Undeterred by the ticking off, Louis went on to mock his sister Charlotte, waving his own fist in the same way 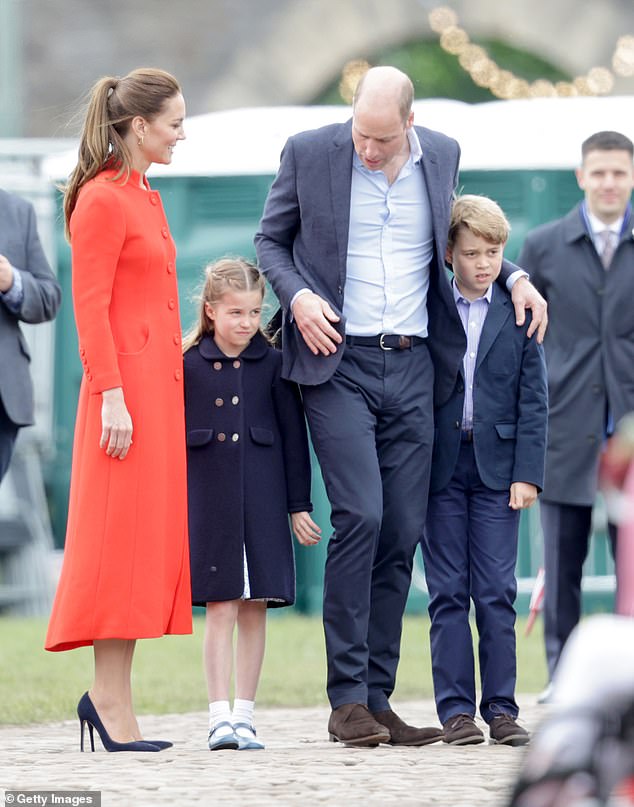 The Cambridge children made a number of appearances over the Platinum Jubilee weekend, with Charlotte and George marking their first royal engagement at Cardiff Castle on Saturday

Sunday’s pageant, which marked the finale of the four-day Platinum Jubilee celebrations, was the last event attended by the Cambridge children.

During the four-day weekend, they were seen at several events, starting with Thursday’s carriage ride down The Mall, ahead of Trooping the Colour.

Charlotte and Louis, as well as their big brother Prince George, eight,  shared their ride with their mother Kate Middleton as well as the Duchess of Cornwall. 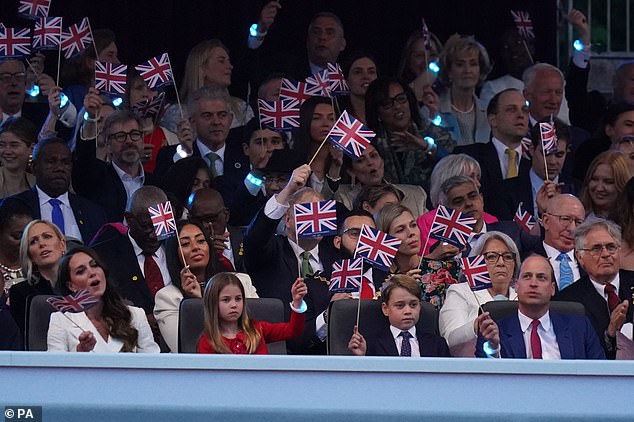 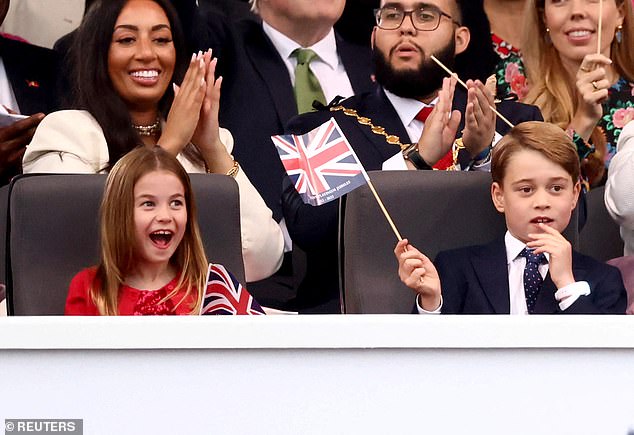 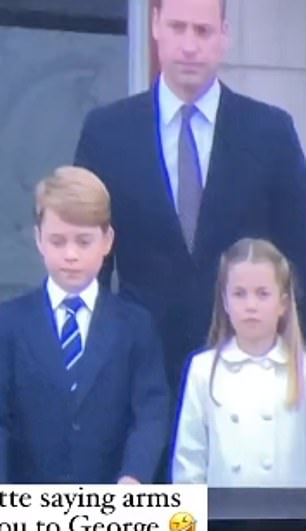 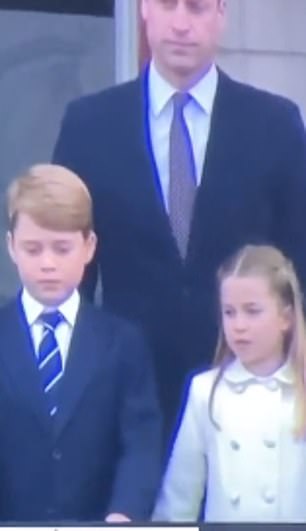 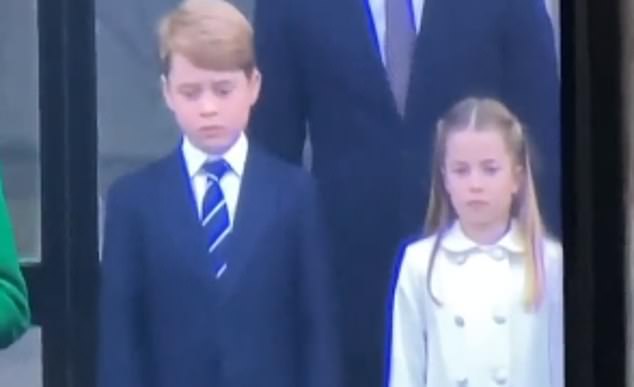 After being told to change his pose, George immediately followed his younger sister’s instructions, and changed the position of his arms

While in the carriage, Charlotte was once again filmed telling off Louis.

As the youngest Cambridge waves enthusiastically, Charlotte pushes his hand down.

She then says something to him, seemingly telling him to stop waving.

Once again unbothered by the stern words, Louis almost immediately starts waving at the assembled crowds once more.

Another video of the Cambridge children, this time from Sunday’s Buckingham Palace balcony appearance, showed that even future king Prince George is not above a dressing down from Charlotte.

As the young royals are seen standing on the famous balcony, the seven-year-old princess taps her older brother, before telling him to put his arms by his side.

He immediately takes her advice, duly straightening his arms, and posing in the way Charlotte instructed.