Princess Diana’s much loved car is up for sale, 25 years after her death.

The Ford Escort RS was driven by the princess from 1985 to 1988, during the early years of her sons William and Harry’s childhoods.

After being won on a radio station competition in the 90s, it was privately owned for a number of years before becoming part of a Ford RS collection, where it has been kept in ‘top condition’.

Much less flashy than her later cars, mother-of-two Diana shunned the Royals’ Rolls-Royces and Daimlers for the modest Escort for a time and was often pictured driving it in London.

Silverstone Auctions Classic Car Specialist Arwell Richards told FEMAIL:  ‘We wouldn’t be surprised if it went for over £100,000.’

Princess Diana driving her Ford Escort with Prince William in a car seat in June 1986. The royal car is expected to fetch six figures at auction this month 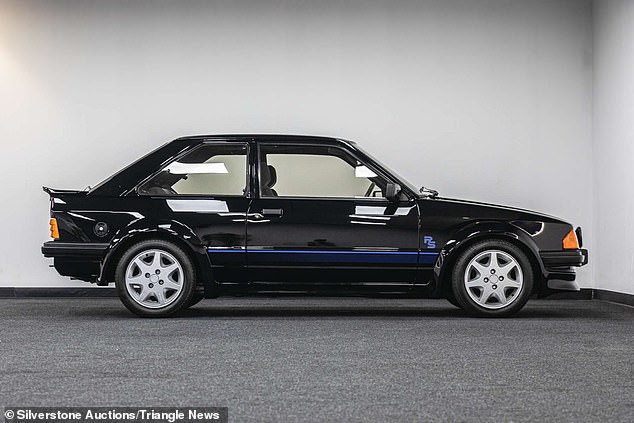 After being won on a radio station competition in the 90s, the car, pictured, was privately owned for a number of years before becoming part of a Ford RS collection, where it has been kept in ‘top condition’ 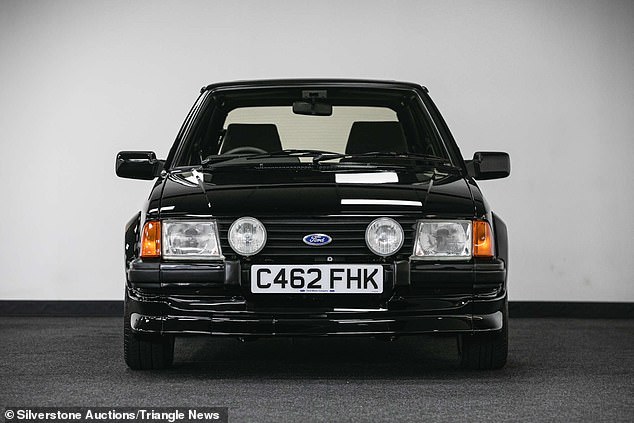 The stealthy, black Escort RS Turbo was insisted on by the royal and was given a special “stealth makeover” by Ford’s Special Vehicle Engineering department

The car would have been driven by the Princess with a detective in the passenger seat. It will go under the hammer at Silverstone Auctions, in Leamington Spa, on August 27.

The auctioneers continued: ‘Parallels could be drawn with the RS Turbo’s reputation as the People’s Sports Car and the honorific of People’s Princess bestowed by the British public on Princess Diana.

‘The RS Turbo was never designed to be driven by the wife of the second in line to the British throne nor to transport the future King.

‘We note with interest that whilst Diana’s later choice of luxury cars may have been more expensive when new, but the Ford Escort RS Turbo far outperforms them at auction, selling in some cases for three times the price of equivalent models.’

The 132 horsepower Ford was a replacement for her previous Escort – which was red and had a canvas folding roof.

SO14, the royal protection service, made her change this because it gave her little privacy and no protection. 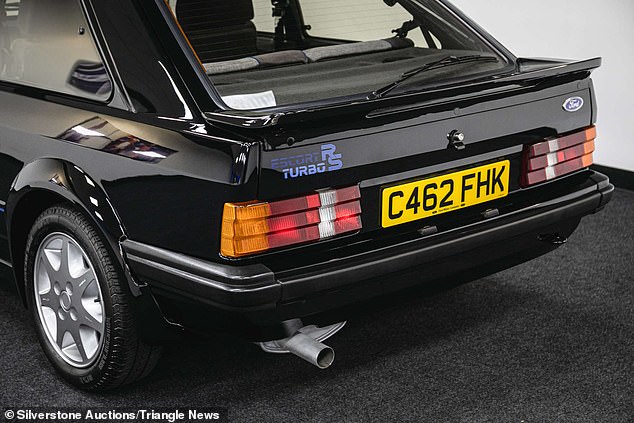 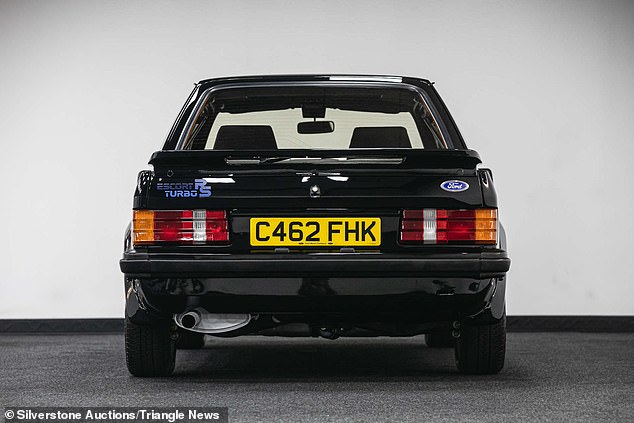 The historic hot hatch was driven by the People’s Princess from 1985 to 1988, during the early years of Prince Harry and Prince William’s childhoods 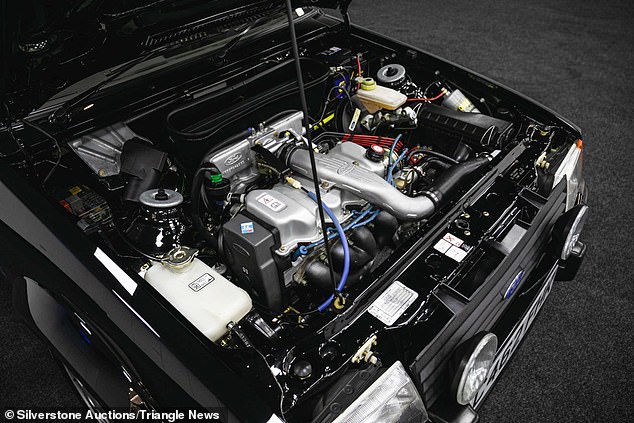 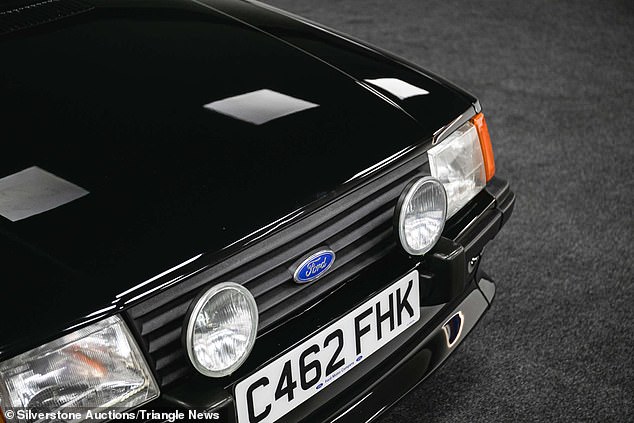 The royal protection service, made her change her red convertible Ford Escort because it gave her little privacy and no protection at the height of the IRA’s terror campaign

The stealthy, black Escort RS Turbo was insisted on by the Diana and was given a special ‘stealth makeover’ by Ford’s Special Vehicle Engineering department.

It was given a regular five-slat front grille, rather than the usual three, and a second rear view mirror for the protection officer with a radio in the glove box.

But it was still delivered with the blue RS striped decals and front fog lamps.

It is thought that the Ford provided a break from her official duties and would have been used for meeting girlfriends for lunch or nipping to the shops. 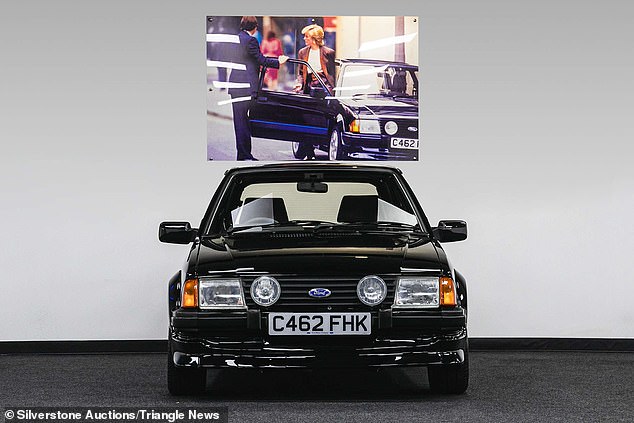 Much less flashy than her later cars, mother-of-two of-two Diana shunned the Royals’ Rolls-Royces and Daimlers for the modest Escort Turbo, pictured 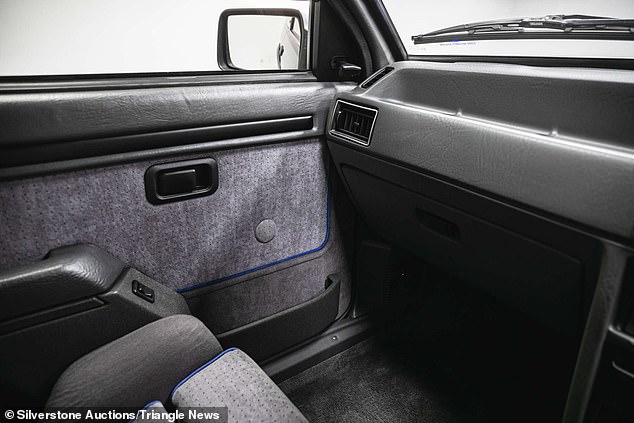 The Ford Escort’s interior, which is in pristine condition decades on from it’s initial use over 35 years ago 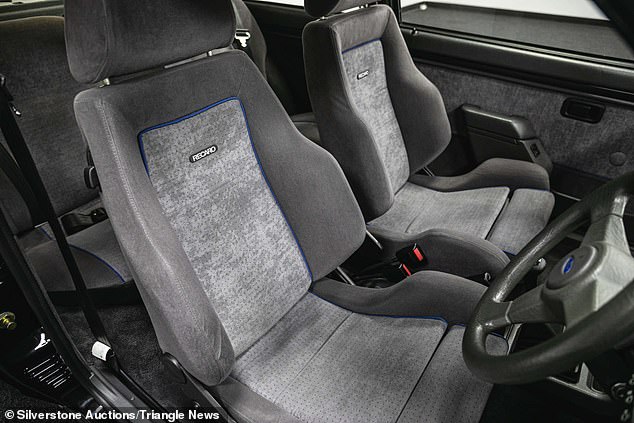 The seats where  Diana would have sat with a detective for protection while out and about seeing friends. It is assumed the car was used for more casual social occasions 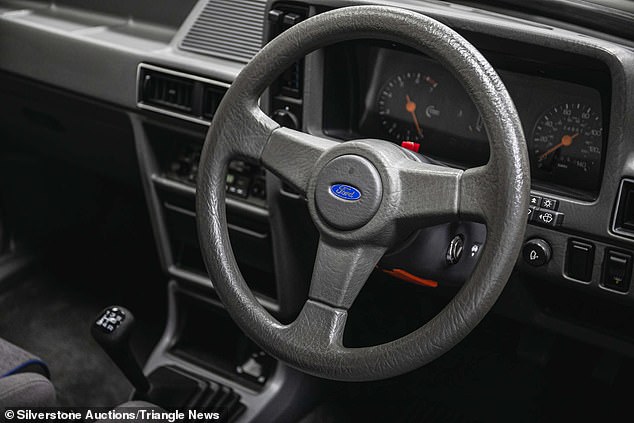 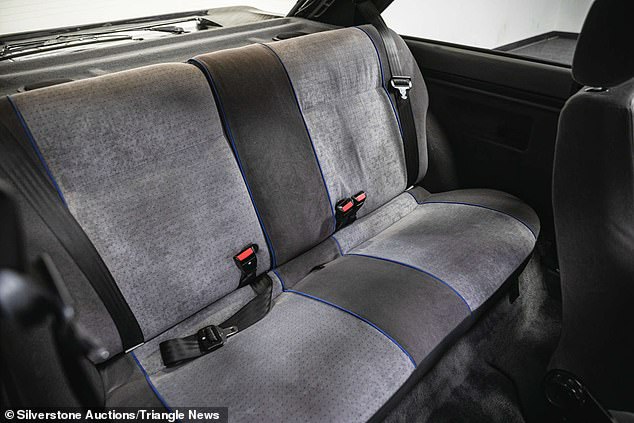 The back seats of the famous Ford, possibly where Diana’s close friends sat on outings with her

Silverstone Auctions Classic Car Specialist Arwel Richards said: ‘We have sold a number of motorcars that have had a Royal pedigree but this car ticks every box in terms of history, rarity, condition and mileage. The market adores early Ford RS models.

‘When Royal cars come to auction they’re usually Rolls-Royces or Range Rovers so to offer the very best example of the working class hero’s sports hatchback with such provenance is perhaps unique and therefore very exciting.

‘Isn’t it fascinating that the Escort RS Turbo was to be synonymous with the white stilettos of Essex but it’s first champion was the most glamorous woman on earth?’

After Diana, the car was bought for modest £2,638 by Ford manager Geoff King for his wife.

In September 1993, it was part of a promotional giveaway by radio station Kiss FM and won by a Miss Jones of Essex.

It was then owned from 1994 to 2008 by a Mr Windsor before being added to one of the best Ford RS collections in the UK. 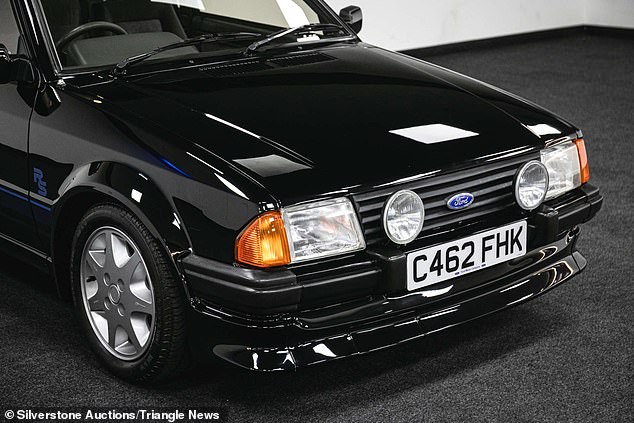 The princess had a love for fords and was bought a Ford Escort Ghia in Silver as a present by Prince Charles, the car was famously used by Diana during her days working at a nursery 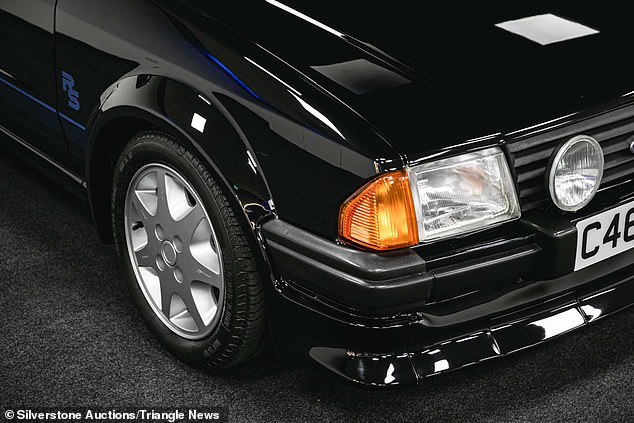 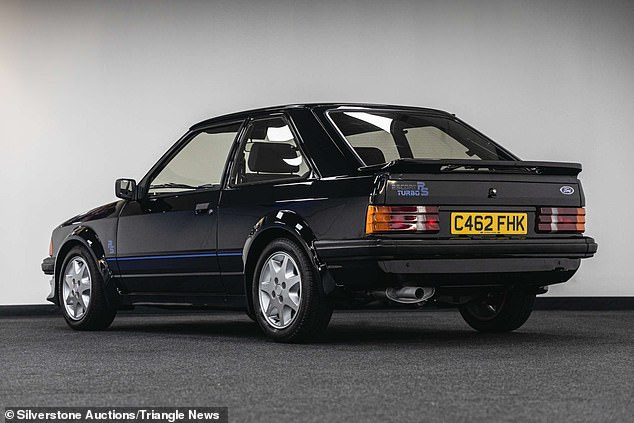 The Ford was a ‘stealth version’ of Diana’s original Red Ford Escort, which had a folding roof 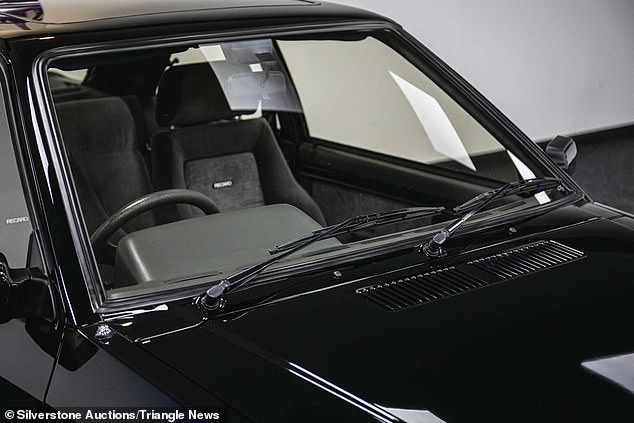 The vintage car, driven by global icon Princess Diana, is a blast from the past but looks brand new in auction photos

With less than 25,000 miles on the clock, the car is in exceptional condition and comes with a Lifetime Tracker, a spare key, Ford internal memos and the car’s registration documents.

Princess Diana’s  was commonly pictured in another Ford, a 1981 Ford Escort Ghia Saloon that was up for auction last  as part of a specialist Royalty auction after having disappeared from public view for over two decades.

The Ford Escort Ghia in Silver was the car given by Prince Charles to his fiancé as an engagement present in May 1981, two months before the Royal Wedding and used by her until August 1982.

It was reportedly owned by a female who’s identity was withheld, and she upkept the condition of the car including a silver frog mascot on the bonnet which was a copy of a gift from Diana’s sister, Lady Sarah Spencer, to remind her of the fairy tale of a beautiful girl whose kiss turns a frog into a prince. 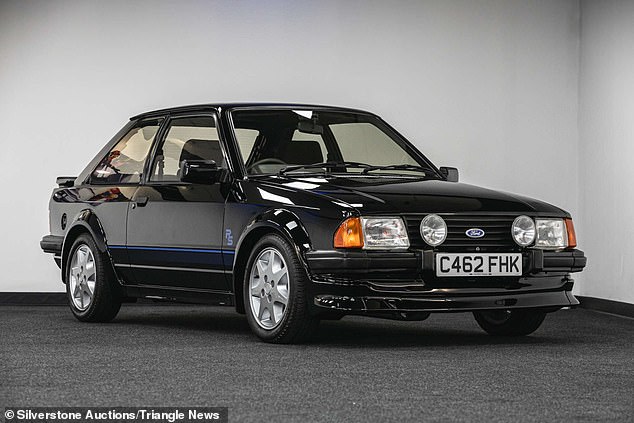 The ‘stealth car’ pictured, 25 years on from Diana’s death, with a glossy black exterior in excellent condition 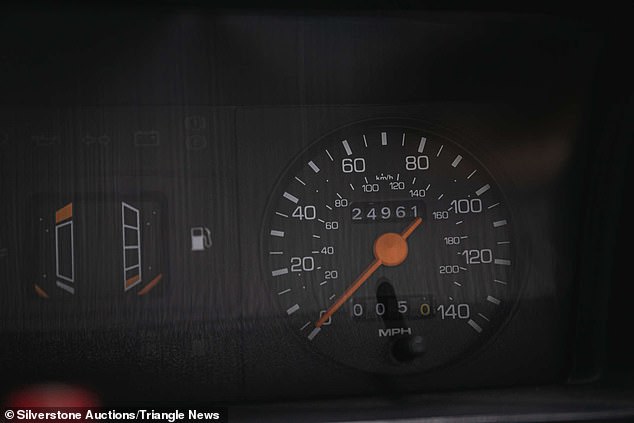 With less than 25,000 miles on the clock, the car is in exceptional condition and comes with a Lifetime Tracker