The Princess of Wales said she believed the late Queen was looking down on them when five rainbows appeared in the sky over Balmoral.

Kate, 40, made the comment as she and William thanked people who had worked to stage Queen Elizabeth’s funeral in Windsor.

It came as the Royals remarked at seeing the colourful weather phenomenon as they spent time in Scotland.

The Prince of Wales, 40, said the unusual sight had left them surprised, adding ‘In Scotland, how many rainbows turned up? You hardly ever see rainbows up there, but there were five.’ Kate smiled as she replied: ‘Her Majesty was looking down on us.’

The stunning skies seemed to say a last goodbye to the Monarch, on Sunday, who has been a central figurehead of the country for over 70 years, and Britain’s longest reigning monarch.

Elizabeth II was synonymous with Windsor Castle, where rainbows also appeared, and where she spent much of her time especially after the death of her beloved husband, Prince Philip, in April last year.

And the rainbows were seen also overhead the Queue, which has seen countless mourners lining up throughout the night to see the Queen lying in state.

Her Majesty also gave her name to the tower which holds the bell of Big Ben, which was renamed the Elizabeth Tower in 2012 to mark her Diamond Jubilee and also saw the stunning phenomenon.

It comes as rainbows were also spotted outside Buckingham Palace and Windsor Castle on the day of Her Majesty’s death, on Thursday, September 8.

Kate, Princess of Wales, and Prince William attended Windsor Guildhall this afternoon, three days after the funeral of Her late Majesty the Queen, to speak with staff and volunteers who helped organise and run the committal service at St George’s Chapel in Winsdor on Monday 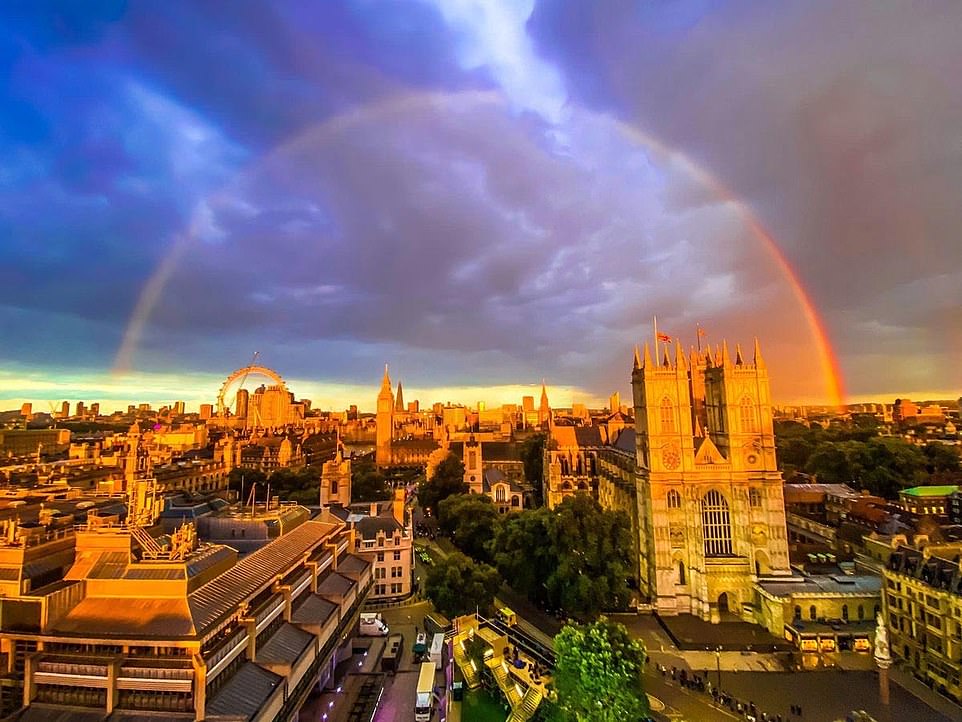 Nature’s own memorial: A rainbow appeared yesterday over Westminster Abbey and Parliament while Londoners revel at a stunning red sky over Big Ben 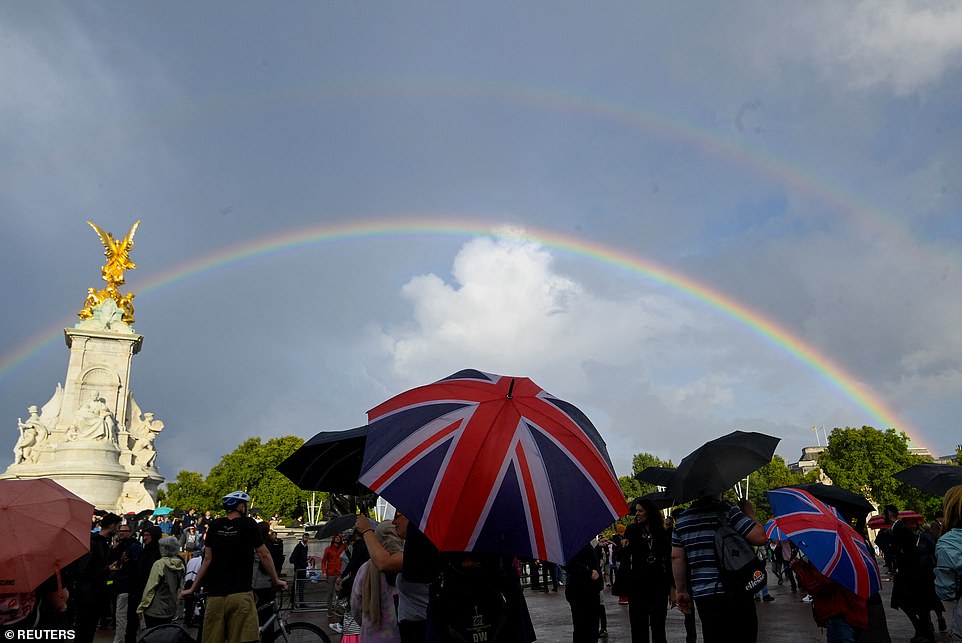 A rainbow also appeared when people gathered outside Buckingham Palace on the day the Queen died, aged 96, in Balmoral on Thursday, September 8 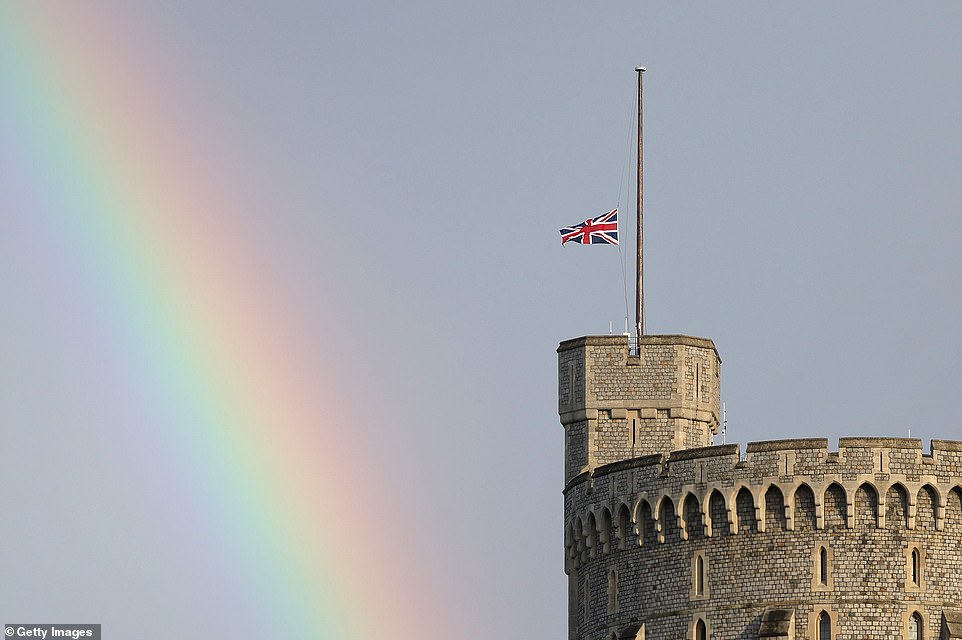 The Union flag is pictured being lowered on Windsor Castle as a rainbow covers the sky on September 08, when the Queen died 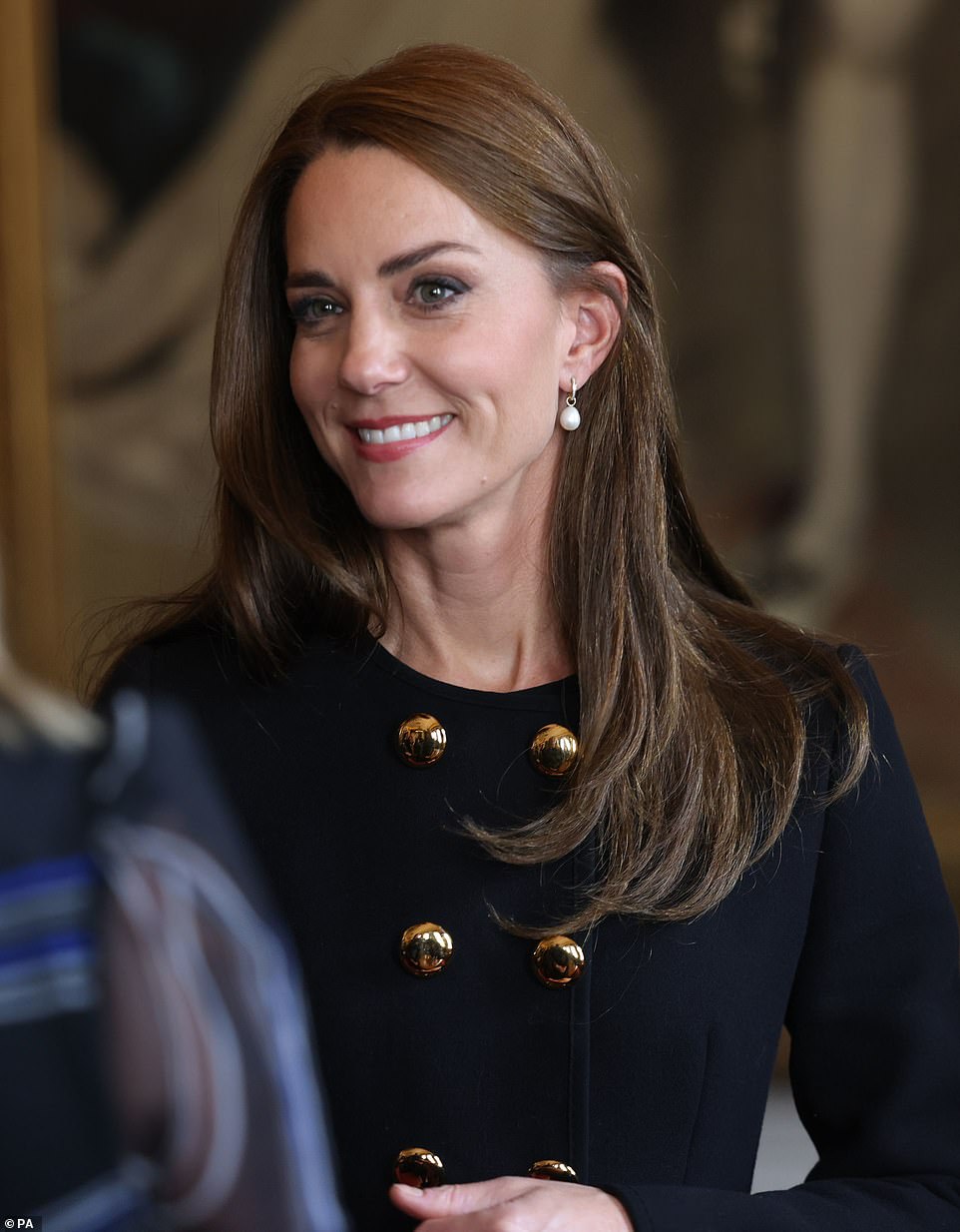 The Princess of Wales remained elegant and composed as she met with staff and volunteers and spoke to them about how they managed to organise a seamless, poignant ceremony to say farewell to Her late Majesty 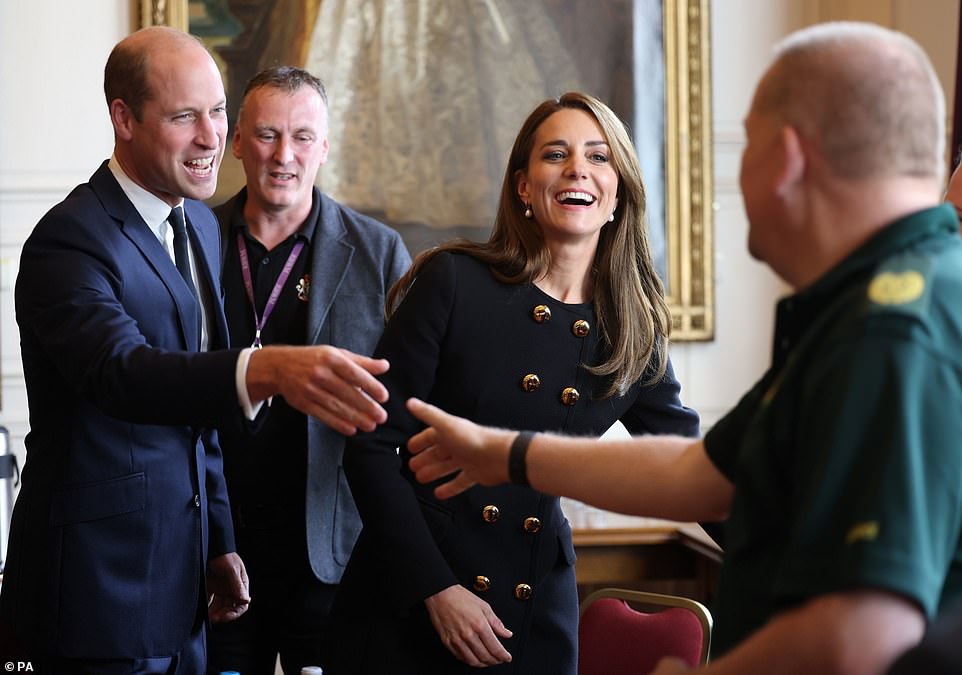 Kate appeared to duck out of the way as Prince William shook hands with a volunteer from St John’s Ambulance, who were on standby throughout the day to ensure the crowds of mourners were safe

It came as the Royal couple told volunteers and operational staff who helped to organise the Queen’s Committal Service that moments of sadness still caught him out.

They had arrived at Windsor Guildhall today to pass on their appreciation to volunteers and staff who worked on the service at St George’s Chapel – which followed Her Majesty’s state funeral at Westminster Abbey.

And during the engagement, which was the first in person engagement for the Prince and Princess of Wales since the state funeral, William said he found himself ‘choked up’ when he saw Paddington Bear tributes to his grandmother, but had found comfort in the public outpouring of support for the Royal Family.

He said: ‘It is the things you don’t expect that get to you,’ he said, adding that he got ‘choked up’ over the Paddington tributes. He went on: ‘It is always very comforting that so many people care. It makes it a lot better.

They also thanked the group for supporting the large crowds that gathered in Windsor to commemorate the Queen and watch the procession of her coffin up the Long Walk to the castle before the service. 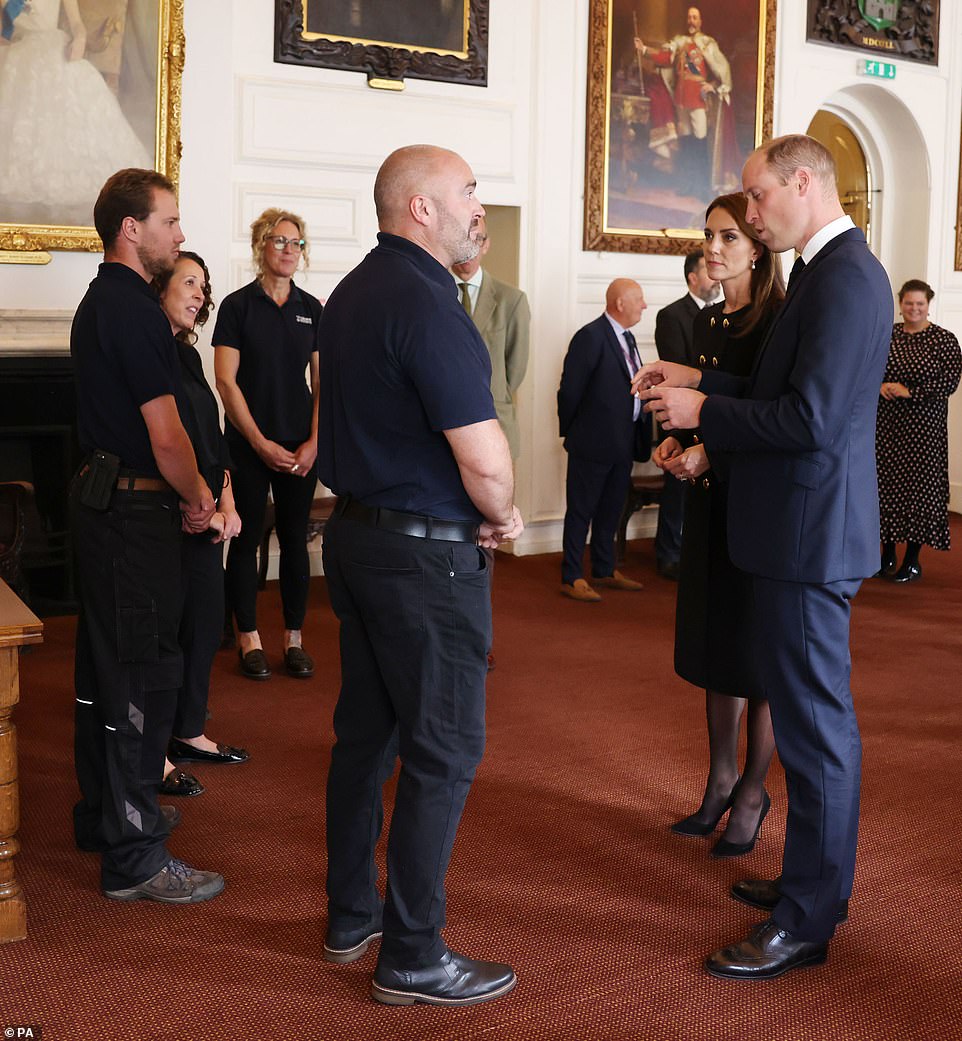 The Prince and Princess of Wales met with staff, who were also dressed in black to pay their respects to Her late Majesty during the period of mourning 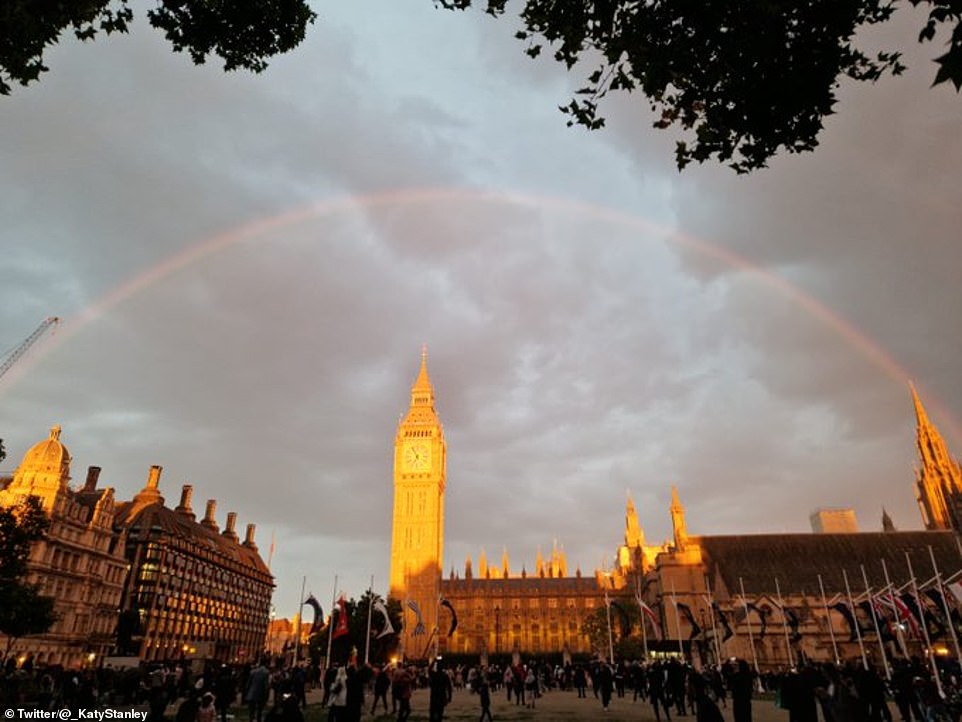 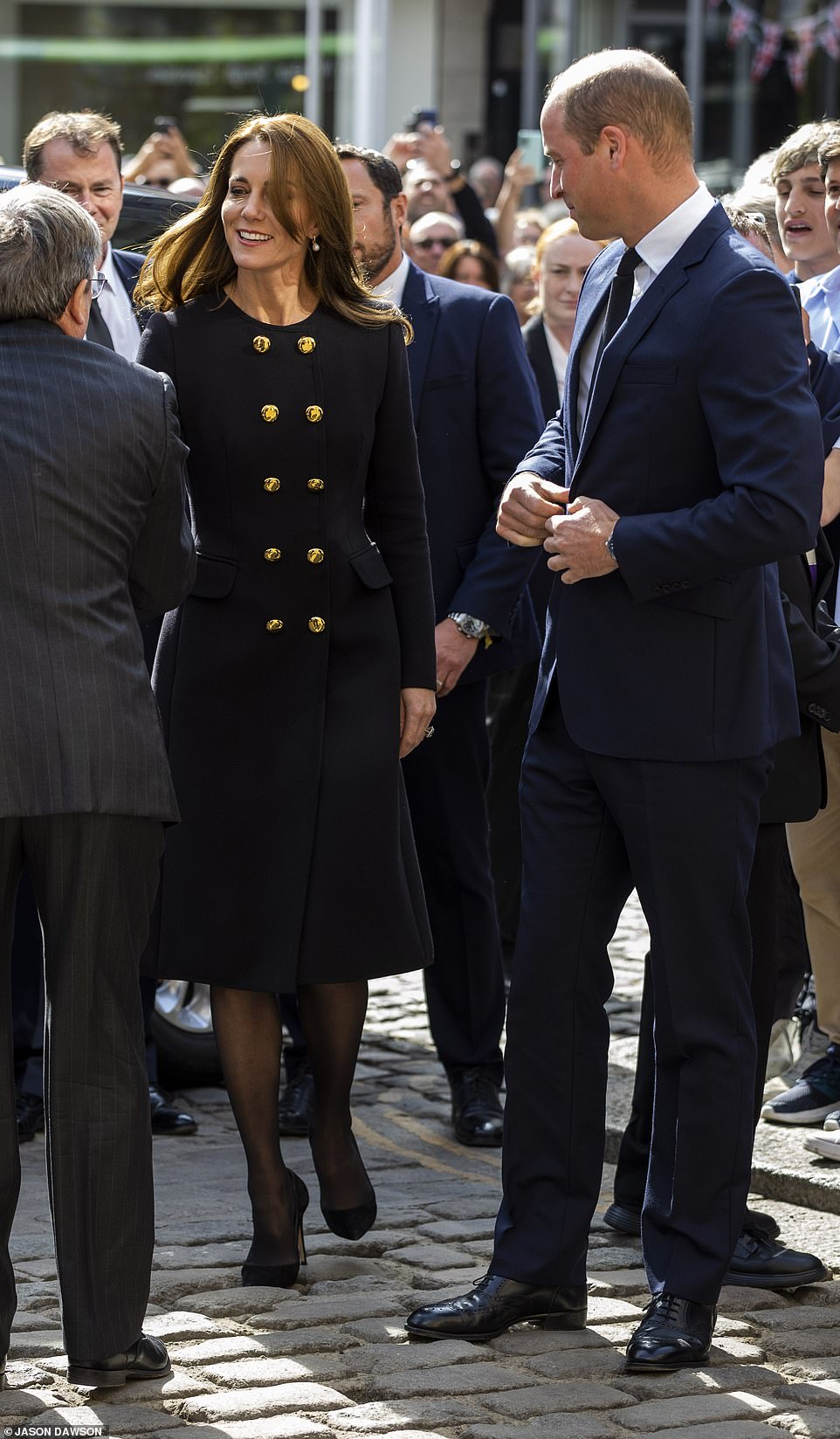 The Royal Family were not expected to carry out any official engagements during their mourning period, after more than a week of being under the world’s gaze while performing ceremonial duties following the Queen’s death.

But yesterday William made his first speech since his grandmother passed away with a pre-recorded address to the Earthshot Prize summit.

Buckingham Palace say a small number of engagements will be undertaken during royal mourning to thank those involved in the delivery of HM Queen Elizabeth’s Funeral.

Princess Anne, 72, has also stepped out at Portsmouth Naval Base, where she shook hands with Royal Navy personnel who took part in the procession.

It was her first engagement since attending her mother’s funeral on Monday.

Speaking to staff, the prince asked whether the Queen passing away at Balmoral ‘made it complicated’. He added: ‘I think I heard it was the ”least planned for plan”. It was seamless, you could feel it.’

William and Kate spoke of the extraordinary public response to the Queen’s death as they met with volunteers and workers who helped in Windsor on the day of the State funeral.

It was the couple’s first official engagement since the funeral on Monday, as several senior royals returned to their duties, while continuing to mourn for the Queen. 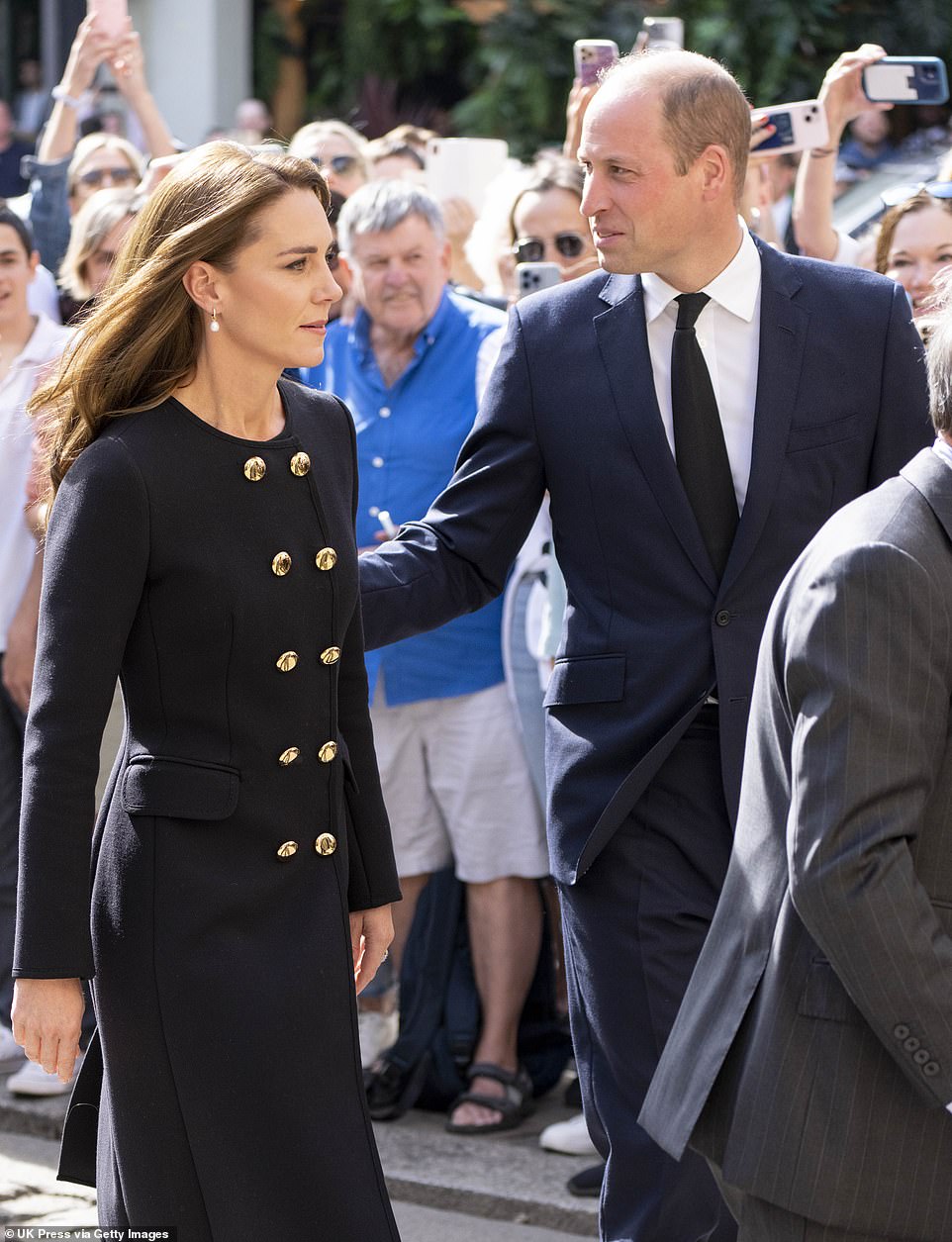 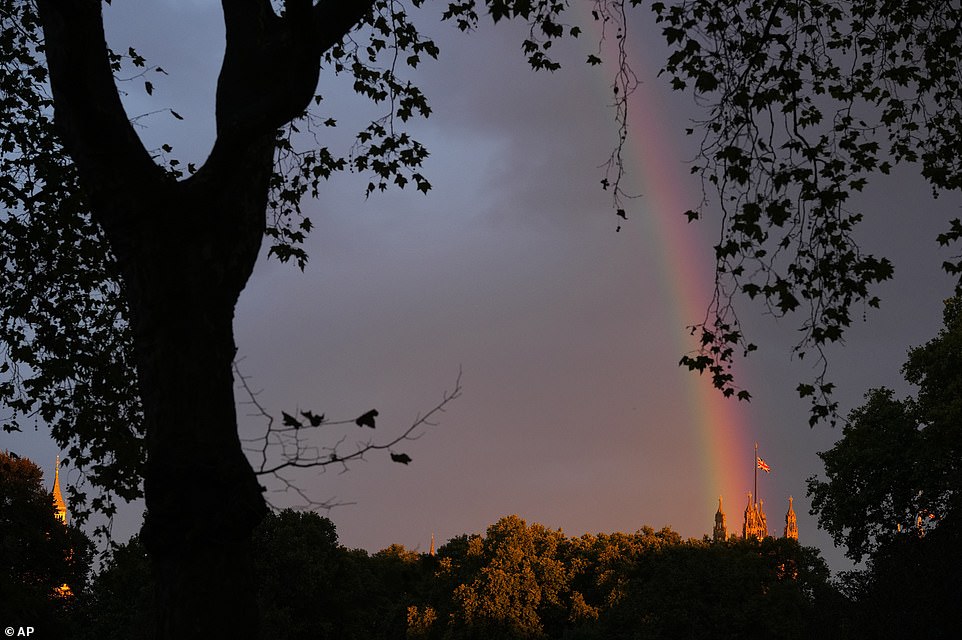 A rainbow is seen over the Big Ben on the eve of the funeral of Queen Elizabeth II, Britain’s longest-reigning monarch and a rock of stability across much of a turbulent century 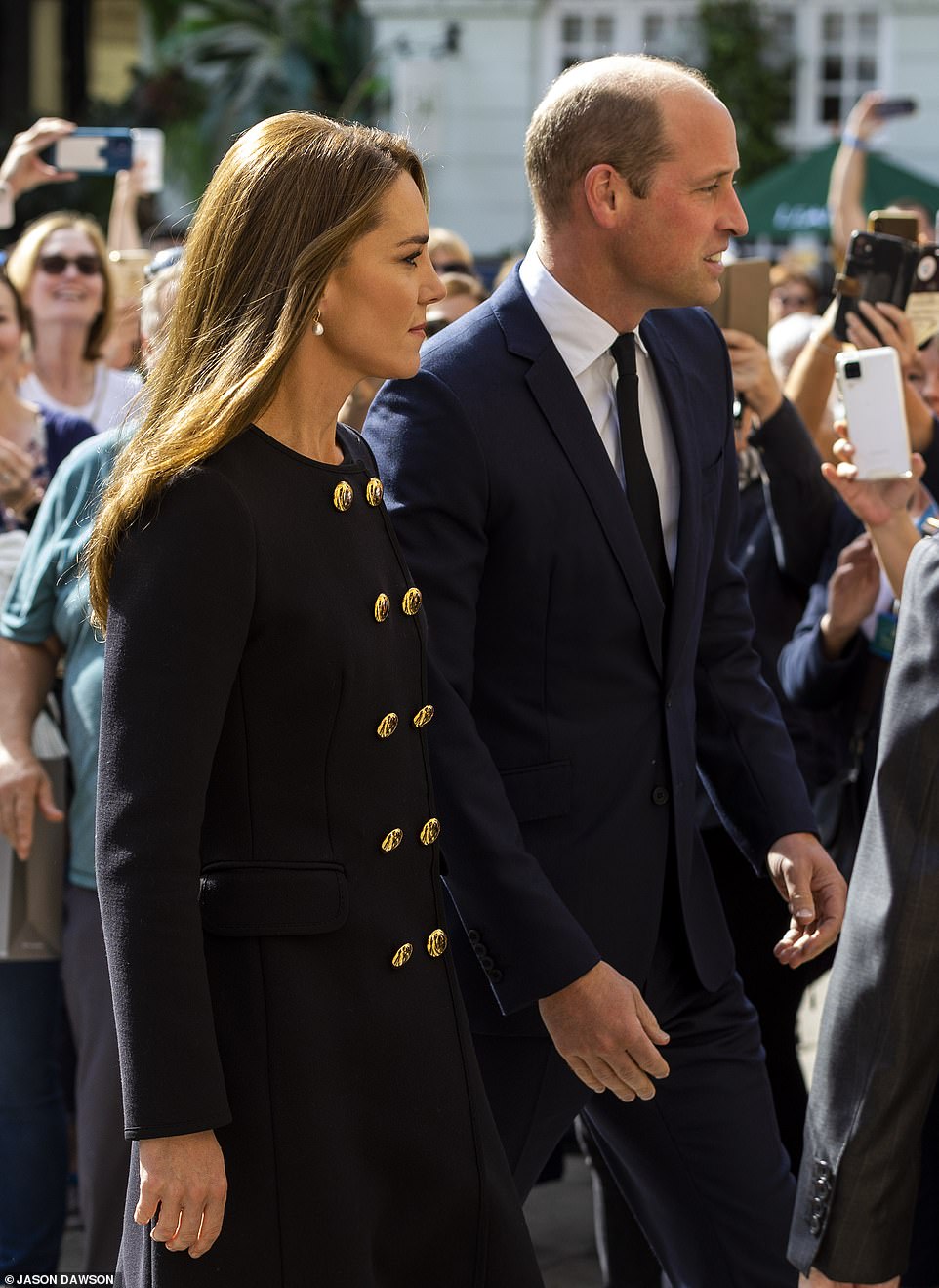 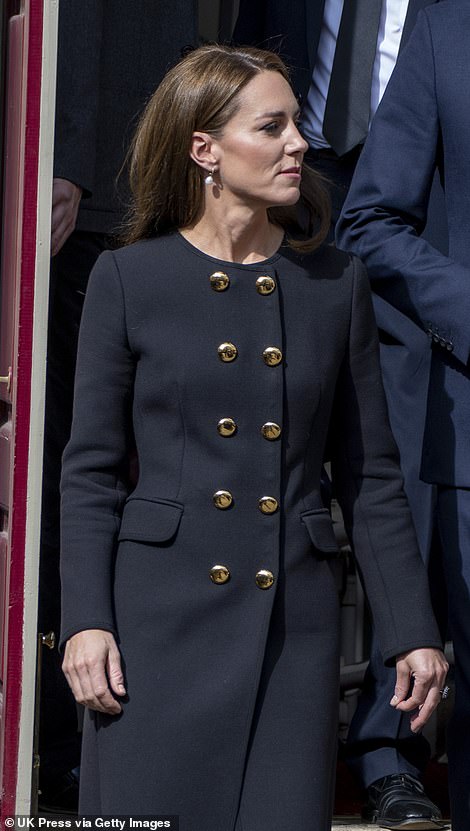 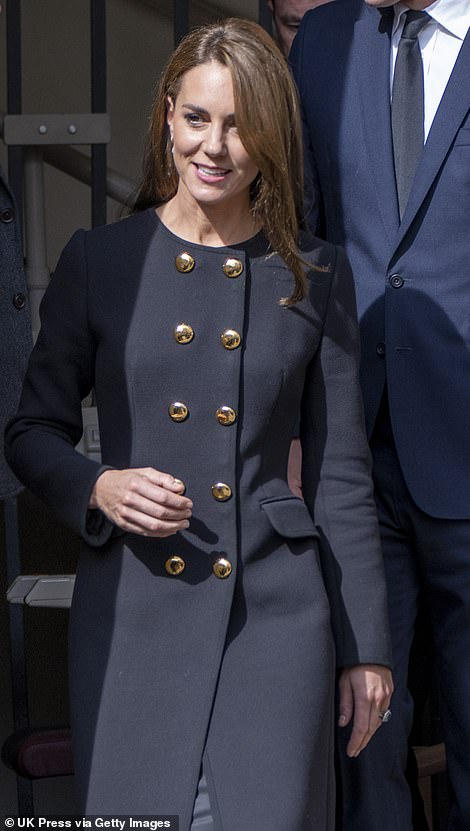 The Princess of Wales maintained the full black outfit as the family continues its period of mourning, but she smiled through her grief in order to thank the staff who ensured the Committal service was a fitting tribute to Her late Majesty 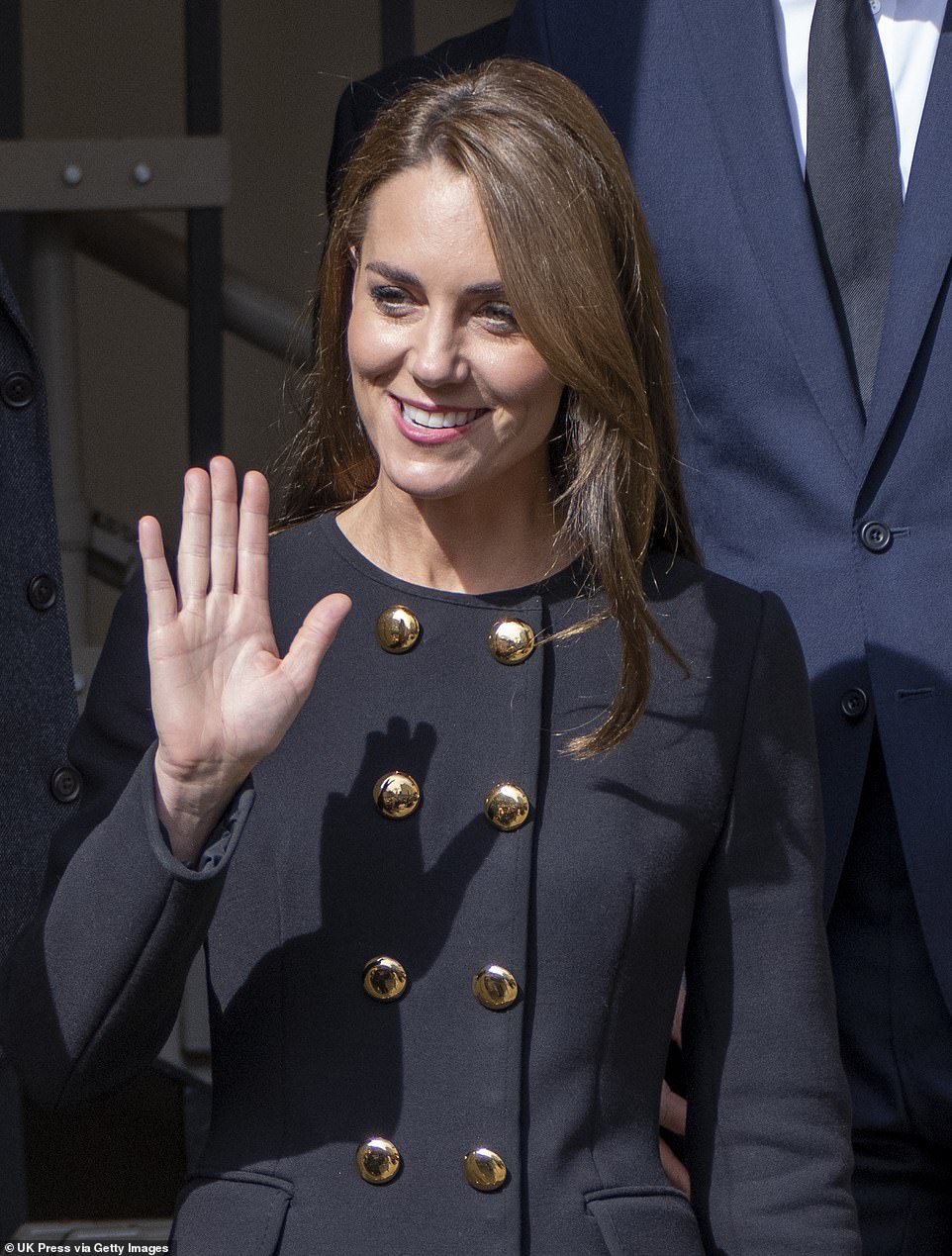 Kate waved as she left the meeting in which she and the Prince of Wales said a heartfelt thanks to the staff and volunteers in Windsor, in their first public engagement since the Queen’s funeral 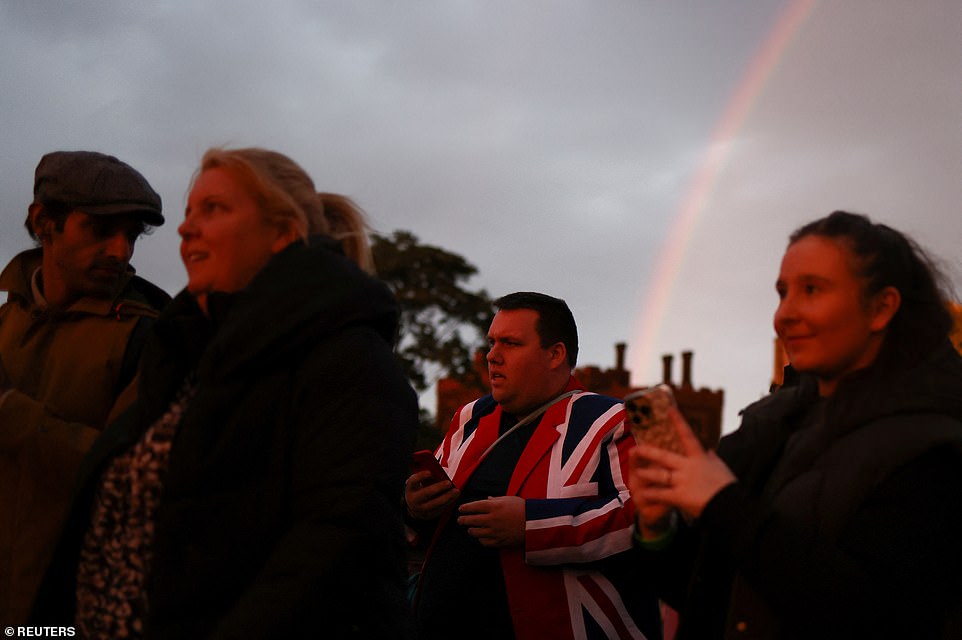 A rainbow forms as people queue to pay their respects to Britain’s Queen Elizabeth following her death, in London 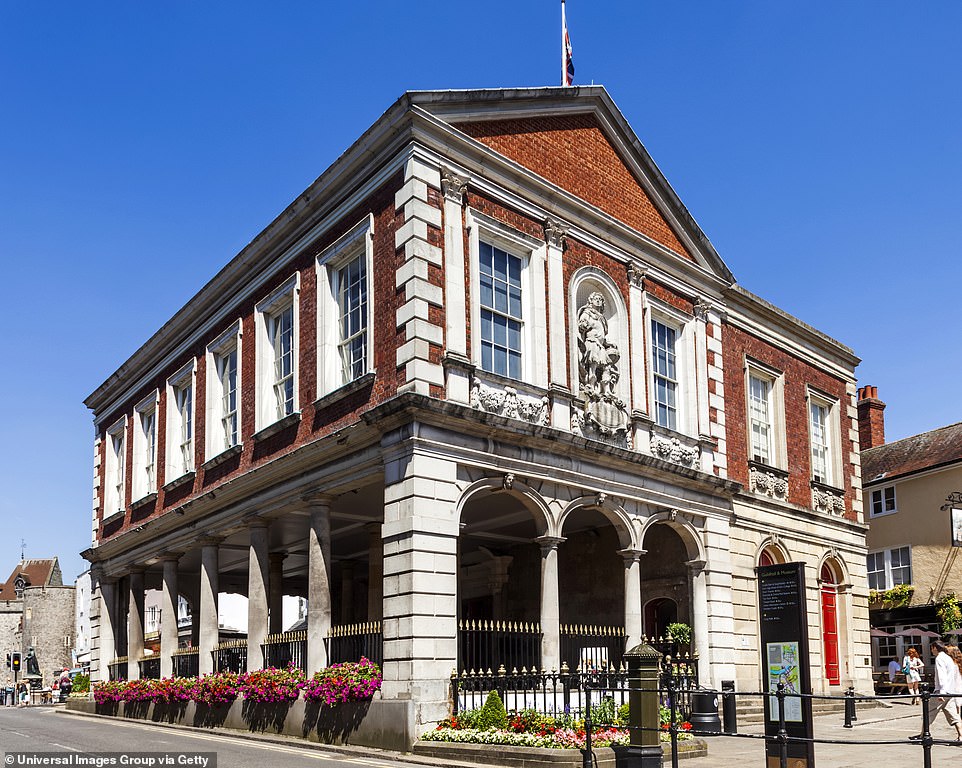 Windsor Guildhall, pictured, where Kate and William are speaking to volunteers and operational staff to thank them for their work on the Queen’s committal service at Windsor Castle 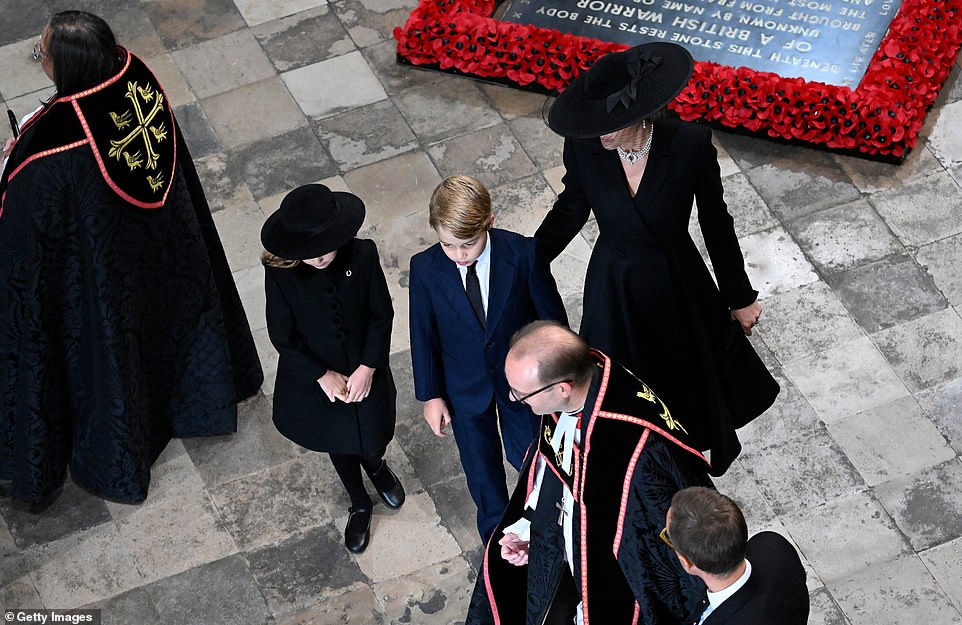 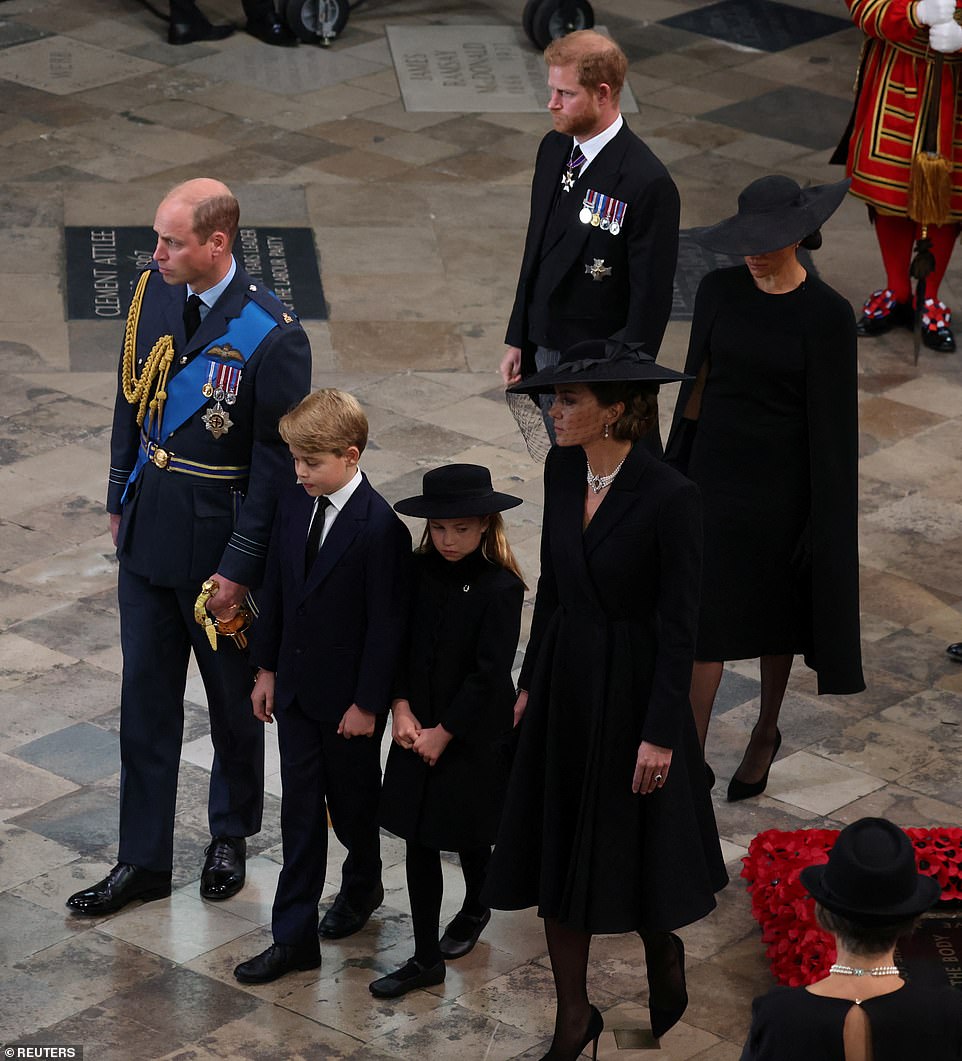 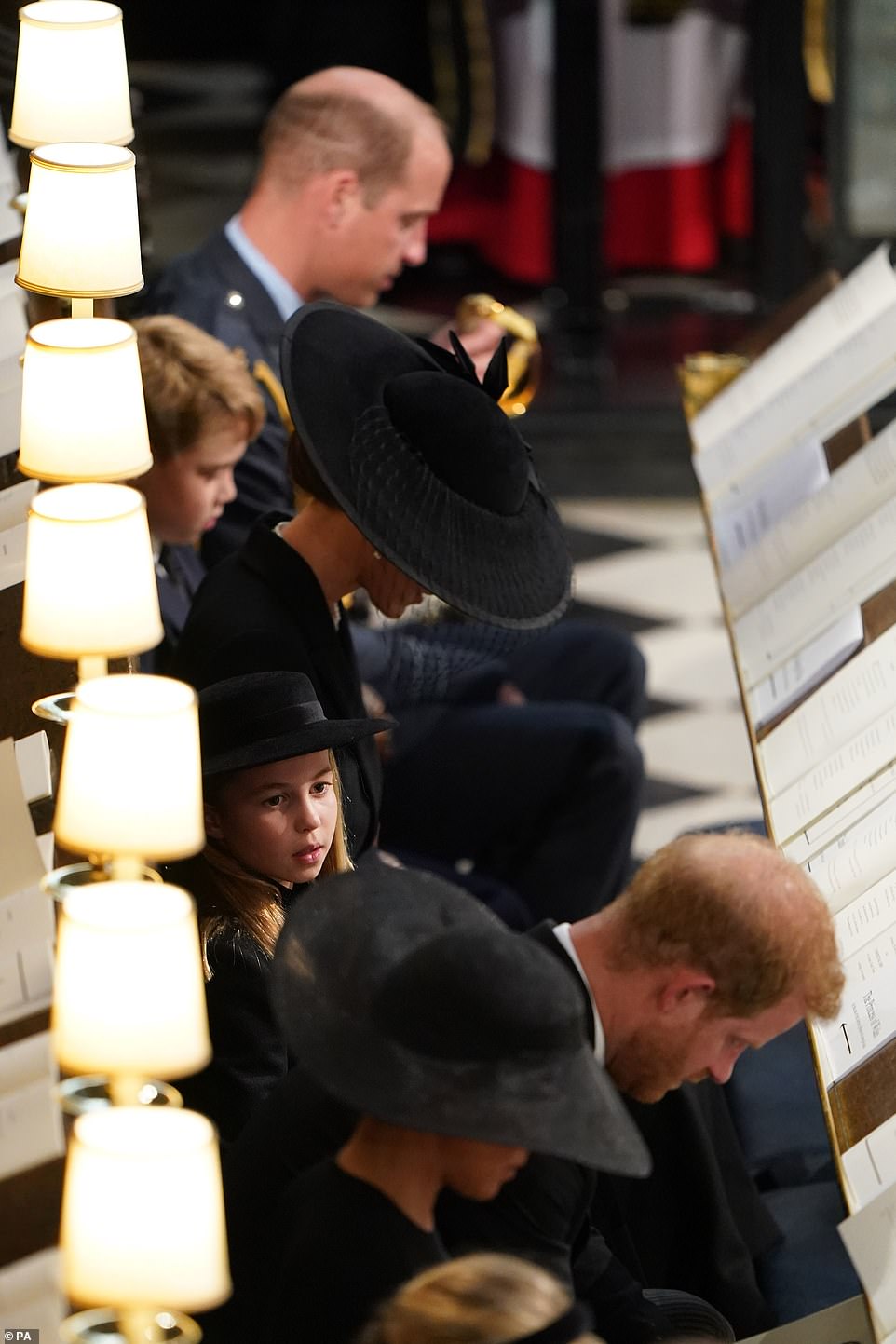 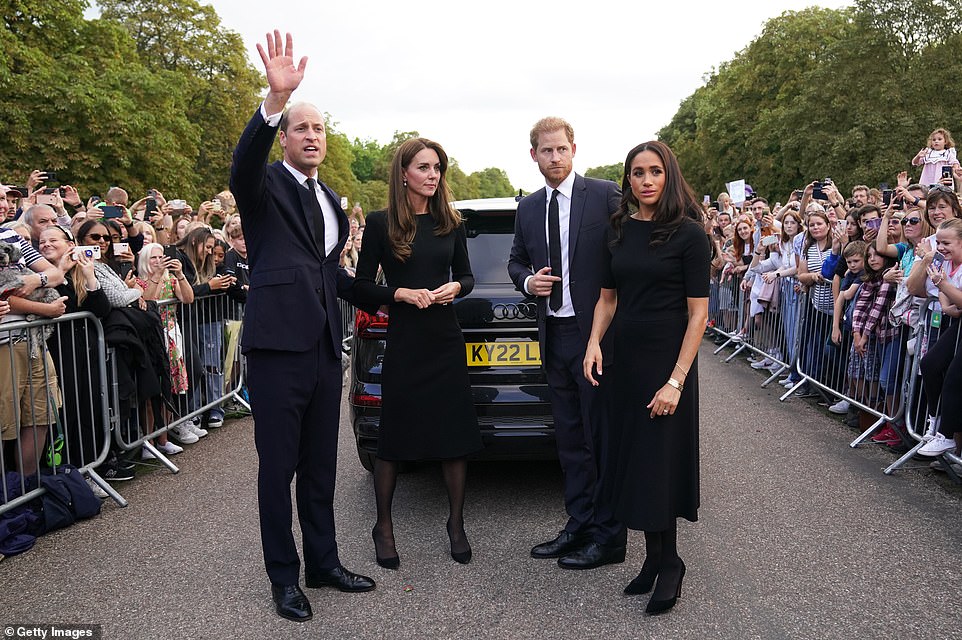 Kate spoke about seeing all the infrastructure like barriers going up along the roads ‘coming back and forwards from the school run’.

The group spoke about the number of people in the crowds, with one of the logistics staff saying it was about 110,000.

William said: ‘We did not see the whole town come to a standstill. That’s what we were worried about, that it would disrupt everyone’s lives.’

Later, when one of the staff talked about how difficult the last few days must have been, he said: ‘If you flip it on its head, it is always very comforting that so many people care. It makes it a lot better. There are certain moments that catch you out. You are prepared for all but certain moments catch you out.’

The engagement is one of their first since William became the heir apparent and became known as the Prince of Wales, after the death of his grandmother and the accession of his father, Charles, to become the King.