Prince Carl Philip of Sweden had great support at a motor racing event this weekend as his wife Princess Sofia and their two young sons were in attendance to cheer him on.

The Prince is a keen driver and was competing at the Porsche Carrera Cup at the Gelleråsen Arena in Karlskoga, Sweden, taking up a berth in a VIP guest car – a yellow Porsche 911.

While the 40-year-old slumped to a lowly 16th in one race and didn’t even finish the other, he was all smiles as he helped his wife with their adorable brood.

The Prince is a keen driver and was competing at the Porsche Carrera Cup at the Gelleråsen Arena in Karlskoga, Sweden. He is pictured getting ready to compete in one of the VIP cars 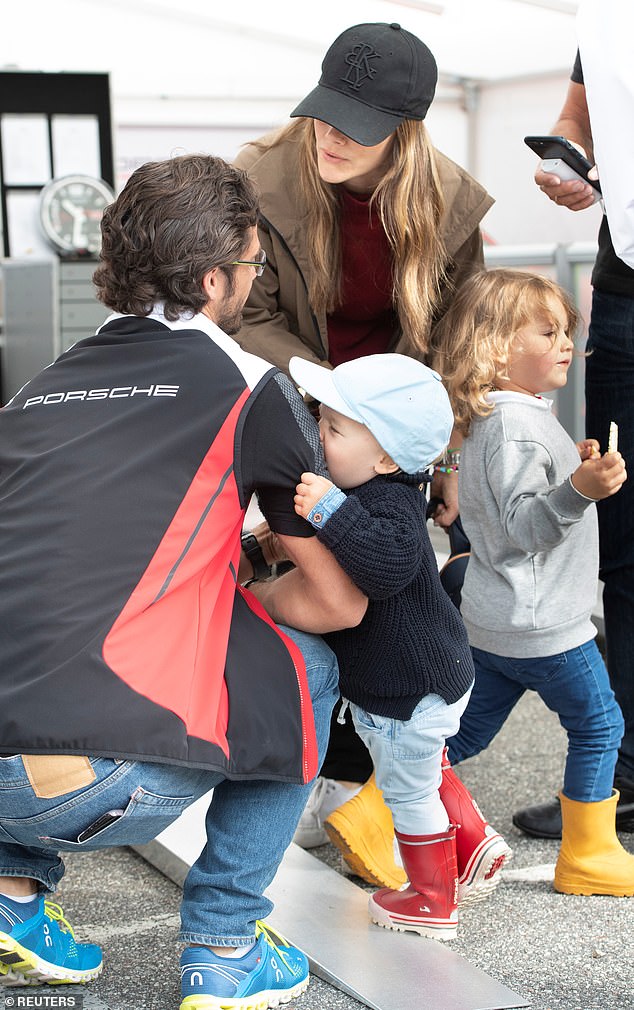 The youngsters – Prince Alexander, Duke of Södermanland, three, and his younger brother Prince Gabriel, Duke of Dalarna, who turns two at the end of this month – both sported cute wellies as they watched their father race.

Playful Prince Alexander shot a huge smile and pointed at the camera when he spotted it during the event.

He was also pictured being helped by his mother, Princess Sofia, 34, with his backpack.

The princess cut a casual figure, wearing her hair down and straight and donning a black baseball cap with her red turtle-neck top and black skinny jeans. 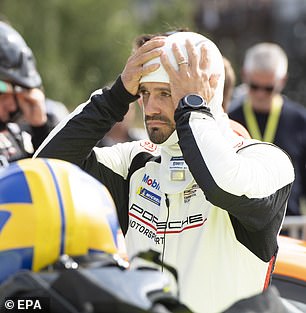 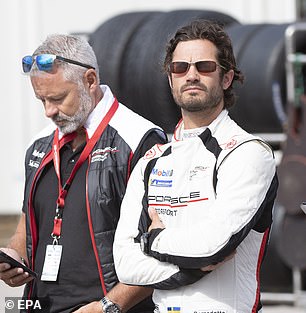 Prince Carl Philip of Sweden, the only son of Swedish King Carl Gustav and Queen Silvia, has previously competed as a racing driver in various touring car championships 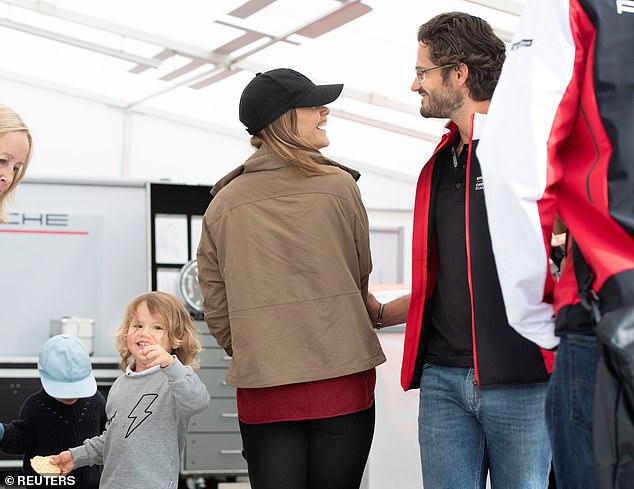 Sweden’s Princess Sofia with Prince Carl Philip and their son Prince Alexander – who clocks the camera –  at the Gellerasen race track in Karlskoga, Sweden this morning 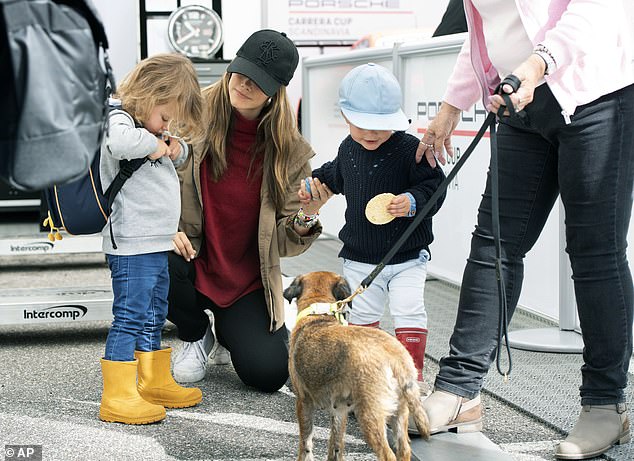 The youngsters, Prince Alexander, Duke of Södermanland, three, and his younger brother Prince Gabriel, Duke of Dalarna, one, sported wellies as they played with a dog 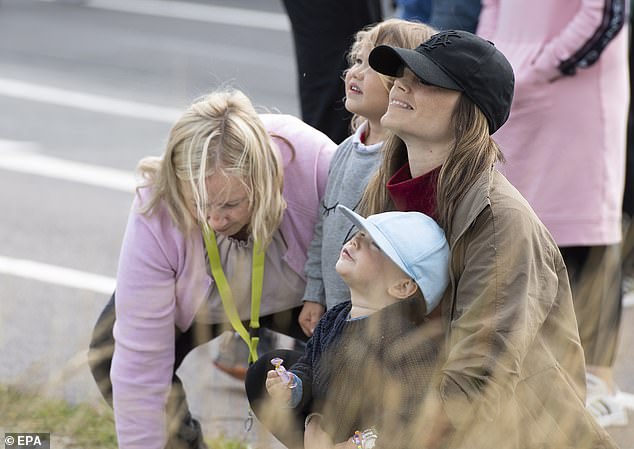 Princess Sofia (right) and her sons Prince Alexander (centre, background) and Prince Gabriel (front) watch a helicopter flying at the the Gellerasen Motor arena in Karlskoga

Before donning his racing gear, Sofia’s bespectacled husband wore a racing jacket with the Porsche insignia to go with his blue jeans.

The only son of the king and queen of Sweden and fourth-in-line to the throne is a regular racer, having contested the Carrera Cup, Scandinavian Touring Car Championship and Porsche’s GT3 Cup Scandinavia, which he won the GT Endurance element of in 2010, according to Autosport.

He was also pictured earlier this month at the Lidkoping Open Carting Competition in Linkoping, Sweden. 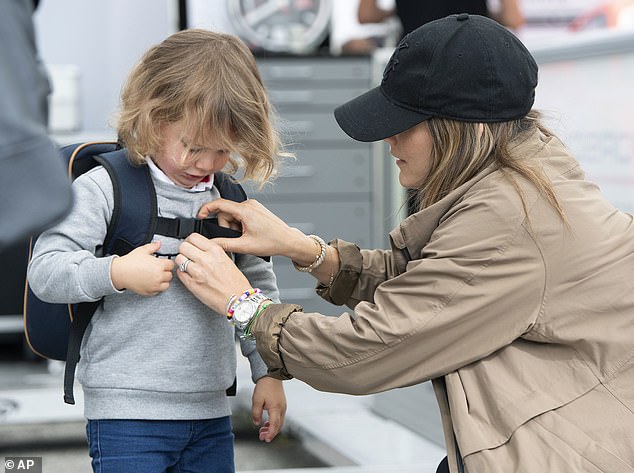 Sweden’s Princess Sofia helps her son, Prince Alexander, with his backpack. The young prince was watching his father compete in the Porsche Carrera Cup at the Gelleråsen Arena in Karlskoga

He went up against several high-profile racers in this weekend’s event in Karlsoga, around 235km west of the capital, Stockholm.

Among them was ex-Formula 1 world champion Jacques Villeneuve, who placed 11th in the official test – just five places above the prince.

Villeneuve placed 16th out of 17 in the first race of the day – one that the prince didn’t manage to finish. 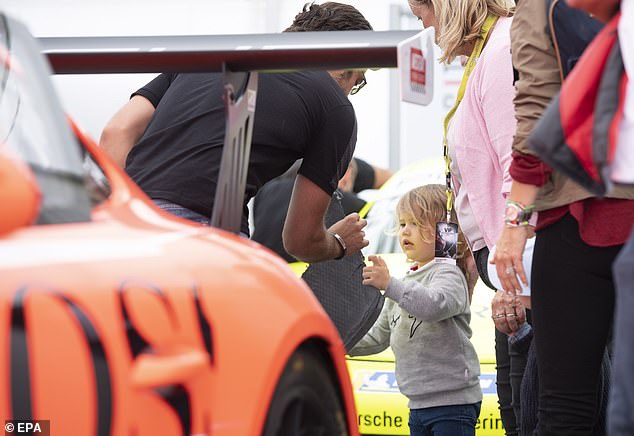 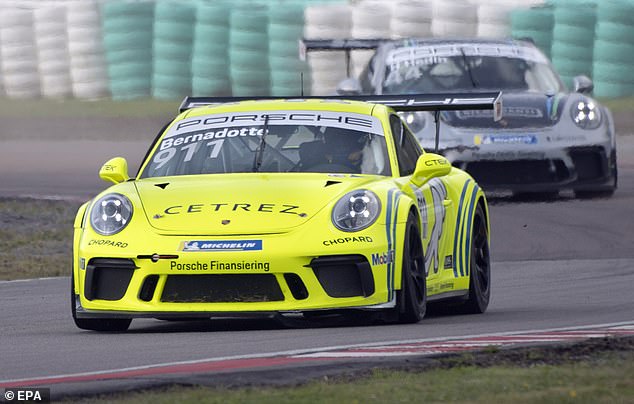 Prince Carl Philip of Sweden, in a yellow Porsche marked with the number 911 and the name Bernadotte, competes in the Scandinavian Porsche Carrera Cup 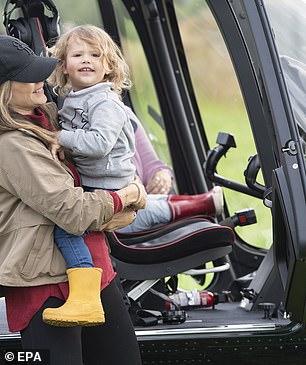 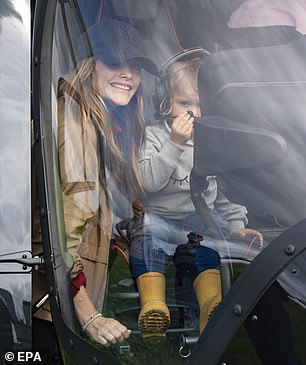