Princesses Beatrice and Eugenie oozed style and radiance as they joined A-list celebrities including Mick Jagger and Matt Smith for a Christmas party held by Russian tycoon and owner of the Evening Standard Evgeny Lebedev last night.

The daughters of Prince Andrew and Sarah, Duchess of York, appeared in high spirits as they made their way towards the swanky event in the capital on Friday.

Beatrice, 31, who was accompanied by her fiancé Edoardo Mapelli Mozzi, 34,  sported a stylish cream coat that featured black collars as she joined the rich and famous for a night of celebrations.

Princes Beatrice, 31, oozed style and radiance as she made their way to a Christmas party held by Russian tycoon and owner of the Evening Standard Evgeny Lebedev

The royal teamed her stylish garment with a pair of black boots and a swanky black bag as she made her entrance to the event.

Sweeping her locks back into a ponytail, the princess accessorised her look with her dazzling silver engagement ring and a single gold bracelet on her wrist.

Joining his soon to be wife was fiancé Edoardo who looked dapper in a blue suit paired with a spotted blue tie underneath a black coat as he joined Beatrice for the glamorous event.

Meanwhile sister Eugenie, 29, looked beautiful in a sparkling knee-length black coat that cinched in at the waist as she made her way to the elite party in the capital.

Letting her brunette locks cascade down her shoulders, the princess accessorised her look with a black bag slung across her shoulder and a pair of knee-length boots that featured a zip along the side.

Meanwhile sister Eugenie, 29, looked beautiful in a sparkling knee-length black coat that cinched in at the waist 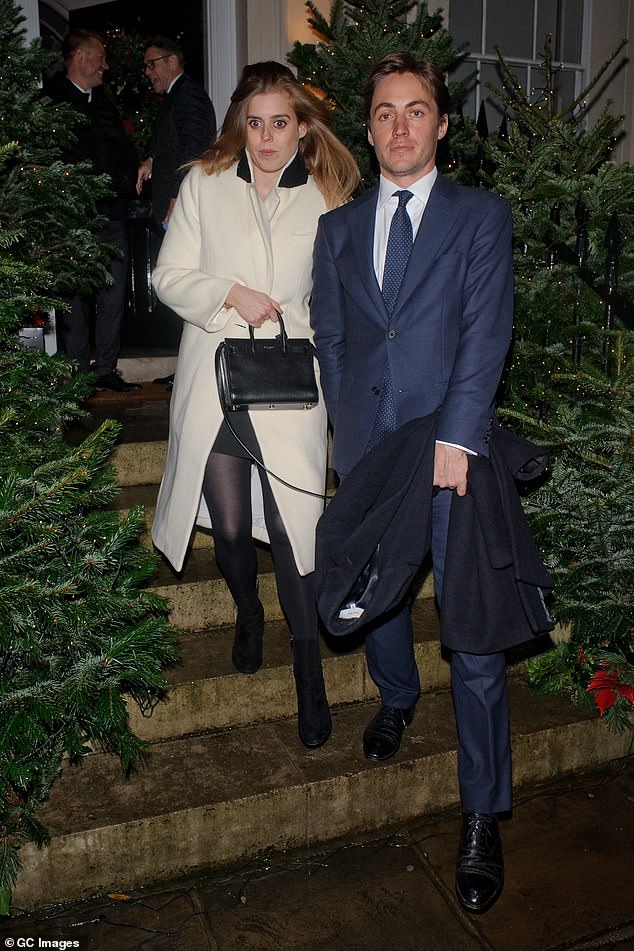 Beatrice, who was accompanied by her fiancé Edoardo Mapelli Mozzi (right), 34, sported a stylish cream coat that featured black collars

The princess, who was all smiles as she made her entrance, completed her appearance with a touch of eyeliner ad mascara to her eyes.

As the princesses made their public appearance, their father Prince Andrew remained in Windsor where earlier today he was spotted riding.

The prince has tried to stay out of the limelight after allegations emerged that he had an encounter with one of Jeffrey Epstein victim’s Virginia Roberts Giuffre  when she was aged 17 in London in March 2001.

Andrew denied in a interview on BBC Newsnight that he slept with Miss Roberts, on three separate occasions, twice while she was underage under US law.