A tiny slab of Australian outback that declared independence 50 years ago will finally rejoin the rest of the nation.

The Principality of Hutt River was dramatically created on April 21, 1970, and covers just 75sqkm of remote Western Australia with a population of 23.

The ‘micronation’ has its own flag and emblem and produces stamps, banknotes, and coins featuring its founder Leonard Casley and his ‘royal family’.

But just 18 months after Prince Casley’s death aged 93, his son Prince Graeme has had to give up his father’s dream ‘with much sorrow’.

Leonard Casley, known as Prince Leonard of the Hutt, died on Wednesday at the age of 93, almost 50 years after declaring independence from Australia on April 21, 1970 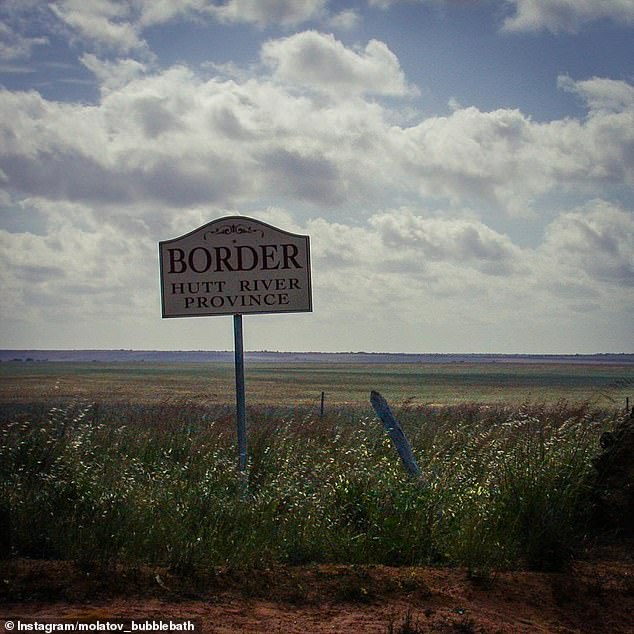 The border between Australia and the Principality where more than 40,000 tourists from around the world cross every year

He admitted a $3million tax debt made the Principality’s ‘independence’ unsustainable, and the land would have to be sold to cover it.

The former grain and sheep farm is expected to be listed for sale within days.

Hutt River, about 500km north of Perth and accessible only by a long dirt track, survived for five decades by attracting more than 40,000 tourists visit every year.

They paid $4 at the border for a ‘visa’ a passport stamp alongside the one they got when they landed at an Australian airport.

But the Principality was forced to shut its borders at the end of January because of the coronavirus pandemic, destroying its main source of income.

The once-proud unrecognised country will now be turned into farmland and its treasures and archives put in storage. 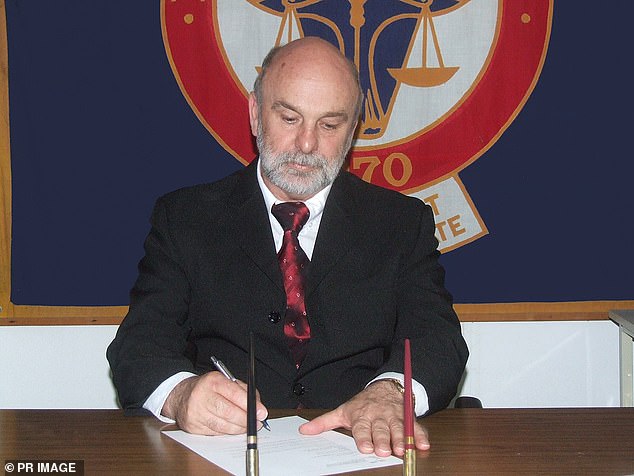 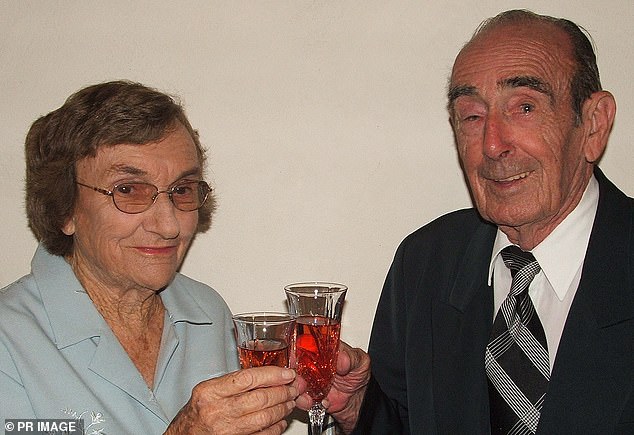 Prince Leonard with his wife Princess Shirley, who were married for 66 years before her death in July 2013

‘His Highness has informed me that the Government of the Principality of Hutt River has decided to dissolve the Principality, which will, once again, become part of the Commonwealth of Australia,’ he wrote.

‘While this period as an independent nation has come to an end, all those of us who have served the Principality, over the last 50 years, look back on this history with pride.

‘Being part of the unique experiment that was the Principality of Hutt River has been a great privilege, I have met wonderful people and helped good causes.

‘While PHR is gone it will not be forgotten.’ 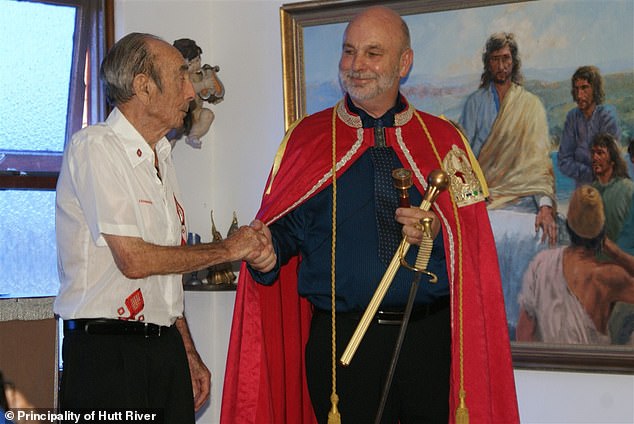 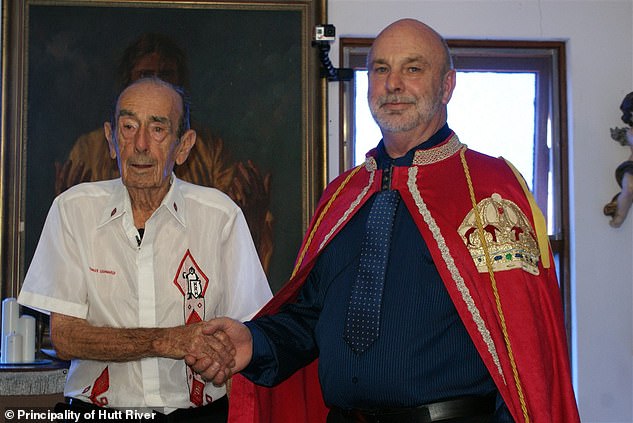 Prince Leonard had for a half century defended his patch of outback against government attempts to force him out, and refused to pay a single dollar of tax.

His demesne was formed in 1970 during a bitter dispute with the WA Government over wheat production quotas established in November 1969.

Rather than have his livelihood slashed by 90 per cent, he declared his farm independent and no longer subject to Australian law.

This meant he refused to pay tax on money earned within the Principality’s borders, but the Australian Tax Office disagreed. 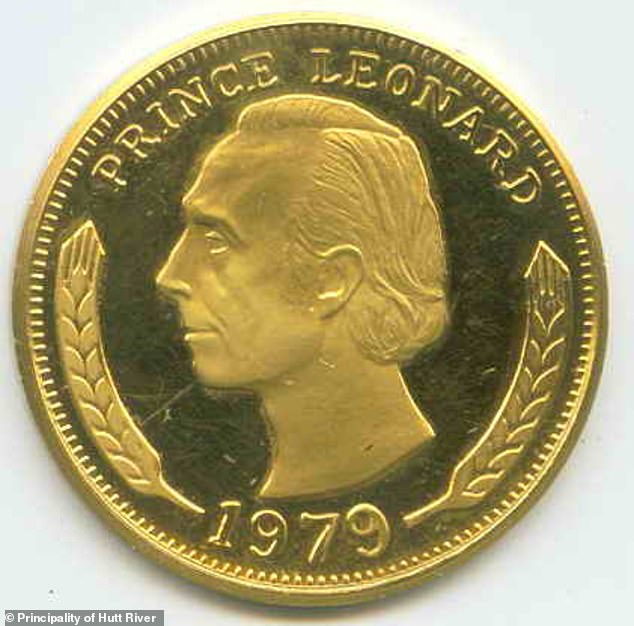 The Principality issues its own coins, bearing the image of Prince Leonard, which are legal tender within its borders 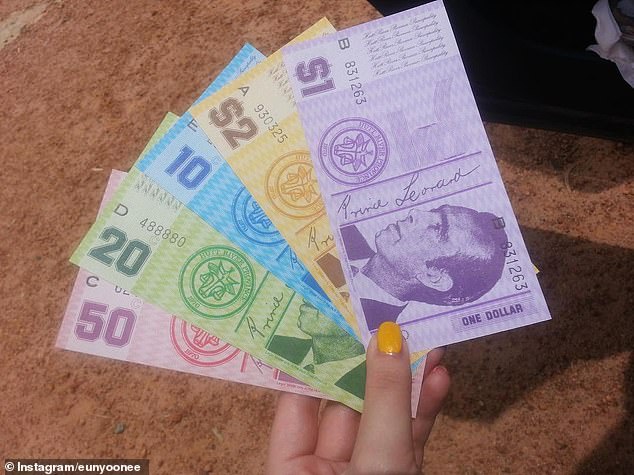 Banknotes also bearing his image. The currency is pegged to the Australian dollar for ease of use

Most of the Principality’s citizens are overseas – 14,000 of them – who hold passports that no other country recognises.

Prince Leonard’s farm still produces thousands of hectares of wheat along with ‘exporting’ wildflowers and a range of souvenirs.

Since 2010 visitors could stay overnight in an unpowered caravan park with 40 concrete bays, and play a round of mini golf at the ‘Royal Golf Course’.

The Principality’s seat of government, the ‘capital’ Nain, has an administration building where its business is conducted.

Inside are dozens of documents from the Principality’s formation and development, including some it claims legitimise its existence. 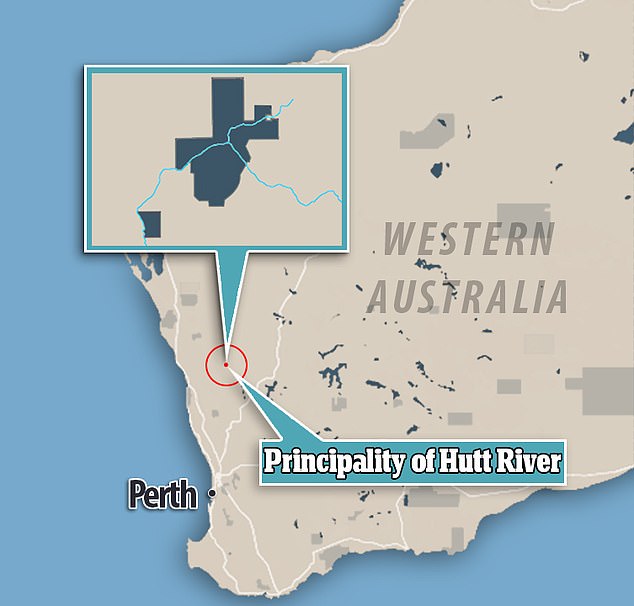 Despite the micro-nation’s remote location about 500km north of Perth, accessible only by a long dirt track, more than 40,000 tourists visit every year 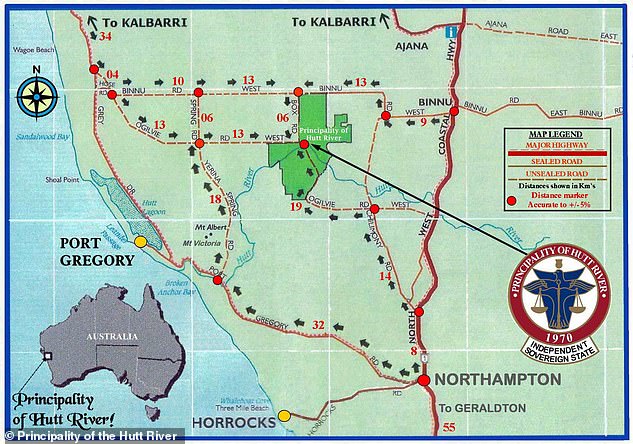 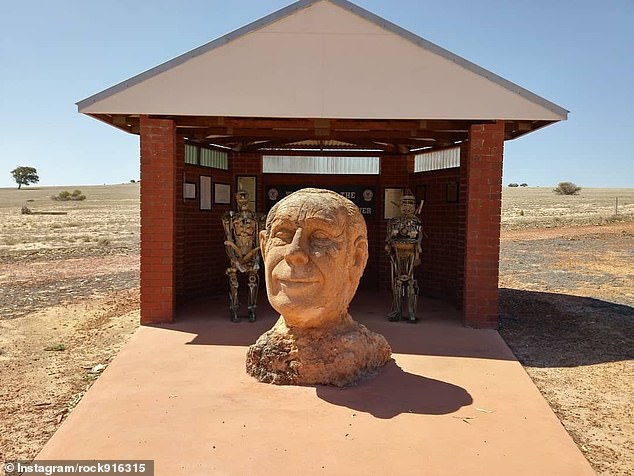 A huge rock bust of Prince Leonard, carved by hand with a small axe by Canadian artist Marc LeBuse, stands in front of a shed sheltering two ‘knights’ made from salvaged metal 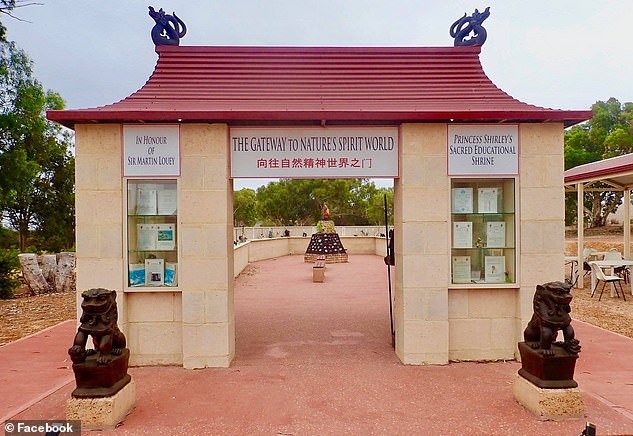 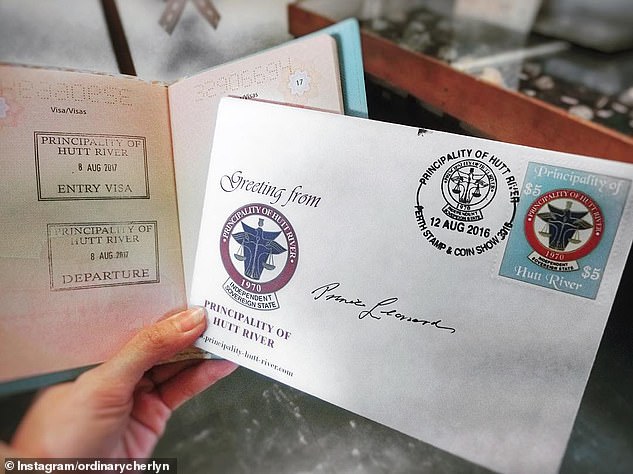 The history of the Principality of Hutt River

The Principality was formed in 1970 during a bitter dispute with the WA Government over wheat production quotas established in November 1969.

Prince Leonard’s farm had about 4,000 hectares of wheat ready to harvest but was only allowed to sell 40 hectares worth.

He and four other farmers on the Hutt River banded together to oppose the quotas they considered to be threatening their livelihoods.

Prince Leonard appealed to the Governor for help and when he did not respond he sued him for $52 million hoping it would force the quota to be increased. 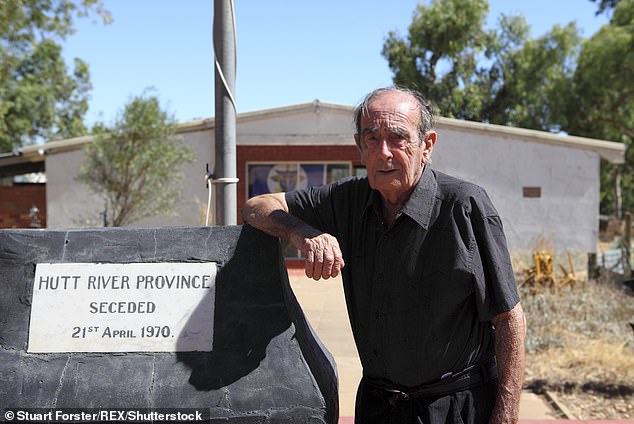 Two weeks later he claims the state government tried to compulsorily acquire his lands and he responded by declaring independence.

Because the government didn’t bother to challenge his declaration, he claimed that after two years Australian law meant he had successfully seceded.

A letter from the Governor-General’s office supposedly also referred to him as the ‘Administrator of the Hutt River Province’ which he claimed legitimised his secession.

He soon began calling himself ‘His Majesty Prince Leonard I of Hutt’ in the belief that that British Treason Act of 1495 would help his case.

Prince Leonard tried various bizarre legal manouvers to assert the Principality’s sovereignty – and exemption from Australian taxes – over the next half-century, with limited success. 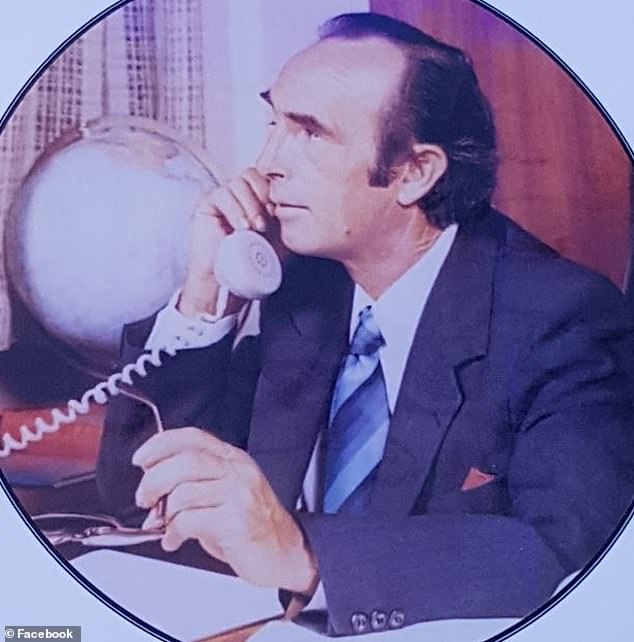 Prince Leonard tried various bizarre legal manouvers to assert the Principality’s sovereignty – and exemption from Australian taxes – over the next half-century, with limited success 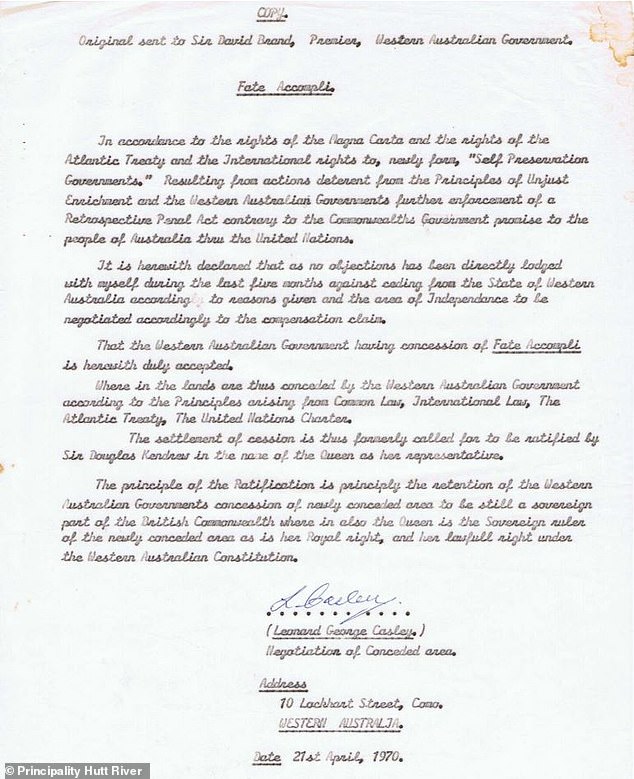 The declaration of independence on April 21, 1970, that began the Principality

They included declaring war on Australia for two days in 1977 to claim sovereignty as an undefeated party under the Geneva Convention.

One of the most highly-touted pieces of ‘evidence’ is a Department of Territories minute that calls the Principality a ‘legal entity’ and exempts Prince Leonard from tax, but the government said was forged.

‘The clumsy language, including a malapropian use of ‘a mute point’ gives it away for what it is, a poorly attempted forgery,’ the government said in diplomatic cables.

Prince Leonard has also lost several court battles with the ATO over unpaid taxes and been ordered to pay millions as a result.

He was first convicted in 1977 of refusing to give the ATO required documents, and again along with one of his sons in 2006 for failure to file tax returns.

The 2006 conviction was appealed to the High Court, who refused to hear it as the ‘arguments advanced by the applicants are fatuous, frivolous and vexatious’. 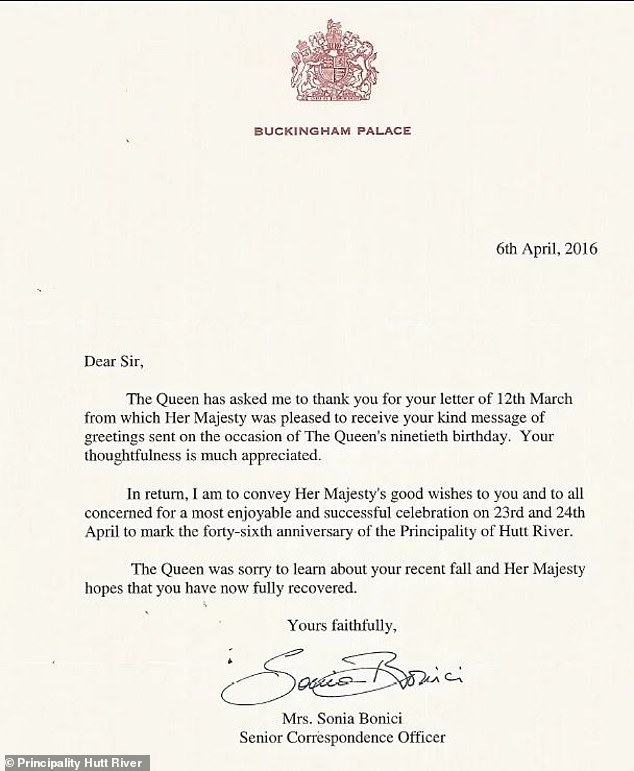 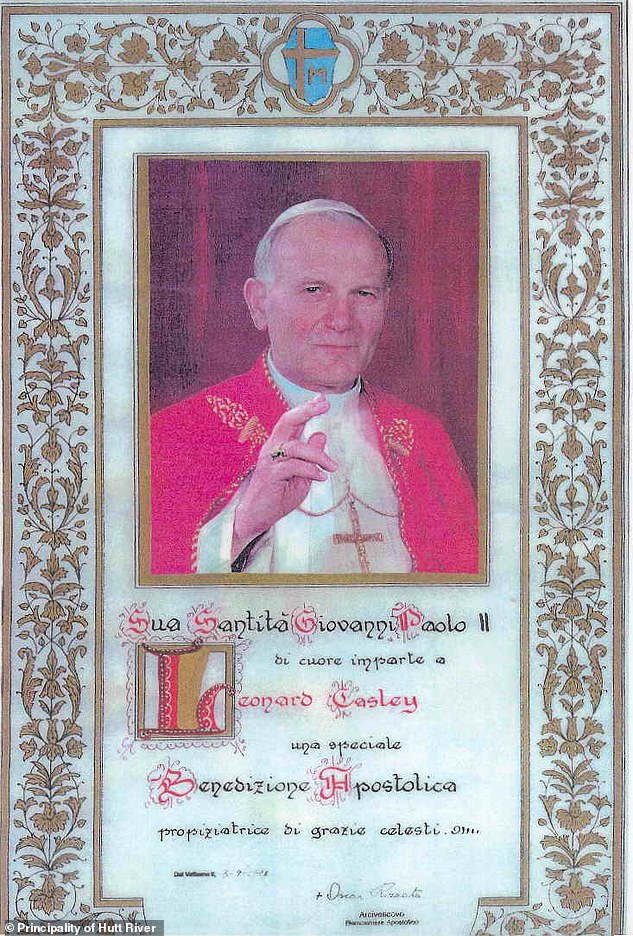 Prince Leonard claims to have received a papal blessing from Pope John Paul II in September 1998, posting purported copy of it on the Principality’s website

The pair again insisted they couldn’t be compelled to pay tax as the Principality was independent, but the WA Supreme Court dismissed this as ‘gobbledegook’.

‘Anyone can declare themselves a sovereign in their own home but they cannot ignore the laws of Australia or not pay tax,’ the judges wrote.

Overseas entities have been more willing to humour the the Casley family’s royal claims and bestowed several honours upon them.

The Queen in April 2016 sent a letter conveying her good wishes for the Principality’s 46th anniversary celebrations.

Prince Leonard also claimed to have received a papal blessing from Pope John Paul II in September 1998, posting purported copy of it on the Principality’s website.