Prisoners Of History review: Keith Lowe doesn’t come up with any easy answers

All around the world, statues are falling. In Britain it’s slave traders and colonialists who have found themselves at the bottom of rivers, or boarded up for their own safety.

Protesting Americans, meanwhile, have pulled down monuments to Confederate generals who fought for the slave-owning South during the Civil War. Heroes including Winston Churchill, George Washington and Christopher Columbus have all found themselves in danger of being reduced to rubble.

But what, really, are people doing when they take a sledgehammer to the physical past? 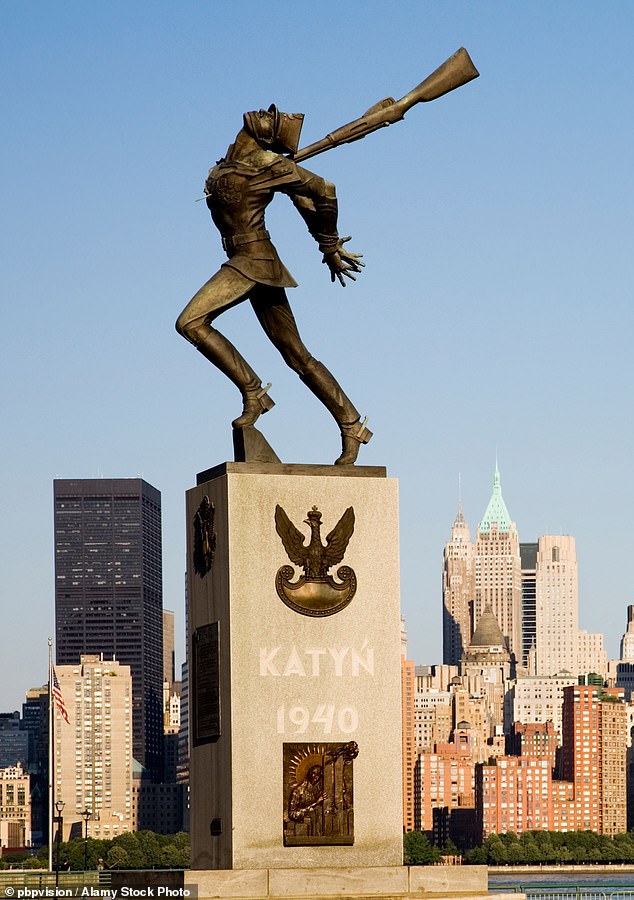 In Jersey City, Keith Lowe points out a graphic, almost obscene statue that commemorates a Polish officer being stabbed in the back by a bayonet (above)

In this brilliantly researched and timely book, Keith Lowe takes us on a tour of the monuments that were erected in the long aftermath of the Second World War. We see the figure of General MacArthur striding ashore to liberate the Philippines in 1944.

In Seoul, we are shown a large bronze figure of a young Korean girl with the curious name of The Peace Statue. In Jersey City, Lowe points out a graphic, almost obscene statue that commemorates a Polish officer being stabbed in the back by a bayonet.

And in London we visit the most recent of the Second World War memorials, Bomber Command in Green Park, an elaborate blend of Doric architecture and neo-classical sculpture.

So far, so heroic. But behind each of these monuments, says Lowe, there is a more complicated history. The MacArthur statue was put up by Ferdinand Marcos of the Philippines in the 1970s just at the point when the dictator needed to demonstrate how grateful he was to the US for propping up his regime.

Indeed, says Lowe, far from being a heroic liberator of South-East Asia, MacArthur spent much of the war safely tucked up in Australia. There’s a similarly knotty story behind the Peace Statue girl in Seoul.

She actually represents the thousands of Koreans who were sex-trafficked to become ‘comfort women’ for Japanese troops.

Lowe is not afraid to tread on sensitive ground, but he does so with the integrity that comes from really knowing his material. In a fascinating chapter on Auschwitz, he reveals how the museum and memorial site have been subject to constant negotiations.

In the 1970s, Polish Catholics felt that the fact that thousands of their people had perished alongside the Jews was being left out of the picture. In 1984, a group of Carmelite nuns established a convent beside the perimeter fence, a gesture that caused immense offence in some quarters.

Today, the World Heritage Site is so popular that tourists are herded through by guides in the same way that prisoners were hurried to the gas chambers. Is this deeply offensive or a positive kind of re-enactment and a sign that the Holocaust is in no danger of being forgotten?

Lowe doesn’t come up with any easy answers. But he does suggest that simply tearing down statues of people whose views no longer coincide with our own might be short-sighted.

While a monument still stands, it ‘holds us to account’. Once it has gone, we might be tempted to take the easy course of pretending that the more difficult bits of history never happened.

Do you find life stressful? You’re not alone. Even in normal times there’s no end of things to worry about – money, work, health, etc – and during a global pandemic everything seems that much worse.

Is stress a natural part of the human condition, or does it arise from how we lead our lives?

These are some of the questions scientist and broadcaster Adam Hart contemplates in this examination of how evolution has left us ill-equipped to deal with the modern world.

Is stress a natural part of the human condition, or does it arise from how we lead our lives? These are some of the questions scientist and broadcaster Adam Hart contemplates

Our brains and our bodies, and our emotional responses, developed in environments where food was scarce and mortal dangers lurked round every corner. Nowadays we don’t have too many man-eating predators to worry about, and if we feel peckish we can pop out to the supermarket, but we are still lumbered with the mental baggage of our caveman ancestors.

And that includes how we deal with stress.

Stress has an evolutionary purpose. If we bump into a bear or a tiger, the brain triggers a massive burst of adrenaline and we have a split second to decide between ‘fight’ or ‘flight’.

These days the bears and tigers are behind bars in the zoo, but the adrenaline floods in whenever we become anxious. The unhealthy levels of stress we suffer result in what Hart identifies as a ‘mismatch’ between our evolutionary history and the modern world.

Similar mismatches affect our responses to alcohol and gambling. The ‘drunken monkey’ theory suggests that our ancestors’ bodies adapted to digest fermented fruit because food was scarce.

Taking risks also had evolutionary benefits because of the potential rewards (caveman shorthand for food and sex). But our brains can’t easily cope with the temptations of excess alcohol or slot machines.

This book is a gripping and sobering reminder of how much we are all governed by our genetic inheritance. So much for free will.