Priti Patel has promised police will not break up family gatherings on Christmas Day despite vowing to crack down on lockdown rule-breakers.

The Home Secretary was responding to comments made by David Jamieson, West Midlands Police and Crime Commissioner, who had previously said officers would be forced to intervene over the festive period.

It comes just hours after Ms Patel ordered police chiefs to ramp up their enforcement of coronavirus restrictions as she warned the rule-breaking minority must not be allowed to ‘endanger’ the ‘law-abiding majority’.

But Tory MPs have urged ministers to halt any heavy-handed approach.

Responding to the claims on talkRADIO’s Drivetime show, Ms Patel said: ‘Of course the police will not be doing that.

‘That’s a minority view and that’s a police and crime commissioner expressing his own personal view and opinion.

‘I speak to policing leaders every day, across the country including chief constables, from the college of policing the NPCC, the real leaders out there that are directing and guiding and helping us put into regulation sensible and practical policing measures, that will keep the public safe in the long run.’

Mr Jamieson had previously told The Telegraph that officers would investigate reports of rule-breaking over the upcoming holidays.

He said: ‘If we think there’s large groups of people gathering where they shouldn’t be, then police will have to intervene.

‘If, again, there’s flagrant breaking of the rules, then the police would have to enforce. It’s not the police’s job to stop people enjoying their Christmas. 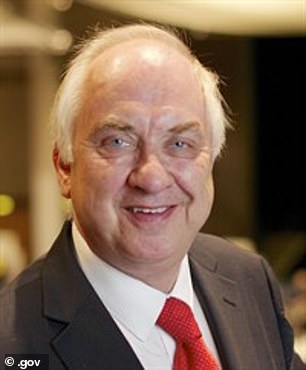 Senior Tory MP David Jones later said: ‘All people want is a quiet, happy Christmas with their families. They’ve had a dreadful year, so let’s give them a break.’

And his thoughts were echoed by former party leader Iain Duncan Smith who said: ‘It’s time for the Government to stand down these jobsworth Christmas turkeys.’

It comes after Ms Patel acknowledged that police officers have been ‘working flat out’ during the pandemic.

But she said the Government had provided forces with more resources and more powers and it is now time to ‘strengthen enforcement’ against people who ‘flout the rules’.

Her comments came as England prepares to be plunged into a nationwide lockdown from Thursday.

Meanwhile, Northern police have vowed to crackdown on the ‘minority’ who flout Covid rules and put ‘lives at risk’.

A group of senior police officials in the North of the country said they intended to take a ‘robust’ approach as a ‘minority seem incapable of following the rules’.

Boris Johnson has stressed in recent days that compliance with the Government’s Covid-19 rules will determine the effectiveness of the national shutdown.

Ms Patel told a meeting of the National Policing Board that Mr Johnson ‘has been clear that he wants to see tougher enforcement’ of the measures.

Addressing the meeting, which takes place four times a year to scrutinise the progress of the 20,000 police recruitment campaign and other policing matters, she said: ‘As our nation battles to suppress coronavirus I am acutely aware that we are asking more from our outstanding officers, and that they have been working flat out to keep people safe.

‘But the Prime Minister has been clear that he wants to see tougher enforcement of the necessary restrictions in order to save lives.

‘We have played our part – strengthening and simplifying the rules to make it easier for officers to act and providing an extra £60 million for enforcement, with £30 million going direct to the police.

‘We have empowered and resourced you to do more, and we now need you to strengthen enforcement, and that the law-abiding majority are not endangered by those who flout the rules.

‘I want to thank all of you for the contributions you have made in working through the new restrictions.’

She also said it is ‘crucial’ as the second national lockdown approaches that police look to use all powers available to them to tackle what she called ‘hidden harms’, like stalking, slavery and trafficking, sexual offences and domestic violence.

Ms Patel’s intervention came as police chiefs warned that people who ignore coronavirus rules should be prepared to ‘face the consequences of greater levels of enforcement’.

In an open letter, the chief constables of five forces in the north west of the country said they will ‘collectively target’ the minority of the public who flout the measures by holding large gatherings, music events and parties.

The message from the forces covering Cheshire, Cumbria, Greater Manchester, Lancashire and Merseyside comes after a period of tightened restrictions for much of the North West due to high numbers of Covid-19 cases.

Strict new rules are due to be rolled out for the whole of England from one minute after midnight on Thursday, as a new lockdown comes into force.

In their letter, the senior officers said they had seen first hand ‘the misery the pandemic has caused’ but had received ‘great support from the majority of our communities’.

They said their forces had taken a ‘very measured’ approach to enforcement and used a model of ‘engage, explain, encourage and only as a last resort, enforce’ in relation to issuing fines.

‘Sadly we have seen a minority right across the North West who seem incapable of demonstrating any civic responsibility and complying with regulations,’ the chief constables added.

They said the public wanted a ‘consistent and robust’ approach to enforcement and that the introduction of local restrictions had seen forces take a ‘firmer stance’ over restrictions and move more quickly to issue fixed penalty notices.

Ahead of a second national lockdown, they urged the public to continue complying with Covid-19 related rules.

They wrote: ‘We know how hard this is, but we need to maintain that shared purpose we had in the first lockdown to defeat the virus and, ultimately, save lives.

Addressing potential rule breakers, the chief constables added: ‘To the minority who feel the restrictions don’t apply to them be prepared to face the consequences of greater levels of enforcement.’

The police have the power to issue fixed penalty notices to people who break coronavirus rules, with fines starting at £200 and rising to £6,400.

Five Northern police chiefs have promised to crack down on the ‘minority’ who flout Covid rules and put ‘lives at risk’, on the eve of the second nationwide lockdown.

Chief constables Darren Martland of Cheshire, Michelle Skeer of Cumbria, Ian Hopkins pf Greater Manchester, Andy Rhodes of Lancashire and Andy Cooke of Merseyside said they will take a ‘robust’ approach as a ‘minority seem incapable of following the rules’.

The areas they cover have been hit the harshest by the Covid pandemic.

Having seen first-hand the ‘misery of the pandemic’ , the senior officers said in an open letter that they will move more quickly to fine those who are caught flouting the new rules.

And they warned organisers of parties and music events in particular that they would be targeted. 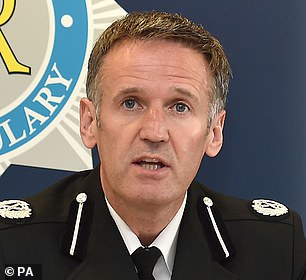 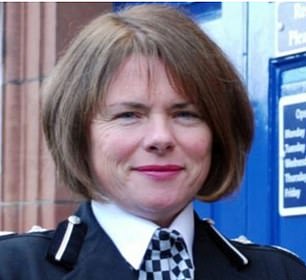 Merseyside and Greater Manchester have seen their coronavirus figures rocket over the past month.

There have been 226,023 confirmed cases of coronavirus in the North West of England since the start of the pandemic.

While the police chiefs commended those who have followed the rules, they said they will target those who put ‘lives at risk’ by hosting parties.

They wrote: ‘As the Police Chiefs responsible for the North West we have seen first-hand the misery the pandemic has caused, but we have also seen great support from the majority of our communities.

‘We have tried to ensure we have maintained the principle of policing with consent, that sets apart policing in this country from other parts of the world.

‘Along with police forces nationally, we have taken a very measured approach to enforcement from the start of the pandemic, recognising the restrictions placed on all our lives were unprecedented. 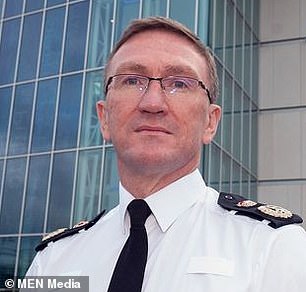 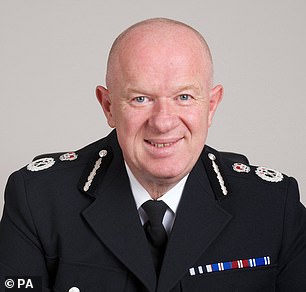 While the police bosses including Ian Hopkins of Greater Manchester (left) and Andy Cooke of Merseyside (Right) commended those who have followed the rules, they said they will target those who put ‘lives at risk’ by hosting parties

‘We used the 4E’s model of Engage, Explain, Encourage and only as a last resort Enforce, in relation to issuing Fixed Penalty Notices for breaching the Coronavirus legislation.

‘Sadly we have seen a minority right across the North West who seem incapable of demonstrating any civic responsibility and complying with the regulations.

‘We know from focus groups and regional insight work the majority of the public would wish to see the Police Service taking a consistent and robust approach to enforcement. 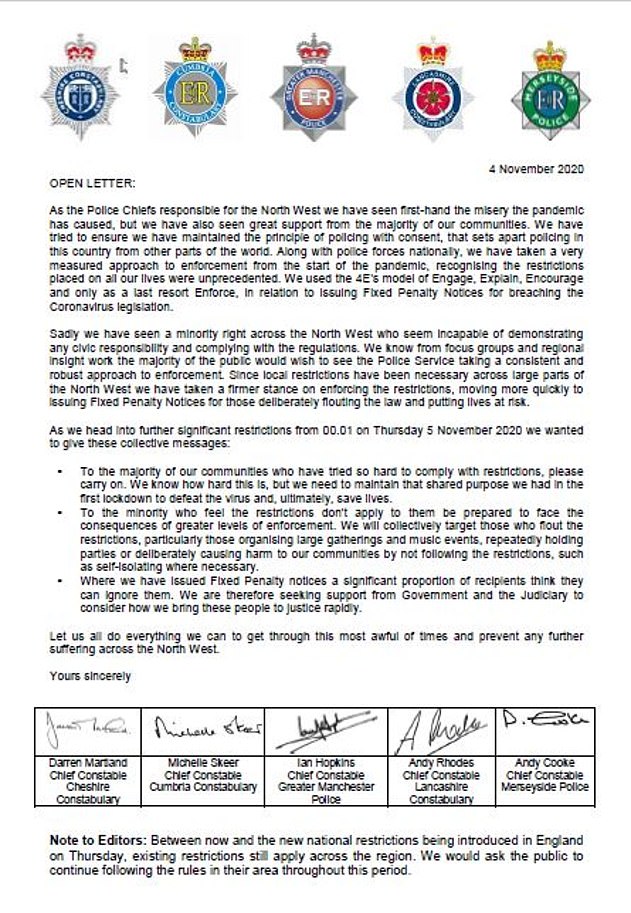 The open letter (pictured) has been penned by open by police chiefs from Cheshire, Cumbria, Greater Manchester, Lancashire and Merseyside, – areas which have been hit the harshest by Covid

‘Since local restrictions have been necessary across large parts of the North West we have taken a firmer stance on enforcing the restrictions, moving more quickly to issuing Fixed Penalty Notices for those deliberately flouting the law and putting lives at risk.

‘As we head into further significant restrictions from 00.01 on Thursday 5 November 2020 we wanted to give these collective messages.

‘To the majority of our communities who have tried so hard to comply with restrictions, please carry on. 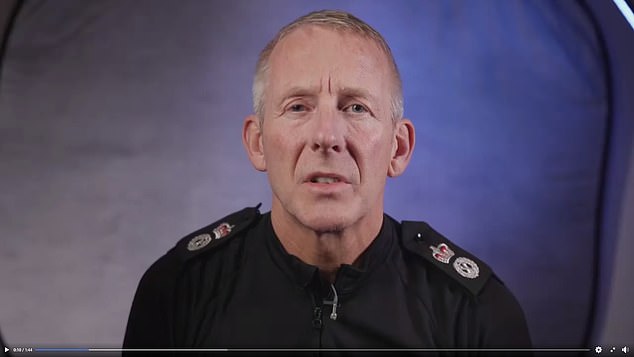 Covid figures have sky rocketed in the North West of Enghand including the area covered by Andy Rhodes, (pictured) Chief Constable Lancashire Constabulary

‘We know how hard this is, but we need to maintain that shared purpose we had in the first lockdown to defeat the virus and, ultimately, save lives.

‘To the minority who feel the restrictions don’t apply to them be prepared to face the consequences of greater levels of enforcement.

‘We will collectively target those who flout the restrictions, particularly those organising large gatherings and music events, repeatedly holding parties or deliberately causing harm to our communities by not following the restrictions, such as self-isolating where necessary.

‘Where we have issued Fixed Penalty notices a significant proportion of recipients think they can ignore them.

‘We are therefore seeking support from Government and the Judiciary to consider how we bring these people to justice rapidly.

‘Let us all do everything we can to get through this most awful of times and prevent any further suffering across the North West.’