The Quantico star looked red hot in two sneak peek images shared by Vogue on Thursday morning for their January 2019 issue. The 36-year-old actress wore a red and gold dress in the stunning photo shoot by fame shutterbug Annie Leibovitz.

And in her bombshell interview, the pinup relayed many new details about her romance with Jonas as they head into their Saturday wedding.

Jonas and Chopra will have two ceremonies—a traditional Indian wedding and a Christian service officiated by Jonas’s father.

Each one will be ‘held in different spots at the palace in Rajasthan.’

There will be three days of celebration. ‘People will need vacations after this wedding,’ Chopra joked.

‘Two very different cultures and religious backgrounds, and the beauty of it was, there was so much love and acceptance for our side.’

‘Nick’s mother thinks she was Indian in a past life,’ Chopra added. ‘She rocks a sari.’

Chopra will wear a custom gown by Ralph Lauren, Vogue revealed. And Jonas ‘will dress like royalty, as is customary—turban, sword—and he’ll ride in on a horse.’

‘Are you comfortable on a horse?’ Chopra asks during the interview as if she had not considered before that he may not be able to ride.

Jonas and Chopra ‘will walk around a fire seven times, once for each of the seven lifetimes they will spend together.’

Jonas thinks they’re on their third or fourth lifetime together but he added, ‘I’ll take seven more.’

The beauty also detailed the proposal, which shocked her. He took her to Crete and she thought it would be a birthday trip.

It was also shared that the singer shut down a Tiffany & Co in London to find her ring and he took it with him.  ‘I got down on one knee, again, and I said: Will you make me the happiest man in the world and marry me?”’Jonas said. ‘No joke—she took about 45 seconds. Forty-five seconds of silence.’

Chopra said she was speechless.

‘I’m going to put this ring on your finger now unless you have any objections,’ he said. 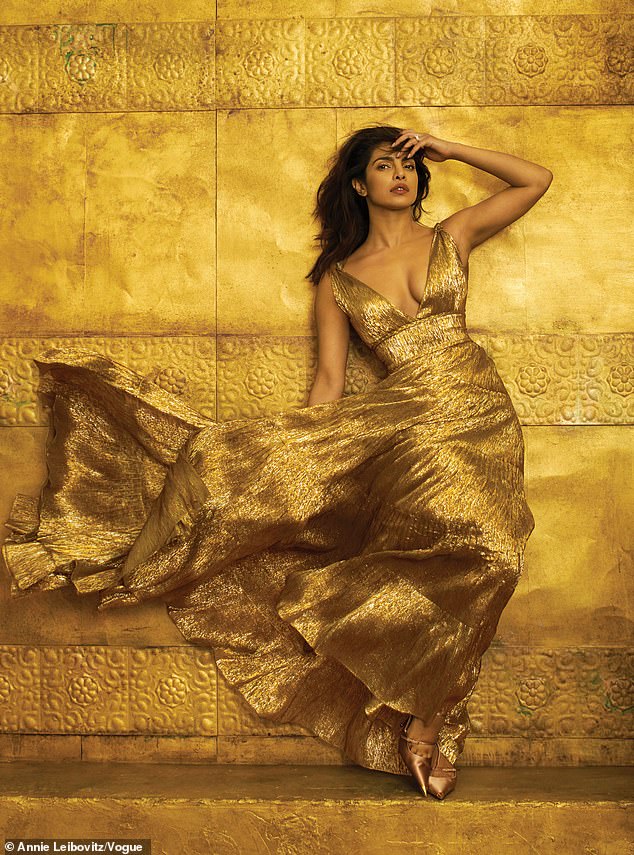 Love, love, love: The article was titled When Priyanka Met Nick: A Love Story. And in the interview, she mentioned when she first fell for Nick. She was on a date in LA.with Jonas and he said, ‘I love the way you look at the world. I love the drive you have’

The roka took place in August. ‘It was such an incredible coming-together of two really ancient cultures and religions,’ Chopra said.

‘Nick did the Hindu prayers,’ Chopra said. ‘The prayers are in Sanskrit. Even I can’t say them. But he did it in Sanskrit. The Indians were so impressed with their National Jiju.’

The Vogue article was titled When Priyanka Met Nick: A Love Story. And in the interview, she mentioned when she first fell for Nick.

She was on a date in LA with Jonas and he said, ‘I love the way you look at the world. I love the drive you have.’

She added, ‘As a girl, I’ve never had a guy tell me, “I like your ambition.” It’s always been the opposite.’

The former teen heartthrob also talked about when they met at an Oscar party –  he made a scene: ‘I put my drink down… get on one knee—this is in front of a bunch of people—and I say, “You’re real. Where have you been all my life?” Like, loud.’

And both she and Jonas detailed how they first started talking. ‘It was Nick who sent the first message,’ Chopra said.

But there is a story behind that. He sent a text to Graham Rogers, Chopra’s costar on Quantico, that read: ‘Priyanka. Is. Wow.’ 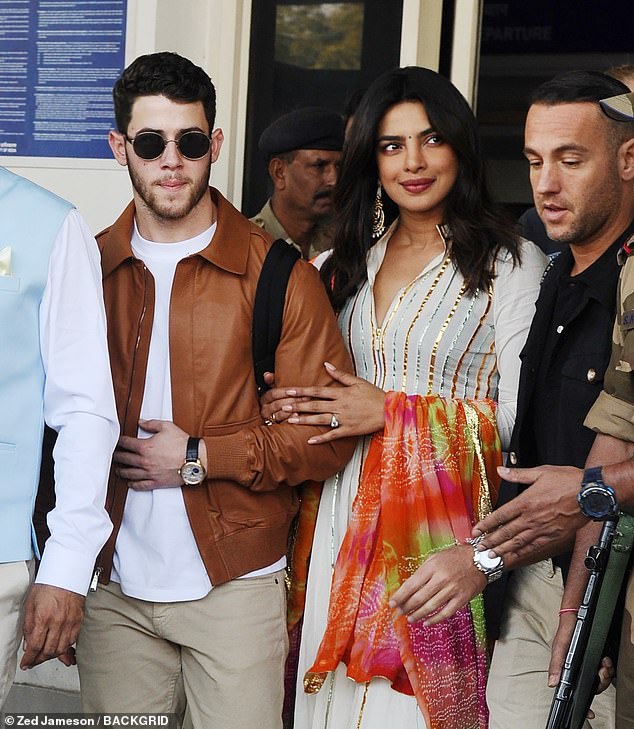 Ready to say I do: The stars were seen arriving in Jodhpur, India on Wednesday

But he said that is not the way he talks.

Then he sent a direct message to her on Twitter: ‘I’m hearing from a few mutual friends that we should meet,’ the note said.

He then asked her out and gave a date: September 8, 2016. ‘She responded day of with a message that said, “My team can read this. Why don’t you just text me.”‘

Chopra laughs, ‘Boy got the number!’

‘We hung out for a couple of hours,’ Chopra says of a date. ‘He patted my back before he left.’

‘There was a back pat,’ Chopra says.

‘She’s still upset about that.’

‘Your mom was in the house!’ Jonas said. ‘I thought it was a respectful first night.’

‘It was too respectful if you ask me.’

The reporter also talked to Nick’s brother Joe who was there with his fiancée Sophie Turner. ‘I think she kind of knocked him off his feet. He was just this little puppy dog,’ Joe said.

‘He’s sitting on the floor. And Sophie and I were just laughing at him. We’re like, Look at this little smitten, drunk kid right now.’

And also in the interview she said Nick has brought out a new side to her: ‘I’ve had that rule my whole life. Never publicly acknowledge a relationship. Ever. … What is happening? I’ve not known myself like this. This guy turned me into such a girl! If I could blush, I’d be tomato red right now.’

‘It’s the idea of it that I love for India,’ she noted. ‘It’s empowering girls to take control of their futures. You want a career? Go online; pursue the person you want to meet. Choose the kind of guy you like.’